Community engagement has emerged as a major focus for companies as they look to harness the power of their core user base and loyal “super fans.” But in a world filled with myriad touchpoints such as Slack, Twitter, Discourse, or GitHub, it can be difficult to keep on top of things, identify who the most engaged users are, and what keeps them coming back. And that is why San Francisco-based Orbit is setting out to fix what it calls “community data chaos.”

Founded in 2019, Orbit gives companies a collective view of their community, including insights into what platforms and individual members are displaying the most engagement, in terms of recency, frequency, and impact.

“Companies are beginning to understand the strategic value communities can create for their business, but given the distributed nature of communities today, they have no idea what’s working and what’s not across all those channels,” Orbit CEO Patrick Woods told VentureBeat. “For the first time, Orbit gives them a complete view of their community across all tools and platforms where they’re active and equips them with tools to proactively engage critical segments.”

Orbit was available in beta before now, but the platform officially launches today with $15 million in funding from Coatue, Andreessen Horowitz, Heavybit, and Harrison Metal.

Orbit is aimed at anyone whose job it is to manage and maintain a community — this could be developer relations, such as an open source project maintainer tasked with attracting more contributors, or a general community manager.

“Individual contributors like community managers and developer advocates use Orbit daily to proactively build their community,” Woods said. “Folks on leadership teams, like directors of community or VPs of marketing, use Orbit’s reports and data to power decision-making across the company.” 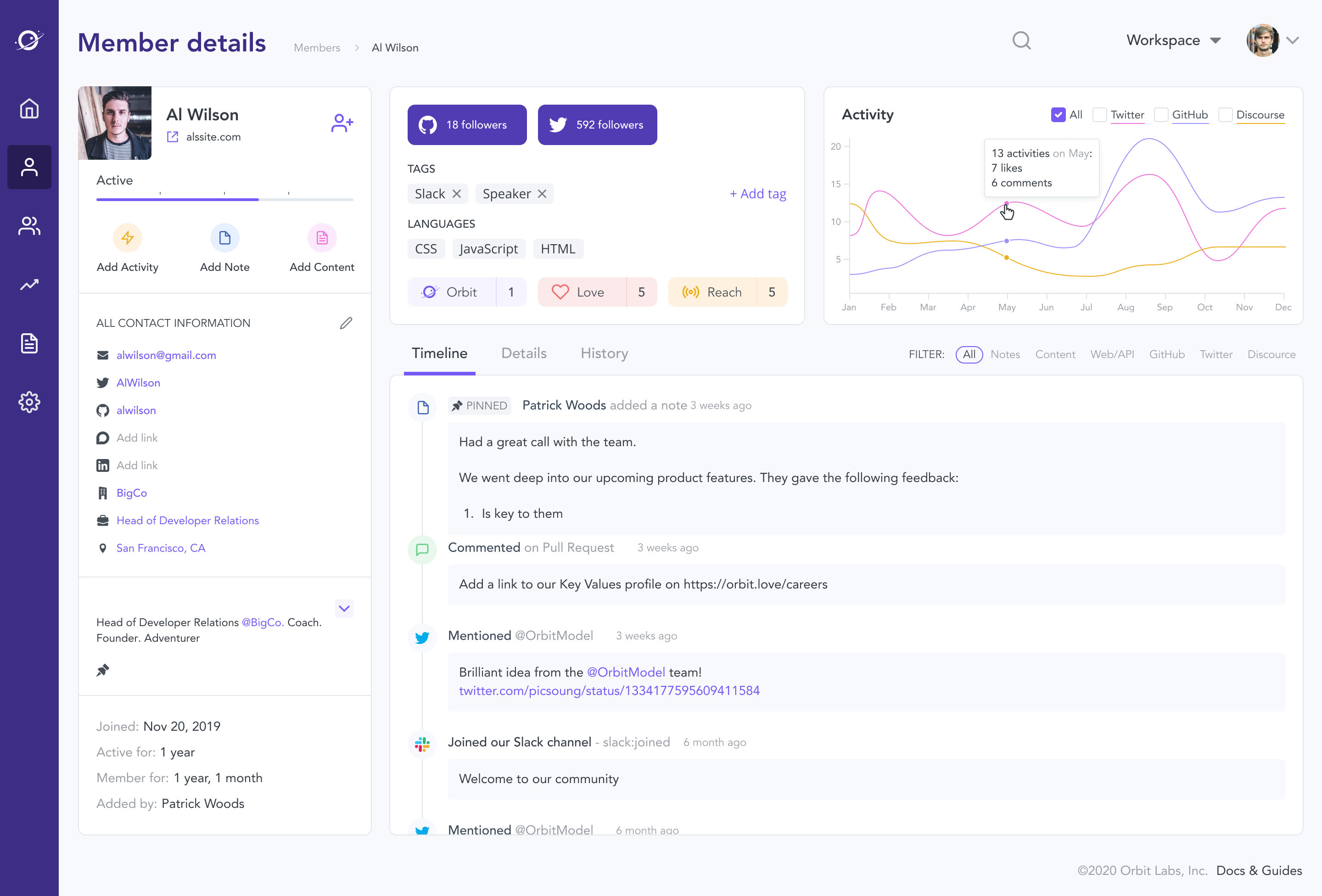 So, what kind of actionable insights can companies glean from Orbit? Well, it can help identify newcomers to a community, enabling managers to target specific individuals with a direct reachout, for example, or it can surface who the big champions are and who brings real value.

More broadly, Orbit data can help inform where in-person events should be staged or what topics the community is most interested in, while it can highlight potential new sales leads or identify marketing case studies. 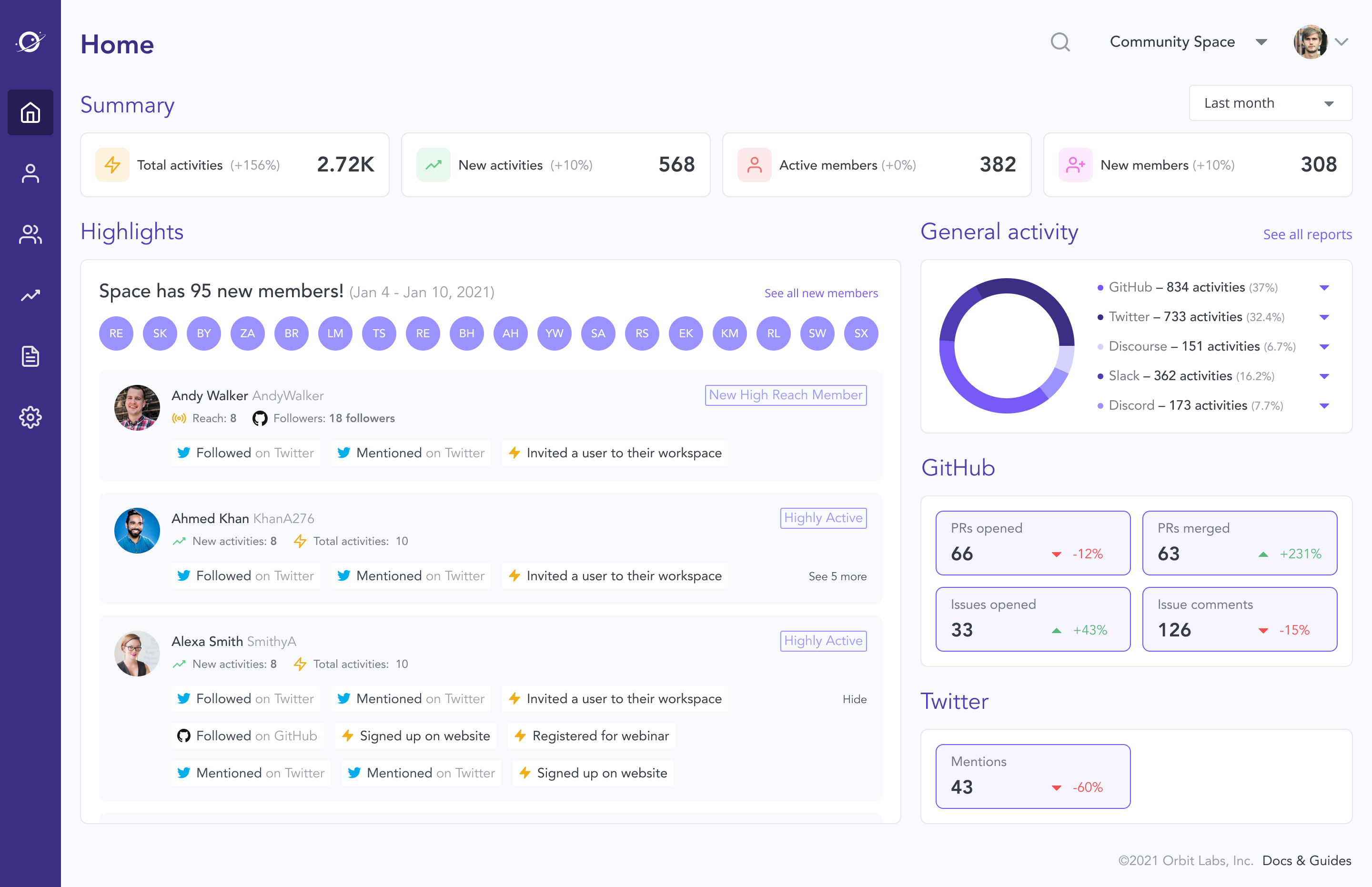 Out of the box, Orbit integrates with Discord, Discourse, GitHub, Twitter, Slack, N8n, and Zapier, the latter enabling some 3,000 more app integrations. However, Orbit touts its “API-first” approach, with popular third-party integrations including YouTube, Twitch, Stack Overflow, Notion, and LinkedIn, which collectively can help track the evolution of each community member across all platforms.

“Using our API, many of our customers also track product milestones in Orbit, letting them see in a single place a person’s journey from community member to product user,” Woods added.

In the future, Woods said that Orbit will develop further integrations based on demand (the company actively solicits feedback from its own community), which may include CRMs, data warehouses, and other community platforms.

Developer-focused companies are a major target market for Orbit, with current customers including API-development platform Postman, CI/CD platform CircleCI, Elasticsearch developer Elastic, and GraphQL developer Apollo. However, it can be used by any company that needs to monitor and report on their community engagement.

“Developer communities are undoubtedly central to our experience, but we’ve seen increasing adoption from communities of all types over the past several months,” Woods said. “I think that’s because the challenges of distributed communities are universal — wrangling different data from multiple platforms, working across numerous tools, having no single pane of glass into the community. Community managers exist in a state of reactionary fire-fighting, and their bosses don’t know what’s working and what’s not.”

Ultimately, Orbit is about measuring impact: helping community managers or developer relations teams demonstrate the success (or lack thereof) that their efforts are having on the company’s bottom line.

“We’ve built Orbit as a kind of mission control for communities for precisely this reason, to help community teams act proactively and strategically while informing the whole company on the impact and ROI of the community,” Woods said. 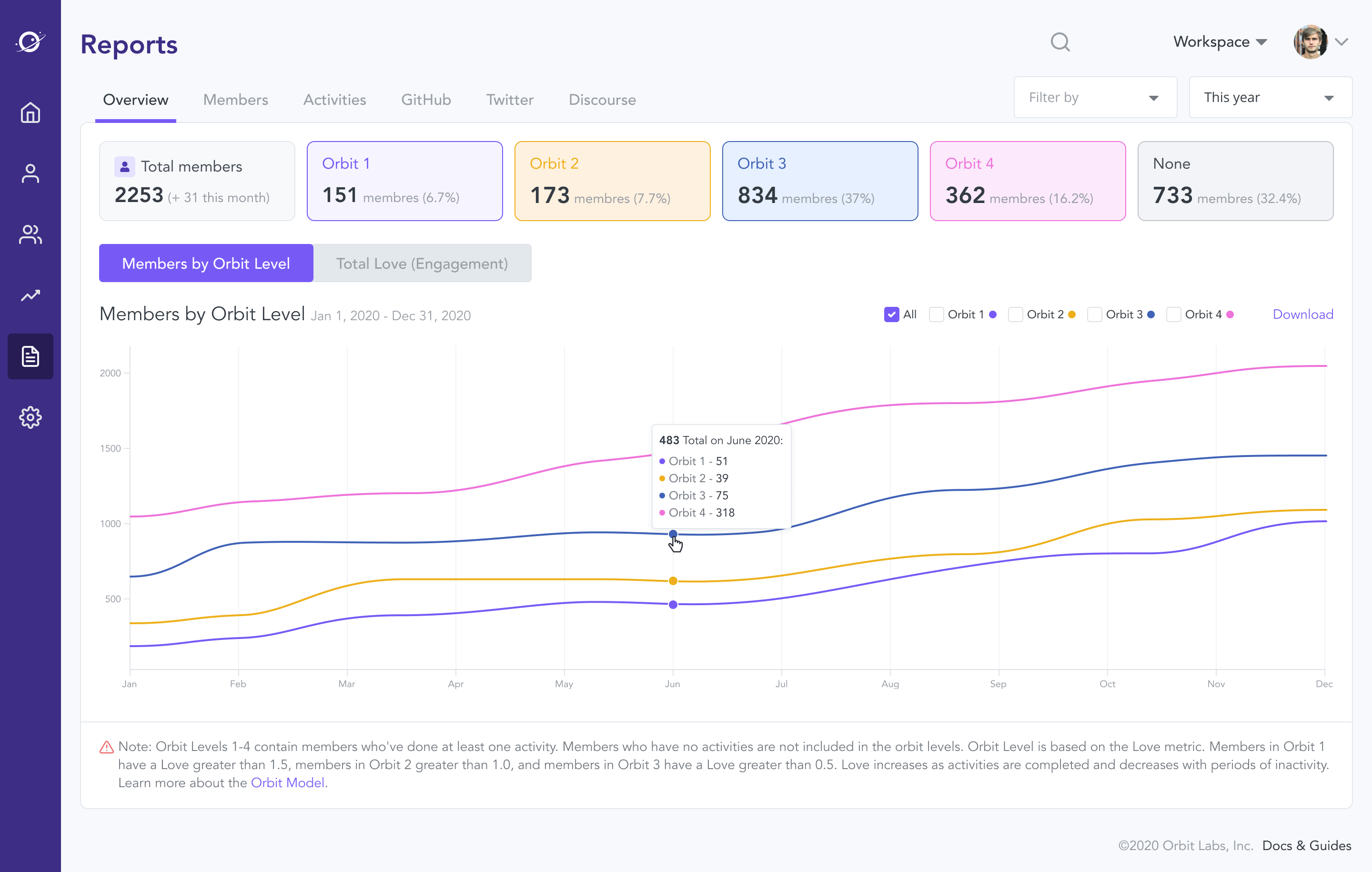 A quick peek elsewhere reveals a flurry of activity across the community management landscape. Back in February, Commsor raised $16 million for a similar proposition, while shortly after Common Room locked down $52 million in funding. Orbit, for its part, raised $4 million back in December, and another $15 million today.

So what’s driving this demand? According to Woods, it comes down to how software is now consumed, while the global pandemic has also played its part.

“The way people buy software has changed,” Woods said. “Software is no longer sold — it’s adopted, as demonstrated by the rise of product-led growth and bottom-up go-to-market. COVID made companies, who could no longer drive sales at in-person events, keenly aware of this new reality. Community has been important to humans for a long time, but only these recent trends have shifted the zeitgeist to the point that businesses have come to see community as a strategic driver of value.”

Citing anecdotal evidence, Woods pointed to conversations that Orbit has had with its own customers, whose investors — or potential investors — have asked about their approach to community management and their strategies for growing it.

“This is a significant shift from only two or three years ago, when roles like community and developer relations were seen by many as a nice-to-have effort, secondary to traditional sales and marketing teams,” Woods added. “The great news is that when companies truly invest in community building, it means they’re focused on creating value from people, not just capturing — which we think is a long-term net positive for society.”