Shovel Knight Dig wasn’t the only shovelry themed game available at Yacht Club Games’ PAX East booth this year. Announced just days before the convention, Shovel Knight Pocket Dungeon is a wildly different take on the character from anything seen before. Dig might bear a resemblance to a platformer, but Pocket Dungeon shifts completely to more of a Tetris or Puyo Puyo vibe instead of sticking to previous conceptions of the character.

Similar in fashion to Dig, Pocket Dungeon has some roguelike elements to it. Death will reset your run and any items/upgrades grabbed during your playthrough will need to be regained in subsequent attempts. It can be offputting to some, but those random elements propel an otherwise rudimentary puzzle game into something with tactical depth. Now you need to plan your movements to maximize loot drops and better prepare for boss battles.

The biggest thing I saw attendees struggling with while playing Pocket Dungeon was combat. Using a bump style where you’ll smash Shovel Knight up against foes, enemies will trade blows with you for every move. With only five hit points from the start, that means any enemy with a larger health bar will potentially kill you before you can even down them. This forces you to move around the puzzle grid and let enemies stack up together so you can take out entire groups of them at once. 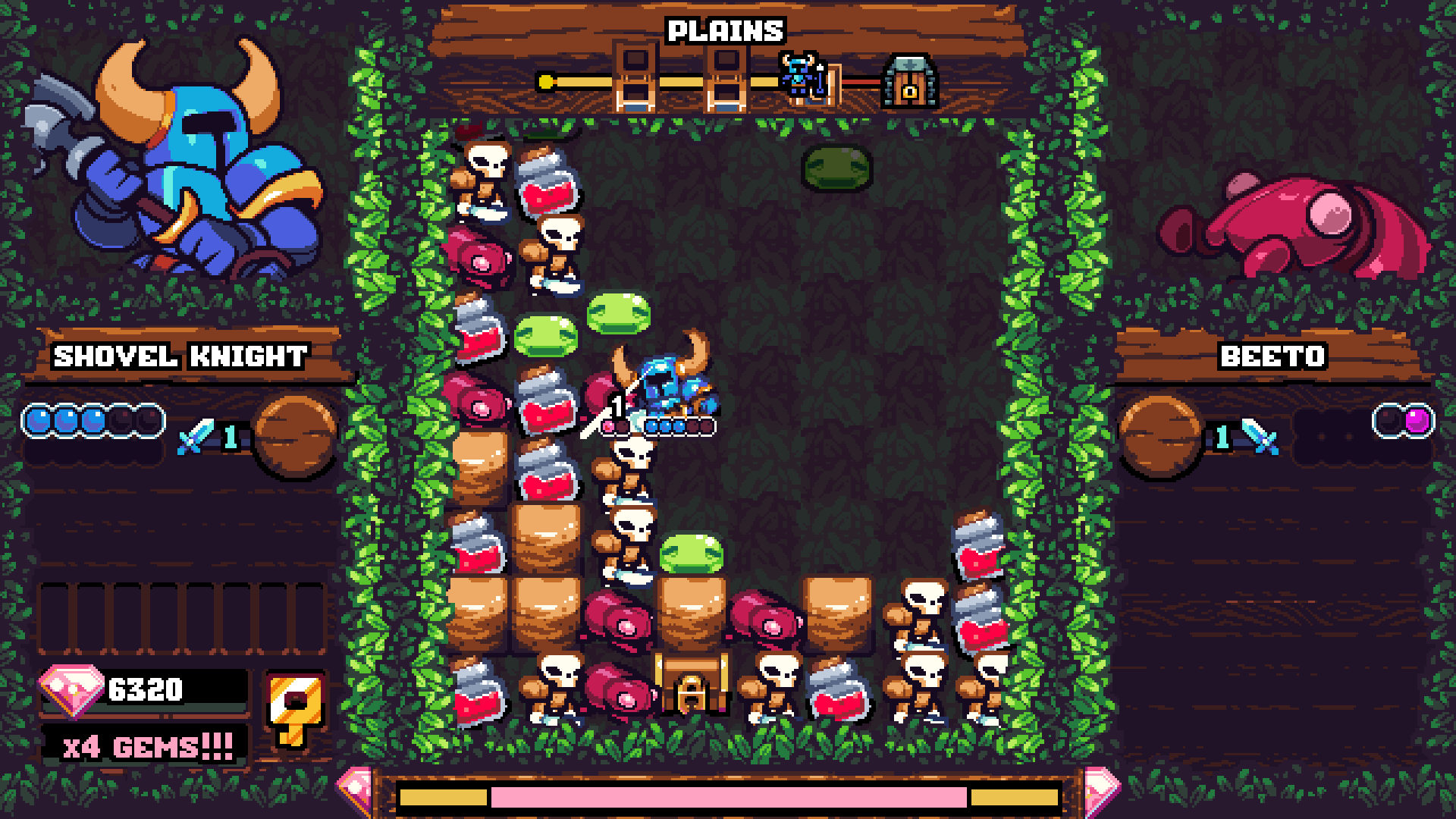 You’ll still need to retreat to heal, though, and that’s where you’ll bump into potions and turkeys. It’s a give and take where you’ll see about 15 skeletons stacked together, but may not have enough health to deal with them. Now you’ll have to quickly navigate to a potion and back to the skeletons before a dirt block or different foe lands on top and blocks your path. It can get intense, but the main problem is that Pocket Dungeon never makes it clear if stacking enemies is beneficial to you.

Boss fights work similarly. The demo had a couple of them present, but I managed to tango with Plague Knight. He’s got a massive health bar of about 12 hit points, so you clearly cannot tackle him in one go. You’ll need to maneuver around the board, dodging his bombs and avoiding smaller enemies to find potions and resume the attack. At times, you won’t be sure if you’re doing things correctly and I never assumed I died on the fight as it ended. Some extra clarity is all Pocket Dungeon needs to feel right.

Anyone familiar with the main Shovel Knight will see references to Yacht Club’s classic all-around Pocket Dungeon. One item you can unlock looks similar to the Troupple King’s chalice and that gives you health. Another is like the throwing anchor, granting you a ranged attack item. It’s neat to see all of these callbacks thrown in, legitimizing this as more than just Shovel Knight in another genre for the hell of it. 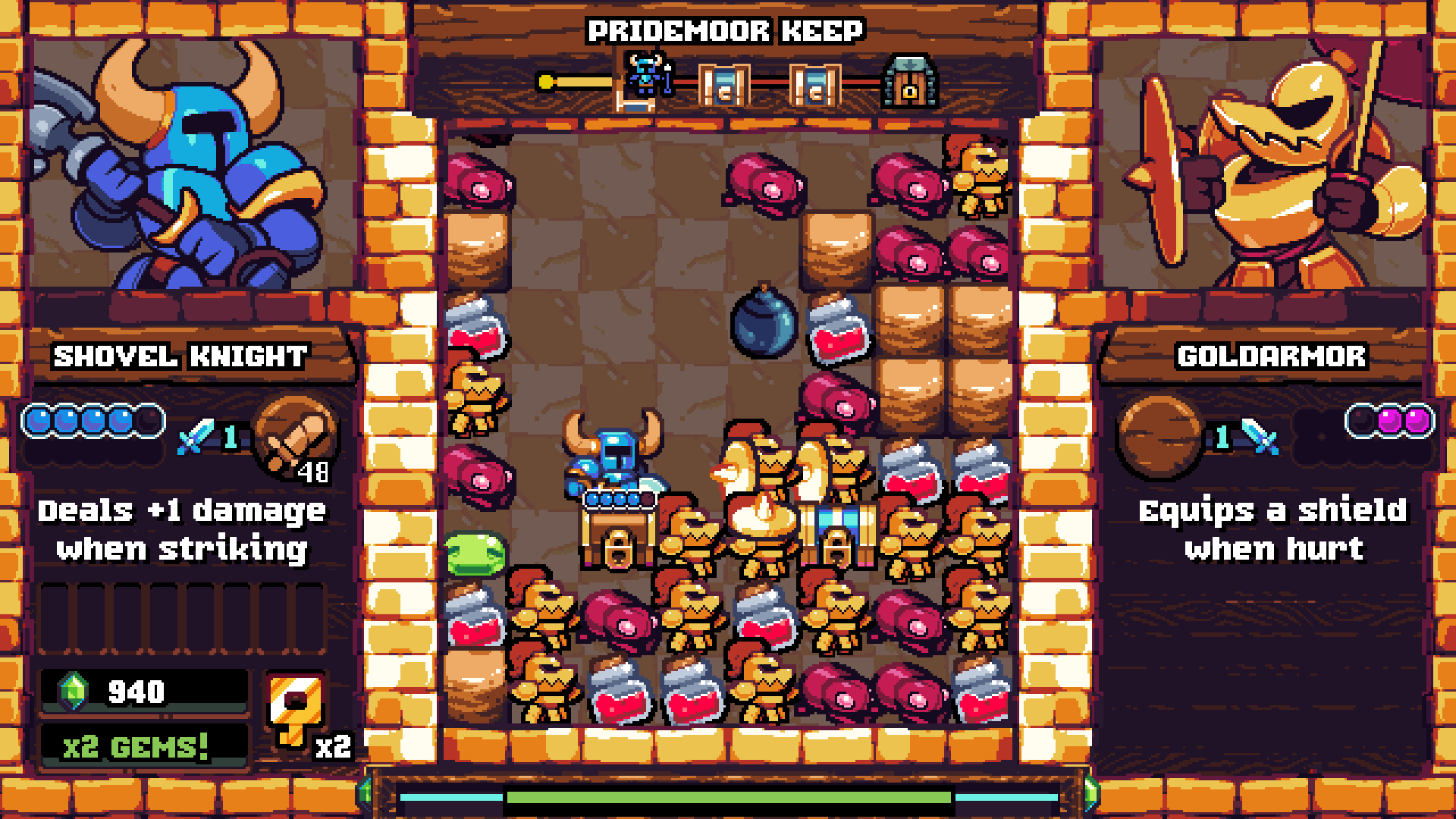 You can find these items during the main levels by collecting keys and opening chests. You’ll still need to navigate around enemies to grab these, but it creates a fun challenge to go for stronger upgrades while potentially getting backed into a corner that you won’t be able to fight out of. It’s maybe not self-explanatory, but you’ll fall into a rhythm as you play more.

After the initial announcement, I wasn’t quite sure Pocket Dungeon would be for me. Now that I’ve had some hands-on time with it, I’m confident this is a good angle. Puzzle games usually suffer from being highly derivative of a single idea (look at the number of Bejeweled clones that exist), but Pocket Dungeon has managed to mash-up different characters and ideas together into a cohesive whole. It’s a lot of fun and I’m curious to see where Yacht Club will be taking this.

Related posts:
03/02/2020 News Comments Off on PAX East 2020: Shovel Knight Pocket Dungeon Is Fun, But Could Use Some Clarity
Hot News
World of Warcraft: Dragonflight – Enhancement Shaman Complete Guide
This Week In Pokemon: Scarlet & Violet Patch, Kissing Meowscarada, And More
The Callisto Protocol Has A PUBG Easter Egg, Despite It Being Removed From The Canon
Dragon Age: Dreadwolf Is Still "Deep In Development"
Sonic Frontiers’ Combat Nearly Became Like Bayonetta And Devil May Cry
Recent Posts