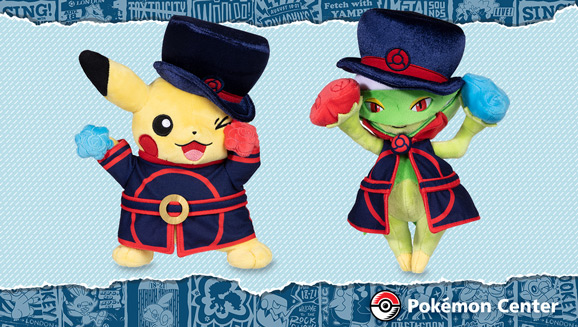 Exclusive Pikachu and Roserade plush toys will be sold at the London pop-up store, but you’d best get there as early as possible.

With the Pokémon World Championships taking place in London this year (which was meant to happen in 2020 but was cancelled due to the pandemic), an in-person Pokémon Center pop-up store will also be open throughout its duration.

Since there’s a dedicated online store now, exclusive merchandise was promised to incentivise people into visiting, even if they don’t plan to stick around to watch any of the tournaments.

The Pokémon Company has now revealed what that exclusive merchandise is: two costumed plush toys of franchise mascot Pikachu and Diamond & Pearl’s Roserade that dresses them up as Beefeaters.

We suspected that the 2019 London Pikachu plush would make a comeback considering its popularity, but there’s no word on that. So, if you missed it the first time, you’re probably not getting a second chance this year.

These two new plushies will also likely sell out quickly and the store itself seems to expect exactly that, as there will be timeslot reservations and a virtual queueing system.

In case you’re wondering, no, neither plushie will be made available on the online store. The only way to get one is to visit the pop-up store at the ExCeL stadium.

The queues in 2019 could get up to five hours long and the exclusive Pikachu kept selling out early each day, so you’ll want to get to the store as early as possible if you’re especially eager.

Although the championships don’t start until August 18, the store opens a day earlier on Wednesday, August 17 from 12pm to 7pm, according to the official Pokémon website.

We don’t know how much they’ll cost, or if the store will enforce a limit on how many one person can buy. We imagine they will in order to mitigate scalping, which has become a problem with Pokémon products.

Last year, limited edition trading cards that came with McDonald’s Happy Meals led to people buying a bunch of them in bulk so they could sell the cards online.

Even now, you can still find the 2019 London Pikachu plush on eBay for upwards of £320.