One of the many beloved series produced by video game company Valve, the Portal series, is considered the successor of DigiPen Institute of Technology students’ Narbacular Drop (2005). The original team who created the independent game was hired by Valve, and the cult classic Portal was born soon after.

The huge success of the game (originally released in The Orange Box) led to a highly anticipated sequel that did not disappoint. Portal 2 (technically in the first-person shooter category) may well be an instance where a video game’s sequel is superior to the original, and in all the right ways (you know a game is loved when it accumulates many fan theories). One of the most praised aspects of both games is the soundtrack, with Portal 2’s soundtrack having an official, 3-album release of its OST. Let’s honor Aperture Science by counting down the 10 most listened to songs on Spotify. 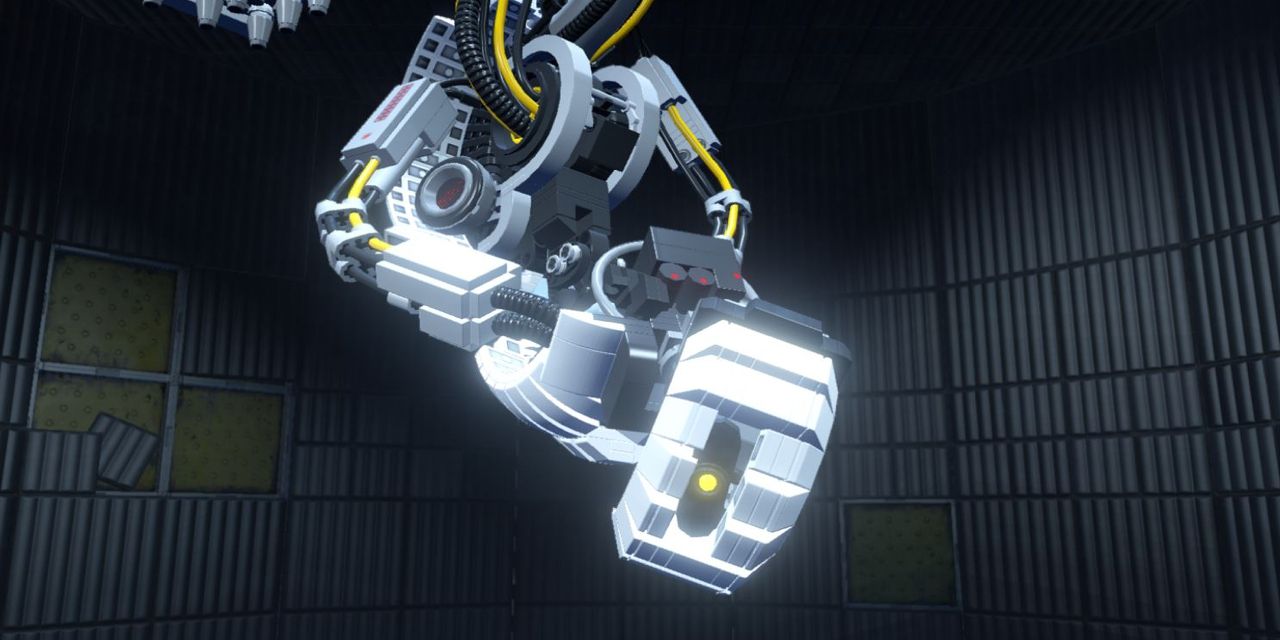 This song is perhaps the least well-known of songs sung by GLaDOS (or Ellen McLain), as it was written as the ending song for the LEGO Dimensions: Portal 2 Level Pack. Written of course by the talented Jonathan Coulton, this melodic tune is a surprisingly honest admission of feelings by GLaDOS, though it has no shortage of jabs and jokes either.

While GLaDOS brags about her friendship with Batman, she acknowledges the weight of the relationship between herself and Chell, saying “What we had, finally I understand.” She also insists she is absolutely fine without Chell, and that she forgives “you monster.” Though Portal 3 will likely never be a reality, this song acts as the closer to a trilogy that almost was. 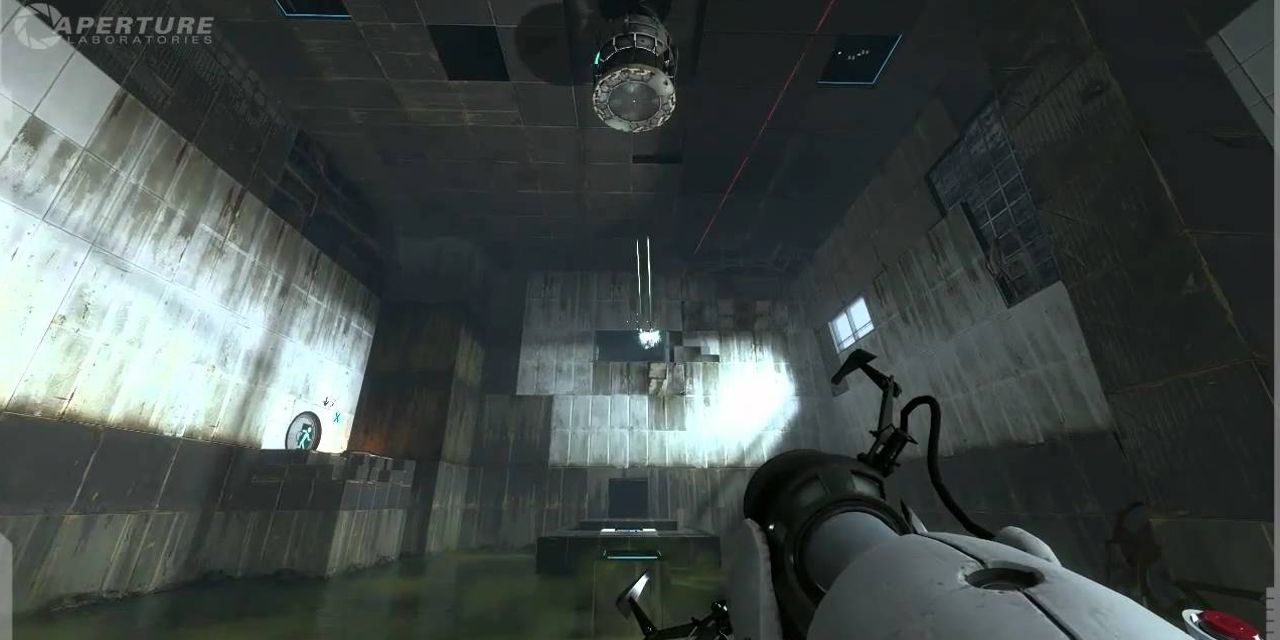 An instant classic of Portal 2’s majority instrumental soundtrack, the Faith Plate is one of the early Aperture Science testing inventions within the game, introduced during GLaDOS’ levels throughout the overgrown test chambers of Aperture.

Who doesn’t like flying through the air? With the addition of the Long Fall Boot, Chell can jump or fall from any distance without dying or taking any fall damage, a major improvement from the original game. This makes the Aerial Faith Plate a “relatively safe testing device”, also similar to the Repulsion Gel. 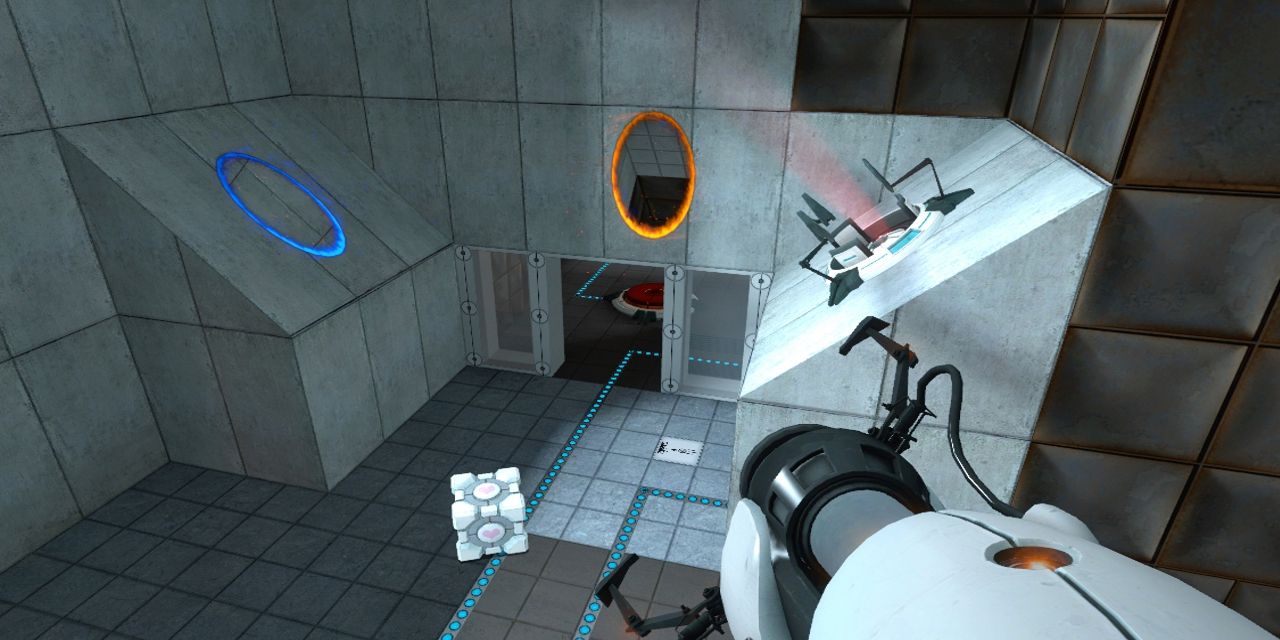 One of Portal’s many haunting but compelling tracks, the calmness of “Self-Esteem Fund” only highlights how alone and empty Aperture Science (and perhaps by extension, Chell) really is. The intense reverb and echoing synths seem to blend into one another endlessly, creating a sound quite sad, yet melodic.

The Portal soundtrack was composed by Mike Morasky and Kelly Bailey and is typically described as dark ambient music, with “Self-Esteem Fund” being no exception. With half a million listens on Spotify as of right now, it is the only instrumental track from Portal in the top 10 most listens of Aperture Science Psychoacoustics Laboratories’ Spotify. 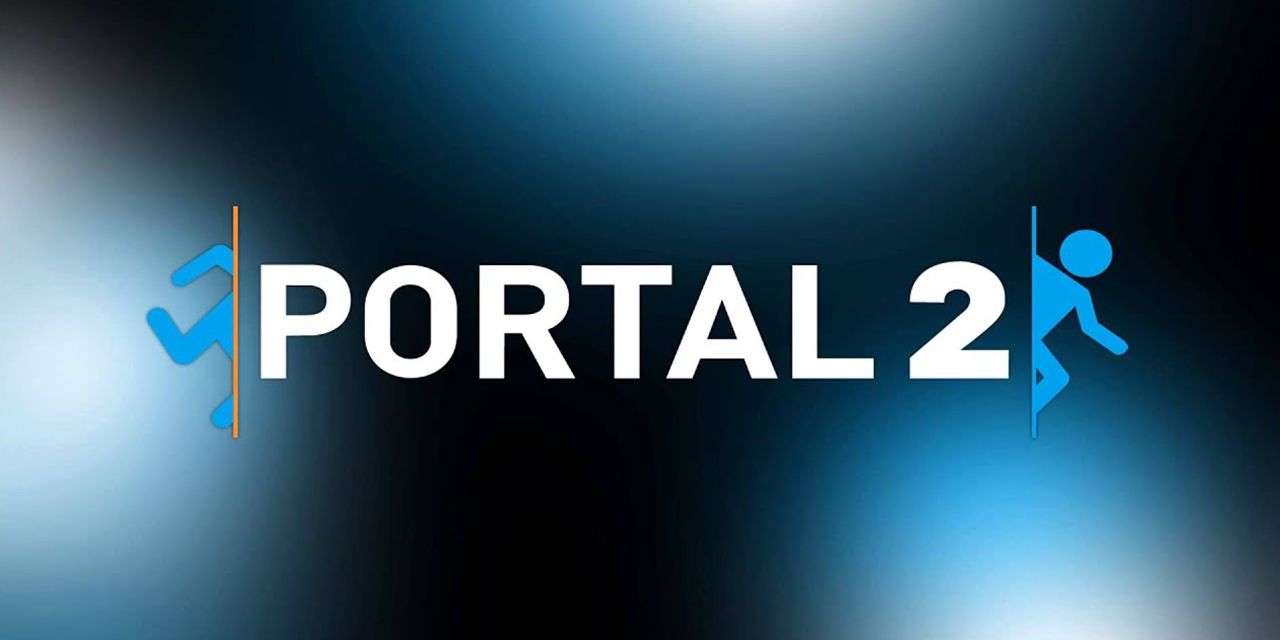 This epic song was used for the majority of promotional footage during the pre-release days of Portal 2. The intense teasers and trailers were accompanied by a vibrant new sound, promising danger and puzzles galore. With over 600,000 listens on Spotify, “Reconstructing More Science” is arguably the theme song of Portal 2, with a recognizable melody accompanied by a wave of nostalgia. Has it really been 9 years already?

Portal 2 was originally scheduled to be released in late 2010 but was postponed to February of 2011 for an overhaul of dialogue, testing chambers, and the gel mechanics. Ultimately, the market release date was April 19, 2011, though players were able to play through “[email protected]” to unlock Portal 2 10 hours before its release date. 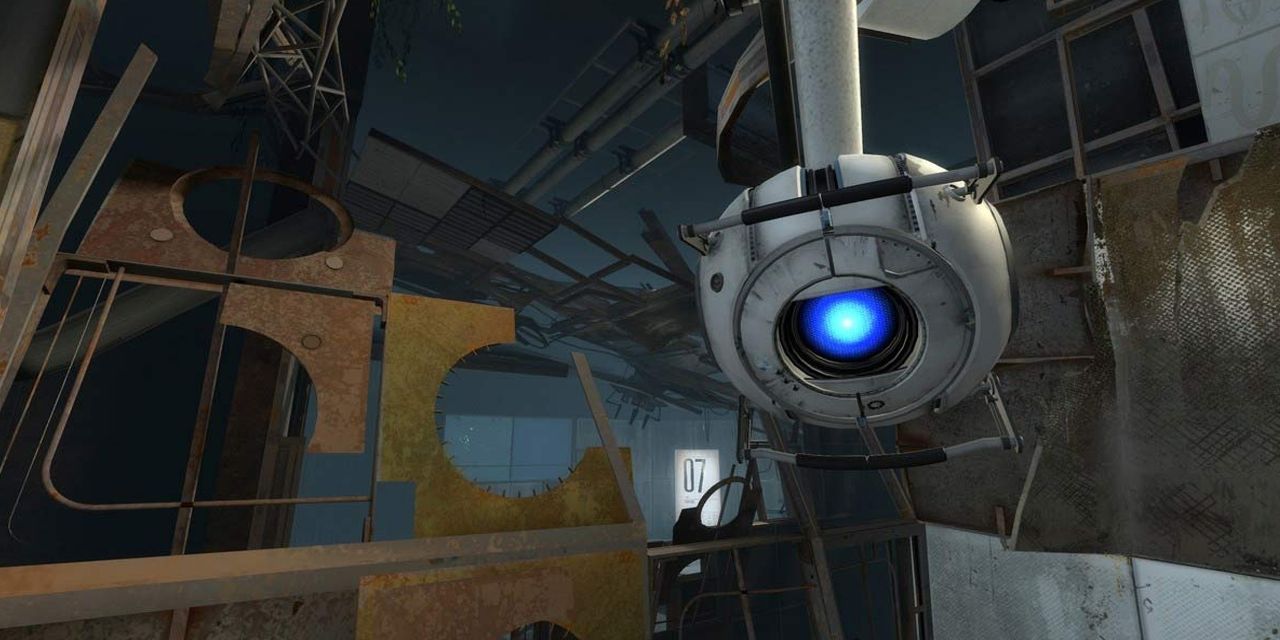 One of the many mesmerizing title themes one may encounter when starting up the game, Portal 2’s “9999999” combines synthesizer and orchestral instruments to hint at the journey that is to come for Chell and the player.

A reference to the unknown amount of years Chell has been asleep in stasis, the song not only teases the arpeggiated motifs that define the music of Old Aperture but also perfectly foreshadows the entire soundtrack to come, all in a single song. These menu songs are the perfect reason to play at a steady pace while playing through Portal 2 for the first time, instead of playing through the game all in one go. 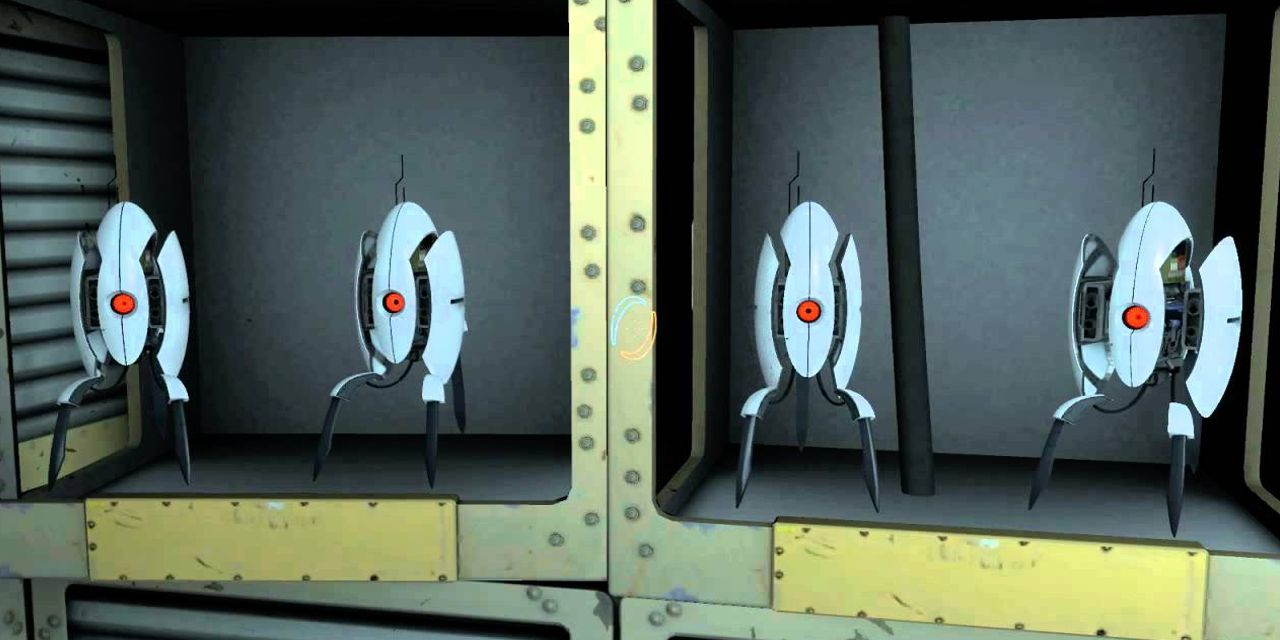 Many would agree that the “Turret Wife Serenade” is one of the best easter eggs in any Valve game, let alone Portal 2 (Though American rock band The National would beg to differ). Within Test Chamber 16 of Chapter 3, the player can destroy the turret sitting behind the grating near the entrance to find an alcove containing singing turrets.

The five turrets (four regular ones and the Prima Donna Turret) will sing for the player, though most likely unaware of Chell’s presence. This secret practice session is foreshadowing for the ending song “Cara Mia Addio” and is quite enjoyable in its own right, with over 850,000 listens on Spotify. 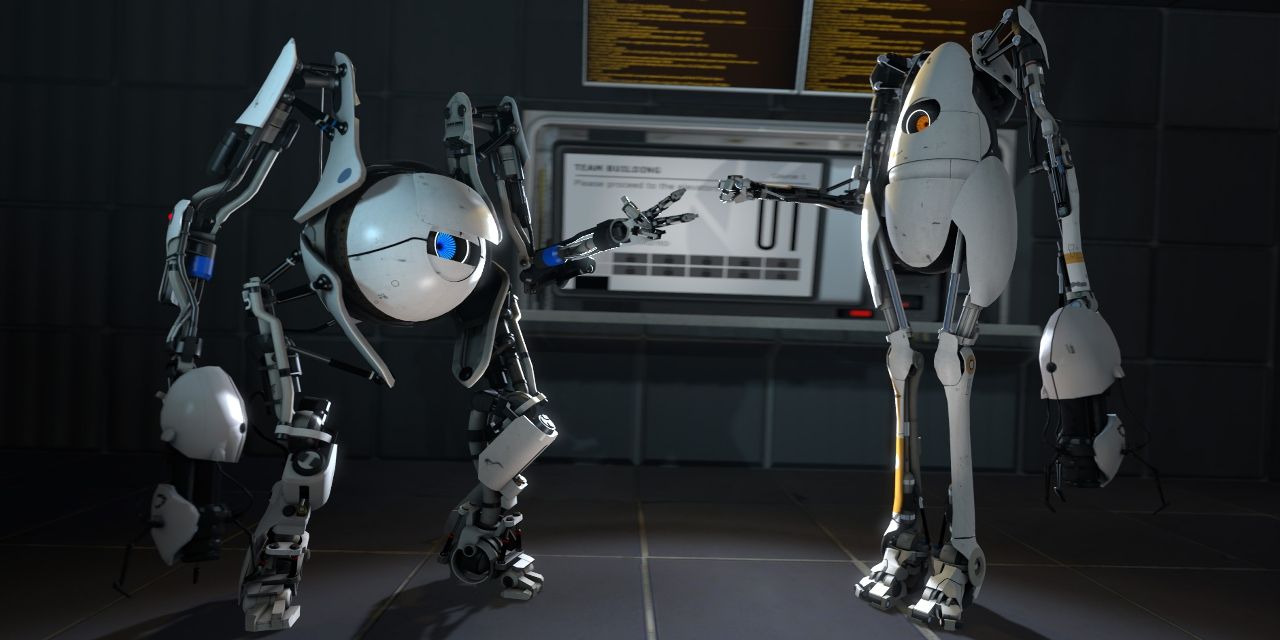 Valve composer Mike Morasky knocked it out of the park with Portal 2’s entire soundtrack, but “Science Is Fun” is a particular standout. Both intense and classic, Morasky lets the synthesizers loose to create a blood-pumping, pulse-racing experience that has over 1.3 million listens on Spotify to this date.

Portal 2’s soundtrack was highly praised upon the game’s release, being awarded “Outstanding Achievement in Original Music Composition” by the Interactive Achievement Awards, and “Best Interactive Score” by The Game Audio Network Guild. “Science Is Fun” is just one of the 64 songs that make up the timeless soundtrack of Valve’s crown jewel of puzzle-solving games. 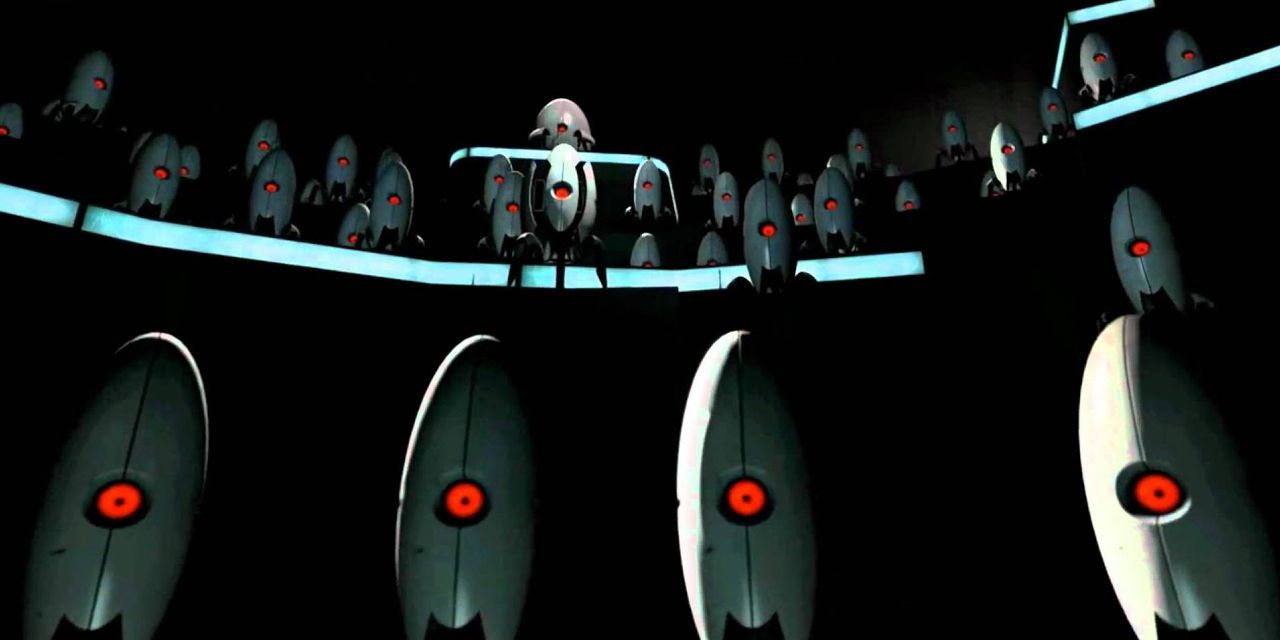 If someone had warned us in advance how emotional a choir of singing robots would make us, it still wouldn’t have prepared us for the beauty that is “Cara Mia Addio.” There’s a reason why it’s in the top 4 most listened to songs: the genuine emotion communicated through the opera-singing turrets perfectly encompasses the journey both GLaDOS and Chell have gone on throughout Portal 2 to arrive at that point.

The fact that it’s sung by Ellen McLain, the voice of GLaDOS, and a professional American opera singer makes it all the more captivating to listen to.

3 Exile Vilify (From The Game Portal 2) 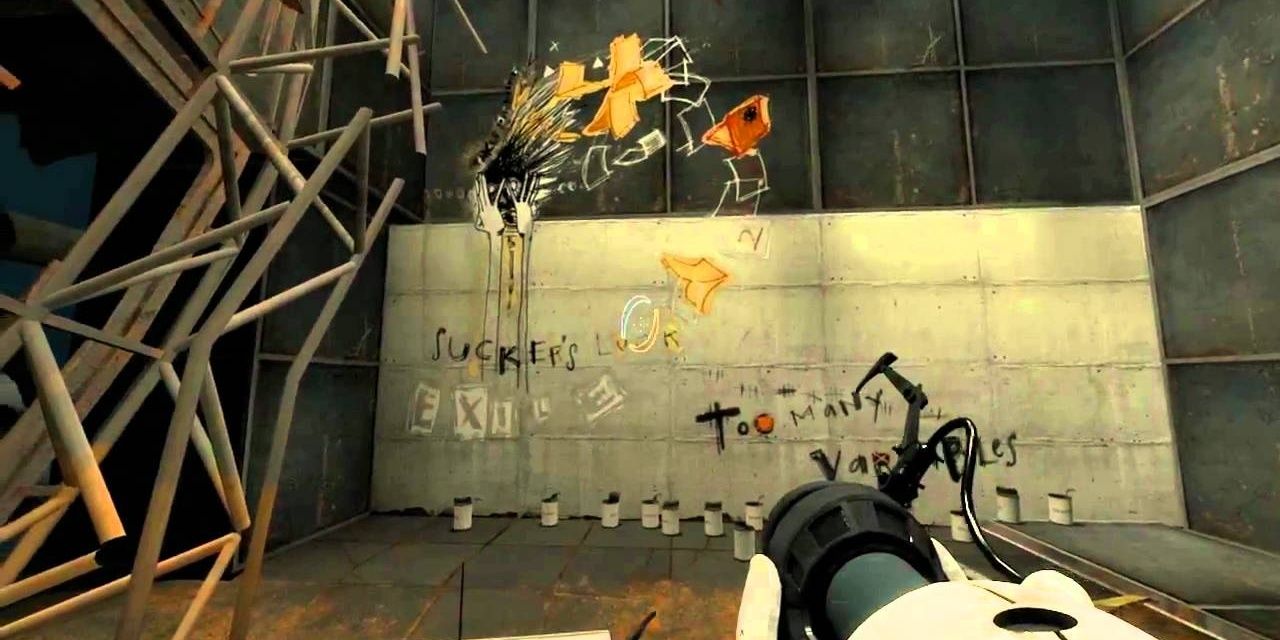 One of the most popular songs in Portal 2 is able to be missed entirely, being an easter egg hidden away in one of Doug Rattmann’s dens. “Exile Vilify” is a song written and performed by American band The National, who were convinced to contribute both by their publishing company, Bug Music, and the contribution of Stephen Merchant as the voice actor of Wheatley. The lead singer of The National, Matt Berninger, described the game as “hilarious, but it’s such an immersive, weird zone. It’s sad and desolate, too. It’s a creepy, lonely space.”

“Exile Vilify” was originally written for a fake ending in the middle of the game, but ultimately ended up as an easter egg played on a radio in a Ratman den. The den can be found near Chapter 2’s Test Chamber 3. 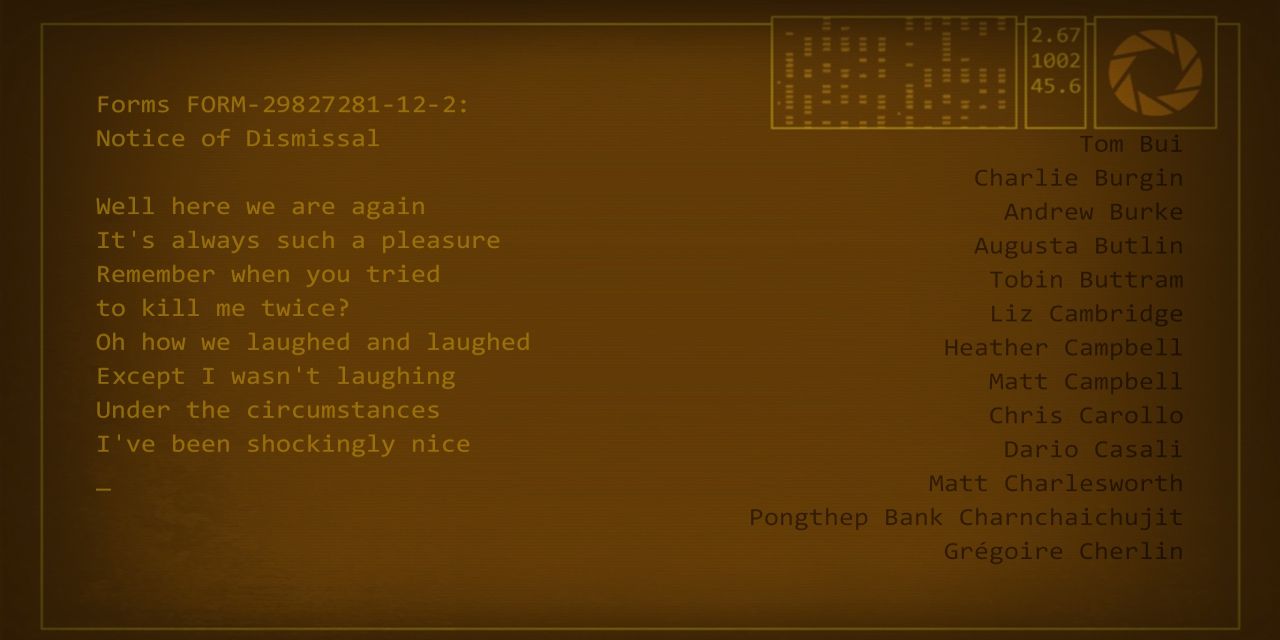 With over 8 million listens on Spotify, “Want You Gone” the worthy follow-up to the ending song of its predecessor that has spawned countless covers, remixes, and memes. This song has noticeably more honesty and emotion from GLaDOS, as well as some sick synthesizers. And let’s be real: who really believes GLaDOS deleted Caroline?

Being able to enjoy such a good song while witnessing every person who contributed to making such a stellar game is the perfect conclusion to the story, as well as seeing Wheatley’s regrets from outer space. “Want You Gone” is the most listened to song from Portal 2 with 8.2 million listens on Spotify. 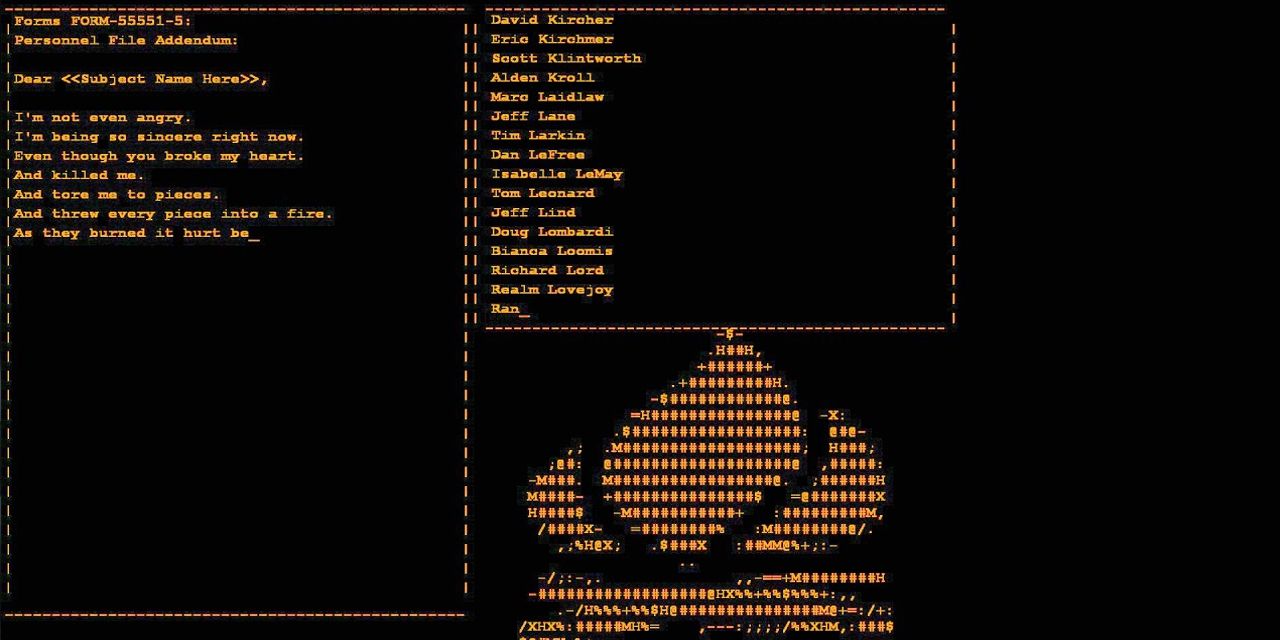 Surprising absolutely no one, “Still Alive” from Portal claims the top spot on the list, with over 14 million listens on Spotify. Jonathan Coulton’s endlessly catchy song set a precedent for the game’s future sequel and DLC appearances. GLaDOS’ letter to <<Subject Name Here>> is in the form of a song, combined with the use of text art, a popular art form on the internet of creating images entirely through ASCII. Its title also suggested the return of everyone’s favorite Neurotoxin-loving AI, whose accidental revival would occur four years later (gosh darn it, Wheatley!)