Despite being grounded in a parody of the real-world Los Angeles, Grand Theft Auto V is still well-known for its forays into the supernatural and, to put it simply, alien. Unveiled by the likes of The Game File Gurus, a group of YouTube modders and dataminers, GTA’s supernatural side comes to life in a secret UFO mission for GTA Online involving the collection of space ship parts, killing military men at Fort Zancudo, and a reintroduction to the offline story character, Omega. 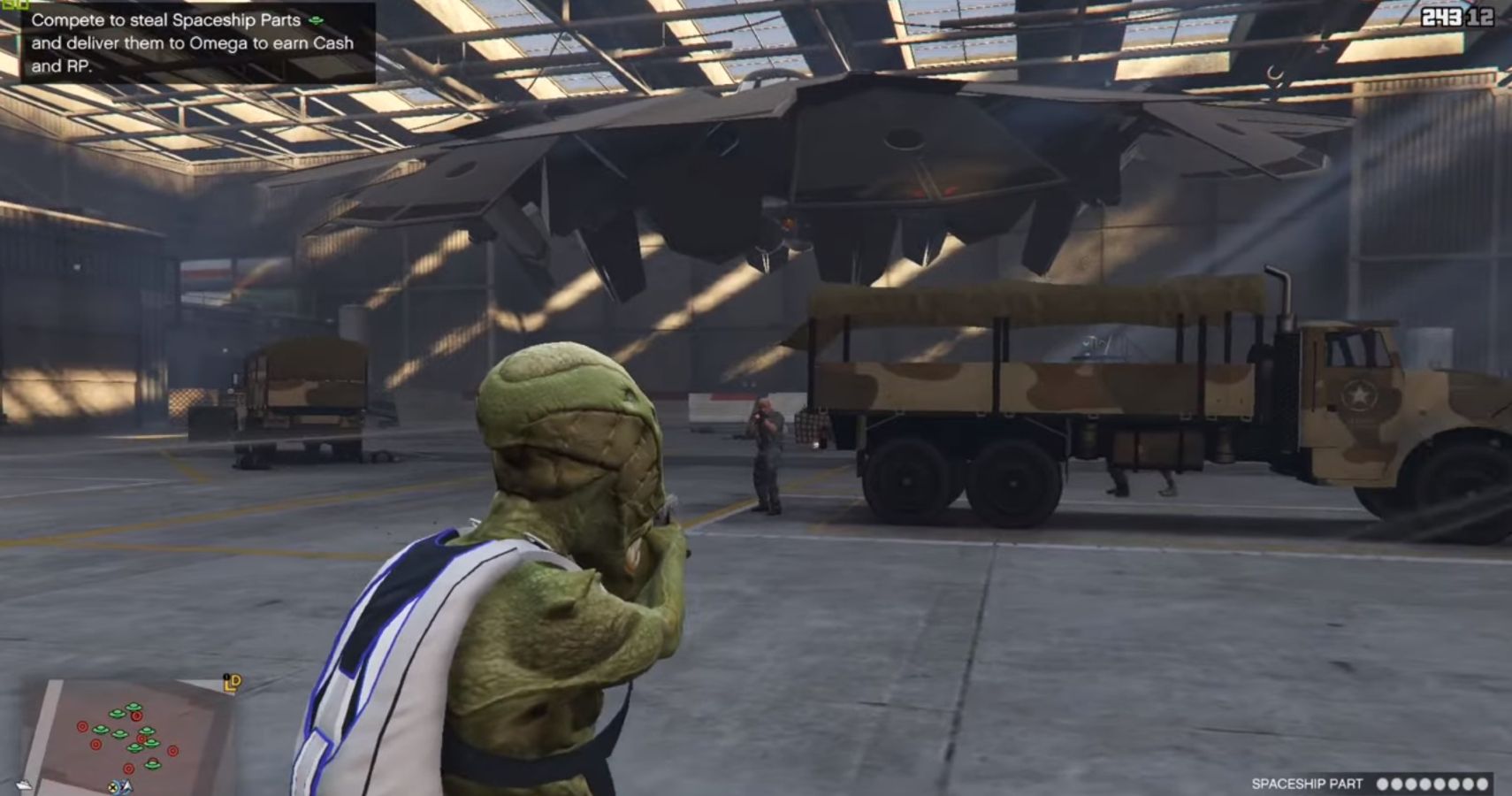 The Game File Gurus uncovered the secret mission by way of snooping through the update files from the Summer Special DLC. While it may sound like a simple task, they themselves explain it was far from it. The Gurus team reports that it was an effective headache, necessitating the alteration of over 40 different scripts, both online and local. The team had to effectively brute force their way in, by all accounts breaking the game so as to experience the mission for themselves.

Unlike some of the more ridiculous GTA Online missions, like the Casino heist or any of the various Arena Wars, this hidden UFO mission is actually a business battle, wherein two freemode-active CEO players go head-to-head in an all-out rampage to see who will come out victorious and walk away with an assortment of loot. The objective of this business battle, however, would have seen the two rival companies attempting to nab as many space ship parts as possible before the timer hit zero. The prize would have been a sleek and shiny UFO, pictured in all of its menacing glory above, gifted via the aforementioned Omega, who dolls out the mission from the start.

As a promising entry into GTA Online, with its own reward that’s out of this world, the UFO business battle remains buried in the code with no word from Rockstar if it will ever make a real in-game appearance. The last alien-based Online mission involved players seeking an egg by completing 600 gunrunning missions. Rockstar might be waiting for a more opportune moment to drop this otherworldly endeavor into the game, or players may have to get their business battle numbers up before it actually pops.

It’s unclear as of yet if it will ever make an appearance, though the Gurus are hard at work deciphering code and digging deep into GTA Online for more details. This secret UFO mission could even be tied to the still ongoing Chiliad Mountain Mystery, of which has its own subreddit to boot. There is still debate, however, whether or not these clues can appear in both the campaign and online, though judging by the alien egg supply run missions and its accompanying tattoo, it’s a safe bet Online is fair game.

No matter the case, the truth is certainly out there and if anyone’s going to find it, it’s the Game File Gurus.

Related posts:
08/25/2020 News Comments Off on Secret UFO Mission Discovered In GTA Online
Hot News
On The Level: Titanfall 2’s Effect And Cause Is A Mind-Bending Masterclass In Game Design
On The Level: A Reflection Of Fate/Grand Order’s Toughest Chapter
Twitch Removes Automatic Mid-Roll Ads, For Now
Lenovo Legion Sponsors G2 Esports as Hardware Partner
PS5 Won't Support PS1, PS2, Or PS3 Games, Sony Confirms
Recent Posts
This website uses cookies to improve your user experience and to provide you with advertisements that are relevant to your interests. By continuing to browse the site you are agreeing to our use of cookies.Ok