As you make your way through the Dawnguard DLC of Skyrim, you will come across the quest titled Touching The Sky. This is a long quest, with it's name referencing an ancient Falmer tome involving a ritual that you must perform during the quest. Touching the Sky will first bring you to Darkfall cave, as you search for Auriel's Bow.

In this guide, we are going to go over everything you need to know about Touching The Sky. This will include a step-by-step walkthrough of the tasks you will need to perform, as well as the rewards for completion. First, let's look at the prerequisite quests that you will need to complete. 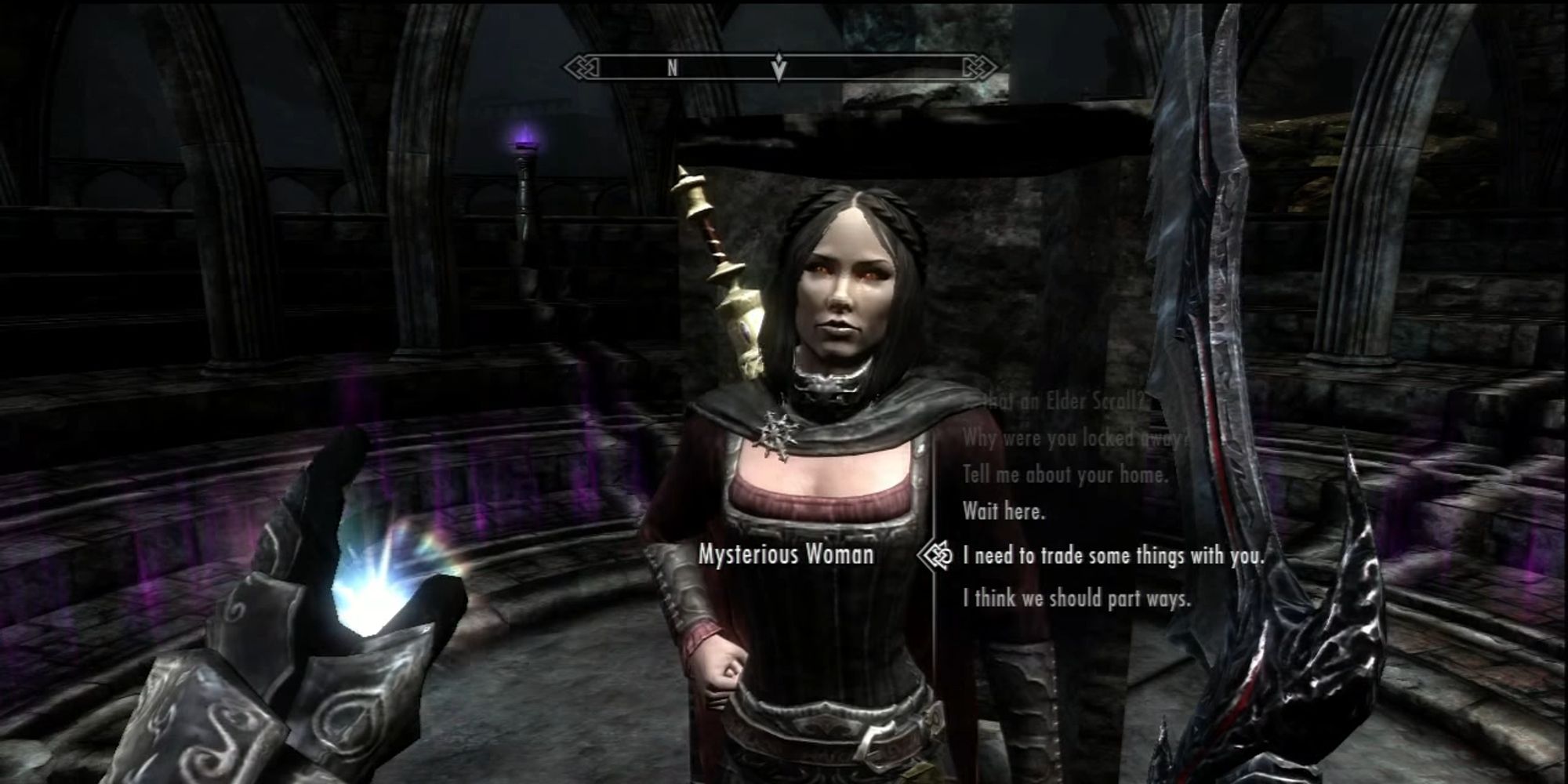 As part of the Dawnguard questline, you will need to progress through the following quests before you can begin Touching The Sky.

If you follow the story of this DLC, either as a member of the Dawnguard or as a vampire, you should not have any trouble accepting Touching The Sky. 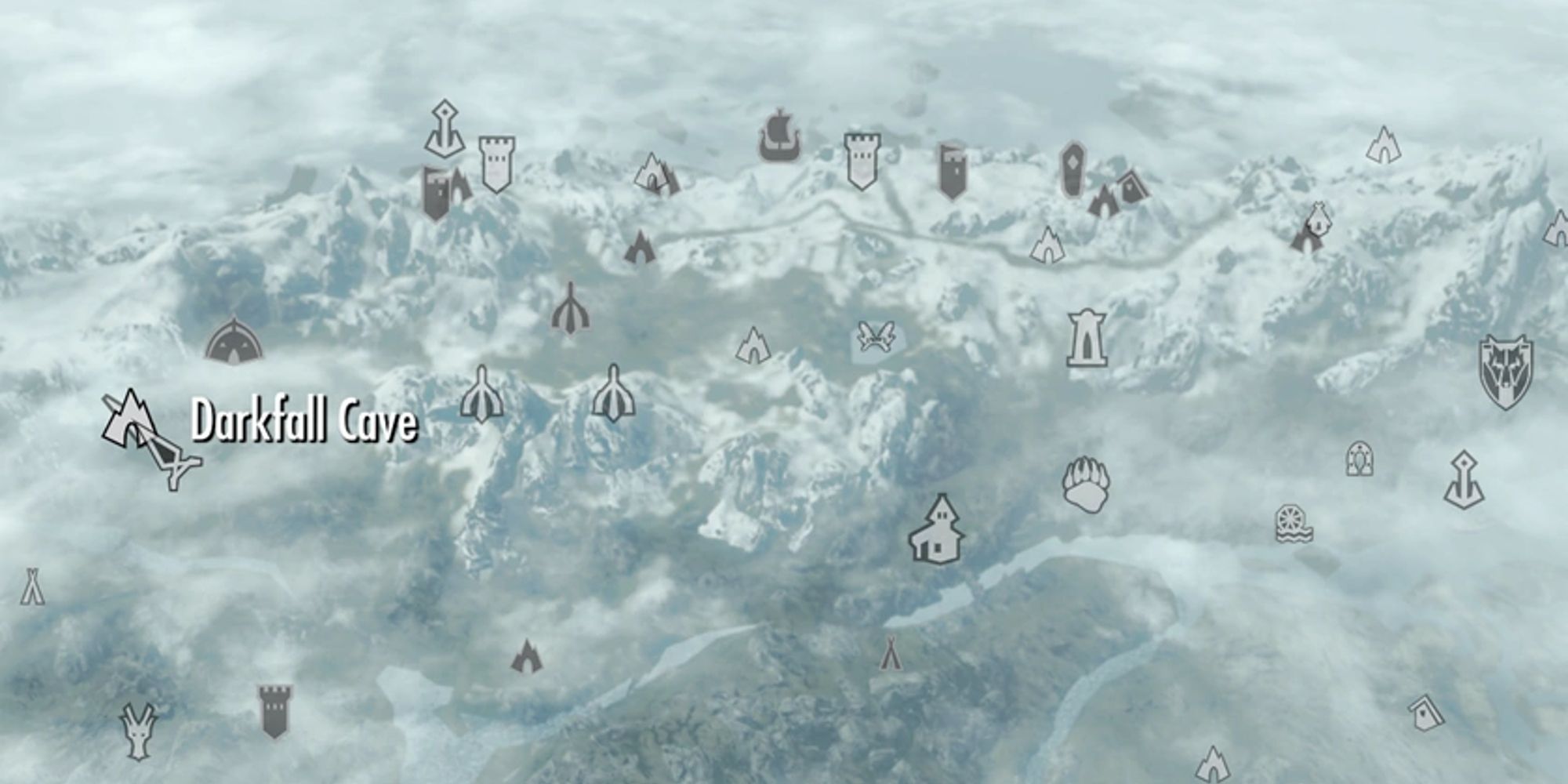 To accept this quest, you will need to meet Serana, who can be found in Darkfall Cave. Once you speak to her, this quest will begin. Darkfall Cave is located south of Castle Volkihar. Additionally, you can get here by heading north from Markarth. 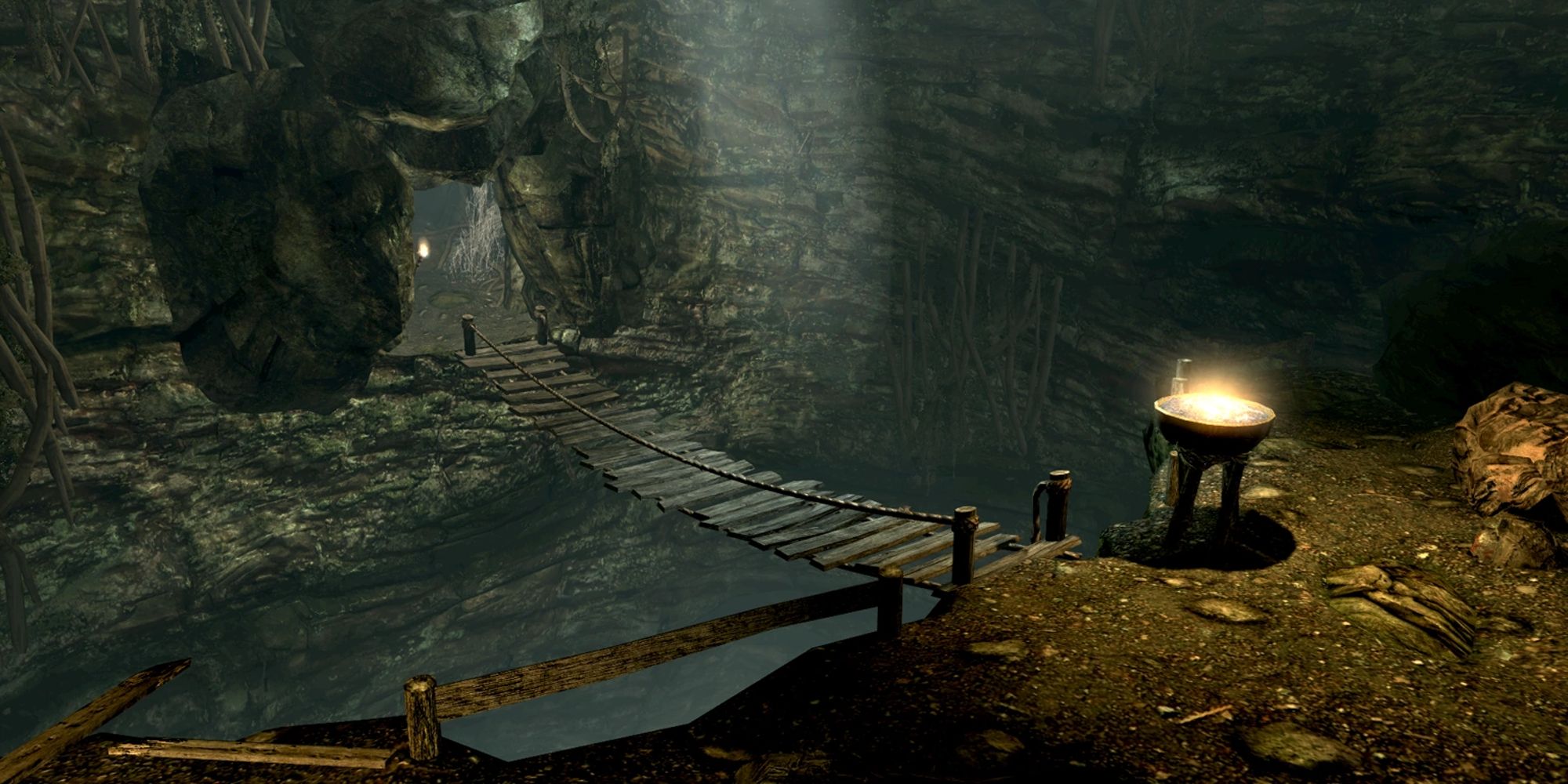 Your first task in this quest is to locate Auriel's Bow within Darkfall Cave. As the name suggests, the cave will be very dark. To aid in your search, you can light a torch, use your vampire sight (if you are a vampire), or use light-casting spells.

Within the cave, you will find frostbite spiders and trolls. These enemies are easy to deal with, so quickly defeat any that stand in your way.

As you make your way through the cave, you will come across a small wooden bridge. Here, you will need to jump off the bridge and land in the water below. Follow the current and proceed forward until you come to a campsite area and a fork in the road.

If you chose to go the path behind the dead Breton woman, you will encounter a tripwire trap that releases a boulder. Be cautious of this boulder and continue onward, killing the two trolls that stand in the way.

The other path will lead you to an area filled with spiderwebs. On this path, you will encounter a giant frostbite spider, as well as two trolls at the end of the passage.

Both of these passages will lead to the same place, where you will see the Knight-Paladin named Gelebor praying at an altar devoted to Auriel. 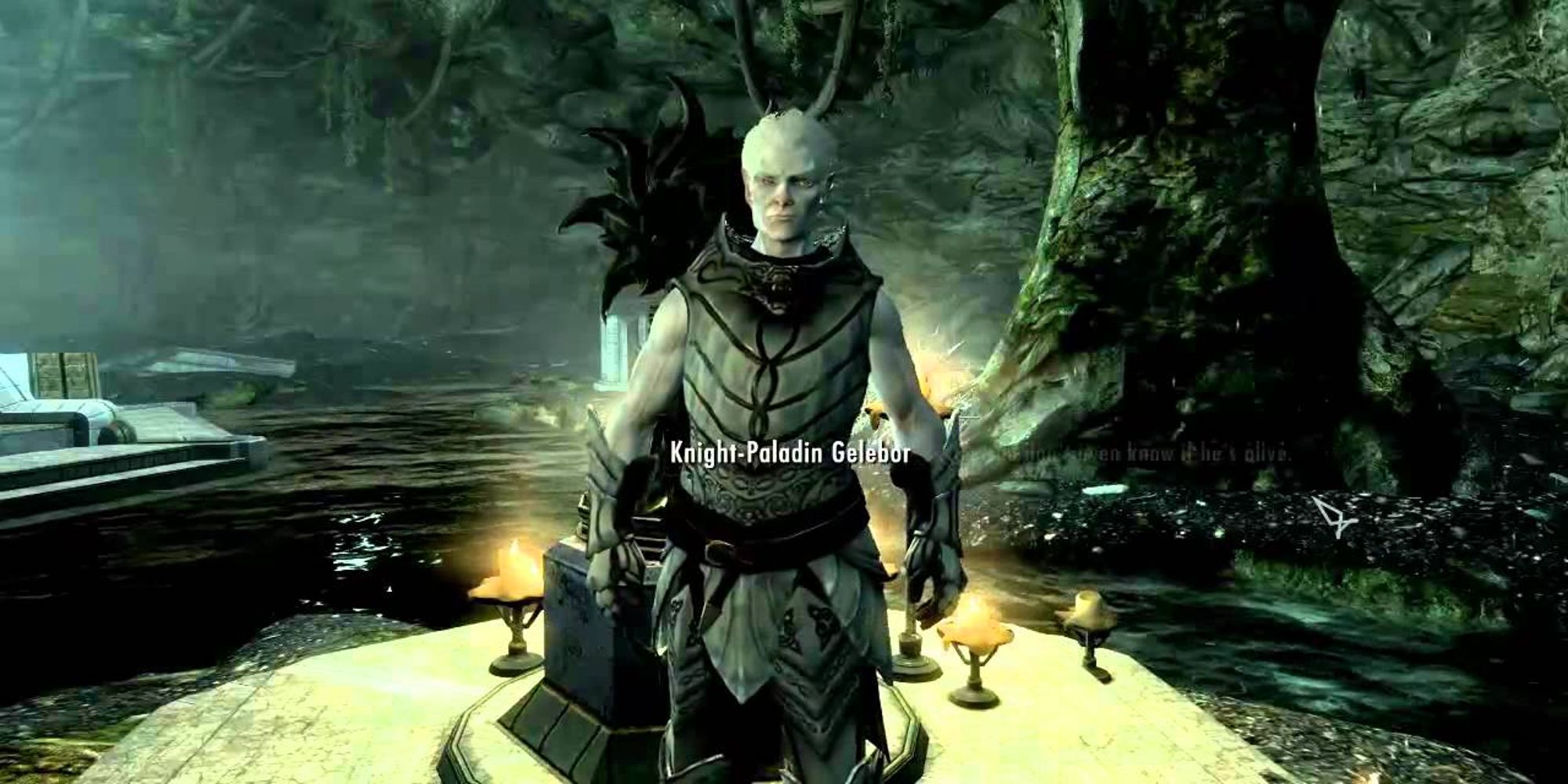 Gelebor will help you find Auriel's Bow, in exchange for your help killing his brother Vyrthur, who has been corrupted by Falmer.

This will not be a simple task though; to kill Vyrthur, you must first follow the path of an initiate of the Chantry of Auri-El. Overall, you will need to pass through five different wayshrines that lead to the Inner Sanctum, which is where both the bow and Vyrthur are.

Additionally, you will need to fill the Initiate's Ewer with water from all five shrines. 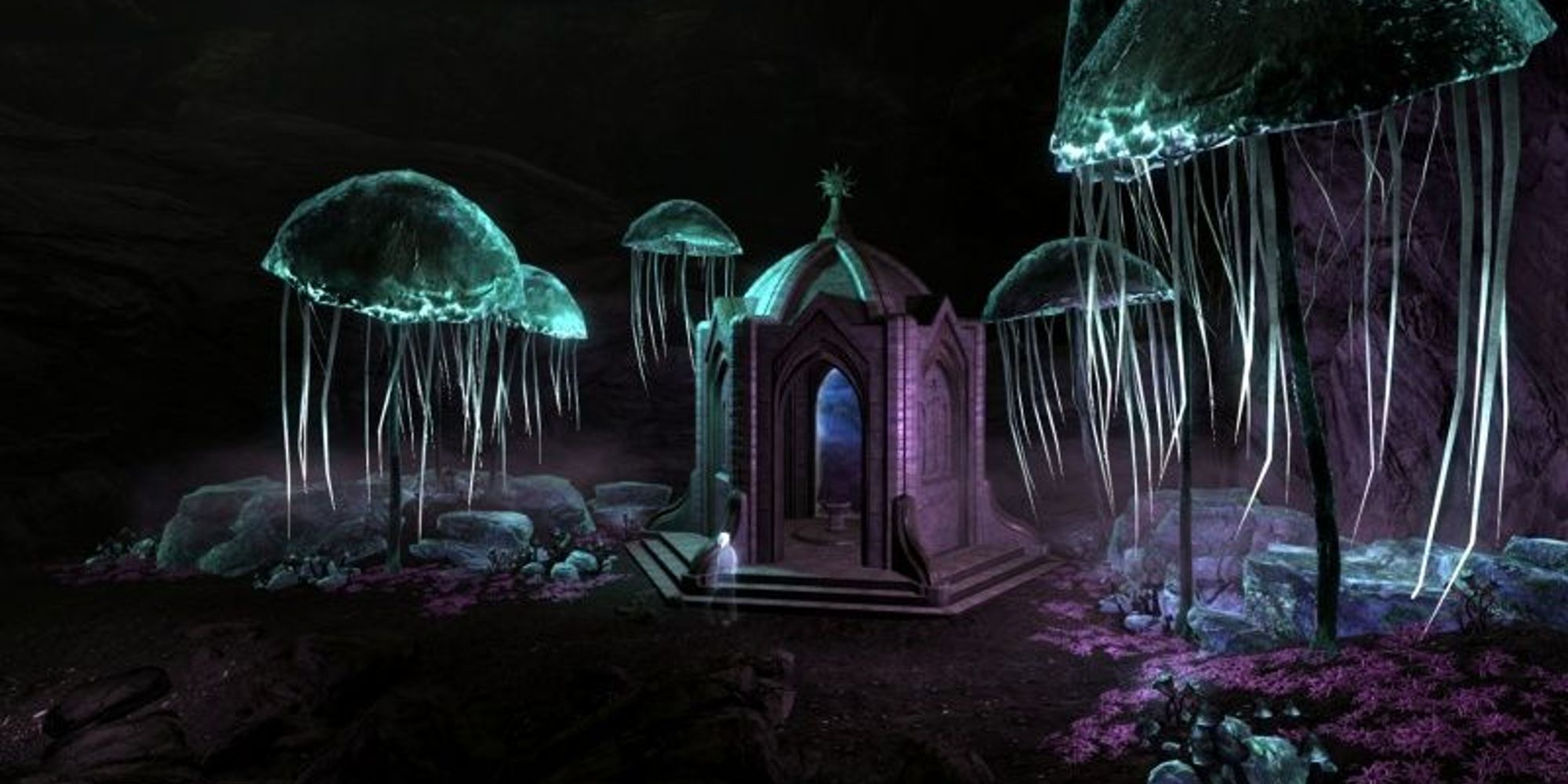 This is the first area that Gelebor teleports you to. Here, you will follow a winding road while slaying any monsters that stand in your way. Getting to the wayshrine is simple; just follow the path until you come to the shrine. 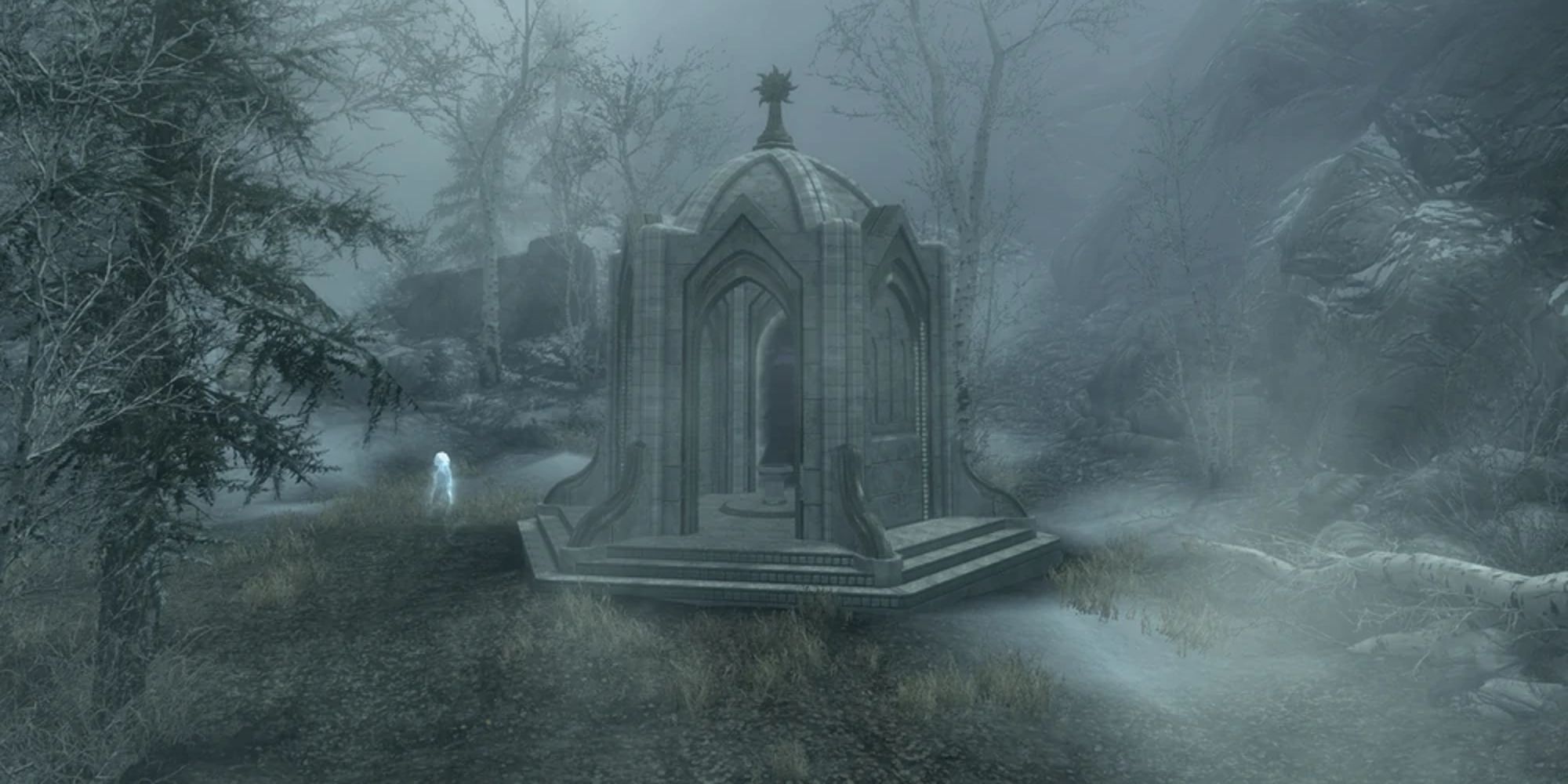 Now, progress farther until you exit the passage into the Forgotten Vale. This is a giant snowy area, but you can quickly reach the second shrine by going up the path to the north. On your way here, you will pass under arches. 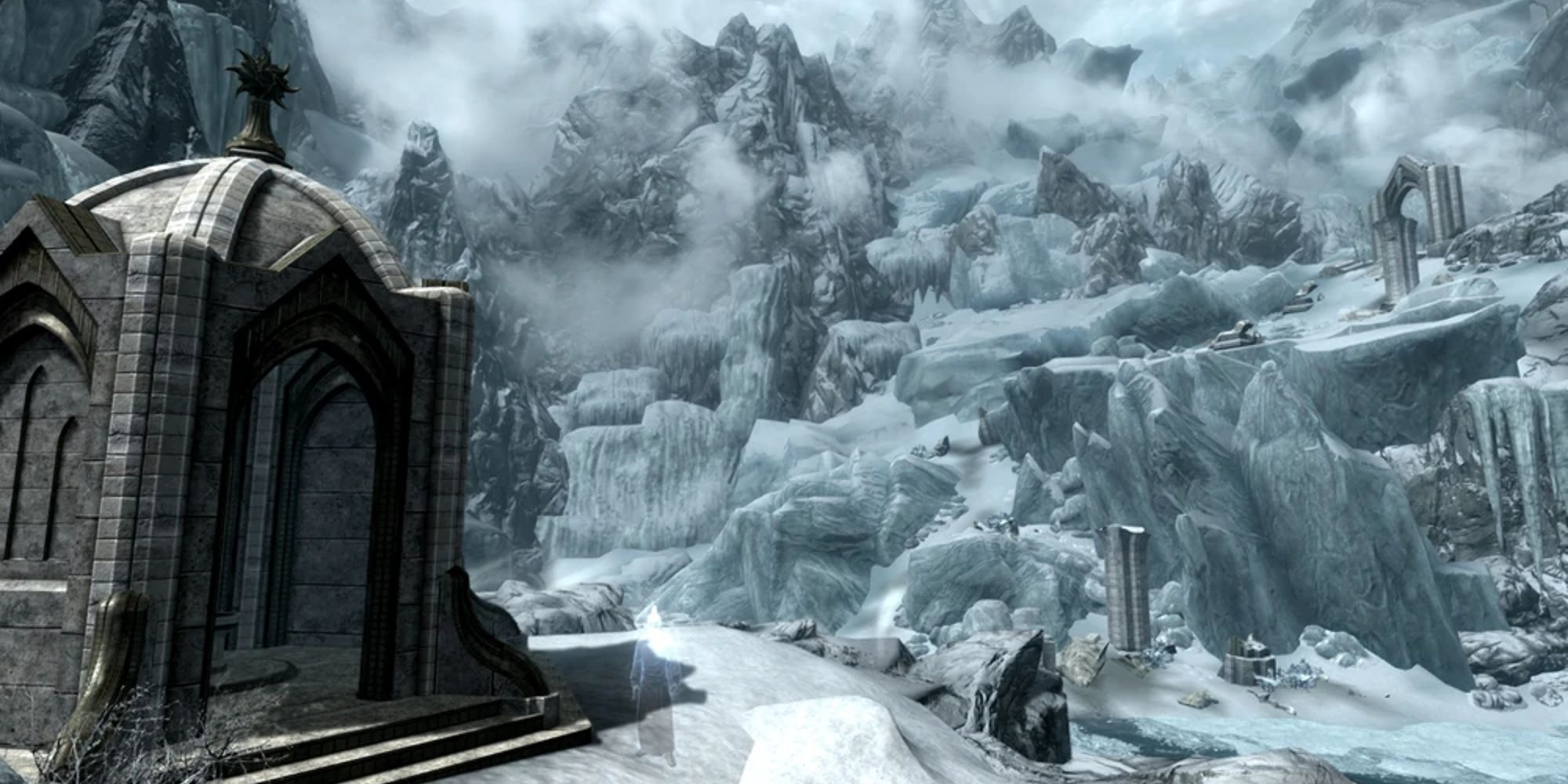 This shrine can be found to the west of the arches mentioned above. From the arches, head west up the stairs until you come to a narrow path. Kill any frostbite spiders that stand in your way, and then drop down into the river below.

You can find this shrine as you head downstream. After collecting water from the Wayshrine of Learning, head up the steep path leading to the frozen lake. 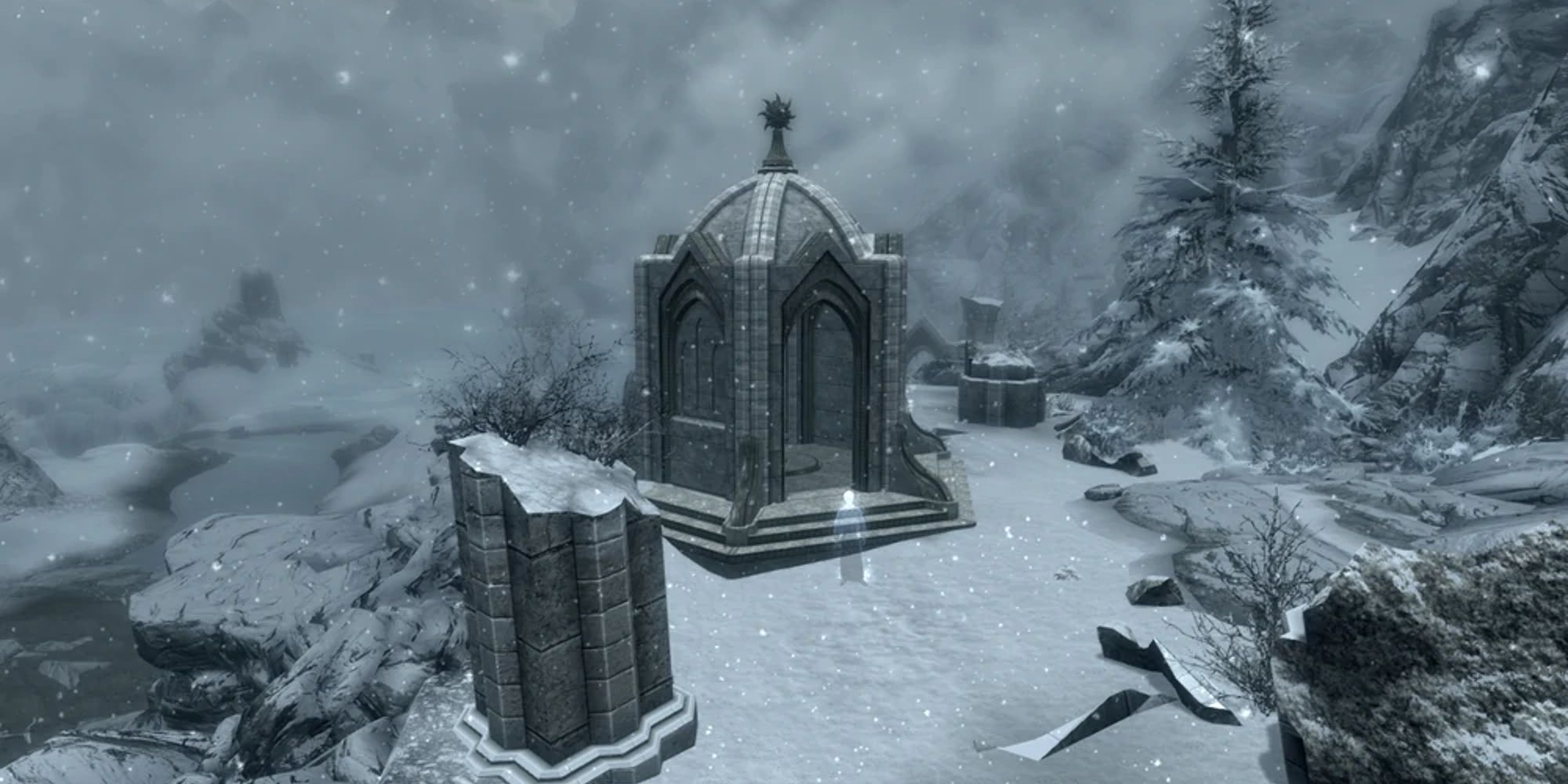 The fourth shrine can be found on the northwest bank of the frozen lake. On your way here, you can also find part of the shout for Drain Vitality on a rock that sticks out into the frozen lake. 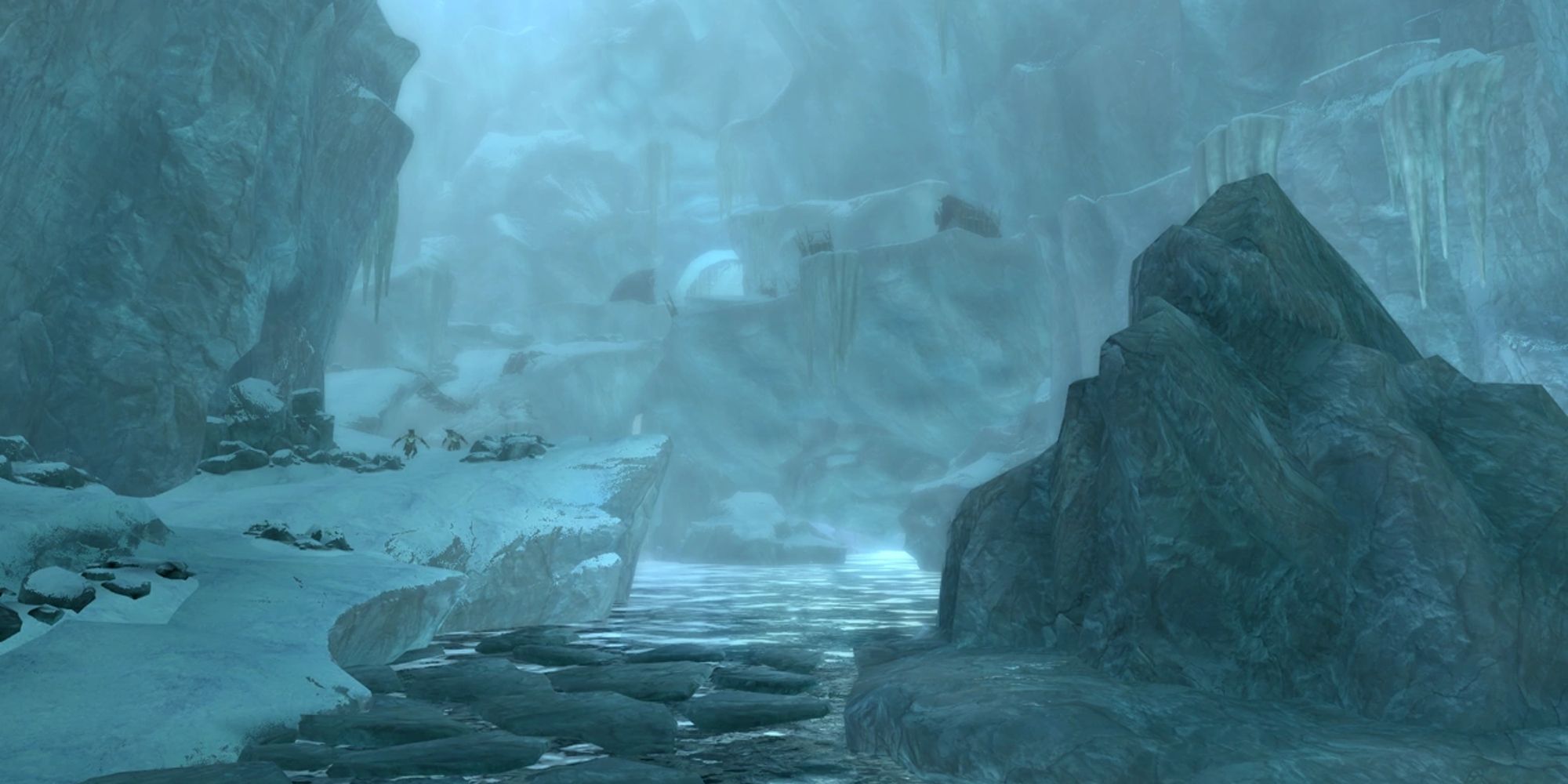 It's now time to visit the final shrine. From the Wayshrine of Resolution, head north to the Glacial Crevice. This is a long path that will take you through the living areas of the Falmer. Continue through this narrow passage until you come to a clearing high on a cliff with the shrine. Grab the water with your Ewer, and proceed to the Inner Sanctum where Vyrthur and the bow are.

Inside The Inner Sanctum 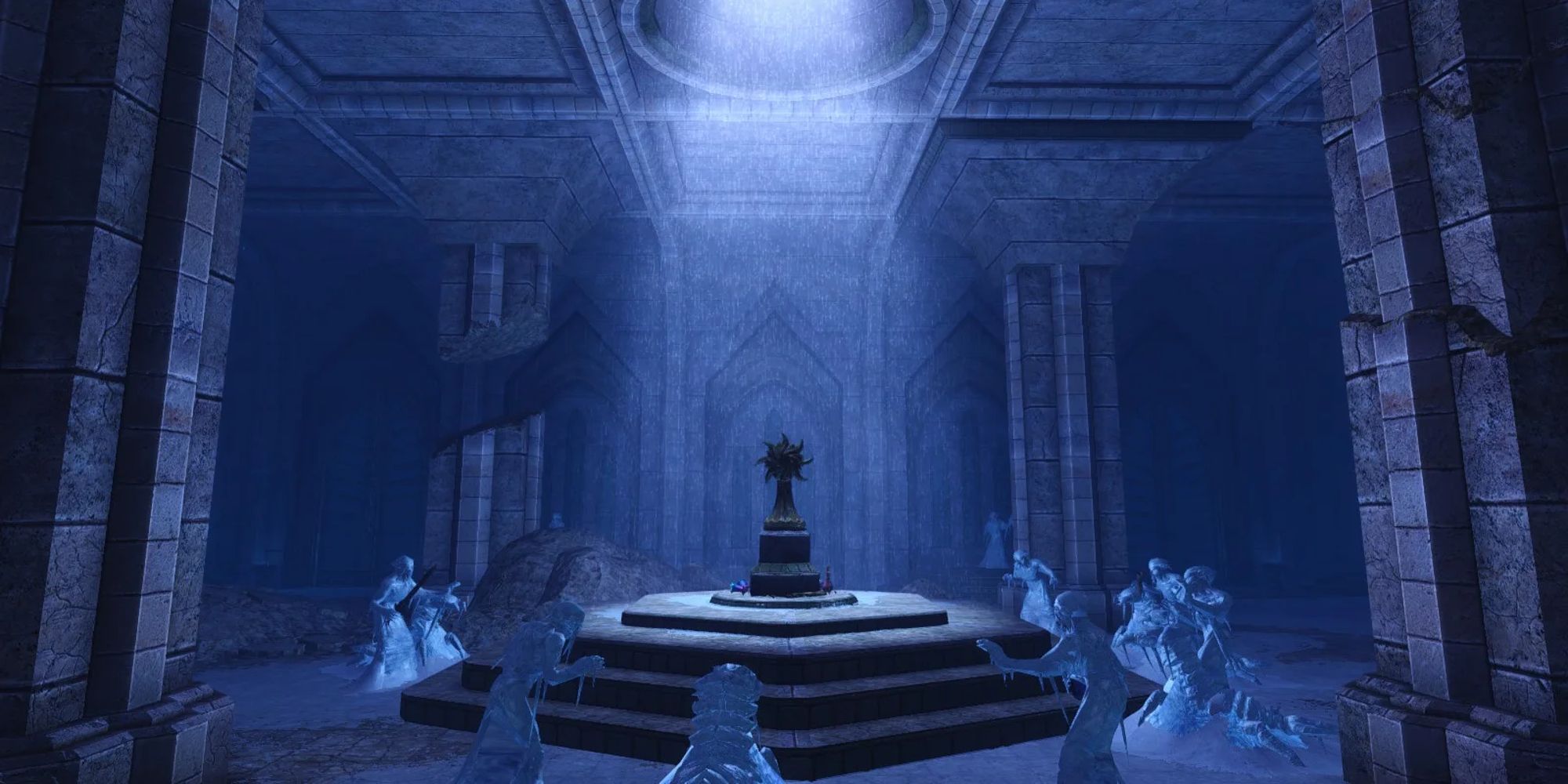 Once you make it to the Inner Sanctum, enter inside and place the Ewer on an altar to open the doors. After the doors open, be sure to grab the Ewer.

Proceed deeper into the Inner Sanctum until you make it to the chapel. As you enter, you will face three waves of enemies. At the end of the third wave, Vyrthur will cause the ceiling to collapse on you. After passing out, Serana will wake you up and instruct you to go to the balcony. Make your way here and confront Vyrthur. 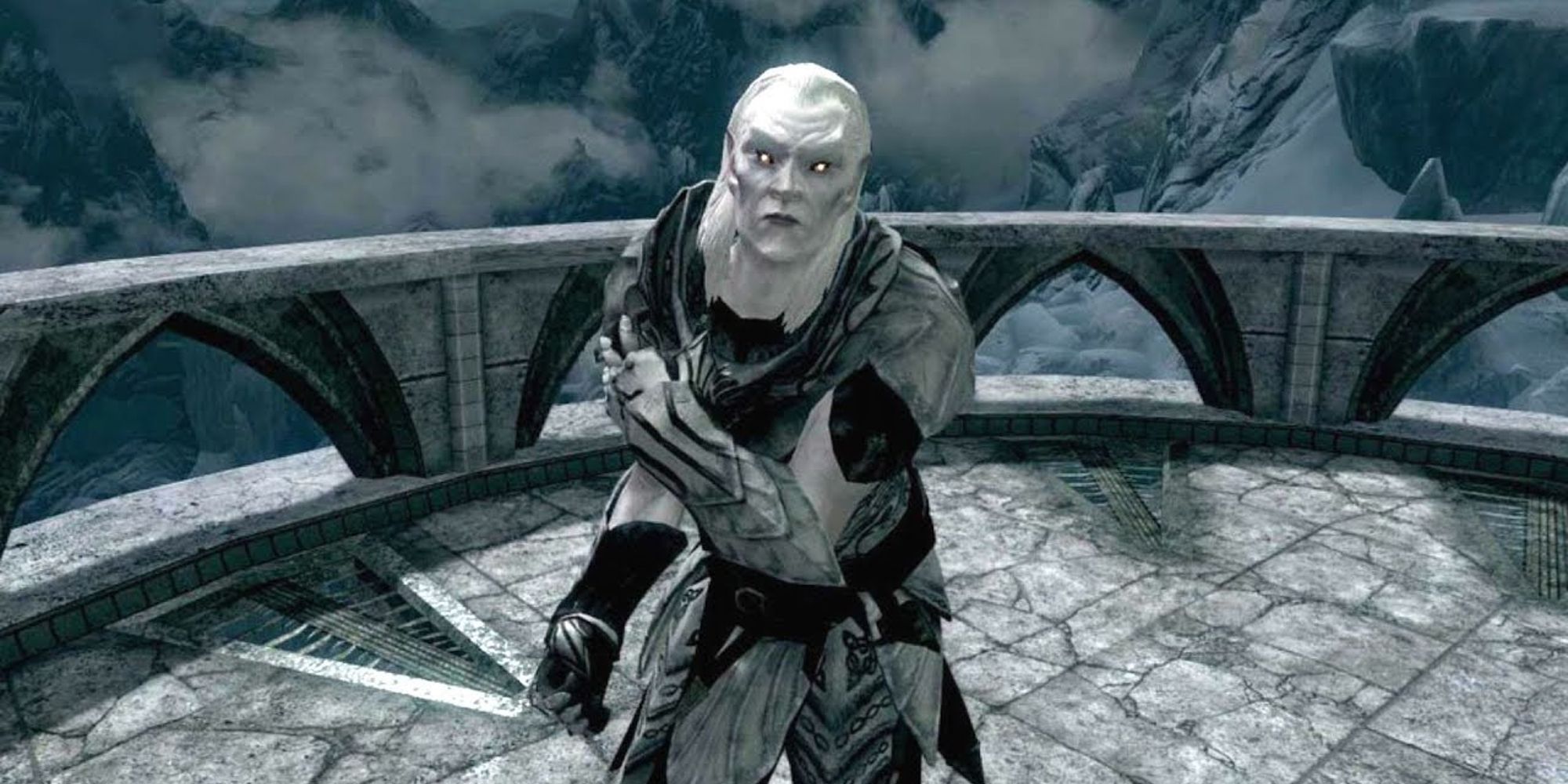 Vyrthur will use ice magic, Vampiric Drain, and Lightning Bolt. Additionally, he will summon a frost Atronach.

Overall, Vyrthur shouldn't be too hard to handle. Dodge his attacks while dealing damage in return, and he should be dead in no time. 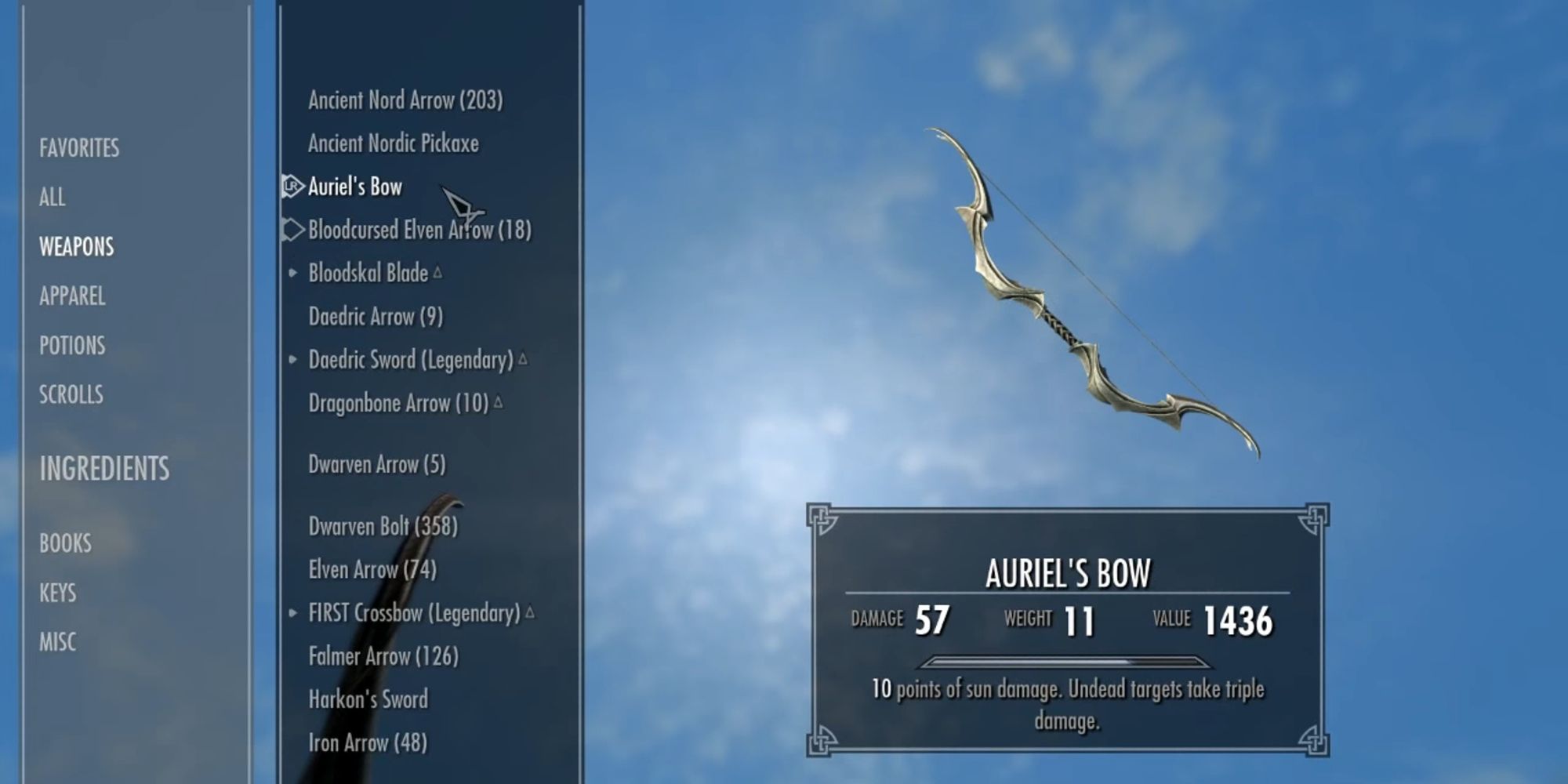 Now that Vyrthur is dead, a wayshrine will appear and Gelebor will walk out of it. Speak with Gelebor and claim Auriel's Bow for yourself. Once you do this, the quest will end, and you can begin Kindred Judgement.

As a reward for completing Touching The Flames, you will be rewarded with the following items.

Auriel's Bow is fairly strong, dealing 20 points of sun damage to enemies. If shot at an undead target, this will become 60 points of sun damage. Gelebor mentions that the bow was carried by Auri-El himself, and that "its craftsmanship has no equal anywhere within Tamriel".

Now that you have Auriel's bow, it's time to go confront Lord Harkon in Kindred Judgement.