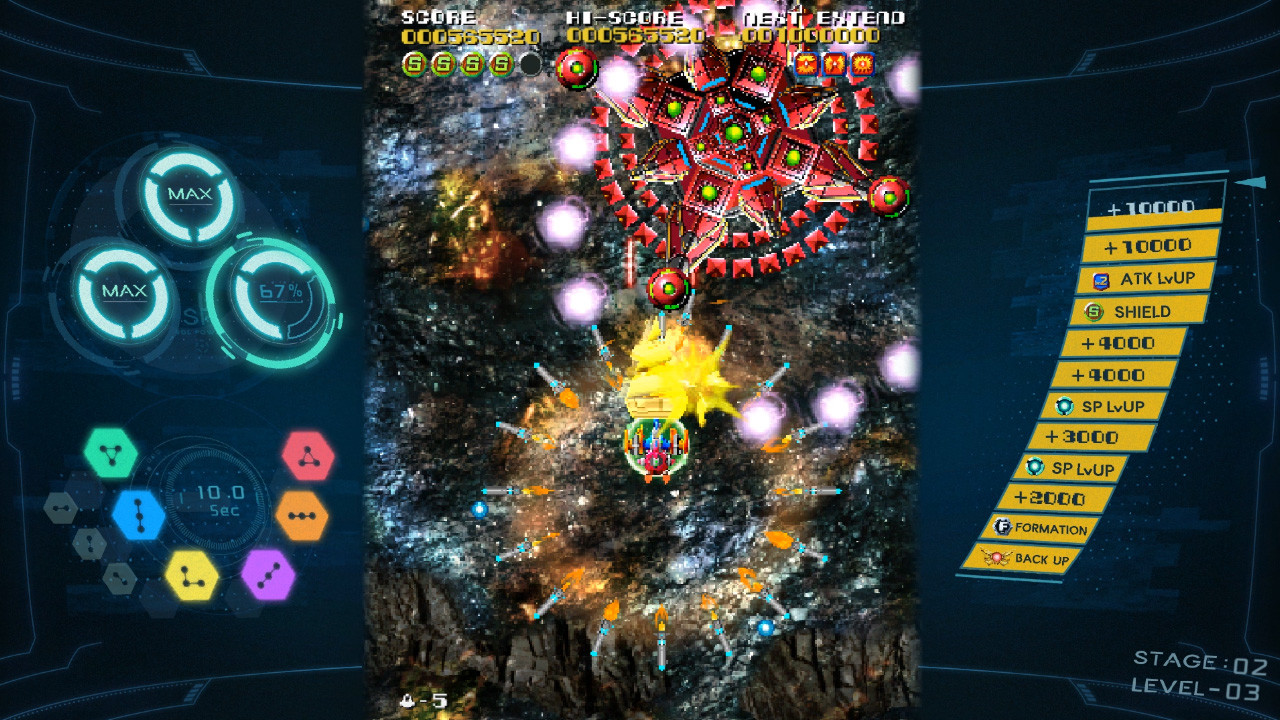 The creator of Devil May Cry and Bayonetta indulges his love of 2D shooters with a new sequel to a peculiarly obscure franchise.

It seems a long, long time since we’ve played a new PlatinumGames title. They’ve always been one of our favourite studios and while they have had the odd dud they’ve also been responsible for all-time classics as Bayonetta and NieR:Automata, as well as other great action titles such as Vanquish and Astral Chain. The latter, from 2019, was their last big budget release, before they began to focus on self-publishing and vowed never again to work on a game that they didn’t own the rights to.

That change of direction is no doubt the reason for the lack of recent releases, with their grand return being… a sequel to an obscure 2D shooter that they don’t own the rights to.

To be fair, this is clearly a passion project for Bayonetta and Devil May Cry creator Hideki Kamiya, who has always proclaimed himself to be a fan of 2D shooters. The Cresta franchise, by the now defunct Nichibutsu, started with 1980’s Moon Cresta and continued with 1985’s Terra Cresta (nominally the most ‘famous’ one of the series) and then a confusing series of pseudo-sequels and spin-offs. Which makes Sol Cresta the fourth or fifth entry, depending on how you look at it.

We’re not sure whether Platinum expects anyone to have ever heard of the Cresta games before, but the bizarre way in which Sol Cresta was first announced, where the unveiling was implied to be an April Fool gag, makes the whole situation very hard to read. Especially as Platinum later realised the marketing faux pas and had to start explaining to everyone that they were only joking about the April Fool and actually it was a real game after all. All we can say is we hope they’re better at marketing when it comes to their bigger budget titles.

So what is Sol Cresta? It’s a vertically scrolling 2D shooter with the rather cool gimmick that collecting weapons power-ups adds additional ship parts to your craft that can be detached to fire as up to three separate craft. The red one has a spread shot, the blue one has homing missiles, and the yellow a forward-firing laser.

That was the basic concept behind Terra Cresta, but this sequel builds upon the concept in various interesting ways, that we’ll get to in a moment. The most obvious thing to discuss first though is the graphics, which are… dreadful. Platinum is clearly trying to make Sol Cresta look like a retro title, capping the technology at what looks like the Sega Saturn era and even including an option for CRT scanlines.

Whatever the original intention though the end result is a persistently ugly game that makes it difficult to even spot some enemies, especially trying to work out which are on the ground, and so can be flown over, and which are not. To make things worse, by default Sol Cresta has ugly great borders around the screen, to mimic the vertical orientation of old school arcade games, and fills with them a mess of unnecessary displays that are very hard to parse at a moment’s glance.

At this point you’re probably wondering why the game has such a relatively high score, but thankfully it plays better than it looks. The shooting is very satisfying, with well-designed stages and enemy attack patterns, and some great pacing despite the levels being much longer than normal for the genre. It’s also interesting that the game is not a bullet hell shooter, presumably because Terra Cresta wasn’t, and instead the most distinctive element is the newly expanded docking system, which encourages you to constantly switch the position of the three component ships.

Depending on which ship is in the front, middle, or back positions you can change the main and special weapons in an instant. Building up a special gauge, by collecting coins and destroying enemies, also allows you to split them into separate ships again and move them into preset formations which also have their own special attacks, including the iconic flaming phoenix from Terra Cresta – an obvious homage to Battle of the Planets/Gatchaman.

This is great evolution of Terra Cresta’s best trick and is added to with a series of special directional attacks that are activated via Street Fighter style twists of the controller. However, much like the formations, it’s easy to forget this is an option, as there’s little in the game design itself to force its use and it’s tempting to just play the game as a normal shooter for most of the time, until you hit an impasse and realise you’ve forgotten half the game mechanics were even a thing.

Surprisingly, Sol Cresta is not especially difficult. Not only is there a shield but you don’t die until your last ship is destroyed. It’s true there are no continues, but you can start from any previously completed stage and there’s a range of difficultly levels – so no-one should have any problem completing the story mode. Whether they’ll fully understand how they did so though is a serious question, as the game does not explain itself well and barely seems to be trying to do so.

As fans of the genre we greatly enjoyed Sol Cresta, and it’s clear Platinum do have a talent for 2D shooters, which you’d expect given their arcade sensibilities. But whether by intention or accident the game is horribly inaccessible thanks to an unnecessarily off-putting mixture of poor graphics, poor tutorials, and the distinct impression that Kamiya made this for himself and no one else.

That’s a shame, because 2D shooters could do with a modern renaissance and the pleasingly deep mechanics of Sol Cresta do lend themselves to that. The obnoxious presentation does not though and neither does the frankly outrageous asking price. Both are serious mistakes in what otherwise could have been an enjoyable blast from the past.

In Short: An impossibly ugly attempt at a faux retro 2D shooter that thankfully plays better than it looks, but still feels like a mostly wasted opportunity.