While the likes of Samsung, Huawei, Apple, and Xiaomi now enjoy the lion’s share of the global smartphone market, a number of other players continue to build mobile devices for those looking for something a little “different.” One such company smartphone veteran Sony, which today unveiled its first 5G device.

The Sony Xperia 1 II is the successor to last year’s Xperia 1 and promises an array of shiny new smarts. While the 5G-ready variant appears to be limited to Europe — at least, it isn’t being made available in the U.S. — Sony was eager to hype the phone’s camera and entertainment capabilities. But it seems clearer than ever that Sony’s continued endeavors in the smartphone space are more about highlighting its underlying technology ecosystem than a serious bid to capture the mobile phone market.

The 3.5mm headphone jack, larger 4,000mAh battery, and improved Snapdragon 865 chipset are welcome additions to the Xperia 1 II, but in 2020 the camera is what really counts. Sony has included a three 12-megapixel camera array on the rear, focused on wide, ultrawide, and telephoto, in addition to a 3D iToF sensor. On the front, the camera packs an 8-megapixel selfie shooter. Sony also announced a new partnership with Zeiss, which provided optics specifically calibrated for the Xperia 1 II. 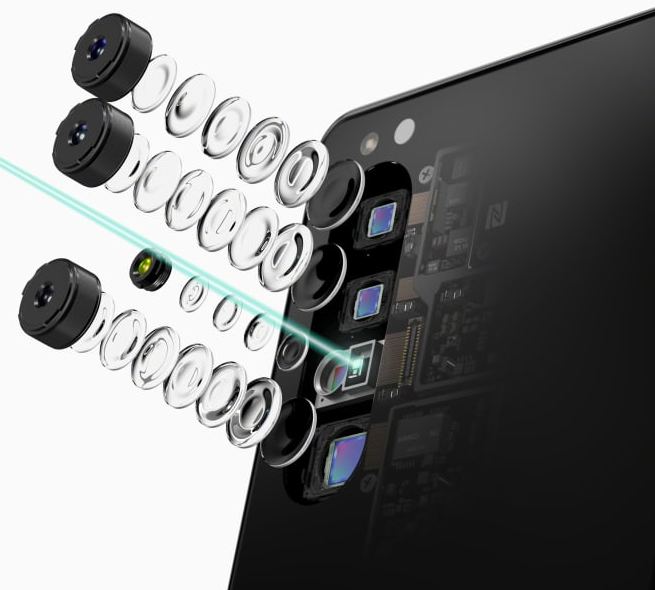 This all sounds fine, but what Sony is really touting with this device is the underlying technology it has developed itself.

Sony has borrowed features developed for its Alpha interchangeable lens cameras and claims to have created the “world’s first smartphone camera” capable of 20 frames per second (FPS) of continuous shooting in burst mode, which is particularly useful for capturing fast-action sports or any moving subject, such as children or animals. This is made possible due to its ability to calculate autofocus (AF) and auto exposure (AE) at 60 times per second.

Last year, Sony announced it was working on a new next-generation audio format called Sony 360 Reality Audio, which is basically a spatial audio technology for a more immersive listening experience. The format has been designed in concert with major record labels, including Sony Music Entertainment (as expected), Universal Music Group, and Warner Music Group, as well as a number of streaming services. Now, Sony is making the Xperia 1 II the first device to feature 360 Reality Audio, though this will apparently only work with Tidal’s streaming service at first.

On paper, Sony’s Xperia 1 II is decent enough, though the company has yet to reveal launch dates or prices, which makes it difficult to compare the phone to other Android flagships, such as the Samsung Galaxy S20. Moreover, if Sony is only launching a 4G phone in the U.S., it may be at a distinct disadvantage compared to its South Korean rival, which already has a number of 5G devices on the market.

That said, 5G is still in its infancy and its inclusion will only go so far when it comes to attracting customers. Bringing a 5G phone to market is an acknowledgement of the pressure to keep up with the Joneses, but the Xperia 1 II is arguably more about showcasing the company’s broader arsenal of technology to other companies. Indeed, Sony already provides camera technology for many big smartphone brands, and a recent report claims Sony constitutes nearly half of the global image sensor market. The best way for Sony to sell its technology to others is to build it into its own hardware, which is effectively what the Sony Xperia 1 II achieves.

“It is too early for 5G to bring any meaningful benefits to consumers,” noted Forrester VP and principal analyst Thomas Husson. “It almost feels like Sony has no choice [but] to continue to have a presence in smartphones to showcase its entertainment capabilities and its leadership in image sensors, without really believing it could ever come back to the old days, where the company had a relatively decent market share.”

Related posts:
02/24/2020 News Comments Off on Sony’s 5G Xperia 1 II is more a showcase than a contender
Hot News
World of Warcraft: Dragonflight – Enhancement Shaman Complete Guide
This Week In Pokemon: Scarlet & Violet Patch, Kissing Meowscarada, And More
The Callisto Protocol Has A PUBG Easter Egg, Despite It Being Removed From The Canon
Dragon Age: Dreadwolf Is Still "Deep In Development"
Sonic Frontiers’ Combat Nearly Became Like Bayonetta And Devil May Cry
Recent Posts