During the stream, the commentators explained that he used the rhythm of the music to know what was happening in the game and punched walls to find out exactly where he was. He also listened for the footsteps. He was using the Wii Controller during the infamous stair skip at the end of the game as the jump button is softer and allows for a faster mash. For the majority of the playthrough, he was operating on the old faithful GameCube controller.

A crazy moment during the run occurred at Shifting Sand Land, when Bubzia lined up Mario with the jumping block and then positioned himself a few inches to the left for a straight line to the star. Somehow, the speedrunner knew exactly where he was. 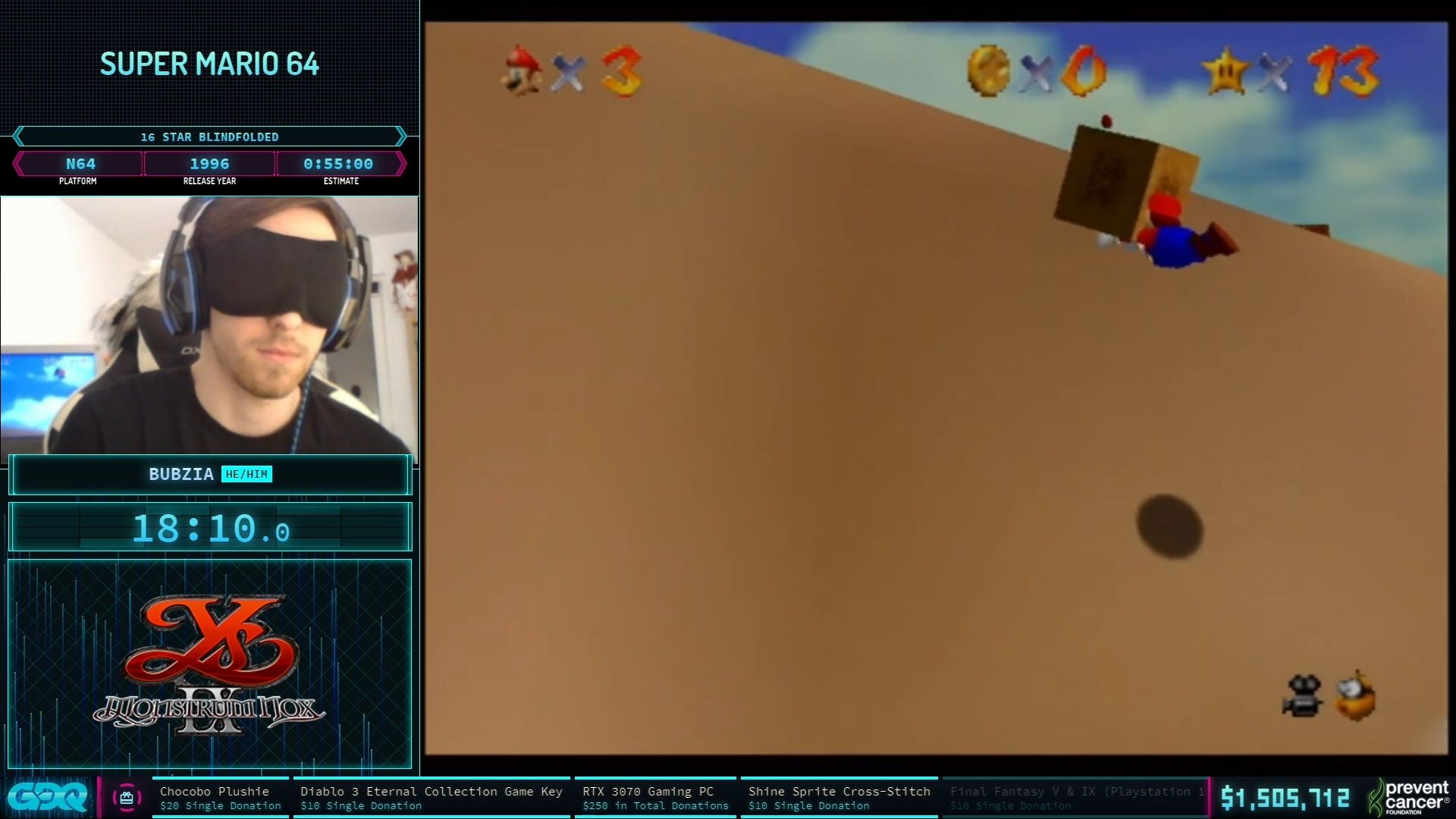 The last Bowser battle was very intense. Bubzia was down to two lives as the chaos of the fight surrounded Mario. Bowser’s charge towards the bomb came late, and Mario was nearing the edge. When it finally happened, all that remained was to throw Bowser. He couldn’t cheese it during the final encounter after simply pushing Bowser off the edge the last times. The bombs weren’t close enough to push Bowser into. By listening to the woosh sound, he knew exactly when to throw him. There was a moment of doubt until he heard Bowser thud to the ground. He won and collected that well-deserved star. He beat Super Mario 64 in just 39:09.

This isn’t the first time Super Mario 64 has been played unconventionally. A Twitch streamer CZR completed the game with a drum kit in 56:36 minutes. The drums, pedals, and cymbals were all designated as buttons on the N64 controller. A modder, SuperLouis64, created a Kinect version of the game earlier in 2020. When he jumped with a mini trampoline, Mario jumped. When he punched, Mario punched. Surprisingly, it looked pretty intuitive.

Super Mario 64 released almost 25 years ago, and fans of the game are still finding new ways to play it. With that in mind, we challenge someone to finish the game with the Donkey Konga bongos like how Limen123 played Kingdom Hearts: Melody of Memory with the bongos a few weeks ago.

Related posts:
01/09/2021 News Comments Off on Speedrunner Beats Super Mario 64 Blindfolded In Just 39 Minutes
Hot News
Frogwares Reveals More Details About Upcoming Sherlock Holmes Game In New Video
Destiny 2: A Complete Guide To Spider’s Wanted Bounties
Resident Evil – erster Trailer für Multiplayer-Shooter Re:Verse veröffentlicht
Vicarious Visions Has Been Merged Into Blizzard
Operation: Orphix Venom Hits Console Version Of Warframe With Mecha-Sized Fist
Recent Posts
This website uses cookies to improve your user experience and to provide you with advertisements that are relevant to your interests. By continuing to browse the site you are agreeing to our use of cookies.Ok