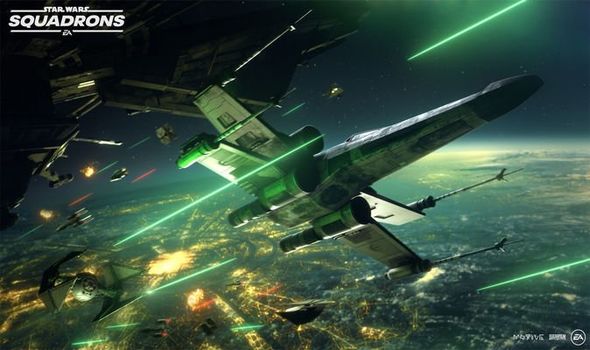 Players have already seen free cosmetics released as part of a free tie-in with the Mandalorian series.

And now the big Star Wars Squadrons 2.0 update is available to download and experience across different platforms.

The reasoning for the naming is the development team at EA Motive consider this a major upgrade for Squadrons.

This includes changes being made to the progression systems, with the dev team trying to combat issues with players exiting games.

“A new forfeit system has been implemented for Fleet Battles, replacing the old “Safe to Leave” and “Match Not Scored” system. We felt that the previous system was often difficult for players to understand and unduly punished well-behaved players after an abandonment occurred, with some players reporting that they felt robbed of wins, locked into pointless matches, or unrewarded for time already spent when leaving “safe to leave” games.

“The new forfeit system puts control back into the players’ hands and allows players to decide which matches are worth fighting until the end and which are worth forfeiting.

“Meanwhile, players that abandon will be appropriately punished: abandoning the game after deployment always results in a loss and leaver penalties have been significantly increased.

“Players will also notice that we have a new lobby backfill mechanic. While players are in the briefing room/hanger, we will attempt to backfill open slots, even in ranked games. Players that leave the game during the briefing room/hanger stage will not record a loss, but will still suffer some leaver penalty points (though not nearly as severe as abandoning the game after deploying into the map).

“Overall, we hope that these changes will mean that players will play in full games much more often, and, when things do go wrong, players will still be properly rewarded for their time and feel more in control of their experience.”

According to the official patch notes, more than 270 other fixes were made, which makes for a long read, with the changes listed below:

In addition to the updated lobby system, we’ve also implemented two other notable changes for Fleet Battles: Improved AI functionality (detailed below) to prevent AI farming issues and the option to reset your rank during this Operation.

The latter will help players who got stuck at Rank 0 get out of this state and also let players who have been able to rank normally reset themselves if they wish to since the Rank 0 issue may have unfairly calculated their skill rating when fighting affected players.

We’ve also included a change to Capital Ship behavior to make “mosquito-ing” (the act of hiding under a Capital Ship and dealing damage into it) less of an issue. This will reward the playstyle of players who are flying like proper mavericks. To those who aren’t, you’re much more likely to be blasted into oblivion now.

11/05/2020 News Comments Off on Star Wars Squadrons update: Big PS4 and Xbox One 2.0 patch notes revealed
Hot News
How I didn’t get a PS5 delivered by Amazon – Reader’s Feature
Why I’m worried Cyberpunk 2077 is going to be a disappointment – Reader's Featur
5 Hidden Gem Games You Missed In 2020
2019 Was a Major Inflection Point for VR—Here's the Proof – Road to VR
Fallout 76 Steel Dawn: How To Get The Hellstorm Missile Launcher
Recent Posts
This website uses cookies to improve your user experience and to provide you with advertisements that are relevant to your interests. By continuing to browse the site you are agreeing to our use of cookies.Ok