The Pokemon TCG’s latest expansion takes us back in time, with Astral Radiance revisiting the Hisui region we first saw in Pokemon Legends: Arceus. Joining Brilliant Stars’ VSTAR cards are brand new Radiant Pokemon, which are so powerful you’re only allowed one of in a deck.

For collectors, there’s a lot to love in this set. Whether it’s seeing faces from Hisui in card form for the first time, or the numerous gorgeous full-art cards, Astral Radiance is a great set to just chill and crack packs with. But which cards are the ones you should most keep an eye out for? Here are the top ten most valuable cards in Sword & Shield: Astral Radiance.

For these prices, we are using the average market value, as listed by TCGPlayer on the expansion’s launch day (May 27, 2022). Prices do fluctuate over time, though, meaning prices may not be identical to what they were at the time of writing. 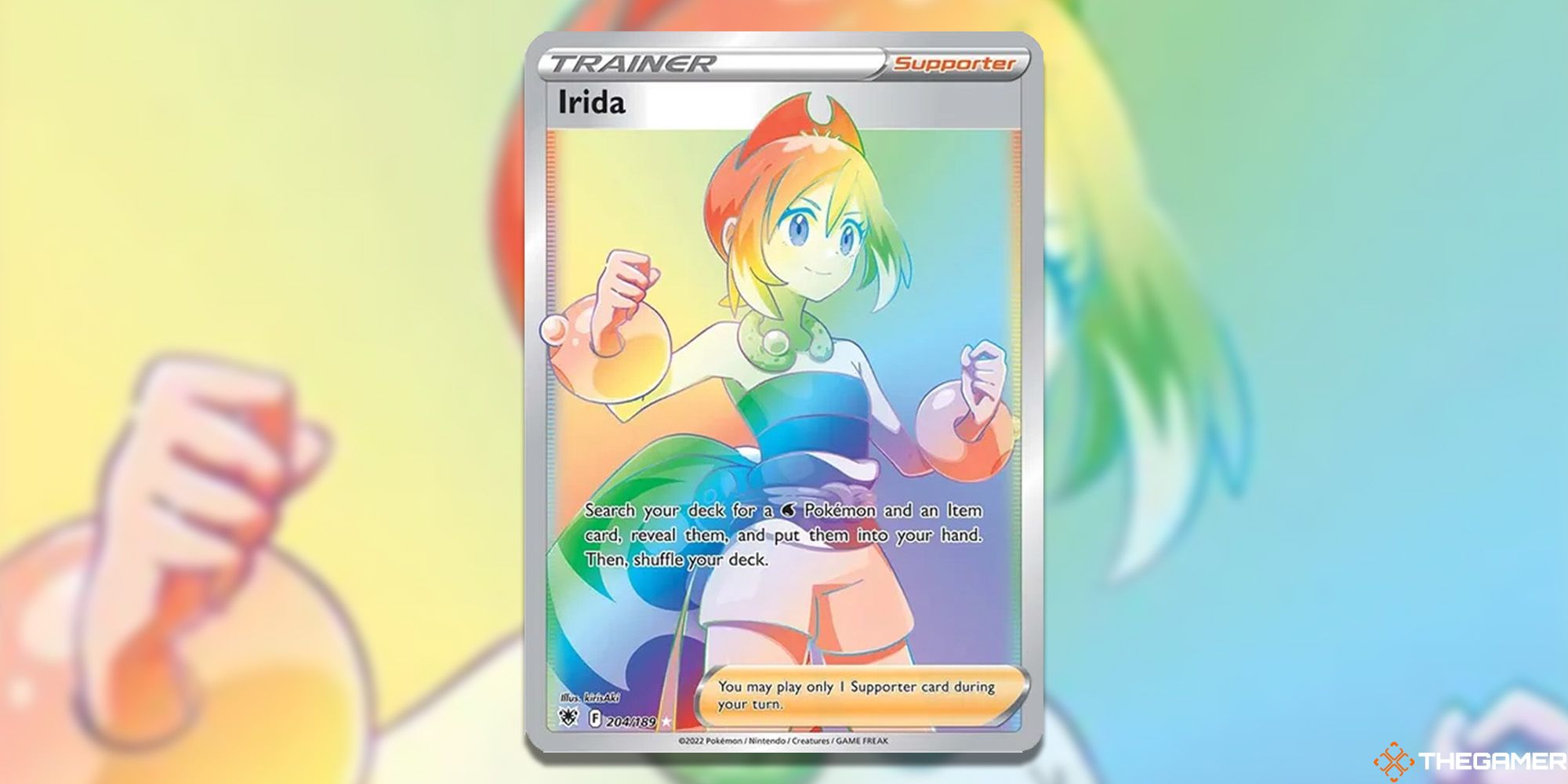 The chief of Hisui’s Pearl Clan is the only trainer to appear on this list, despite other popular names like Adaman and Melli showing up in Astral Radiance as well.

This version of the card is one of the set’s rainbow rares, where all the colour is replaced with a holographic rainbow effect instead. Usually, these versions don’t tend to value as highly as regular alternate art or gold secret rares, but they still look great. It helps that the art for Irida is so nice and crisply rendered to help her stand out on the rainbow background. 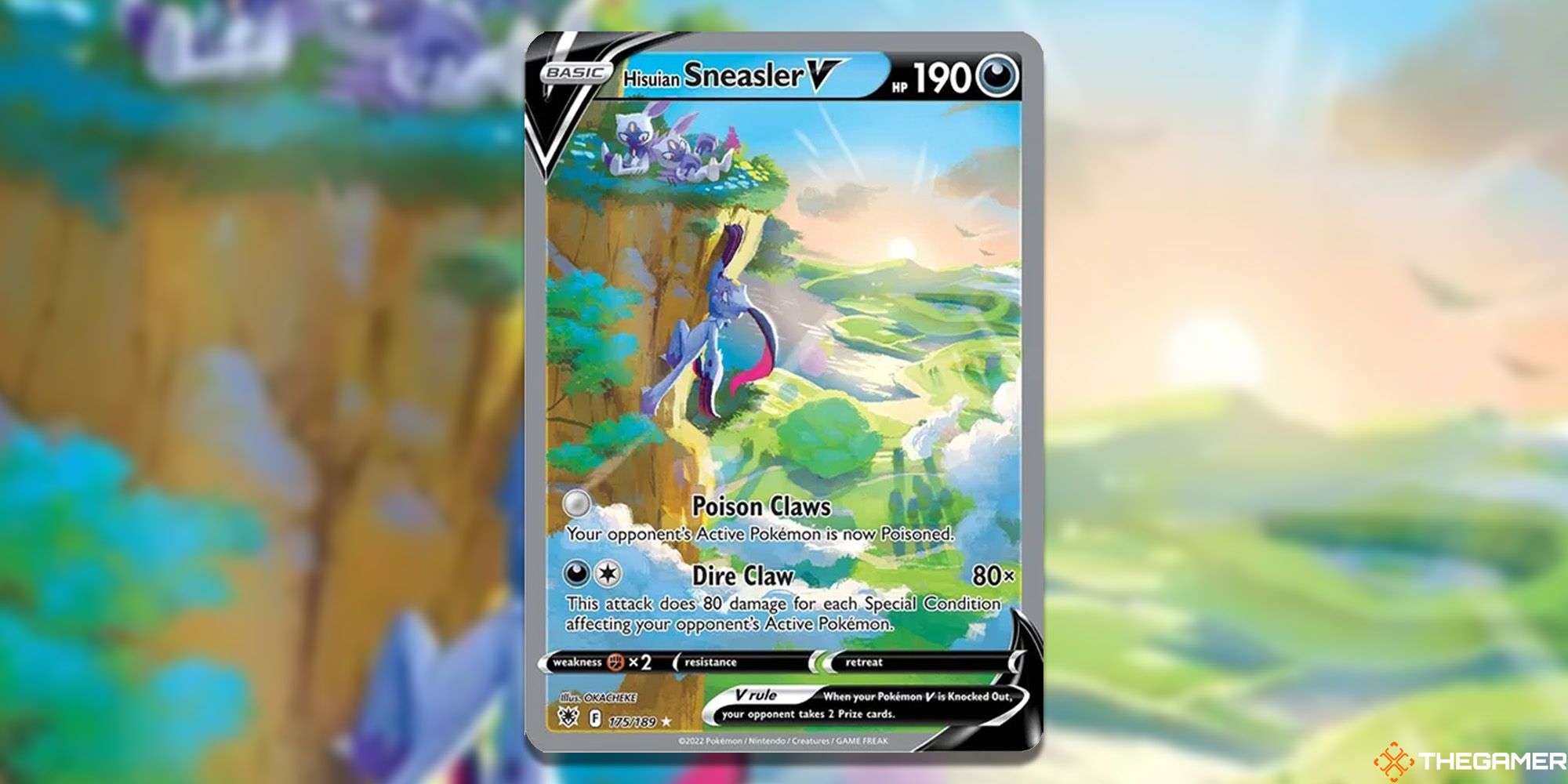 As this is a set based on Legends: Arceus, of course we were going to see the debut of a number of new Hisuian Pokemon. The first on this list is Hisuian Sneasler, a new evolution of Sneasel that is used in Legends to help traverse the many rocket cliff faces dotted throughout the region.

The alternate art for Sneasler is beautiful, showing a vista of Hisui as Sneasler claws its way up to a nest of playing Hisuian Sneasels. The card itself is pretty great too, as it encourages you to stack your opponent up with status effects, like the poison it gives with Poison Claws, before dropping a Dire Claw to deal big damage. 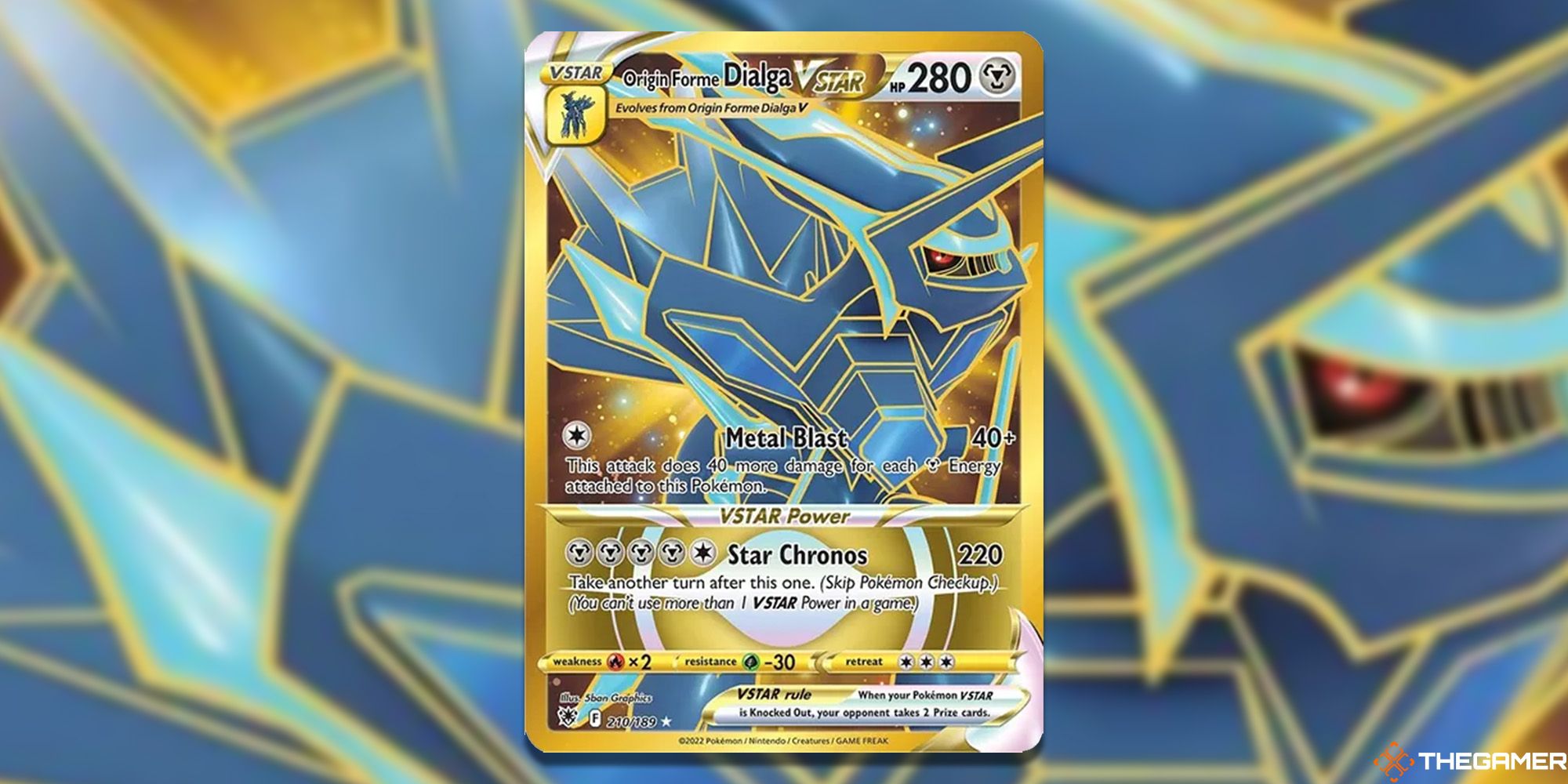 VSTAR makes a return following its debut in Brilliant Stars. Each VSTAR has its own VSTAR Power that can only be used once in a game, but is utterly devastating to make up for it.

As Dialga is the embodiment of time itself, its VSTAR power is one of the strongest we’ve seen so far: taking an extra turn. While you likely won’t see this card much in Standard, it’s going to be much more prevalent in the Expanded format, where you can grab multiple extra turns all at once.

Golden rare printings tend to be the most valuable of the two common secret rare styles (the other being rainbow rares), which can be seen by no other art for this card appearing in the top ten. The rainbow rare is almost half the price, at $26.83, while the non-secret rare edition is just $15.81. 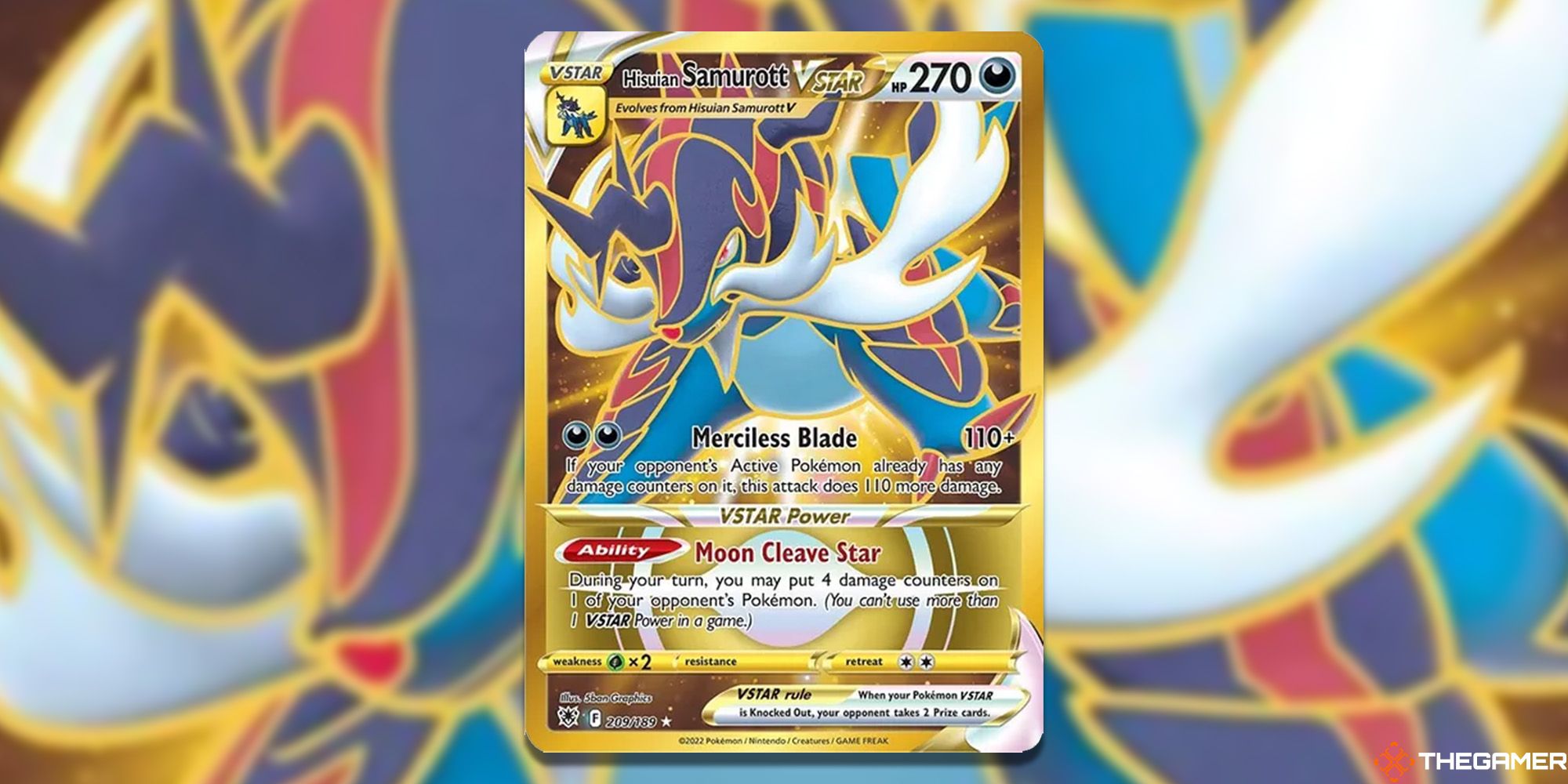 The only starter Pokemon to appear on this list is the one that received the least hype in the run-up to Legends: Arceus’ launch. Despite that, people really want the gold rare version of Samurott in particular. It is one of the few cards where the gold style actually works in its favour, though, with the outlining helping the dark blues and reds pop even more.

Samurott is great for sweeping large Pokemon out of the way through its Merciless Blade attack. Dealing 220 damage to an already-damaged Pokemon will often be enough to knock it out, but if it isn’t you’ve always got its VSTAR power, Moon Cleave Star, to help finish them off. 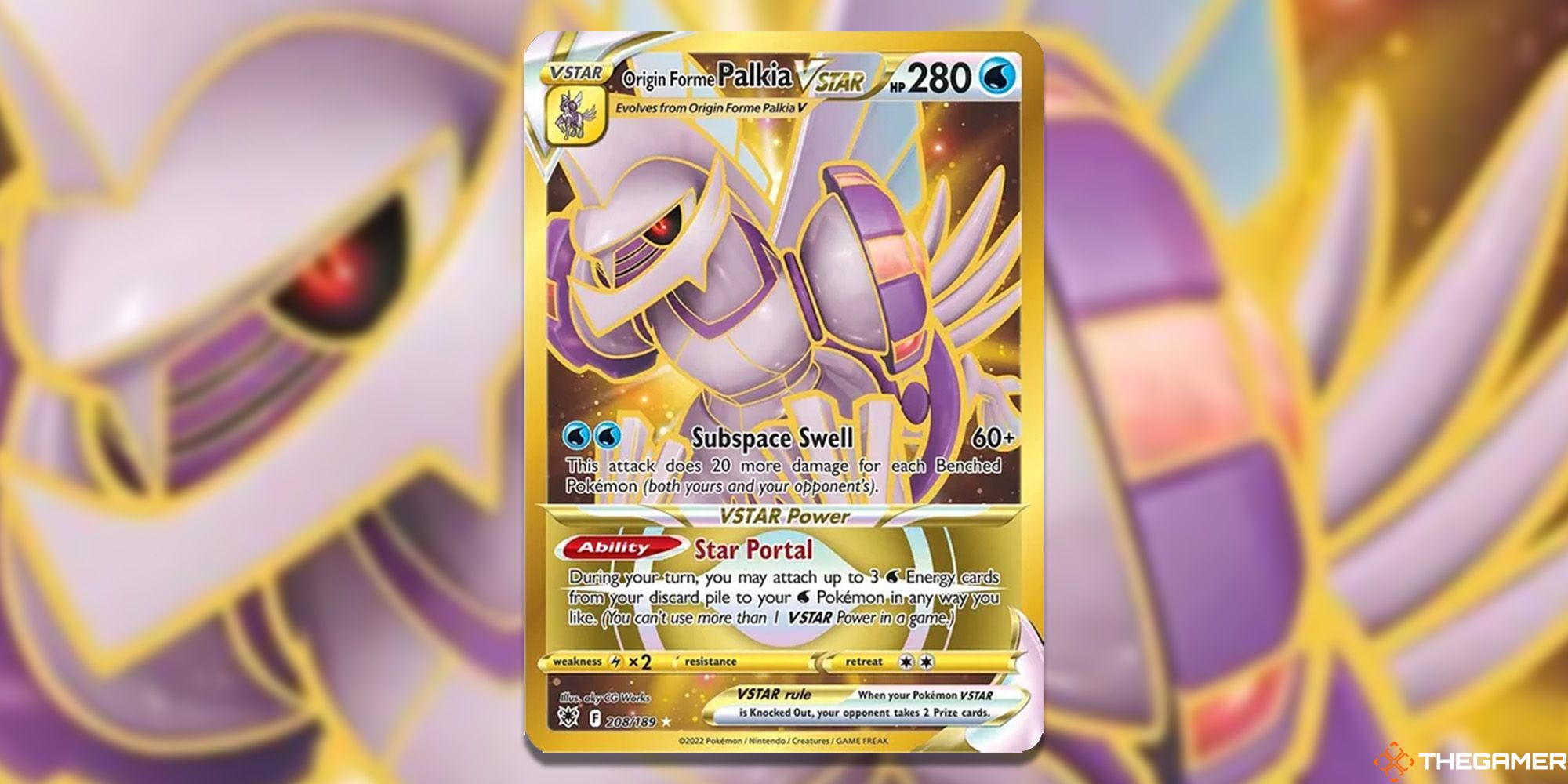 Dialga’s VSTAR power giving you an extra turn is powerful in Expanded, it’s mostly Standard that shifts packs one of the cards to most be excited for in Astral Radiance is actually its space-bending counterpart, Palkia VSTAR.

At first glance, the abilities seem a bit underwhelming until you realise Subspace Swell also adds damage based on your opponent’s benched Pokemon. Two full benches is a hefty 260 damage – give it some buffs like a Choice Belt and it’ll be able to take out almost any Pokemon in a single hit.

This is a card that’s already seen a lot of play in the Japanese card game, and so its value being so high here makes complete sense. 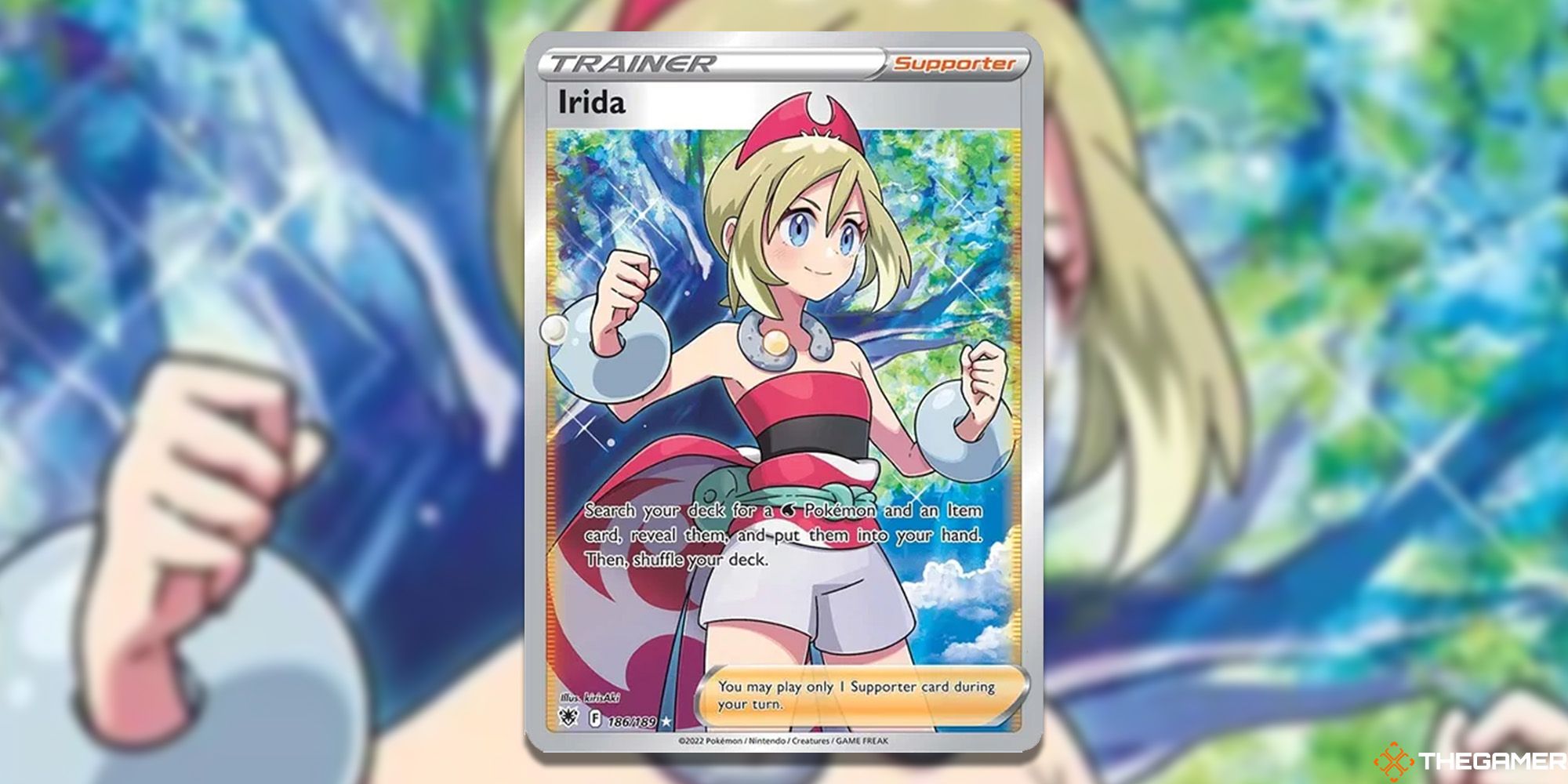 Palkia VSTAR’s popularity also explains how Irida is doing so well. Because of her ability to search for a water Pokemon and an item, you can easily pull out Palkia VSTAR and the buff item needed to get it online incredibly early.

The two seem tailor-made for each other, and with Palkia VSTAR threatening to become such a powerful deck following Astral Radiance’s launch, everyone wants to get their hands on all the pieces as soon as possible. 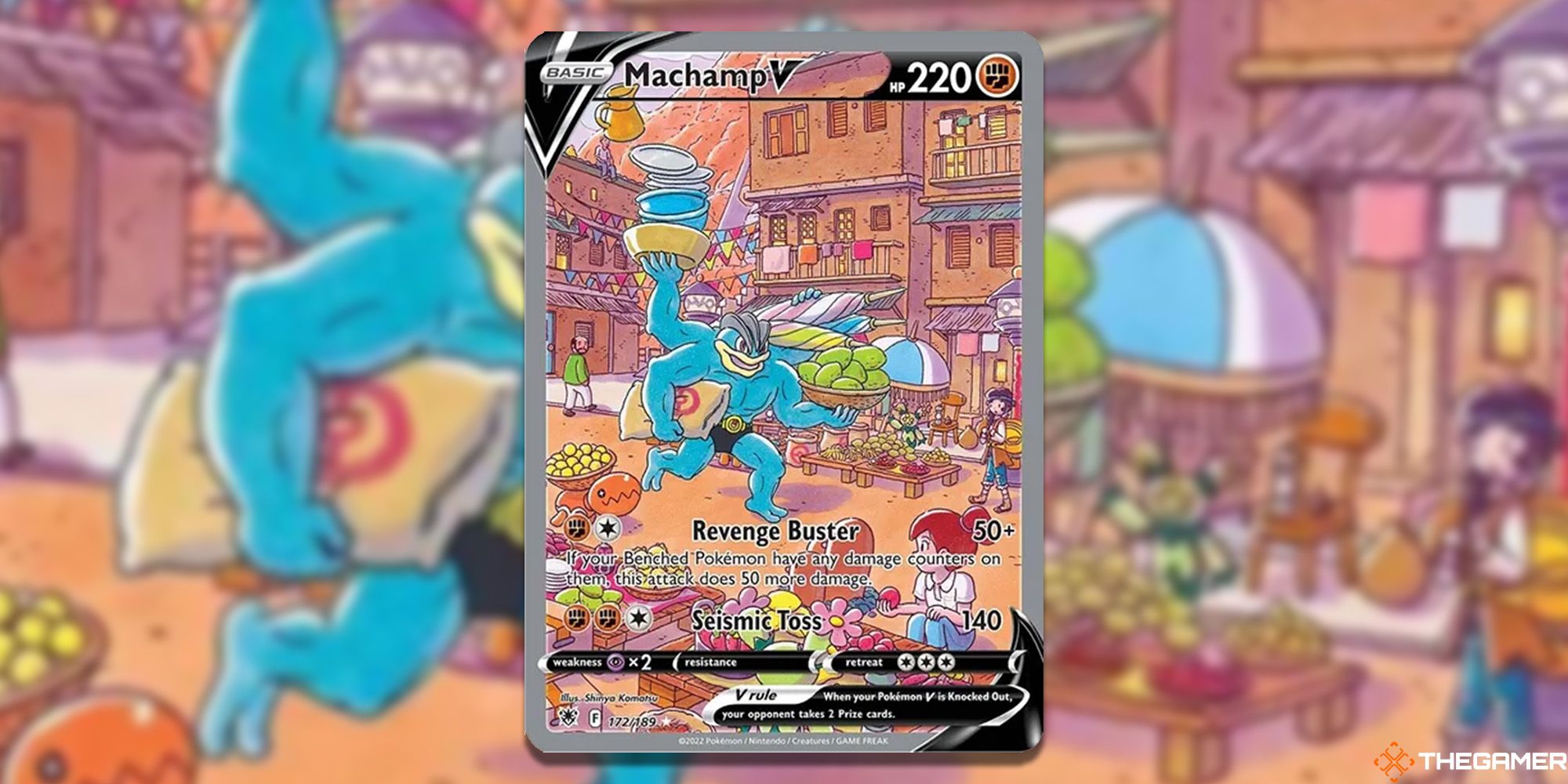 While some cards are valuable because of the impact they’re going to have on the game, others are worth what they are through vibes alone. Machamp V is definitely the latter.

The secret rare art evokes earlier expansions, like Battle Styles’ hungry Tyranitar and Evolving Skies’ gigantic VMAX Eeveelutions, by just showing the day-to-day life of a Machamp as it carries out its errands in the Stow-on-Side market. It’s a sweet slice of life card that always proves to be a hit with collectors.

We’ve already gone over why Palkia VSTAR is going to be such a bomb for the game, and so its golden rare popping up here proves a second point: people love to bling out their decks. Taking your opponent down with a top-tier deck is fantastic, but being able to do it while also flexing with a fancy secret rare version is even better.

If you were wondering where the base Palkia VSTAR sits, it is currently at #11, just below Sneasler V at $33.98. 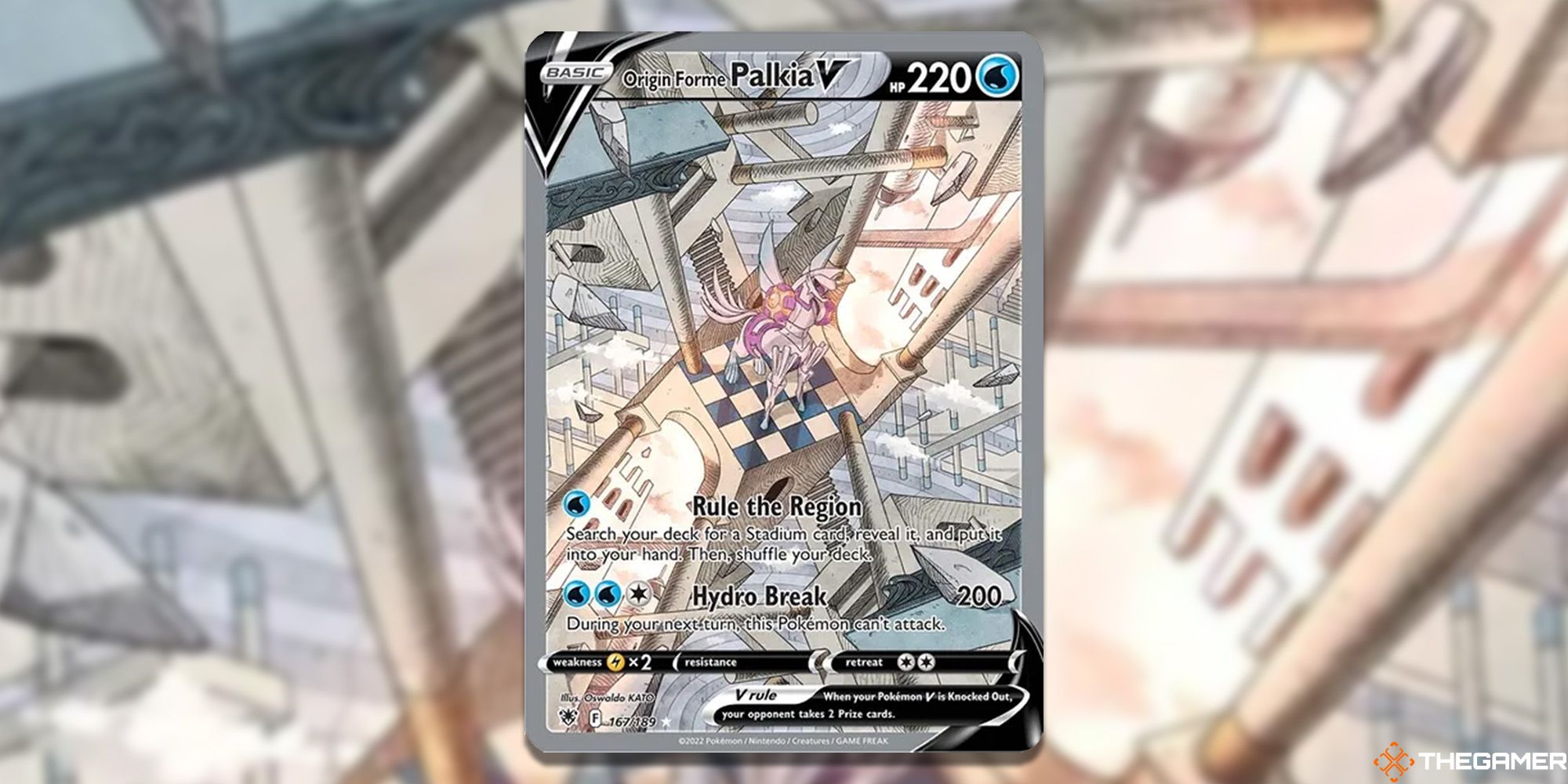 In order to unlock that one-hit knockout potential of Palkia VSTAR, you’ll need to evolve it from a Palkia V first. That’s likely not why this version is valued so highly, though: just look at that art.

Befitting the controller of all physical space, it’s a genius move to put Origin Forme Palkia in a bizarre, M.C. Escher-esque landscape of twisting geometry and floating pillars. This is some of the most striking art we’ve seen on a Pokemon card in a very long time, and it being part of such an essential deck only makes it better. 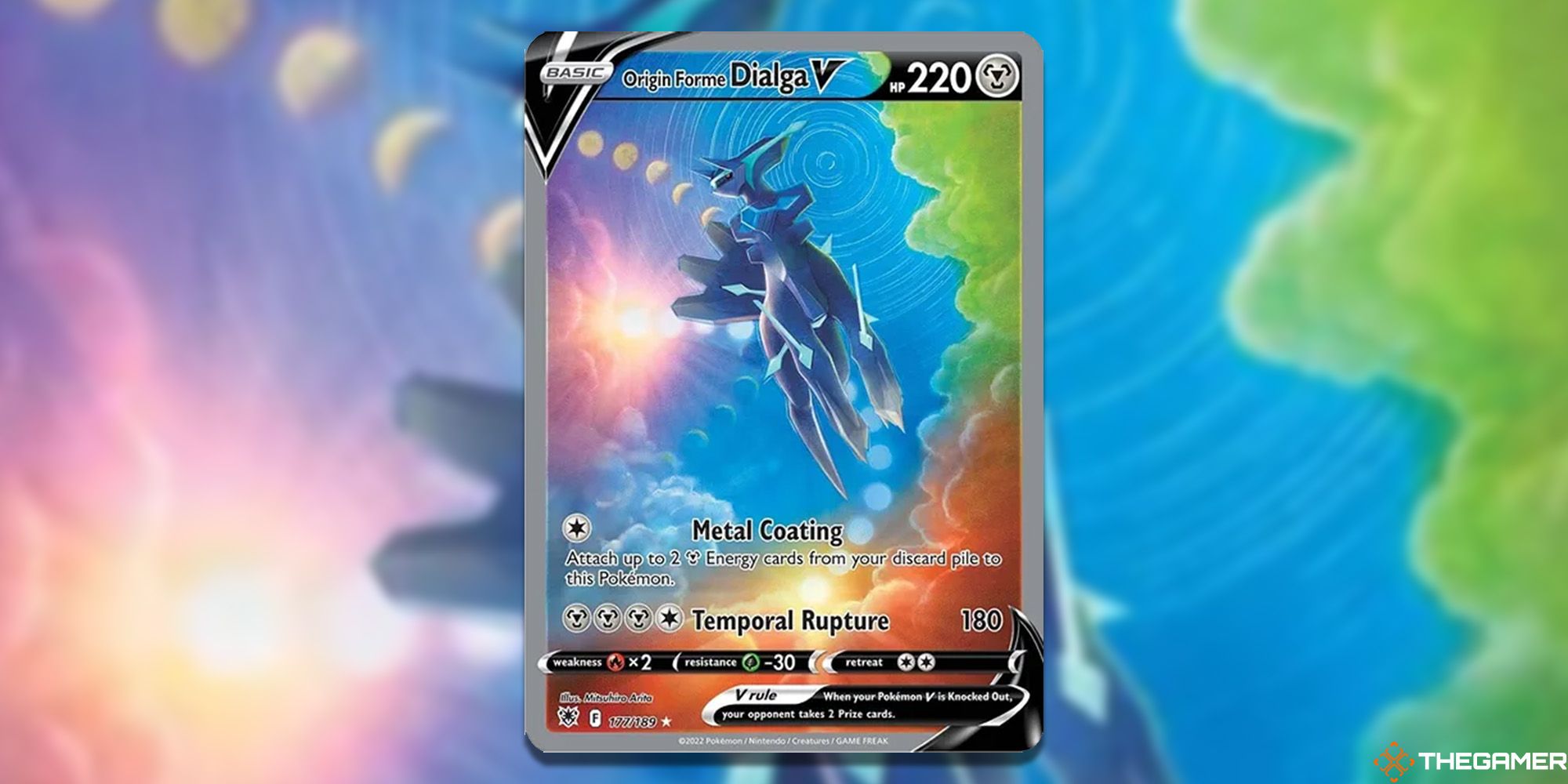 Palkia may have beaten out Dialga for VSTAR supremacy, but when it comes to the basic V forms, Dialga back on top with this stunningly colourful alternate art.

From the phases of the moon slowly progressing across the sky, to the swirl of stars as the planet spins in space, there is so much attention to detail to make this art so sublime. While it does serve a role in Dialga VSTAR decks, being required to evolve the VSTAR form, this one is likely the most valuable simply because of how good it looks. This is a card any collector will want in their binder, and people are willing to shell out over $100 for it.

That being said, the price of Dialga V has dropped significantly between the expansion’s prerelease and its launched. It may not be long until Palkia regains its throne.