Indie action RPG Eiyuden Chronicle: Rising has a lot going for it. The smaller-scale prequel to the upcoming Eiyuden Chronicle: Hundred Heroes is full of personality, with a vibrant and gorgeous art style, a memorable cast of characters, and a number of gameplay mechanics to keep you engaged.

The action RPG's various systems are bolstered by a surprisingly robust inventory of items you'll be equipping, consuming, and upgrading throughout the game. From stat-boosting food to essential accessories, there's a lot of variety at play. Here are some of our favorite items you'll find in the game. 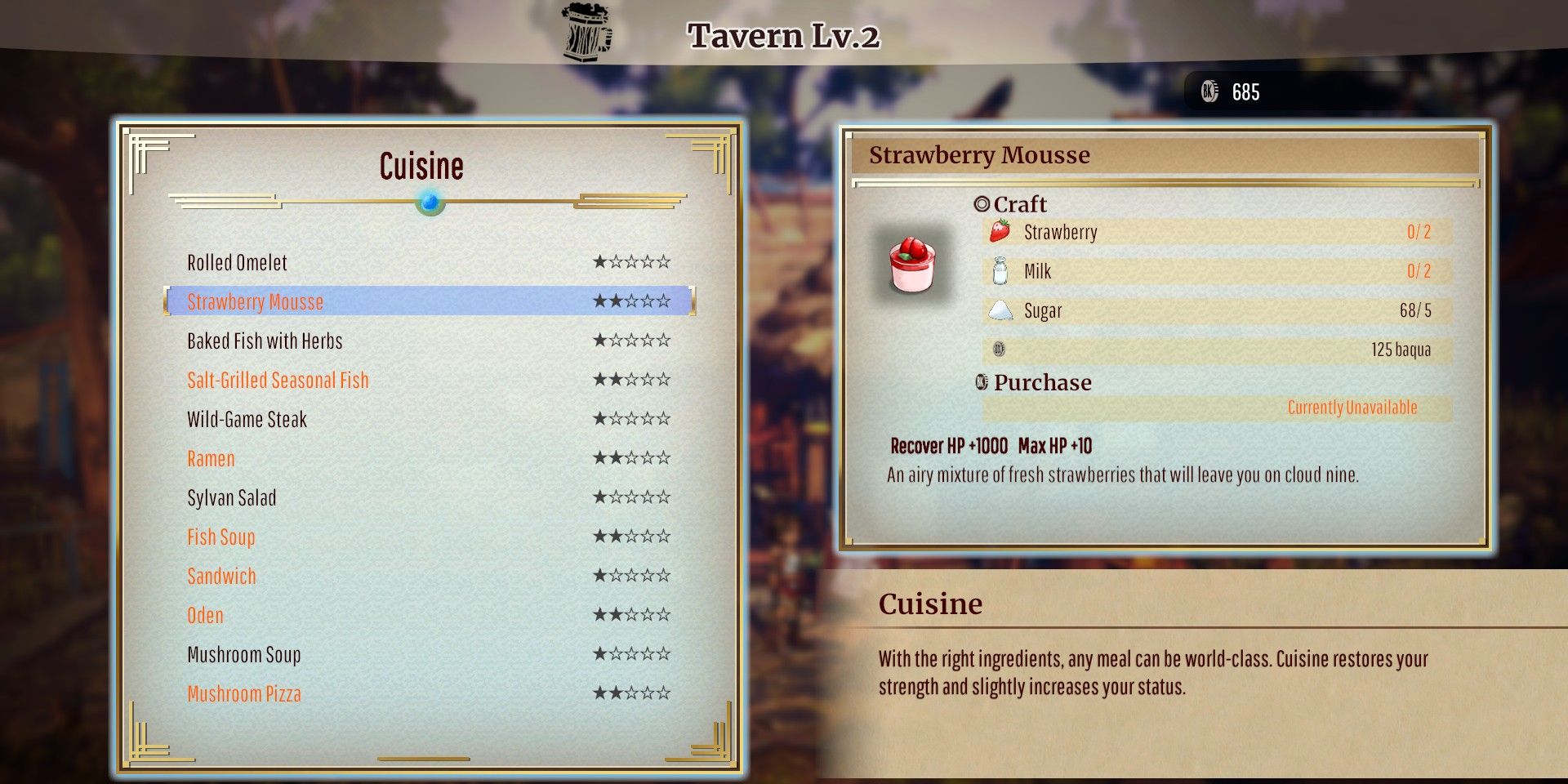 Once you gain access to the tavern through one of Eiyuden Chronicle: Rising's many side quests, you'll be able to use the items you've gathered while adventuring to craft various food items for immediate consumption. On top of sounding quite delicious, these tasty treats will not only heal you, they'll typically give you a stat boost of some sort until the next time you rest for the night.

One of the Tavern's most useful meals is its Strawberry Mousse, accessible after upgrading the facility through a side quest acquired by the Tavern owner, Savita. The sweet dessert heals you for 1,000 HP and temporarily increases your max HP by 10, an upgrade from the 500 HP and 5 HP boost you'll get from the Rolled Omelet recipe. Though these items must be used immediately upon crafting or purchasing them, they'll still last you a good long while, as long as you don't call it a day too soon. 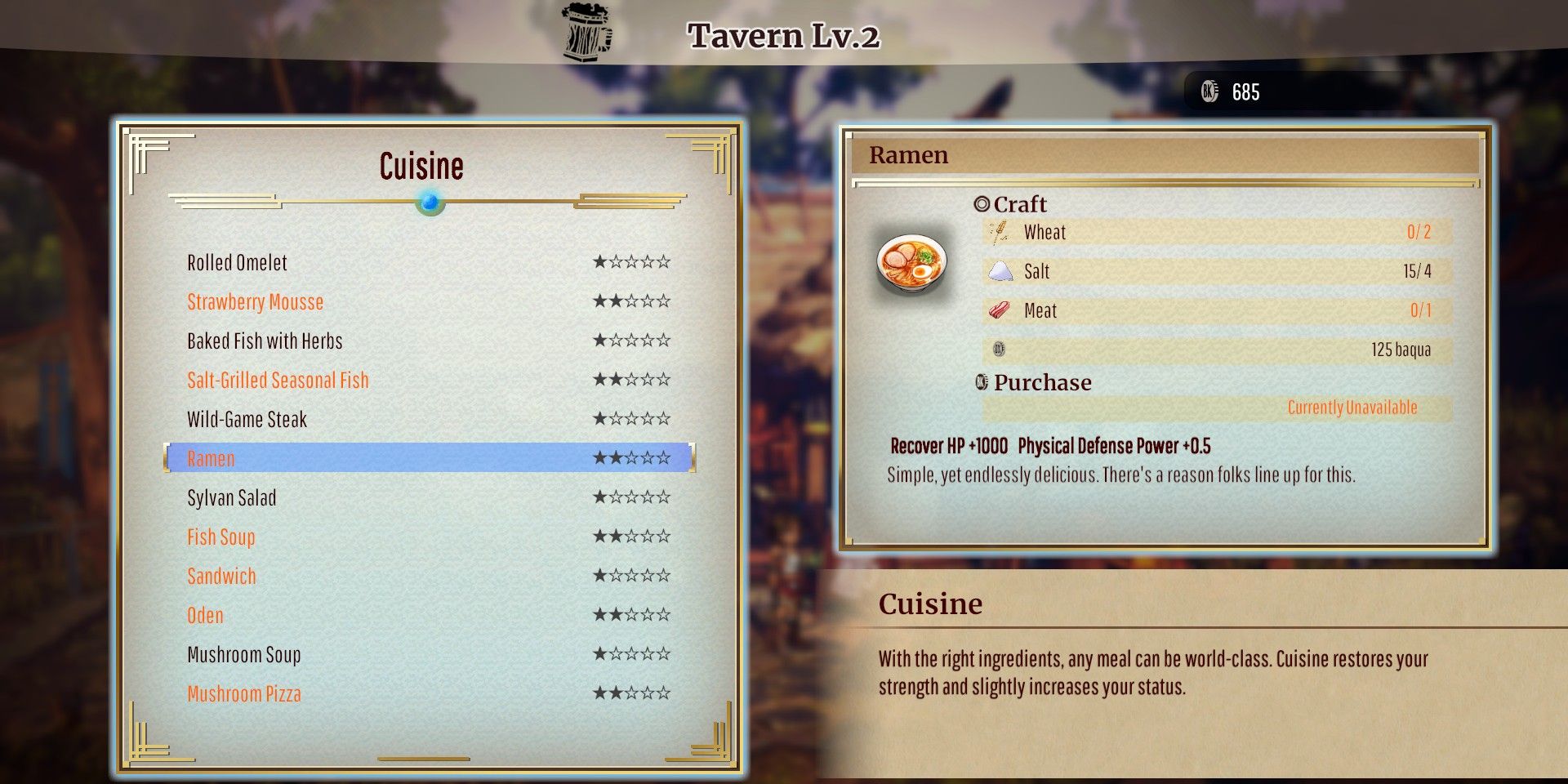 Another of the Tavern's delectable meal options, Ramen will provide you with the same 1,000 HP healing as the Strawberry Mousse along with a .5 bump to your defensive power.

When low on health due to a particular challenge, this is a great alternative to resting for the evening, as you'll receive a small buff rather than simply losing the stat increases you were hanging on to. 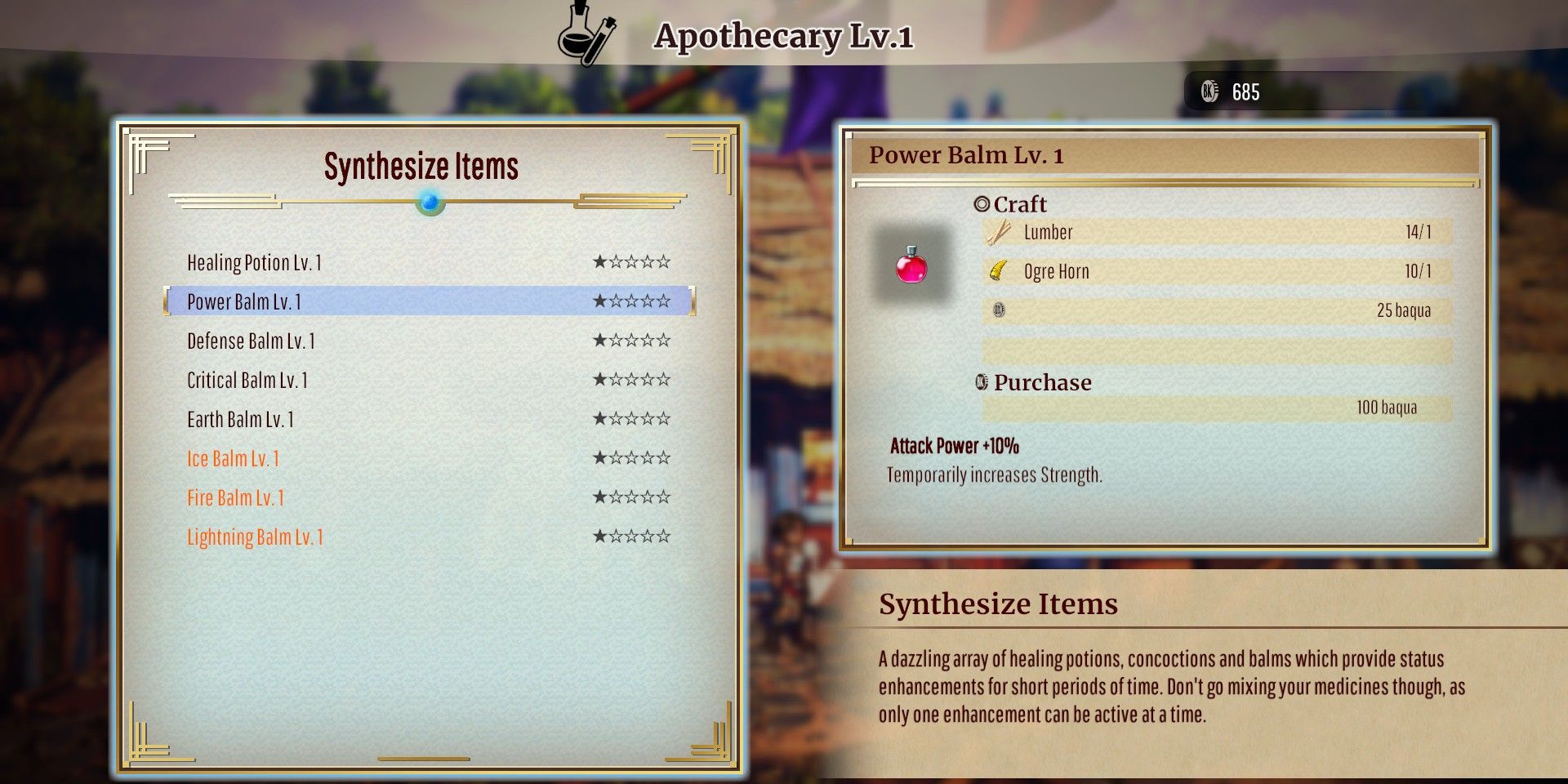 One of the potions unlocked after opening the Apothecary, the Power Balm is extremely useful. Boosting your attack capabilities by ten percent, the potion stands above most other attack buffs in the game, though it can't be combined with other balms and potions that may boost your abilities.

Another bonus of potions and balms is the ability to carry them with you in your inventory. While the food items present at the Tavern are useful and provide healing as well as stat boosts, they must be consumed immediately after crafting them. Balms like this one provide an option to carry your buff with you, holding on to it until you really need it. 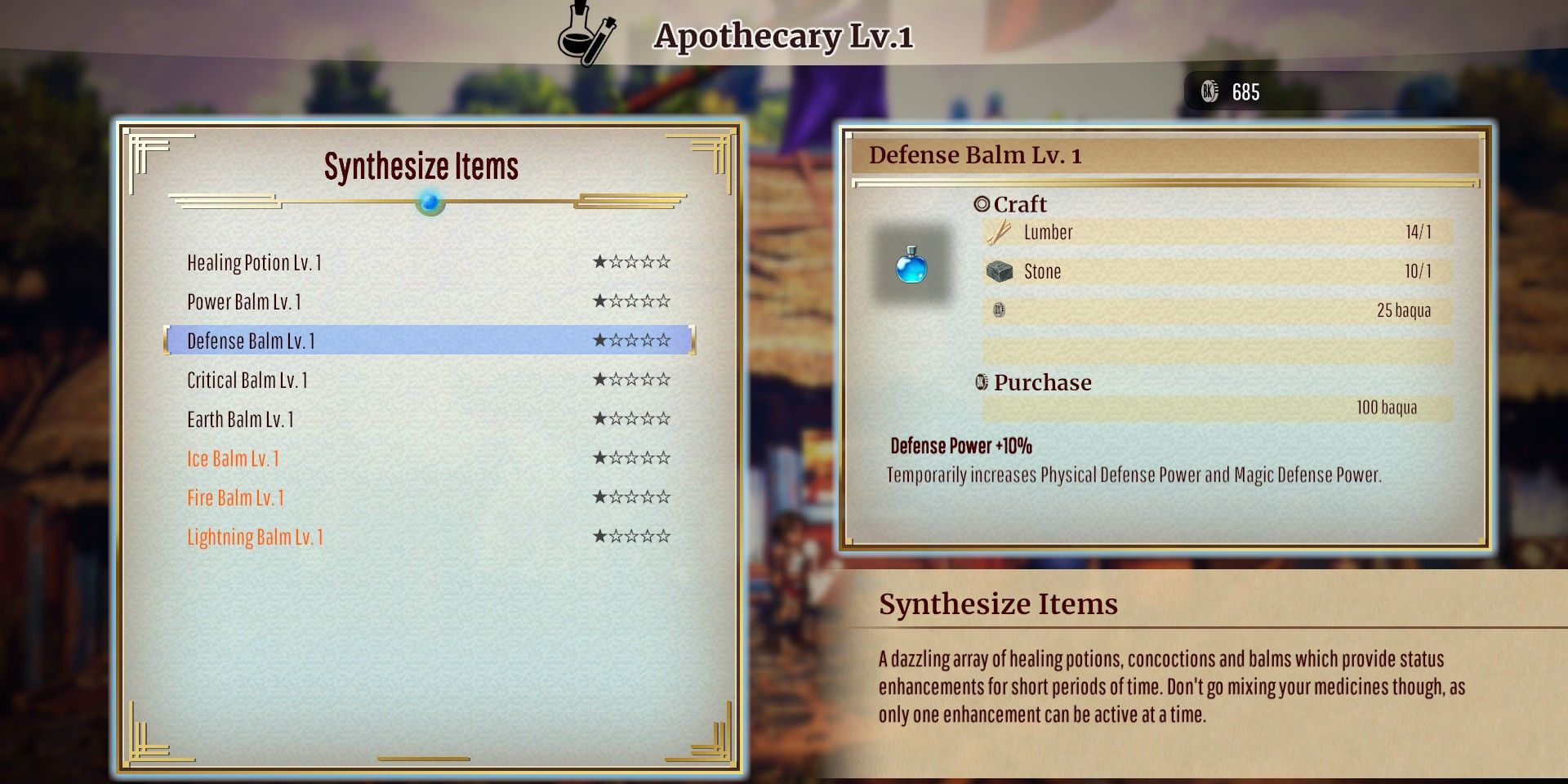 Similar to the Power Balm, its defensive counterpart will raise your overall defense by ten percent, giving you a nice edge against the more heavy-hitting opponents you come across.

Even if this Balm can't be combined with other Apothecary items, it's still extremely useful to have with you in a pinch. And like the Power Balm, you can bring it with you and use it where appropriate. 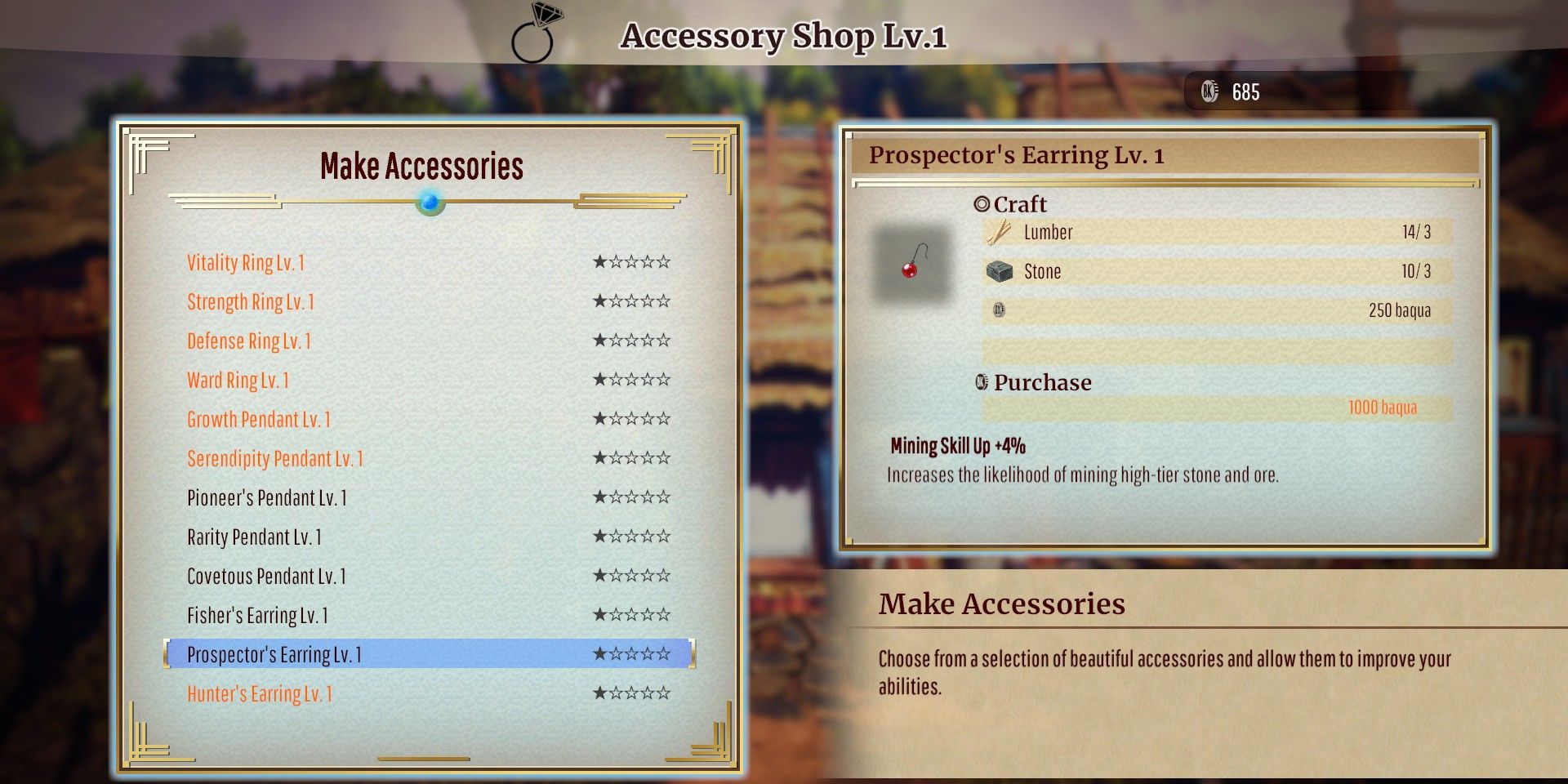 Another of the storefronts unlocked by helping out the townspeople of New Nevaeh, the Accessory Shop provides you with a variety of new equipment for your party members. Some of these accessories are truly unique, boosting stats as long as they're equipped as opposed to only lasting until you rest for the day.

One such accessory is the Prospector's Earring, which boosts your mining ability by four percent. When trading items or upgrading equipment, top-tier ore and stone are invaluable, and this item will help boost your discovery of such items. It's extremely useful, especially if you plan to rank up your weapons and armor later and in the game. 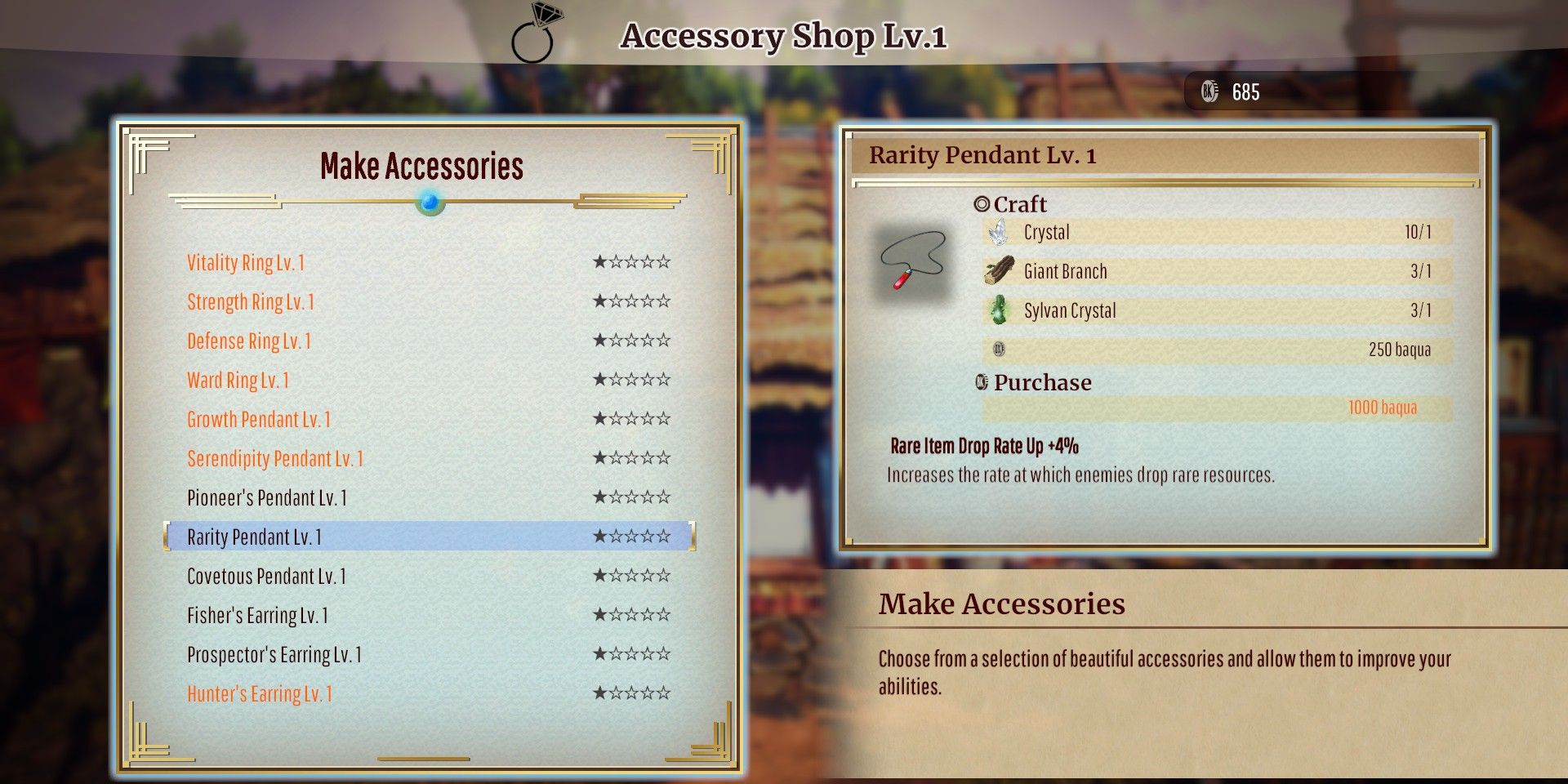 Another item attained from the Accessory Shop, the Rarity Pendant helps increase the number of high-quality loot that's dropped by random enemies.

Unlike the Prospector's Earing, which is solely focused on mining, the Rarity Pendant increases item discovery across the board, with a wide variety of loot for upgrades, crafting, and trading in the game. 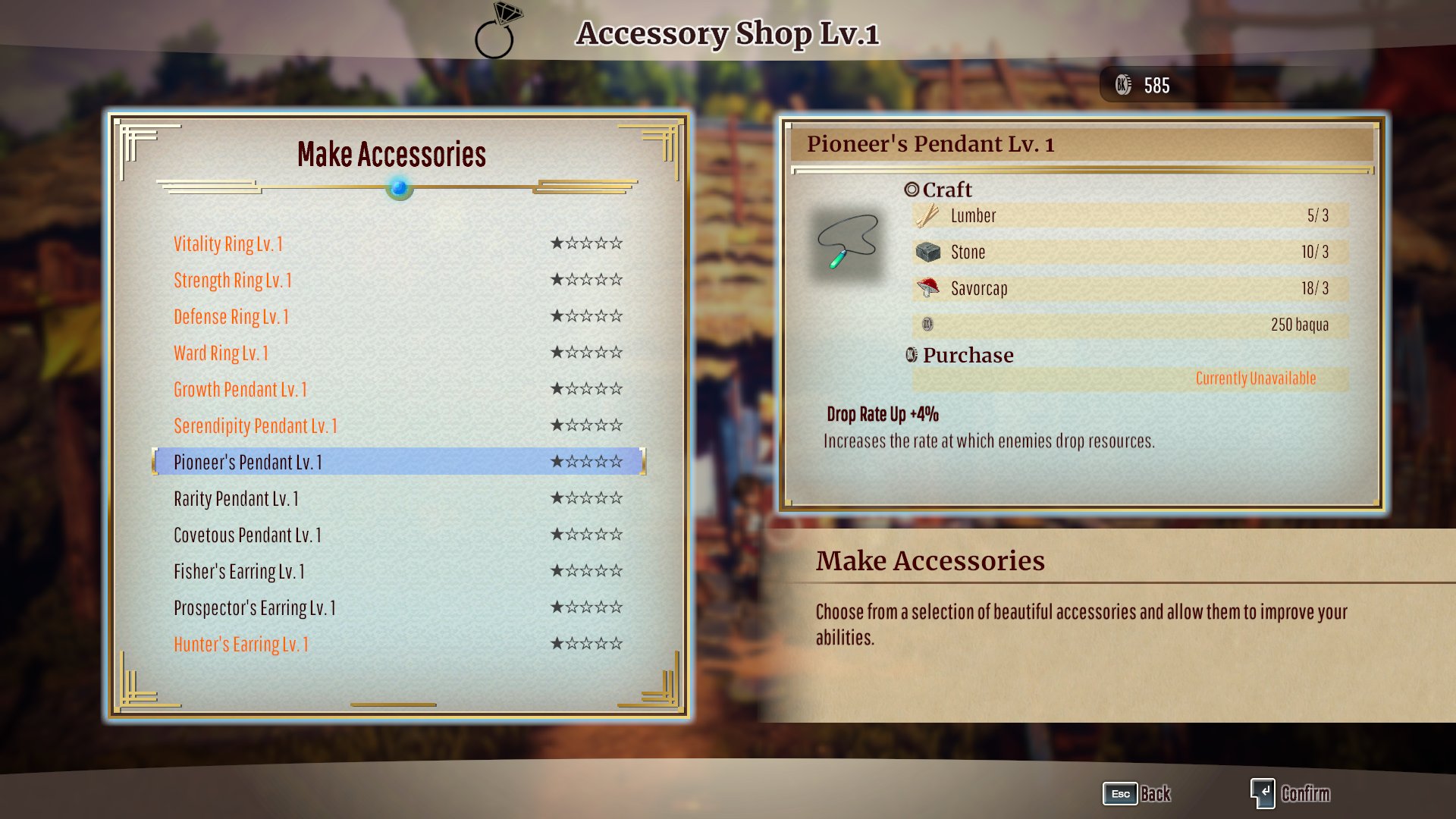 For a game like Eiyuden Chronicle: Rising, a large part of your experience will be collecting items for a variety of tasks. Whether trying to attain new equipment, completing requests from people around town, or opening new shops and facilities, you'll want to stock up on the most attainable drops for one reason or another, and you may be surprised at how quickly you can burn through your supply.

For these reasons, the Pioneer's Pendant accessory is useful in a pinch. It increases the number of items dropped by enemies, helping you to collect on the loot you may be hunting down. When you're having trouble completing a citizen of New Nevaeh's request, or attempting to maximize your equipment with the right crafting material, this accessory can be surprisingly helpful. 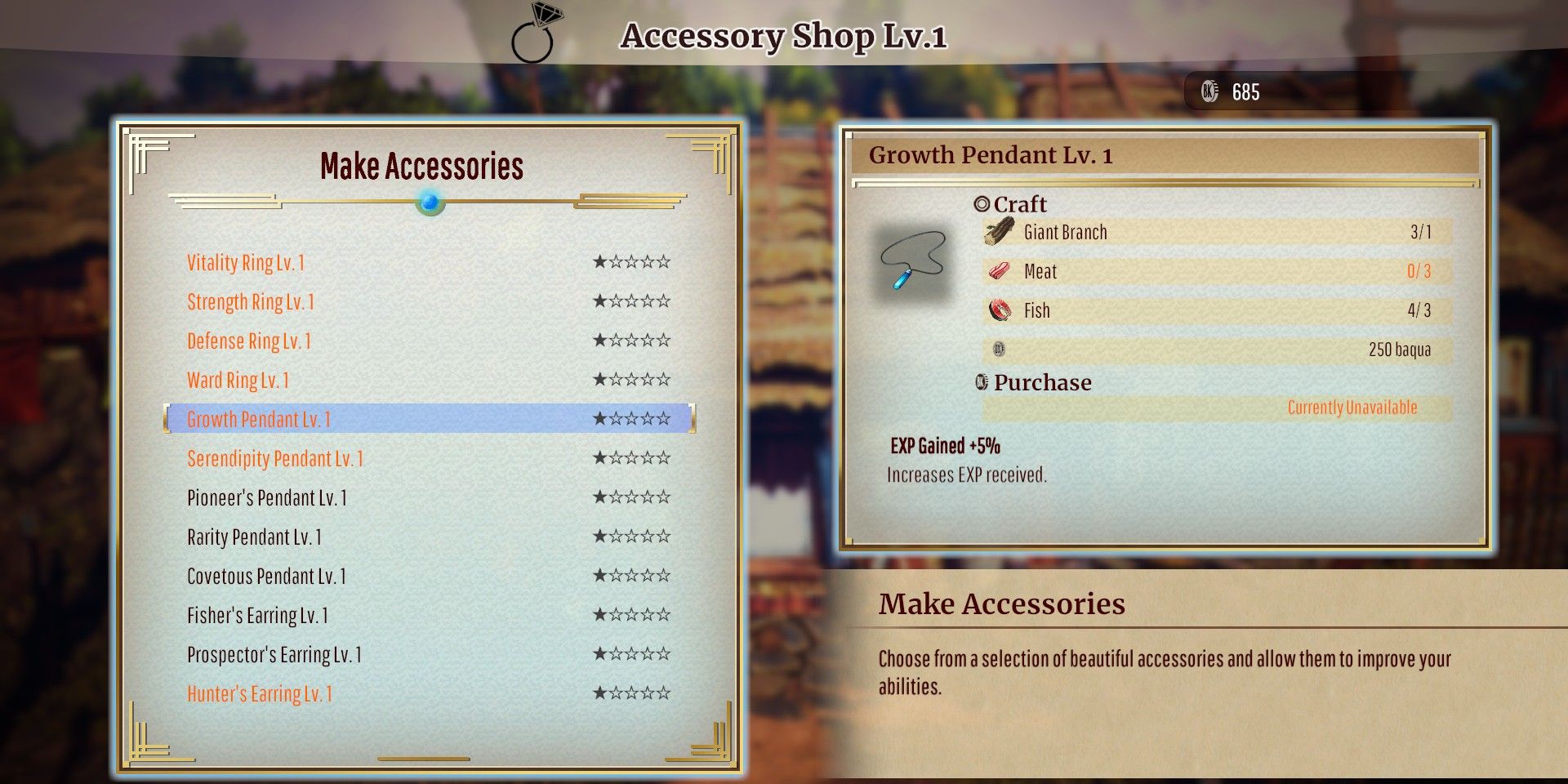 In any role-playing game, gaining experience through battle is a core part of your experience, and Eiyuden Chronicle: Rising is no exception.

You'll watch your experience bar slowly rise as you take down creatures and bosses in the game, and the Growth Pendant can add to that steady progress, increasing the amount of experience you gain by five percent. You'll see your character's strength increase even faster than usual when you have this handy item equipped.