Hey, all of you folks who have been wanting a game about politics: it’s here. The Political Machine 2020, from Stardock Entertainment, arrived this week on the PC, and I played a few rounds of the presidential campaign strategy simulation game on Steam.

It reminded me a bit of the old Parker Brothers board game Landslide from 1971. I first learned about presidential politics in that game, and you can do the same with your family with this title, either in a single-player game or in multiplayer. And this new game gives me an excuse to talk about one of my favorite hobbies: politics.

This version of The Political Machine is a remake of the previous titles (The Political Machine of 2004, 2008, 2012, and 2016), and it’s ripped from the headlines, with this year’s candidates squaring off against Donald Trump. It has 10 different candidates you can choose from, including a fictional “massive comet.” And it has everybody who matters or doesn’t matter: Amy Klobuchar, Andrew Yang, Bernie Sanders, Catherine Cortez, Elizabeth Warren, Joe Biden, Michael Bloomberg, Pete Buttigieg, and Tulsi Gabbard. Besides Trump, you can also run against George W. Bush, a giant meteor, Mike Pence, and Mitt Romney. Romney’s charisma is a comic “cold fish.”

Above: Elizabeth Warren is a Democratic Socialist in The Political Machine 2020.

I did a lot of trail-and-error campaigning. It was a waste of time to go to Alaska, as you learn that every action you take in your 21-week campaign is critical. And you have to go to the states where a lot of electoral votes are up for grabs.

Most states have some kind of political bent, like real life, and it’s pointless for Trump to try to win California. But the battleground states are up for grabs like Michigan, Ohio, Pennsylvania, and Wisconsin. I found I could raise a lot of money for Warren by making frequent visits to the rich states, California and New York. You can do some damage to Trump by solidifying your ideology with various campaign planks, like adopting diversity measures or pledging to fight climate change. You can also bring up the coronavirus and say how bad a job that Trump is doing at handling it.

Playing on the normal difficulty setting, on a first try, I got trounced by Trump. I ran out of money a couple of times as I tried to run media campaigns in too many states, but I could never catch up with all of the ad campaigns that Trump was running in all of the other states. So I now understand that Bloomberg’s money and any other rich donors are going to make a real difference in a Joe Biden or Bernie Sanders campaign against Trump. On a second try, I bumped up my available initial funds and barely won. 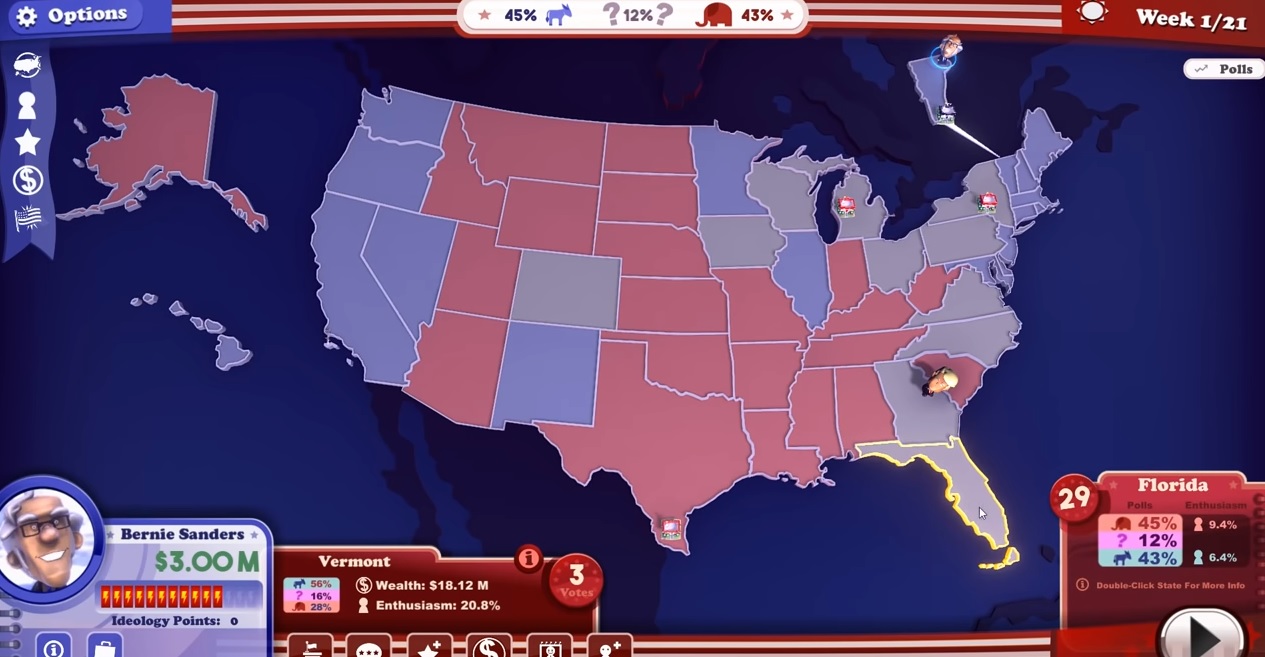 Above: The Political Machine 2020 shows you which states you need to win to be president.

When you hover over the map, you see the electoral votes for a given state, like 29 for Florida, and you can see what percentage of the state’s voters side with you, how many side with Trump, and those who are undecided. You need 270 votes to win the election. Trump gets to place multiple campaign headquarters at the outset, as he has an advantage as an incumbent.

You start the game with $3 million in your war chest, and you can move around the states and raise money, spend it on ads, spend your ideology points, and perhaps spend a lot of money on a dirty trick. Of course, I’m not sure how much work the developers put into revising their game so that it takes into account the financial realities of today. I suspect these imaginary campaign dollar numbers are way off base, and so a real presidential race will turn out much different.

If I went to town hall events that popped up around the country, I could earn ideology points. And as a Democrat, I could only spend points on social justice, the environment, and diversity. But I only had one pool of points to spend on all of those issues. So you see a lot of trade-offs in the game like you see in real-world politics. If you want to win in a state like Oregon, then maybe you better spend ideology points on the environment. If you want to win in Michigan, maybe it makes sense to go after social justice (and raising wages) as your issue.

As a bare-bones remake of an existing game, it’s not bad. The realism of the news embedded in the game makes it feel like a modern simulation, but the animations are pretty lacking, consisting mostly of airplanes flying across the map. You can check out the state of the voters on various issues by clicking on various map types.

I found that this was a nice fantasy. I could simulate how to win the presidency, and also figure out how to think like a political strategist. It was more fun than just speculating about how the race would turn out on social media, as I see so many of my friends doing these days. But I liked its teaching moments and the dirty tricks that you could pull to try to bring important states to your side. I learned that it isn’t all that easy to beat someone like Trump, who has a pile of money to buy the election — as well as a populist message.

At the very least, the game will give you grist for a conversation about politics with your family or friends, and it could motivate you to read more about politics. And if it gets you to vote come November, then it’s worth the $15. For me, it whets my appetite for a more sophisticated and realistic simulation.