If you've played Skyrim, there's a very high chance that you've encountered the vicious Falmer – sightless, subterranean foes who live alongside Chaurus and make your adventures in Dwemer ruins an absolute nightmare. Delve a little into Skyrim's history, though, and you'll find out far more about the Falmer and their origins.

Their name will give you a clue – Falmer. The suffix '-mer' is also used by the Altmer, Bosmer, and Dunmer – all elves. Where the Altmer are High Elves, Bosmer are Wood Elves, and Dunmer are Dark Elves, the hated Falmer were once the proud Snow Elves.

The Origin Of Snow Elves 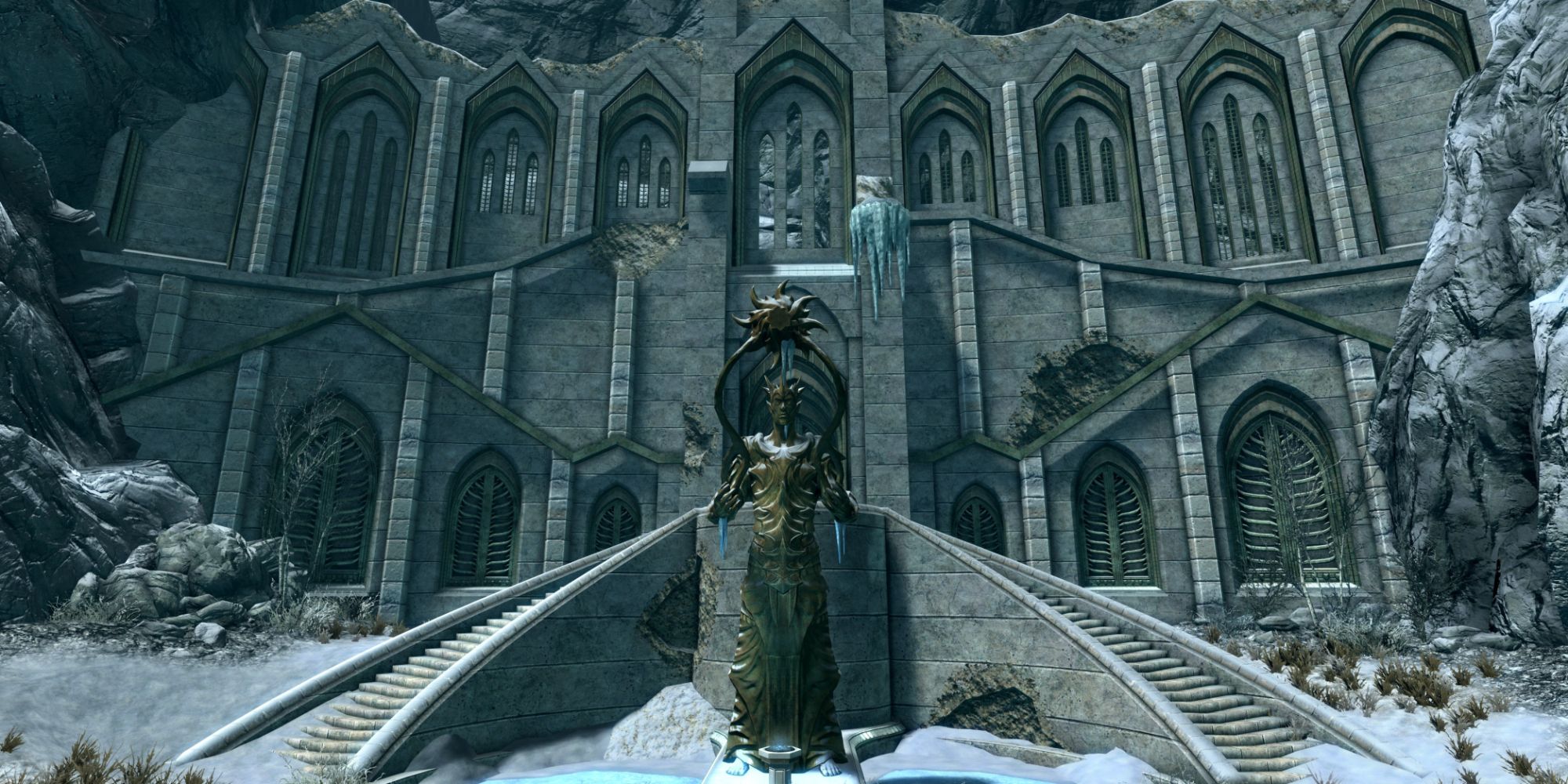 Elves, or mer, are the oldest denizens of Tamriel, with Men and Beasts coming later. The Falmer, or Snow Elves, were called such because they lived in the farthest reaches of the continent, in the snowy lands of Skyrim and the mountainous High Rock. Well-regarded for their magical aptitude, it's said that they created a grand civilization that rivaled even the Summerset Isles.

They were a deeply religious people, with the worship of Auri-El – the ancestor god in most elven pantheons – being very important. Making pilgrimage was a tenet of their belief, with journeys to the Chantry of Auri-El commonly made. The Chantry remains standing today in the Forgotten Vale, and is one of the only examples of Snow Elf architecture that we can examine ourselves in-game.

Are there Ice Elves? I have heard of these strange creatures but until recently, I dismissed the stories as myths. But now I am pretty sure I met one. – Ice Elves: Fact or Fiction?

So how did the Snow Elves become the foes we face in Skyrim? Well, as is often the case in that region, the Nords are to blame.

The Night Of Tears And The Fall Of The Snow Prince 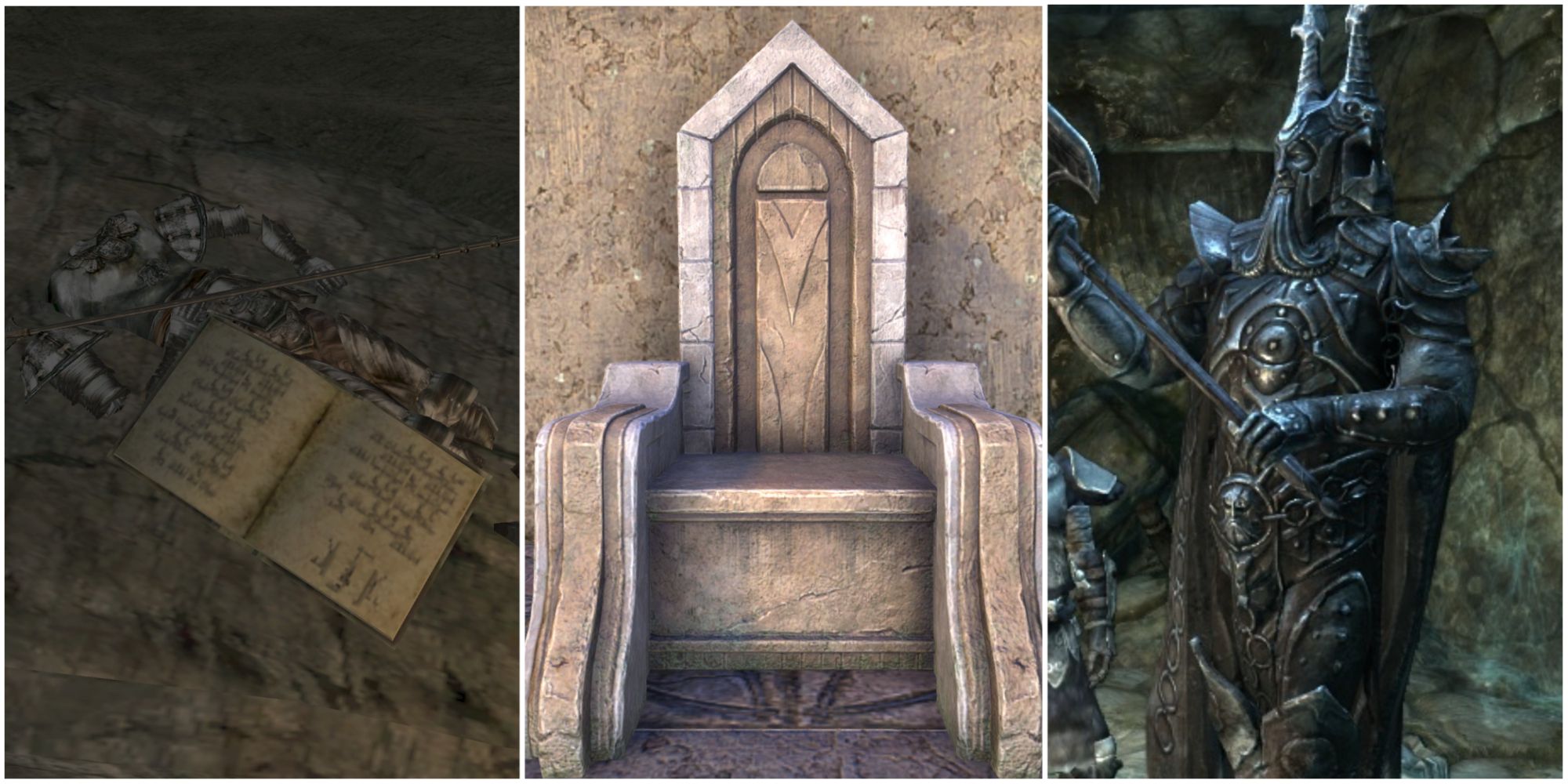 For many years, the Snow Elves found themselves in conflict with the Nords in Skyrim. While other regions of Tamriel had the elves enslaving men, Skyrim broke down into fully-fledged hostilities. It was one spark that brought things to the boiling point – an event that came to be known as the Night of Tears.

The Nords had managed to flourish in northern Skyrim, creating the grand city of Saarthal. Quite close to Winterhold and the location of an early Mage's Guild quest in Skyrim, Saarthal was a grand settlement built on top of the Eye of Magnus, an incredibly powerful artifact of great interest to men and mer alike.

The true motives behind the Night of Tears have been obscured to us by the passage of time, but I believe this was not a simple war of territory, or of control of Skyrim. I believe that what happened was a significant event based around something very particular. – Night of Tears, by Dranor Seleth

The Snow Elves attacked Saarthal and razed it to the ground. While it isn't known why they did this, the Eye of Magnus makes for a compelling scapegoat. Regardless, they committed this atrocity and left few survivors – notably, Ysgramor escaped the assault, and this would be the Snow Elves' undoing.

Ysgramor famously returned with a crusade, hell-bent on forcing the elves out of Skyrim. He did this rather successfully and even went on to pursue the mer to Solstheim, an island in the region of Morrowind. Here is where the Battle of the Moesring occurred – many warriors on both sides were slain, but it was a sword thrown in rage by a 12-year-old Nord girl that took the life of the Snow Prince, a figure of import that we know very little about but who likely held an important position of power in the Snow Elf hierarchy.

While he was buried with honor amongst his Nord enemies, the Snow Elves were left without a figurehead.

With the slaying of the Snow Prince, the Snow Elves had to concede. 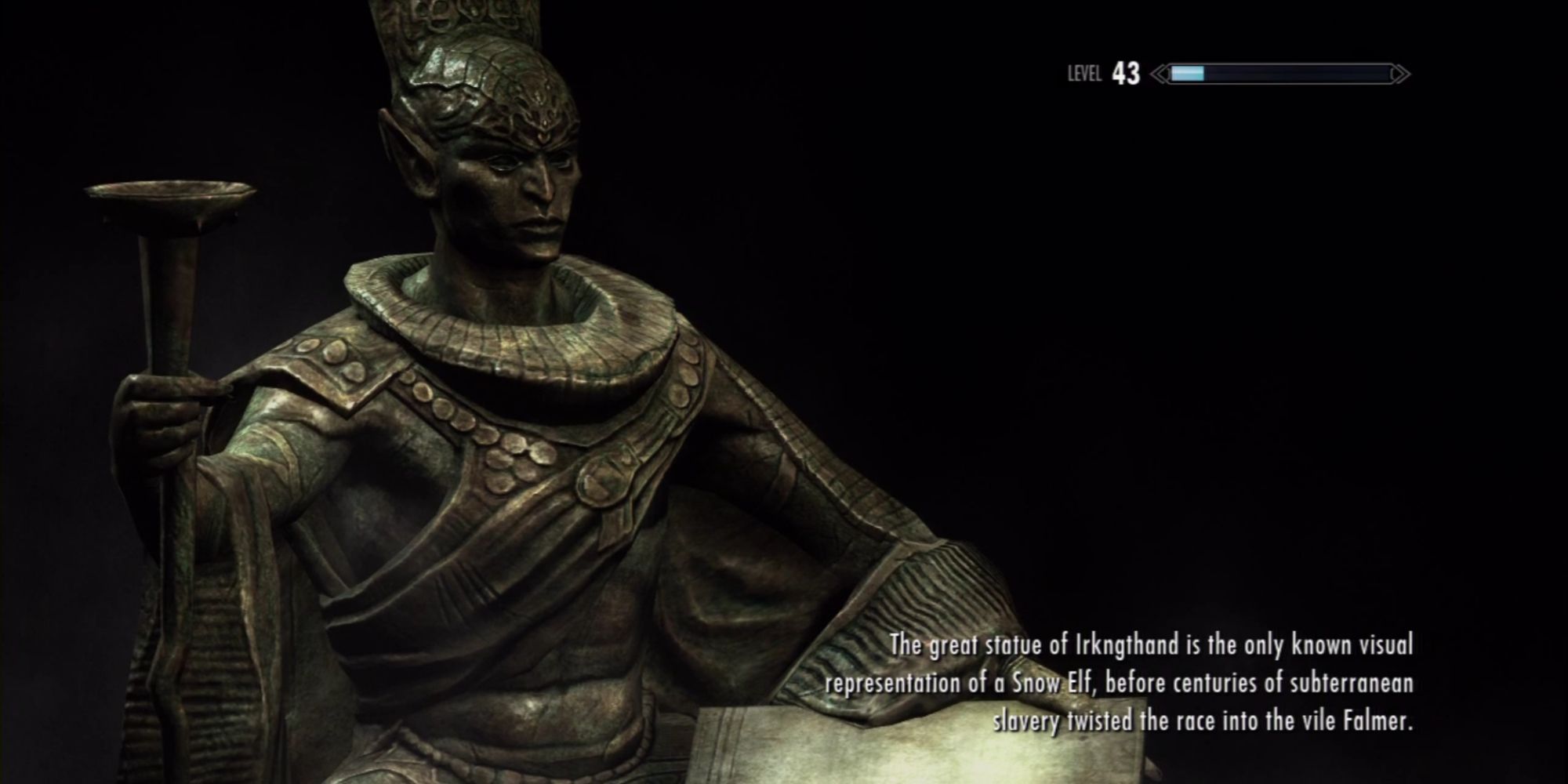 News has reached us that the great Snow Prince has fallen in battle. The urgency to go into hiding has left many of us scattered and those of us still together unsure of which direction to turn. In the long hours of night we keep huddled together always fearing the worst until the first light of the blessed sun. May Auri-El guide our footsteps. – Journal of Mirtil Angot

Terrified and with nowhere else to turn, the Snow Elves brokered a deal with the Dwemer, a subterranean race of elves with settlements sprawling across Skyrim, the place the Snow Elves' still considered home.

As if they hadn't had enough bad luck, this deal proved to be the Snow Elves' final undoing. In return for this necessary asylum, the Dwemer took advantage of the Snow Elves, forcing them into servitude. Worse still, the Dwemer, in their isolationist distrust of anything un-Dwemer, forced the Snow Elves to consume a toxic fungi that rendered them completely blind, and made it a vital, central part of their diets. The fungi proved so powerful and potent that the race would forevermore remain sightless.

It was during this time that some Falmer, in secret, sculpted a giant statue in their likeness within the Dwemer settlement of Irkngthand. Two giant gemstones, named the Eyes of the Falmer, were embedded into the statue, and became a legendary story for would-be plunderers and thieves.

But as is always the story with slaves and their masters, the Falmer eventually rebelled. Generations after they first sought solace among the dwarves, and experienced bitter betrayal, the Falmer rose up against their oppressors. They overthrew the dwarves, and fled even further down, into Blackreach's deepest, most hidden reaches. – The Falmer: A Study, by Ursa Uthrax

Over time, the Snow Elves adapted to their newfound plight, managing to build settlements of their own. They waged a bloody war against the Dwemer for many years, known as the War of the Crag. The war only ended when the entire Dwemer race suddenly vanished. Left without an enemy and a cause, the Falmer, now more resembling what we see in the video games, live in relative peace, making occasional raids to the surface and viciously attacking any non-Falmer who crosses their paths. 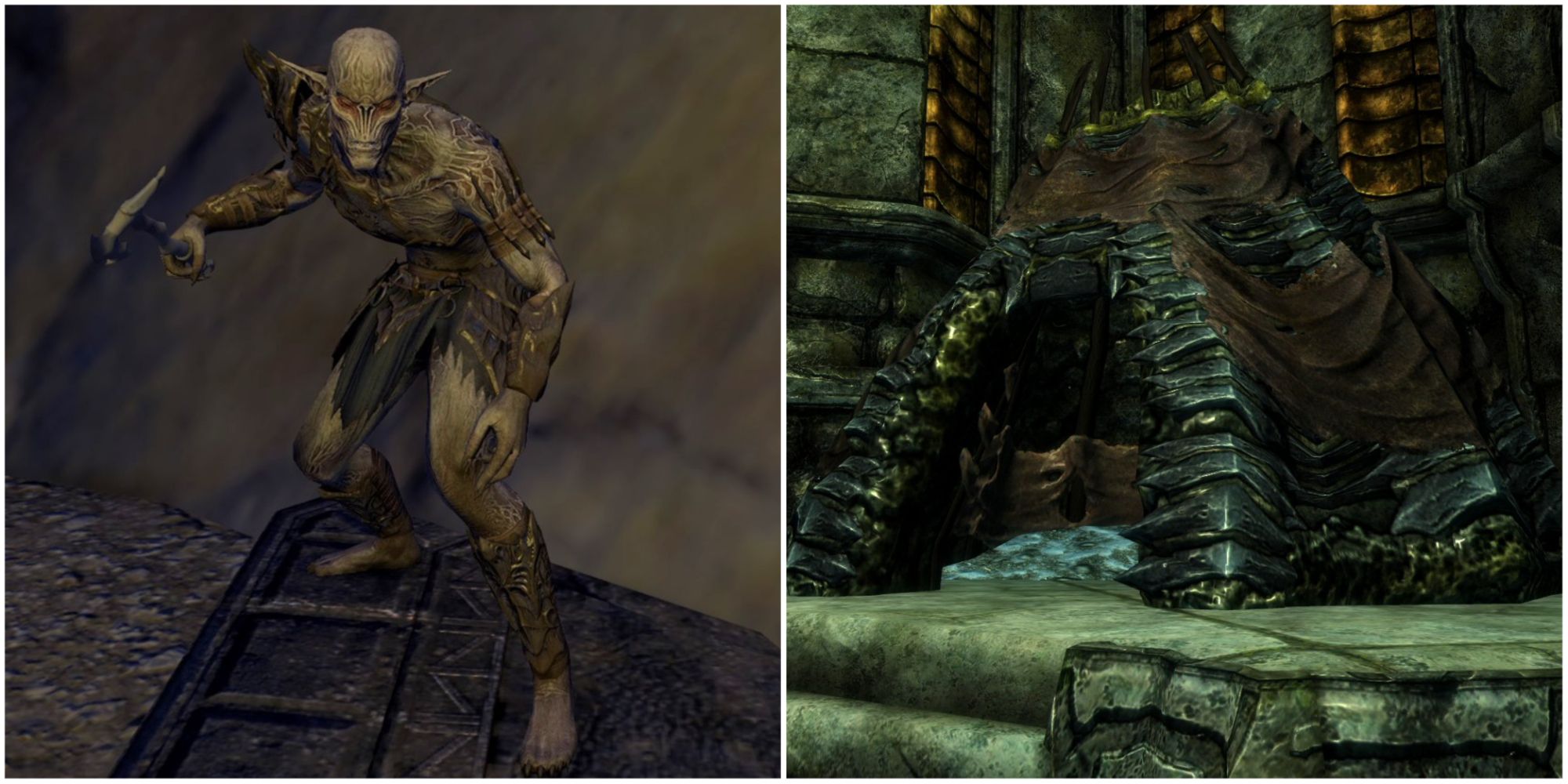 Finally free from the threat of their Dwemer overlords, the Falmer were able to spread freely throughout Blackreach. But years of fighting the dwarves had left them bloodthirsty and brutal. Feeling the need to conquer, to kill, they began mounting raids to the surface world. And so the legends began. Of small, blind, goblin-like creatures who would rise from the cracks of the earth, in the dead of night, to slaughter cattle, attack lonely travelers, and steal sleeping babes from their cribs. – The Falmer: A Study, by Ursa Uthrax

We know little of the Snow Elves as they appear in the games. They serve as interesting enemies whose blindness can be taken advantage of with spells and enchantments that muffle your steps, and ferocious opponents for those who do not, but their history is rarely encountered in quests and tomes. Much of what we learn is observational.

For example, they were able to domesticate chaurus, insectoid, huge creatures with chitinous armor and vicious poison. They used these beasts in combat, as well as for food and crafting chitin armor. Their settlements are not very robustly protected, usually only consisting of tents and short walls crafted out of basic materials and chaurus chitin.

Falmer also seem to have fantastic senses of hearing to compensate for their lack of sight. You'll encounter plenty of Falmer archers in their settlements, and their aim is as true as any other race. 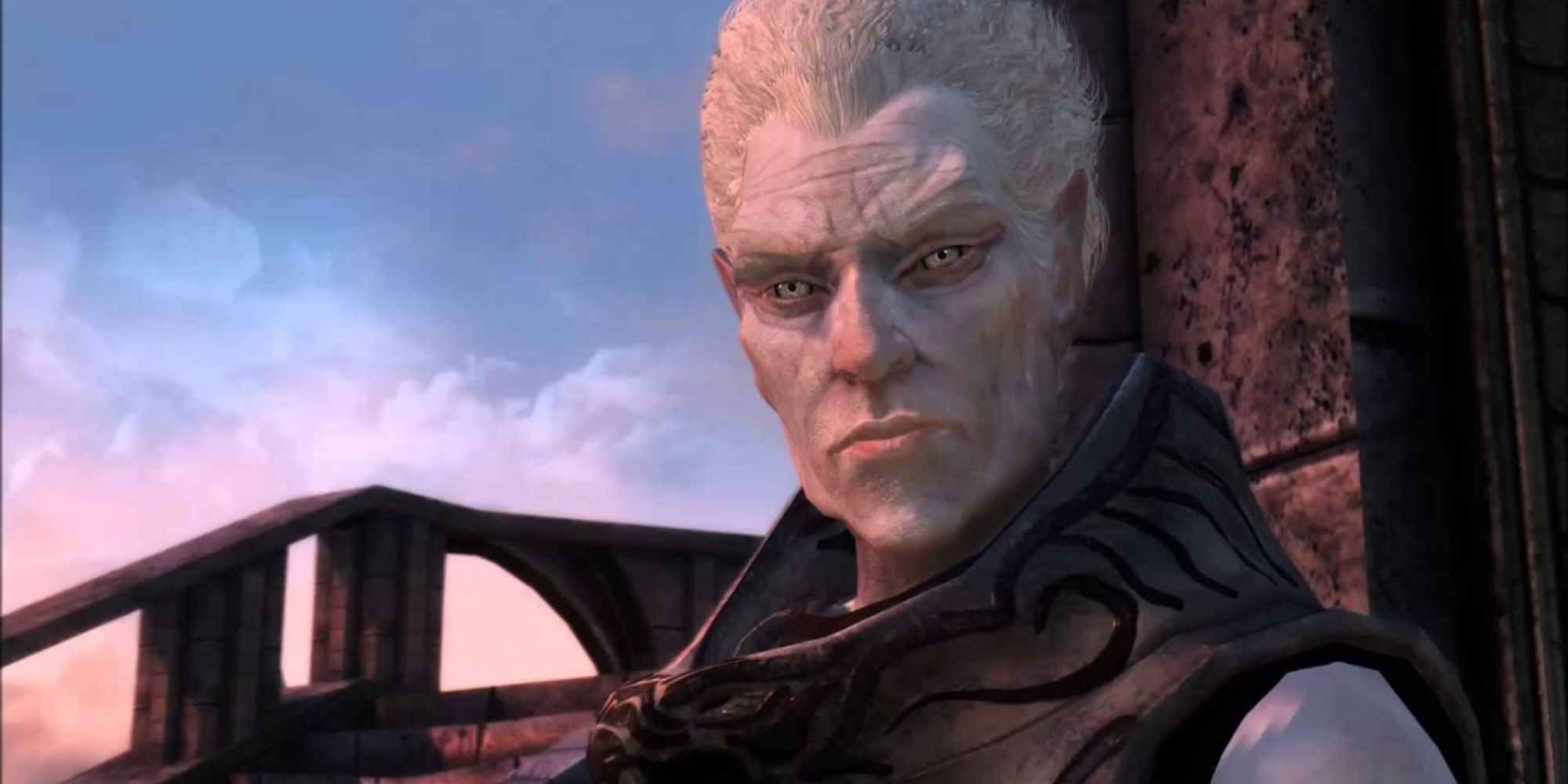 Of course, this is just concerning the Falmer who took the Dwemer's deal. Some Falmer did not. Specifically, there were Falmer residing in the Chantry of Auri-El who heard of the plan to seek asylum with the Dwemer too late, and thus did not succumb to the Dwemeri toxin. Two can be met in Skyrim's Dawnguard expansion – Knight-Paladin Gelebor and his brother, Vyrthur, a vampiric Snow Elf who you must put down.

It's also quite possible that there are some other isolated conclaves of snow elves nestled elsewhere on Nirn. – Gelebor, Dawnguard

It's notable that Gelebor draws a strict distinction between himself and his subterranean cousins. He refers to himself exclusively as a Snow Elf, but the descendants of the unlucky masses who took the Dwemeri deal, Betrayed. Calling the fallen Falmer the Betrayed seems a fitting epithet – what the Dwemer did to them seems an irreversible crime.

At the end of the day, though, the masses regard the Snow Elves as little more than a dot on the pages of history and the Falmer as a bedtime story to warn children against staying out too late. Much of what we know comes from first-hand accounts, the studies of academics like Calcelmo of Markarth, and books that we can read in-game. Whether or not their plight and their future will be explored more thoroughly in the future remains to be seen.