Are you the type of person who always wonders if they remembered to turn the lights off before they left home? Or do you like the idea of living in a house that is capable of doing a lot of things for you? Read on to find out if a smart home is right for you!

What is a Smart Home?

The idea of a house that does everything for you may sound like science fiction, but it’s already science fact. There are different types of smart homes, but the overall idea is the same: a house where many of the appliances/devices (lights, fridge, heating, etc.) can either be controlled remotely or communicate with each other.

Let’s say you’re on your way home from work. You might use an app on your phone to tell your oven, and all the lights downstairs, to switch on. Or perhaps you’re running late for a meeting, and in your rush, you forgot to lock the front door. So you load up a program on your mobile device and double-check the door’s locked. A Machine For Living In

Depending on what country you live in, you may already have some smart devices in your home. For example, in the United Kingdom and many parts of the United States, houses come with a thermostat, so the heating (or air conditioning) can be programmed to turn on or off at certain times (or if the temperature reaches a set level).

The next logical step is to have a thermostat that can be controlled from outside the home. What if you decide not to go straight home after work? With a standard thermostat, the heating’s going to kick in and turn your house into a furnace. If you have a smart device, you can tell it to turn the heating off right at that moment.

The way a smart home allows communication can be one of a few ways. One of the oldest methods is via an X10 device, which uses existing electrical wires to communicate between devices. The downside to this is that sometimes other things can cause interference, thereby disrupting the signal so it can’t reach the target object.

Contemporary technology that’s fast replacing x10 includes ZigBee and Z-Wave. Both use radio waves to talk to compatible devices, although Z-Wave uses proprietary technology that may harm its popularity in the future.

Of course, there’s always the choice to connect all relevant devices through wifi, but this leads to another concern: hacking. There have already been stories of people hacking into helper devices like Alexa, so the idea that someone might be able to access every security system in your home remotely is, of course, quite scary.

Thankfully such stories are rare and usually due to a lack of common sense. If you make sure your network’s suitably protected (not a public network; has a strong password), there shouldn’t be anything to worry about.

The Internet of Things

The idea of all devices being connected and communicating with each other is known as The Internet of Things (IoT). A term originated by technology expert Kevin Ashton in 1999. He suggested that developing a computer system for devices would make many things more comfortable, not to mention open up exciting areas of protection and safety.

So far, we’ve talked about relatively low-level concepts such as managing lighting and heating. However, imagine if you could set up a smart home so that your lighting system knows when the electricity bill has arrived, and then pays it for you. Or what about a motion detection system that knows if the elderly person in its vicinity has suffered a fall, and calls an ambulance.

These days, most people automatically think of The Internet of All Things as simply being a case of having everything connected to the Internet, which isn’t strictly accurate. In theory, you could live in a house completely independent of the world wide web and still live in a smart home. All you would need is an aforementioned network within the house to enable devices to talk with each other. 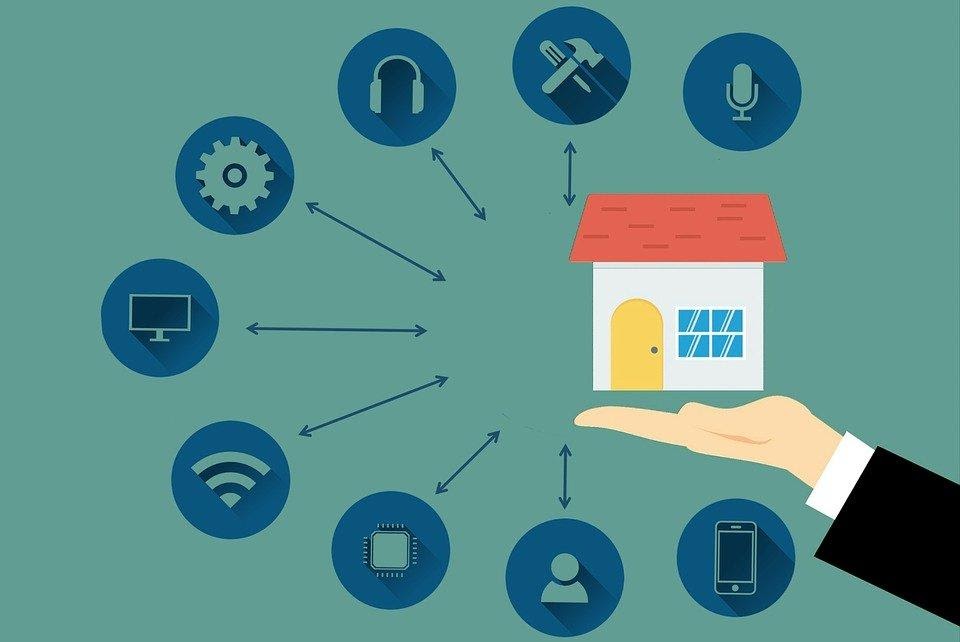 A related term that also occasionally gets bandied about in relation to the IoT is digital Darwinism. This is the idea that technology, such as artificial intelligence and machine learning, can be used to evolve itself at a potentially exponential rate.

The benefits of this could include highly intelligent smart home devices. For example, a security system that can read the heat signature of a person and take appropriate action if it doesn’t recognize them. Or perhaps a smart fridge that scans everything you put in it, so it knows what you like and can order it for you.

In truth, that latter one is almost possible now, so the idea of digital Darwinism clearly has some merit. Smart homes are already rather clever, so it’s only a matter of time before they become even more intelligent and interconnected.

Imagine living in a neighborhood where every home can ‘speak’ to each other, notify other houses if their sensors pick up intruders, or manage their own maintenance. This isn’t even a futuristic notion, either: smart home neighborhoods already exist in Seattle, Miami, and San Francisco. So far, they’re self-contained, but there are plans to connect them.

Maybe one day, new homes will come equipped with smart technology as standard so that we’ll all be living in mini versions of Bill Gates’ famous robot house. However, if you like the idea of turning your house into a smart home but you don’t have Bill Gates’ millions, there are a couple of routes you can go.

If you’re savvy enough, there’s the DIY way: install and set up your dedicated network of cameras, sensors, and so on. Alternatively, there are smart home kits available, ready to go straight out of the box just visit here.

Whichever route you choose (or don’t choose), it’s evident smart home technology will only continue to improve and evolve.