One of the best qualities of The Witcher 3 is its large selection of creatures. You can encounter dozens of enemies throughout the open world, and many monsters also take part in quests and contracts. Although there are lots of unique monsters that you've likely never seen in other video games, you may also encounter a Werewolf; a good old traditional monster that seems to creep its way into every fantasy universe.

Werewolves are a fun boss to fight, primarily because they're incredibly dangerous. As such, you may need a few tips and tricks for defeating this hairy foe. Here's everything you need to know about how to attack and defend against Werewolves. 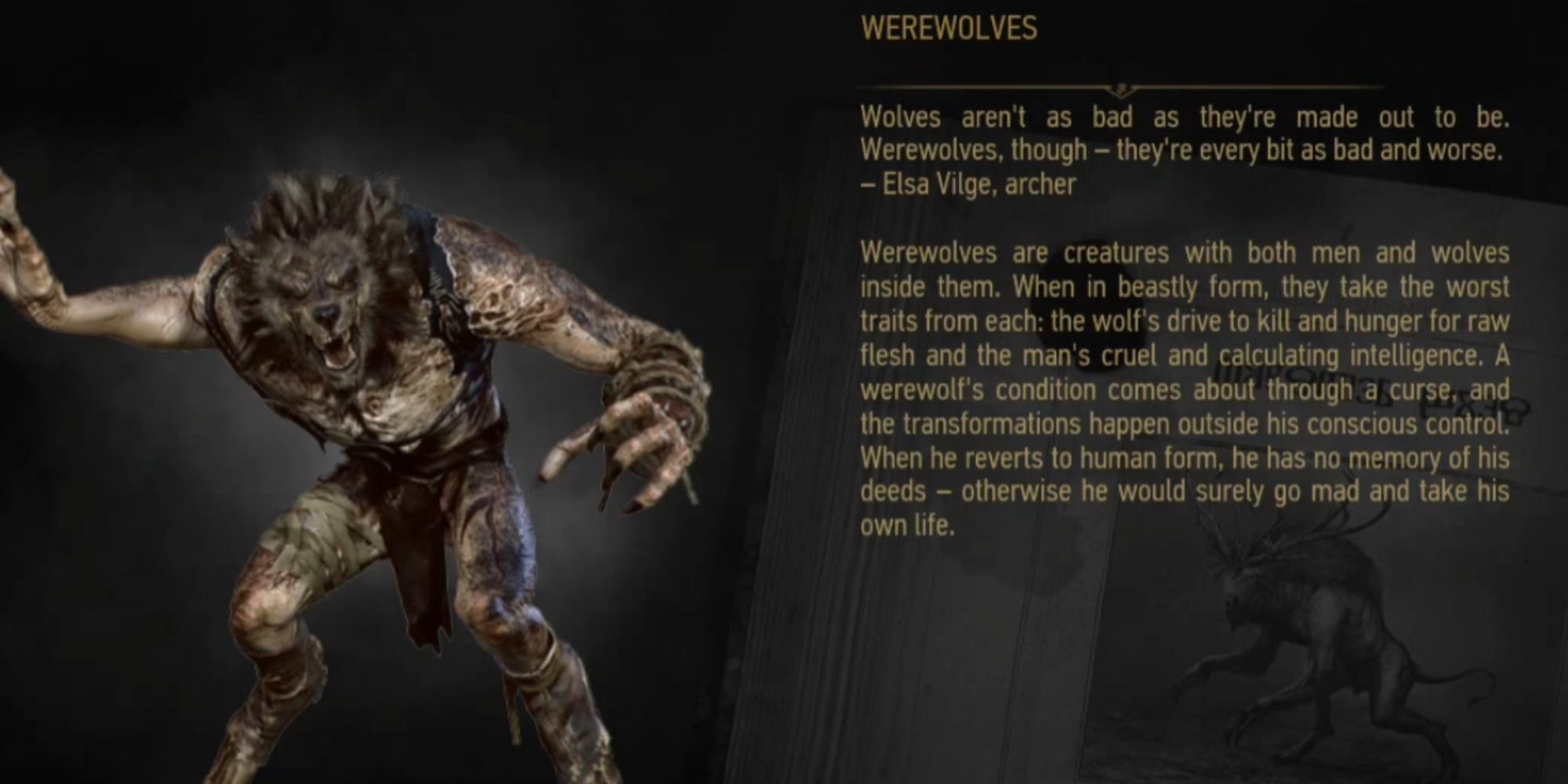 Werewolves are creatures that come about when a person gains the curse of lycanthropy. The cursed person can then transform into a wolf-like creature – often not at will, as is the burden of the curse – but it's much more powerful than a regular wolf. Werewolves in The Witcher 3 usually appear as boss enemies for quests, so they're meant to be every bit as powerful as they are scary.

How To Defeat Werewolves 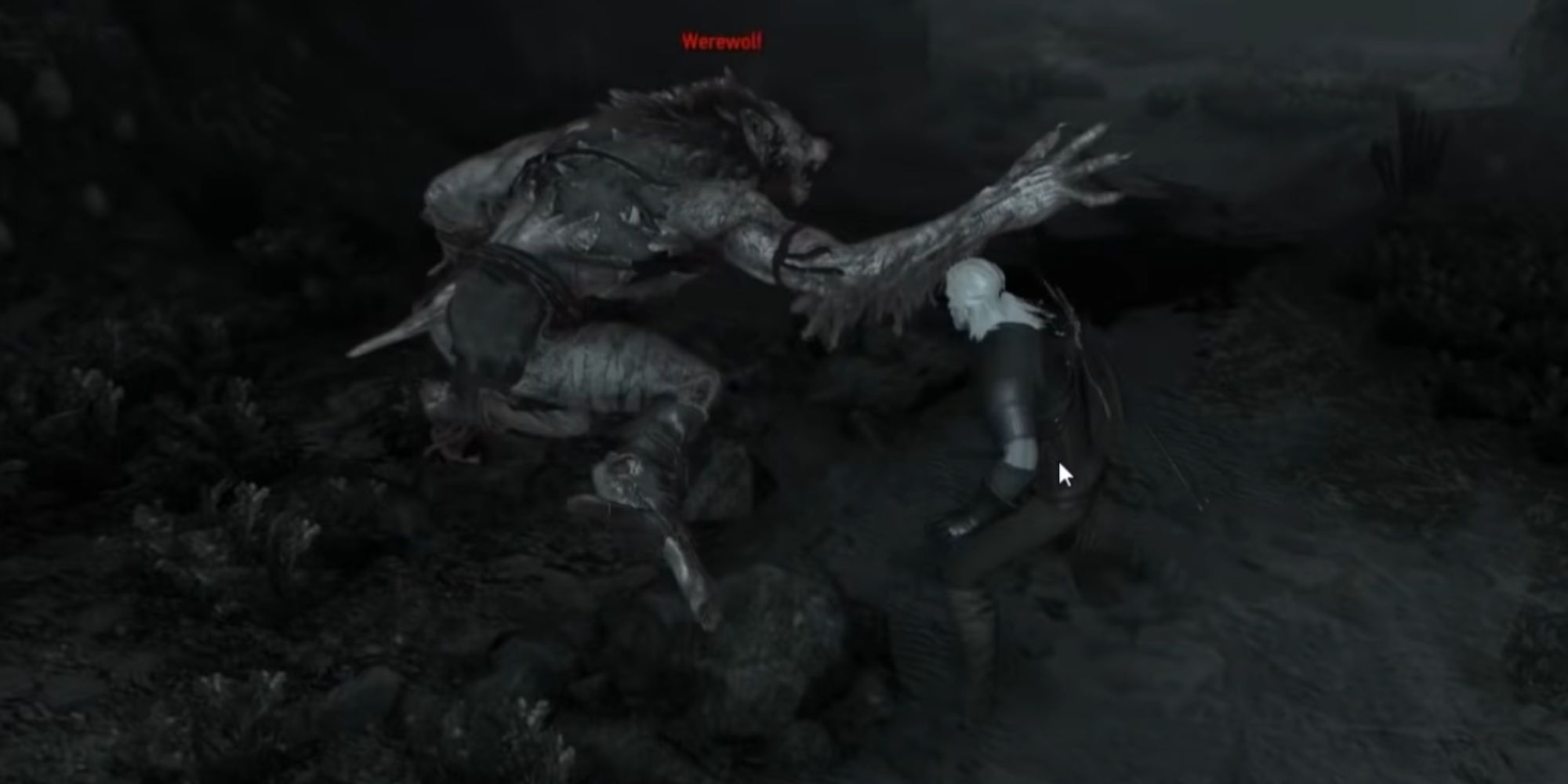 Defeating a Werewolf is a two-step task. Werewolves are equally as powerful as they are hardy, so you need to know how to damage them as well as defend against their attacks. There are also a few important things you need to keep in mind while fighting them, such as their health recovery. Here's a guide on how to defeat Werewolves in The Witcher 3.

Items You Need For A Werewolf Boss Fight

Two items are useful while fighting a Werewolf. The first is Dancing Star bombs since they deal fire damage and Werewolves are susceptible to fire attacks. You can find crafting recipes for each of the Dancing Star items below.

Cursed Oil is another useful item you can use to deal extra damage towards Werewolves. Coat a Silver Sword with Cursed Oil, and the Werewolf won't stand a chance. Here's every type of Cursed Oil and how to craft them.

How To Defend Against Werewolf Attacks

Unlike many other monsters in The Witcher 3, Werewolves have a relatively small moveset. Werewolves will primarily attack you with their claws, so melee attacks are what you can expect for the majority of the battle. Hitting the Werewolf with consecutive attacks helps to stop the Werewolf from hitting you back, but the Werewolf will still get hits in here and there.

The best way to avoid taking a lot of damage from a Werewolf is by dodging its attacks. Unfortunately, Werewolves are fast creatures, so they're one of the hardest enemies to dodge. Watch the Werewolf's movements carefully and back away a second early if you believe it's about to attack.

Other than a sturdy set of armor, the final thing you can use to defend against Werewolves is the Quen sign. Quen grants Geralt a damage shield that can partially absorb incoming attacks, so it's essential that you activate it before entering the battle. Continue to cast the Quen sign as needed during the fight, and you'll have significantly less trouble while battling a Werewolf. The Yrden sign can also help to make a Werewolf's attacks slower.

The final thing to note about Werewolves is that they can summon wolves, so prioritize defeating them when they spawn. If you don't prioritize the wolf minions, then you may be overwhelmed by all the enemies surrounding you.

How To Deal Damage To Werewolves

The main challenge you'll face while fighting a Werewolf is dealing enough damage to defeat it since they can regenerate health. However, you can mitigate their health regeneration by dealing bleeding, poison, or fire damage. Fire damage is the easiest to use, so focus on dealing fire damage with the Igni sign and Dancing Star bombs. Even though fire is best, poison and bleeding damage are also great ways to stop a Werewolf from healing itself, so if you have oils or runes for that, all the better!

Once the Werewolf is taking enough fire damage, you should start attacking it with a Silver Sword. Coat Cursed Oil onto the sword if you want to deal more damage per hit. Keep dodging the Werewolf's attacks and get hits in with your Silver Sword when possible. You may have to deal multiple doses of fire damage to keep the Werewolf from regenerating health throughout the fight.

Remember to defeat wolf minions if they appear; prioritize them over the Werewolf since they're easy to defeat and may cause you trouble if they're around for too long.

How To Defeat The Big Bad Wolf

The Big Bad Wolf is a unique boss you encounter in the Land Of A Thousand Fables within the Blood And Wine DLC. To defeat the Big Bad Wolf, you should use all of the tactics above as he's almost exactly like a regular Werewolf.

However, the Big Bad Wolf doesn't regenerate health, and he's susceptible to Beast Oil instead of Cursed Oil. Every crafting recipe for Beast Oil is in the following table.

Related posts:
01/04/2022 News Comments Off on The Witcher 3: How To Defeat Werewolves
Hot News
Best Music & Rhythm Games On Quest 2: Beat Saber & More
How AI will drive the hybrid work environment
File Size For Kirby And The Forgotten Land Reveals Its The Biggest Kirby Yet
Evil Genius 2: Guide To Side Stories
Skyrim Player Captures Real Arrow In The Knee Moment
Recent Posts