As you progress throughout V Rising, the bosses you encounter will grow stronger and stronger. Basic early game foes will start transitioning into potentially tricky fights with punishing abilities. Polora The Feywalker is good example of the stronger mid-game bosses you can expect to find, and you will hopefully have acquired some decent gear by this stage in the game — otherwise, she can prove very troublesome.

This guide will teach you where to find Polora The Feywalker, the best battle strategy for fighting her, and what rewards you can expect to earn should you achieve victory.

You can find Polora The Feywalker in the Gleaming Meadows, in the extreme North-West corner of Farbane Woods. She will randomly roam around the Meadow but won't ever leave, so tracking her with a Blood Altar is not required.

The Meadow is one of the best places in the game to gather flowers such as Blood Rose and Fire Blossom, and can be farmed to your heart's content in order to gather Seeds for your castle garden.

There are not really any patrolling enemies in the Meadows, so you will not have to fight your way through to Polora either. 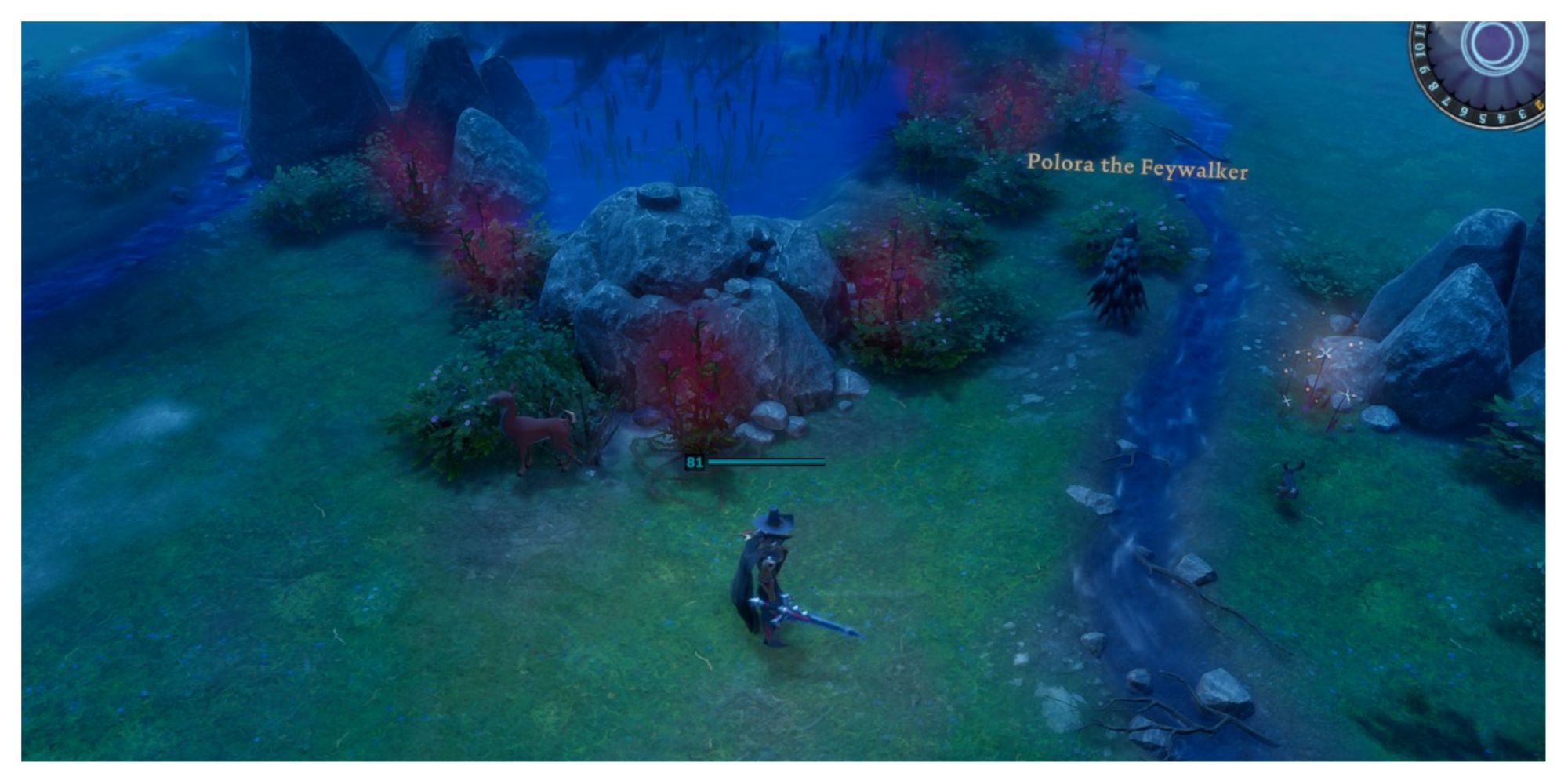 Polora The Feywalker has four primary abilities. Her first is a Wisp Cone attack that sends three wisp projectiles spreading outwards from her current location. She will use this extremely frequently throughout the fight, and if you are caught by all three wisps it can deal hefty damage. Circling around to the sides or back of Polora will help you deal with this move, although it can be tricky as she tends to run around a lot. She will frequently turn invisible for a couple of seconds and run away from you, but you can still see her silhouette and follow her for when she reappears.

Polora's next move is a stronger frontal projectile in the form of a Spectral Wolf. This will inflict a high amount of damage should you be hit by it, and it can also bounce off any wall to come charging towards you. Again the same strategy applies, circling around Polora will nullify the risk of you being struck.

While circling is very effective against most bosses in V Rising, Polora can complicate this movement via her next ability; an AoE fear. This will cause you to lose control of your character for a few seconds and run away from Polora. There is no real way to counter this spell, and you will often take damage due to its effects. Have some Vermin Salves on hand to help heal up and hope she does not cast Spectral Wolf directly afterwards.

Polora's fourth ability is to summon two small pixie minions to aid her. These will continuously shoot projectiles at you, dealing a small amount of damage. They do not have much health and are fairly easy to take down, so it is recommended to kill them off throughout the fight. Leaving them up can mess up your positioning and cause you to take needless damage. Polora can be a long fight so stay patient and keep clearing the pixies.

For gear, Polora is a combat level 34 boss, and a combat level of 30 should be sufficient to beat her. Merciless Nightstalker armour and a Merciless Copper weapon will be good enough equipment, and for spells prioritise single target damage in the form of Shadowbolt and Chaos Volley. 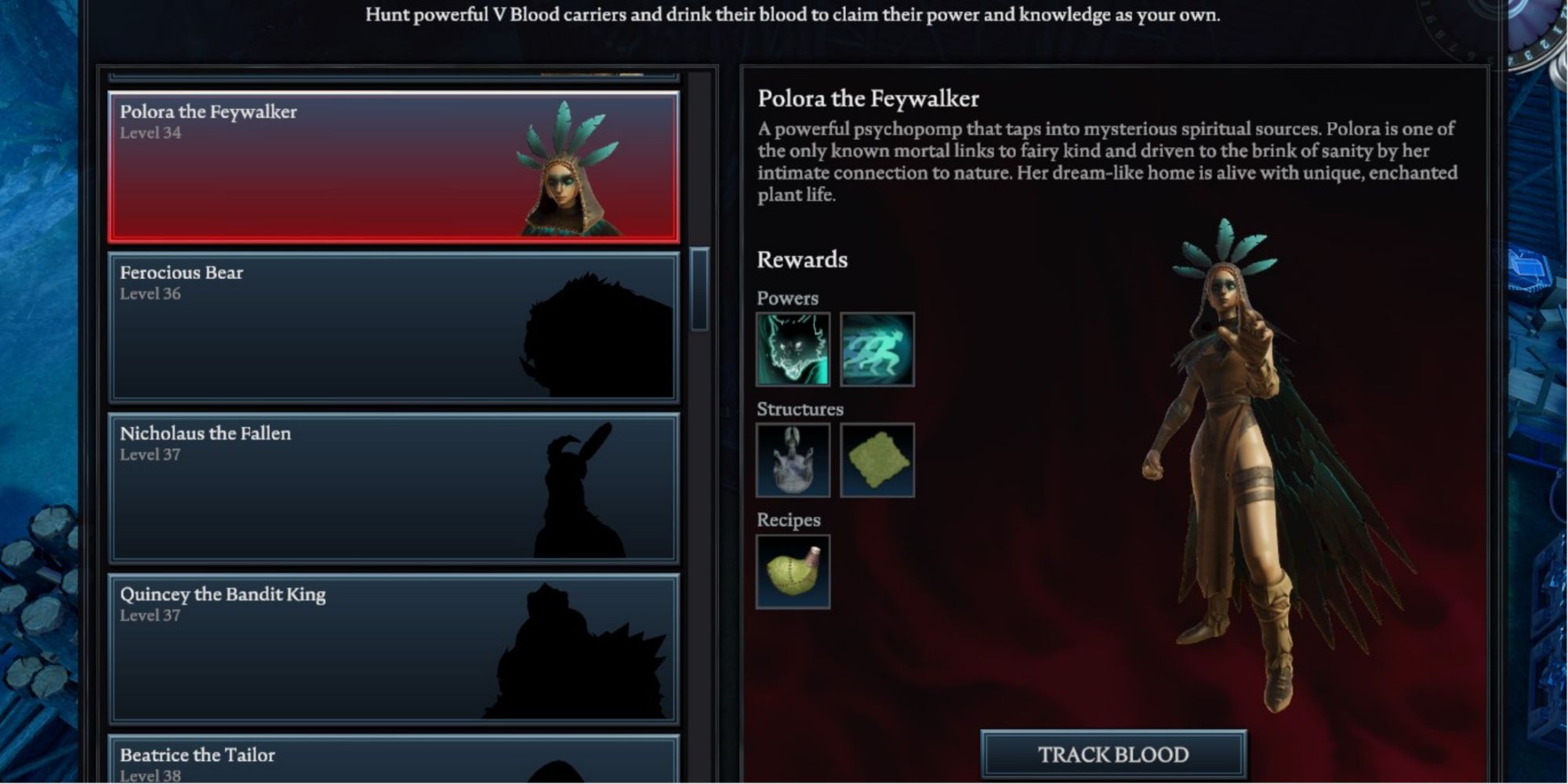 Polora The Feywalker grants you a good variety of rewards for defeating her. The first is the Spectral Wolf Vampire Power, a frontal projectile that deals damage and weakens the target's damage output for a few seconds, before bouncing to two nearby enemies. An interesting spell, Spectral Wolf has more uses in PvP, where the damage reduction can be very useful in a duel, but the low damage makes other choices more appealing for PvE content.

Polara will also give you the Veil of Illusion Travel Ability, a strong choice if you feel like switching off Veil of Chaos. This spell will empower your next primary attack to deal extra damage, and spawn an illusion from your starting location that will throw projectiles for minor damage. This ability can be recast within a few seconds to return to your start location and spawn another Illusion. This is a fantastic Travel option both in terms of damage output and mobility, and is highly recommended over any you have previously unlocked. The free damage from your Illusions is very strong, and being able to teleport back to your previous location can be essential in dodging multiple projectiles.

For your castle, Polora will reward you with the Vampire Waygate structure, as well as Garden Floors. The Waygate is a great addition to any castle and can allow you to teleport around the map provided you are not carrying any resources. The Garden Floors are also extremely useful, as they will allow you to grow various plants in your garden. Combined with the seeds you can farm from the Gleaming Meadows, a trip to Polora can yield enough resources for a large garden and a good supply of flowers for the rest of the game.

She will also grant you the ability to craft Minor Garlic Resistance Brews at your Alchemy Table, which can come in useful as you progress from beyond Farbane Woods.