While the majority of V Rising bosses are found in appropriately leveled zones, some enemies prefer to wander around large areas and are dangerous for newer vampires. If you encounter Tristan The Vampire Hunter early on in your adventures, he will prove to be an extremely challenging foe that should be avoided until you have sufficiently grown in strength.

This guide will teach you where to find Tristan The Vampire Hunter, how to beat him in battle, and what rewards you will gain if you are successful. 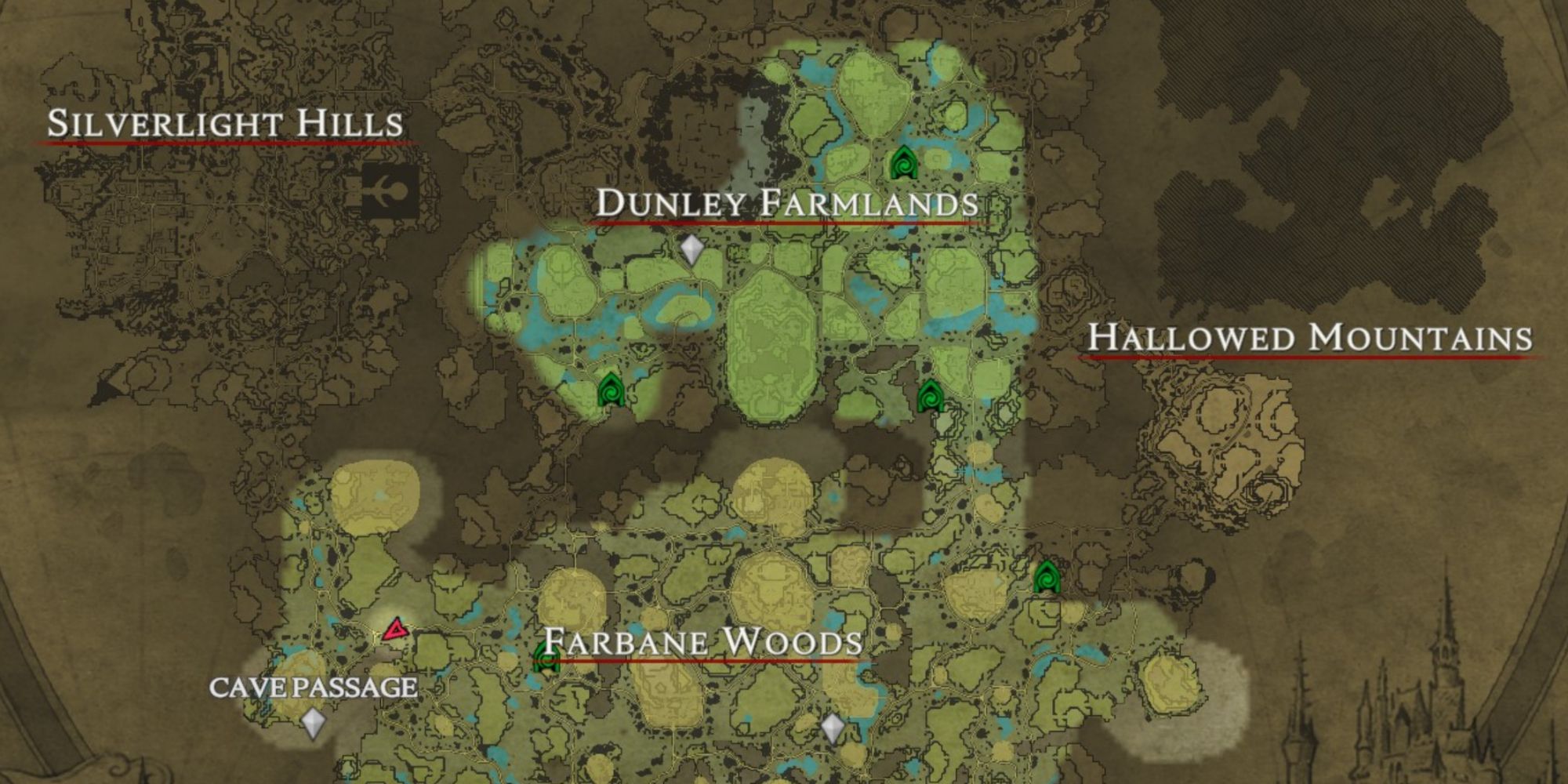 Tristan The Vampire Hunter is one of the most difficult bosses to track down, as he has an extremely large roaming area, encompassing nearly all of Farbane Woods and the Dunley Farmlands. He can typically be found nearby the Eastern border of Farbane and Dunley, but could be as far West as the Bandit Sulphur Quarry.

It is highly recommended to use your Blood Altar in order to locate him, although on a high population server his position may change frequently due to being repeatedly killed. Tristan is a roaming boss, and luring him away from the main road is advised, in order to avoid any incoming enemy patrols and give yourself some room to fight. He will not spawn any additional enemies, so you will only need to clear out the immediate area in which you choose to do battle.

A good strategy can be to lure Tristan into a powerful monster such as a Treant or Stone Golem. Tristan will engage this enemy, and you will be able to remove a portion of his health for free. 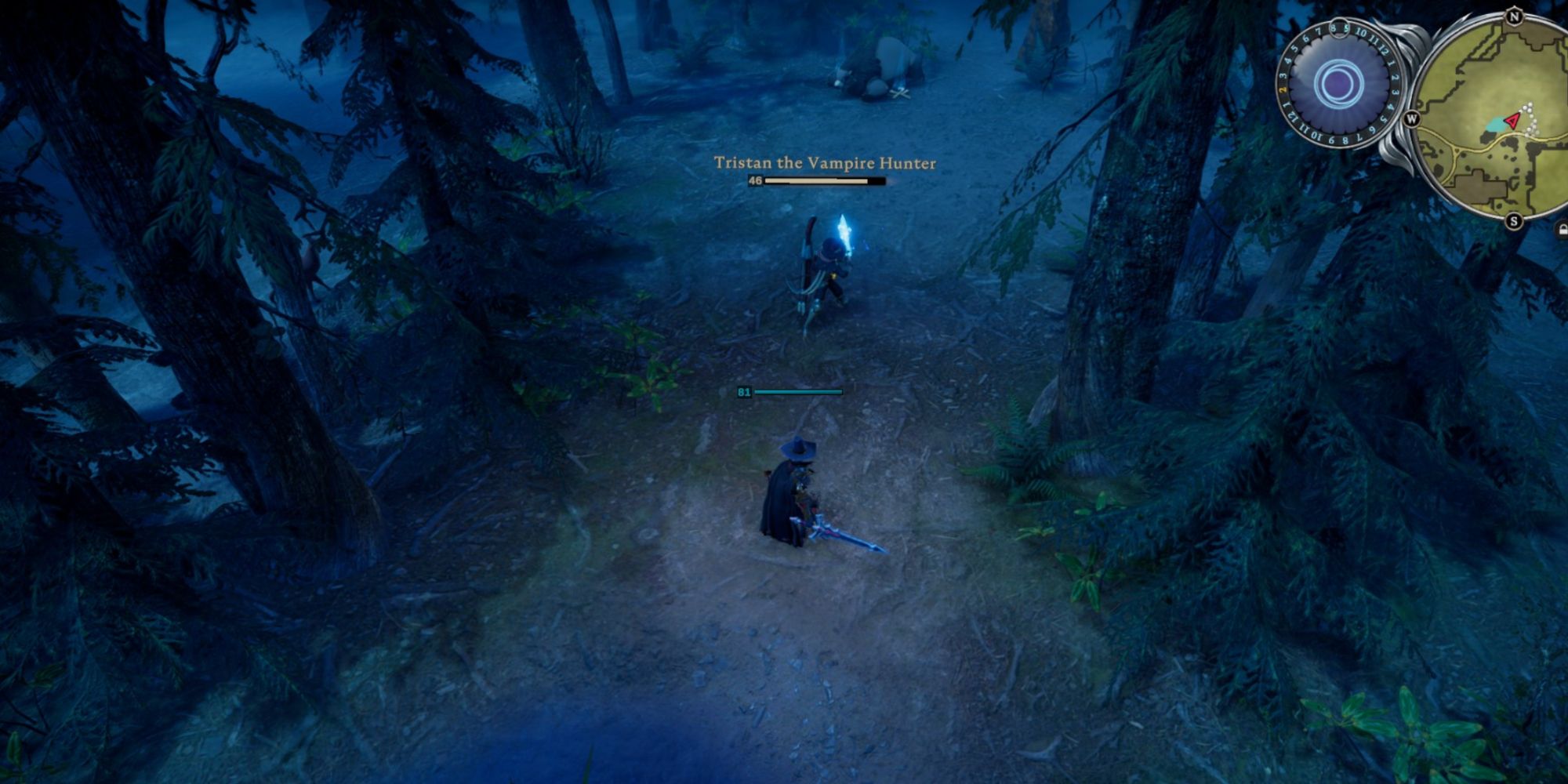 Tristan The Vampire Hunter is a combat level 46 boss, which can be considered a medium difficulty opponent. He does not have many abilities, but they all hit fairly hard, so you will need to be vigilant. His first attack is a jumping frontal thrust that comes out extremely quickly and can be difficult to dodge. Retreating backwards from Tristan and kiting with ranged attacks is the safest option to deal with this attack, as engaging him with melee moves is generally considered quite risky. Tristan will also empower his sword with Frost, performing a frontal arc slash, and slowing you should you be hit. However, this move has a long wind-up, and you should be easily dodging it with your Travel Ability.

Tristan has a couple of ranged attacks, the first being a charged frontal Fire Arrow from his Crossbow. This will set you ablaze for a few seconds, dealing light damage, and has a long cast animation, so can be easily sidestepped. His strongest move is to throw an Explosive Bomb into the air, which will split into around five extra bombs, before detonating all over the floor in a random pattern. These will leave Fire Pools on the ground for a lengthy duration and can clutter your arena, forcing you to keep on the move.

For your gear, try using an Iron Weapon, preferably the Crossbow or Axes, as they will give you some ranged damage abilities. For spells, Shadowbolt and Chaos Volley are good choices for a single target focus, although a Shield spell such as Ward of the Damned could be useful if you think you won't be able to consistently dodge. Hollowfang Battlegear is decent enough armour, but you will really want to prioritise avoiding any damage, so the fight can be done with some less advanced armour if necessary. A Fire Resistance Brew can be useful to mitigate some of the Fire damage you may receive, but it is not necessary. For Blood Type, try obtaining some Scholar to empower your spells, as they will be your main source of damage during this encounter. 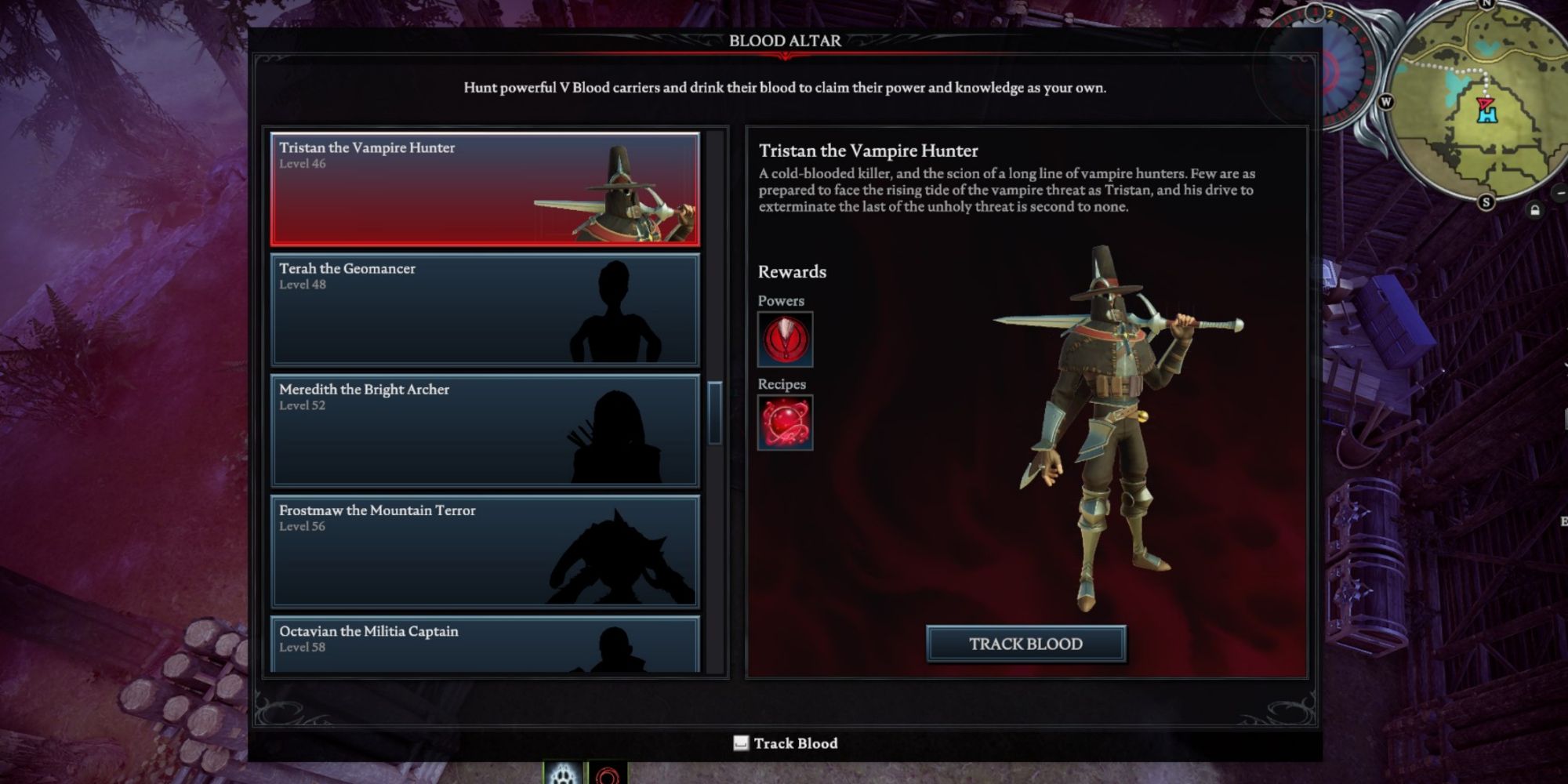 Tristan only provides two rewards upon draining him of his V Blood, but both of them can prove very useful. The first is the Blood Hunger Vampire Power, that will allow you to recognise and categorise the Blood Type and Blood Quality of nearby units. While not super impactful, it can be nice to find some good quality Blood before taking on a dangerous boss, or to learn what kind of Blood different creatures possess without draining them.

Due to certain accessories such as Rings needing Greater Blood Essence during their creation, Tristan can be considered a mandatory boss, albeit he can be killed at the time of your choosing, as these rewards are not super useful until specific points in the game.

Related posts:
07/30/2022 News Comments Off on V Rising: How To Find And Defeat Tristan The Vampire Hunter
Hot News
Roblox: How To Get And Use The Lemonade Stand In Adopt Me!
The Inner World: 7 Beginner’s Tips
how long for bactrim rash to go away
singulair tablet 5mg
SpongeBob Squarepants: The Cosmic Shake Gameplay Revealed, Launches January 24
Recent Posts