I just started playing Vampire Survivors this week, and the first thing that stuck out to me was how stark the game is. The first level is all flat, and minimally detailed, green grass tiles scrolling in every direction, interrupted by the occasional brown path and white pillar. Four archetypal heroes who, per the developer, are fresh out of a vampire-themed asset pack. And more ghouls and ghosts straight from central Castlevania casting than you could shake a stake at. This fits the minimalist gameplay, which allows you to actively control nothing except which direction you move.

The second thing that stuck out was how flashy the game is in other ways. After less than a minute of play, I collected enough blue gems to upgrade my character, an action that was accompanied by a loud, celebratory chime and a downpour of gems from the top of the screen. Whenever you get your hands on treasure, the game's pixel art goes into orgiastic overdrive, with a kamehameha of flashing lights bursting out of the chest for so long you might stop feeling excited and start checking your phone. For seemingly trivial accomplishments, the game pays out like a slot machine (which is fitting given that, earlier in his career, solo dev Luca Galante worked on casino games).

The third thing that stuck out to me was how tricky these monsters can be when they want to be. The game has a seemingly endless supply of enemies to throw at you and it does so in the meanest possible combinations. Given that the only action you control in this game is your movement, Vampire Survivors primarily challenges you to dodge fast and large squadrons of enemies. Early on, huge groups of bats start swooping across the screen and will mess you up if you get caught in their path. 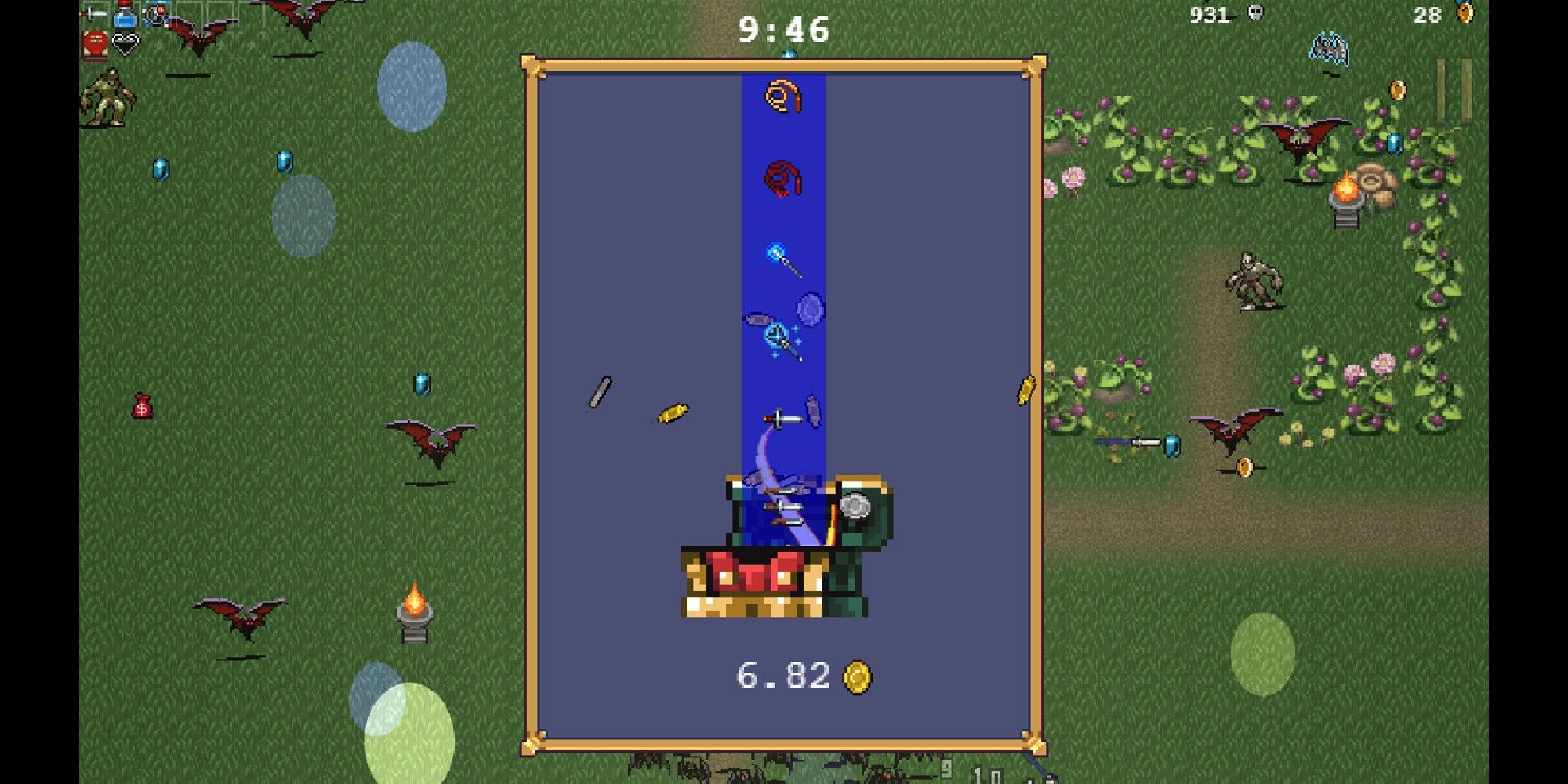 But the monster that really caught me off guard is the piranha plant-like flowers that array themselves in surprise rings of terror. At certain points in the game — I don’t know if it’s triggered by leveling up or something else — a chain of villainous flytraps will encircle your character and slowly close in on you. This wouldn’t be so bad if the piranha plants were all you had to deal with, but there are plenty of ghouls you still need to battle inside the ring, too. These flowers each take several hits to kill, too, so you can’t easily escape. If you try to walk through them, you may survive, but they'll chew through a significant portion of your health. In the early game, this has been the toughest challenge I’ve had to deal with.

But, if ten minutes into a run still counts as the early game — and, at the moment, it definitely doesn’t feel like it — the skeleton horde that crashed on me like a tsunami, instantly ending my run this morning is the real toughest challenge. Like the piranha plants, this skeletal horde completely encircled me. To my novice eyes, it seemed like there was no way out in any direction. To quote an extremely powerful witch whose skill set would be a great fit for Vampire Survivors’ ghoul-slaughtering action, that doesn’t seem fair.

At this point, I assume that this will be the defining feature of my time with Vampire Survivors: seeing an impossible obstacle and then finding out it isn’t impossible. That isn't a bad arc for a game. But, for now, those piranha plants are my sworn enemy and I am praying for their downfall.