There are a lot of things that could be considered “hot” in the universe. There’s fire, the sun, those weird things you put on your joints to make them feel better. Nothing compares to the flaming zeal that burns brightly at the core of Warhammer 40,000: Chaos Gate – Daemonhunters’ Purifier, however.

Fuelled by an insatiable desire to burn the heretic, mutant, and daemon, the Purifier is an unstoppable ranged threat brandishing the thrice-blessed Incinerator and dousing holy promethium onto everything that moves. If it looks funny, then the Purifier will reduce it to ash. Simple as that.

What Is A Purifier 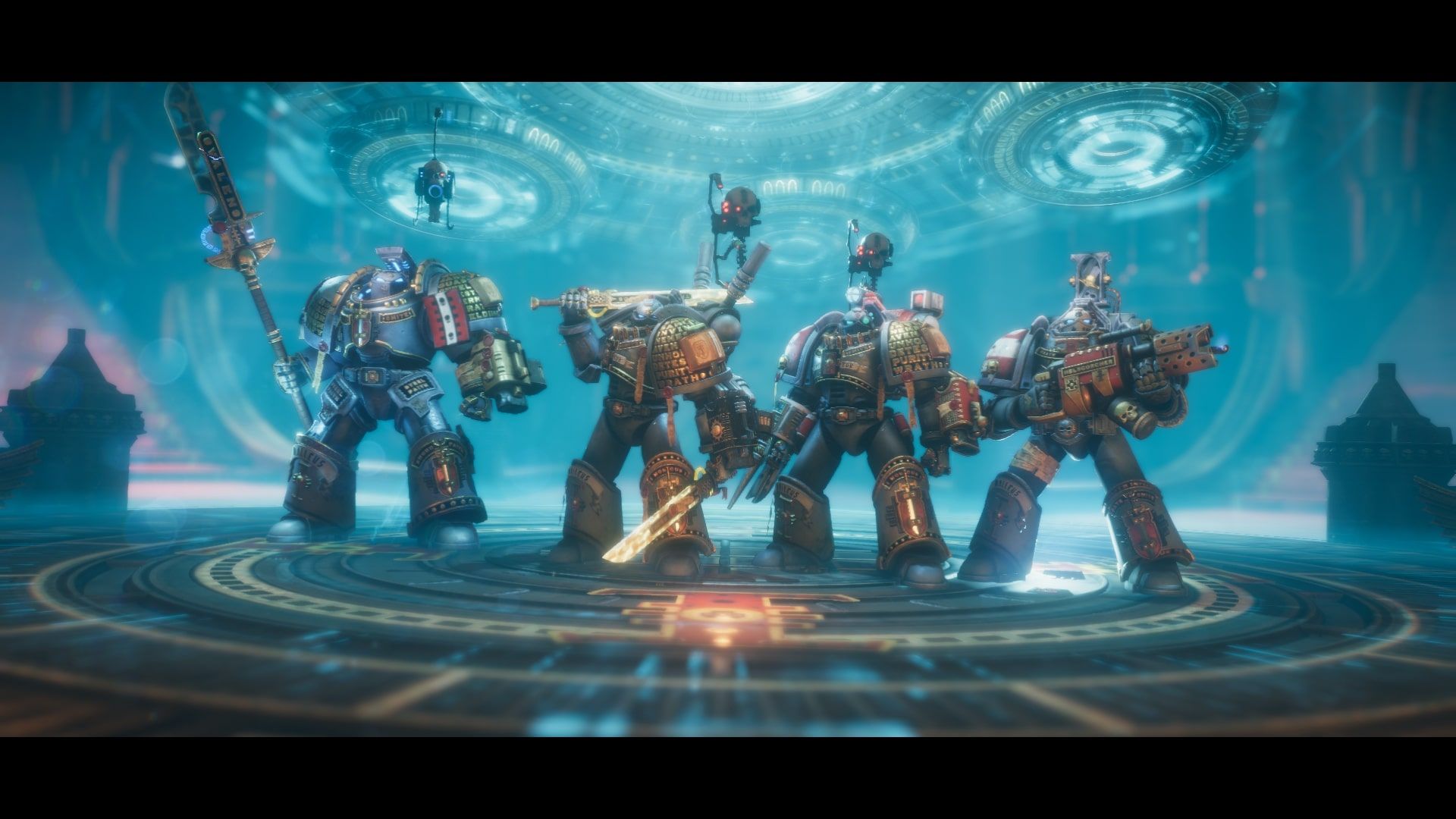 Purifiers are an Advanced Class in Chaos Gate that takes the Purgator and makes them extra crispy. Their entire MO revolves around burning – and they are exceptional at doing just that. They are capable melee fighters if you want to be a bit funky, but they excel at standing at mid-range and melting flesh, bone, and warp spawn in an endless fountain of death. 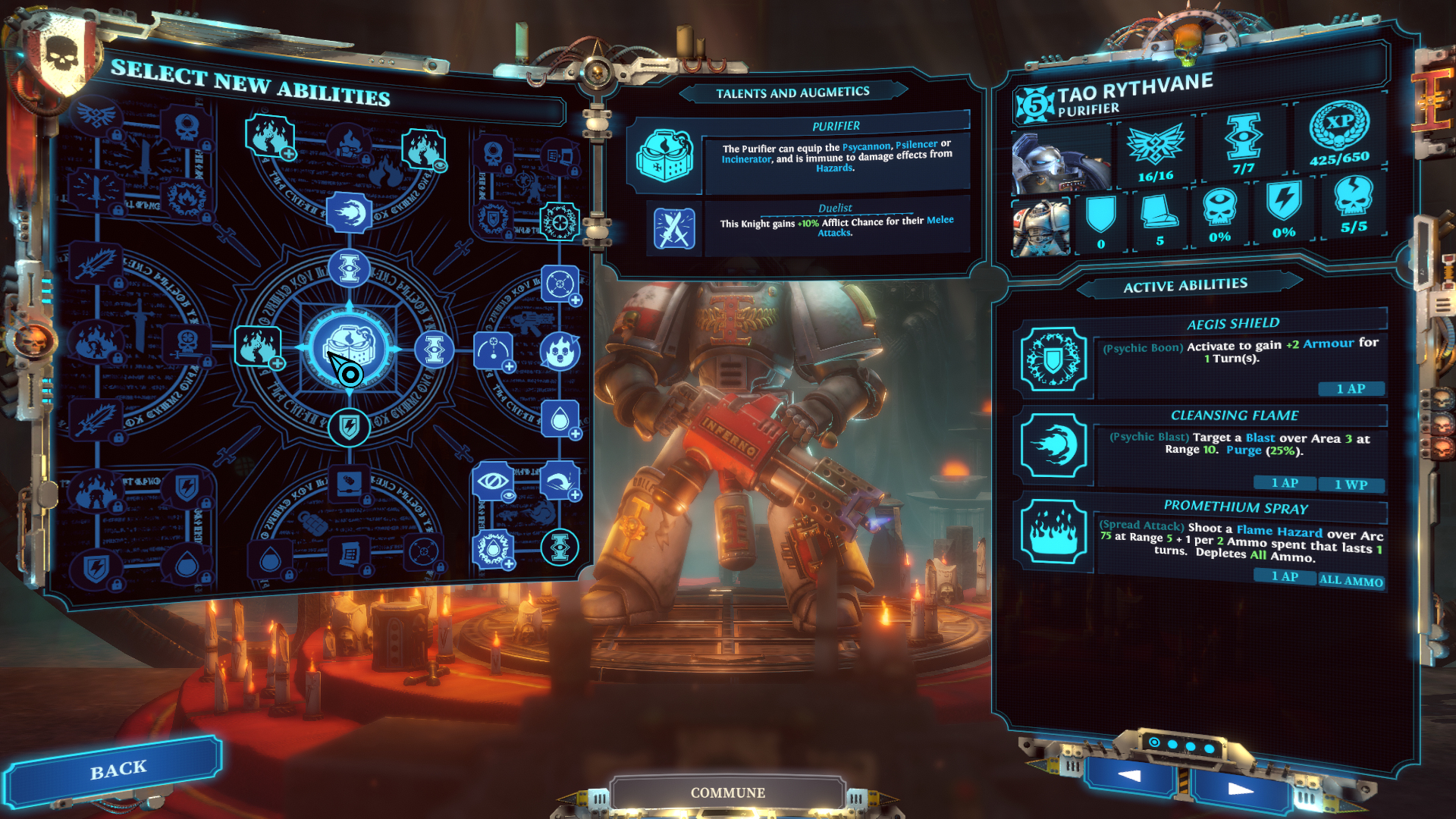 Purifiers are heavy weapon specialists who love to get into the thick of it. They carry the biggest guns and can wade through death itself to get stuck in. Like all classes, they come with an innate passive ability that helps them stand out – even at level one.

This tree is the basic tree that contains fairly straightforward skills. They lead to more specialized trees, however.

This tree unlocks and upgrades the Cleansing Flame Psychic Attack.

This tree focuses on upgrading the efficacy of the Incinerator line of weapons.

This tree focuses on improving the Purifier’s Grenades.

This tree upgrades the effectiveness of any Melee Attacks performed by the Purifier.

This tree unlocks and upgrades the Hammerhand Psychic Attack.

This tree unlocks and upgrades the Astral Aim Psychic Attack.

This tree focuses on the Flame Of Purity ability which is a skill that automatically comes with Incinerators and can be activated whenever the Purifier attacks normally.

This tree unlocks and upgrades the Unstoppable Conflagration Auto Ability. 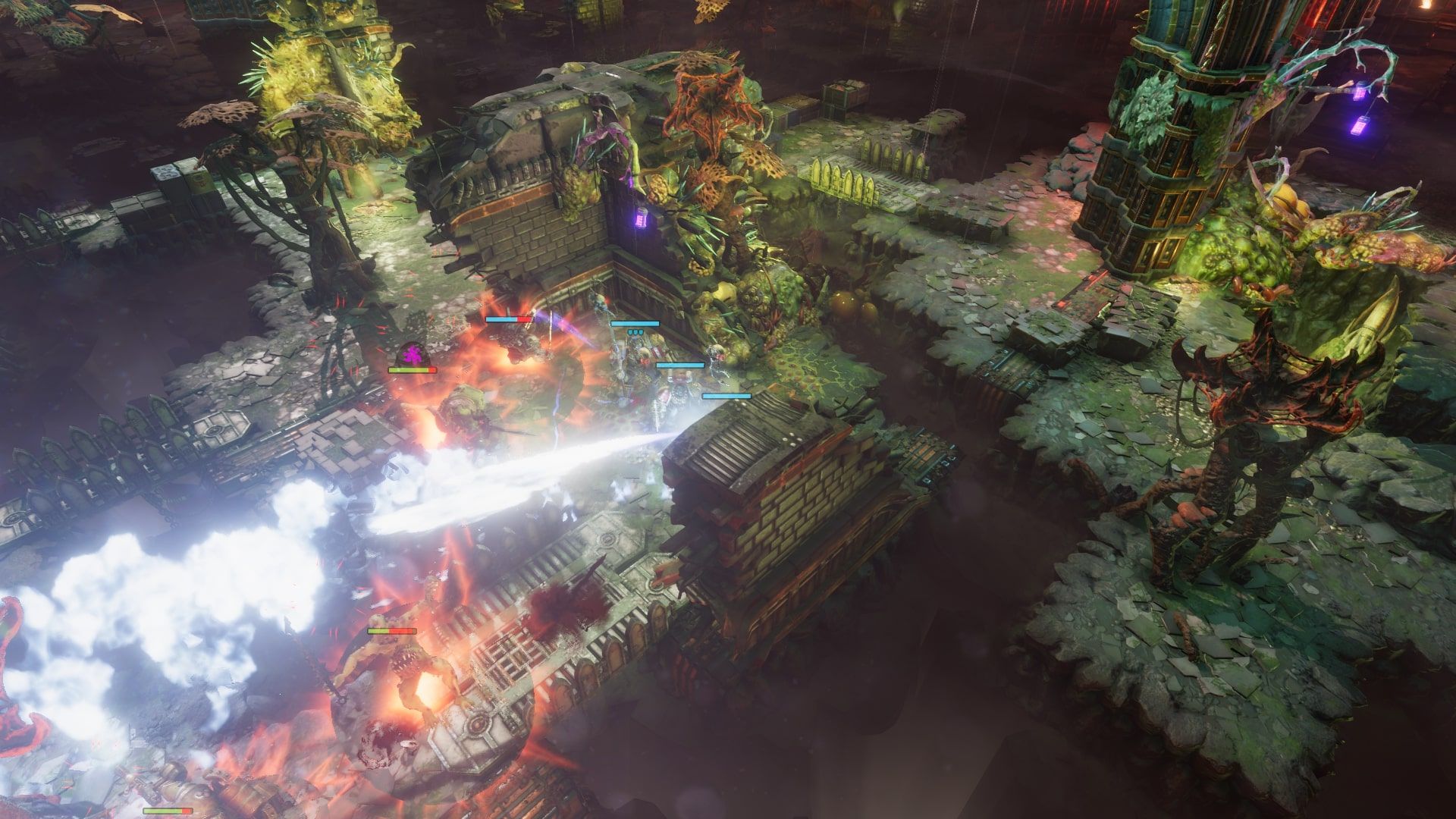 The Purifier is an awkward character to use as his abilities are very much split in several directions. Even when built to the best of your ability, the Purifier is incredibly situational and somewhat reliant on luck and weapons.

The Purifier’s available skills are split between Melee and Ranged, and of the two, Ranged is the way to go. The Purifier simply doesn’t have enough going on in Melee to make it a worthwhile investment. Considering the Purifier has no access to Terminator Armor and has no innate mobility tricks, running a Melee Purifier will only lead to disappointment.

At a range, however, the Purifier has some uses, and there are combinations of abilities you can take to turn up the heat.

This is where you should dump your first few points. The Purifier has no use for any other heavy weapon other than the Incinerator, and this tree makes that weapon much more effective. This tree boosts Damage, Range, and Arc, all of which are excellent. Vengeance is also a fantastic Auto Ability that will let you do more per turn providing you are killing enough enemies in one go.

Not only does it increase your damage output per ammo spent, but it also inflicts permanent blindness which is especially useful against tough range opponents like Blightlord Terminators, Bosses, and even Helbrutes. The Knockback effect is more situational and can be skipped entirely. If you want to maximize damage, you should avoid this upgrade at all costs as it will knock enemies out of range for a follow-up attack.

Finally, Flames Of Purity is buffed by the Incinerator Discipline too, making it a natural tree to dip into. It also has some synergy with other abilities, which can skyrocket your damage if RNG is in your favor.

If you are pushing Flames Of Purity as the main source of damage, which is possible, consider hunting down an Incinerator with higher than average ammo to take full advantage of the damage amplification.

This skill hides in the Astral Aim tree, which is a decent tree in its own right. You can fully invest in this tree if you want to add a source of single-target damage, but the real reason you are here is for Rapid Reload.

This is more of a dabble pick than something to focus on. Grenades can be very powerful, and the Purifier has some of the strongest Grenades in the game. He can deal more damage, more times per mission, and over a larger area.

This can provide a lot of utility to your squad, which is always a good thing. Not only that but there are multiple suits of Master Crafted Power Armor that also heavily buff Grenades. These suits of armor, plus this tree, can turn your Purifier into a walking nuclear warhead. 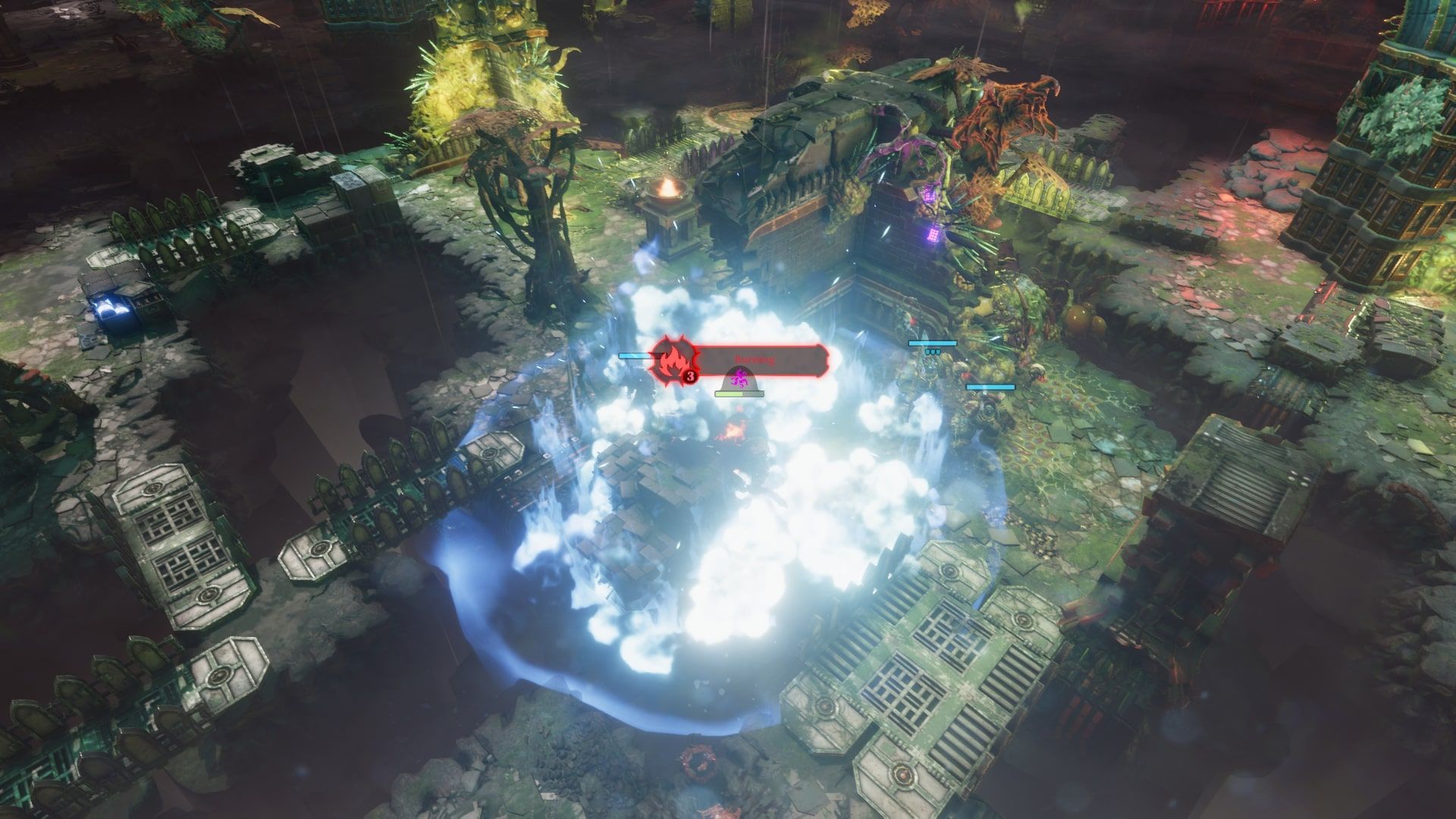 Purifiers have access to Unstoppable Conflagration, which is a very powerful ability locked behind some rather underwhelming ones. There is a case to be made, however, that it is worth the dabble, especially if you have a way of pumping WP and AP into your purifier for massive gains.

Unstoppable Conflagration increases your Purifier’s damage by up to +3 based on how many Psychic abilities you use in one turn. Realistically, you will probably only ever hit a +2, and even then, you will need to invest in both Cleansing Flame and Astral Aim to fully gain the benefits.

Once set up with our recommended skills, your Flames Of Purity will deal Weapon Damage with an additional +5 (minimum) to everything in a shockingly wide area. This is enough to kill every low-level enemy in the game in a single cast, and seriously damage anything tougher. With Rapid Reload, you can follow this up with more fire attacks that are still benefiting from a +4 damage boost.

If you run a Justicar, he can pass +3AP to your Purifier every turn, which will allow you to easily cast your spells, launch a Flames Of Purity, and still attack multiple times per turn, giving you enough damage to kill even groups of vehicles, terminators, daemons, and Plague Marines.

Going down this path will weaken your Purifier early on, but lead to much greater benefits once fully upgraded. High damage Incinerators with high ammo counts make this even stronger.