The Angels of Death. The Adeptus Astartes. The fist of the God-Emperor of Mankind and chosen sons of the Fallen Angel Sanguinius. Fancy titles for a race of vampiric superhumans in tank-like armour, and the correct way to address the mighty Blood Angels of Baal. They also just so happen to star in Warhammer 40,000: Battlesector.

Armed and armoured with the best mankind has to offer, the Blood Angels are the first and last line of defence against the Tyranid menace. Whether you are sending in the Death Company, or standing back and unleashing hell with the aptly named Hell Blasters, there are plenty of tricks you can pull off with the boys in red.

10 You Have No Limits 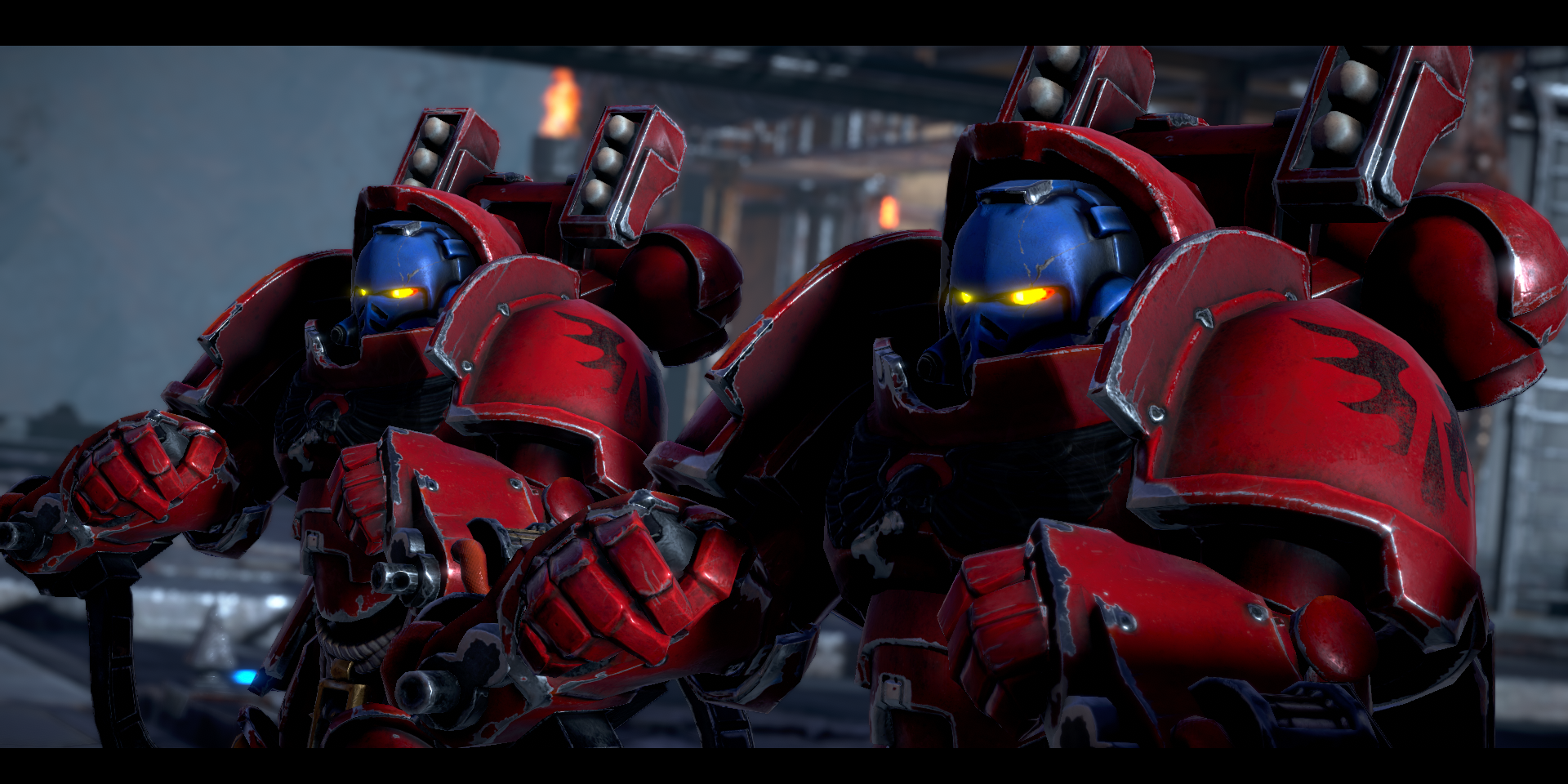 Blood Angels are the very epitome of universal. Whilst they do have a few hyper specialised units, most of their roster is more than capable of tackling multiple threats. Your opponent can’t just attack willy-nilly when even your most basic troop can delete entire hordes of enemies.

This makes playing the Blood Angels incredibly forgiving. A devastating unit like the Furioso Dreadnought is more than capable of going toe-to-toe with gigantic bio titans, clearing out hordes of smaller enemies, and gunning down medium-sized mooks. Sure, the Tyranids have units that are arguably better in any one specific area, but you have access to a menagerie of munitions that can kill everything. 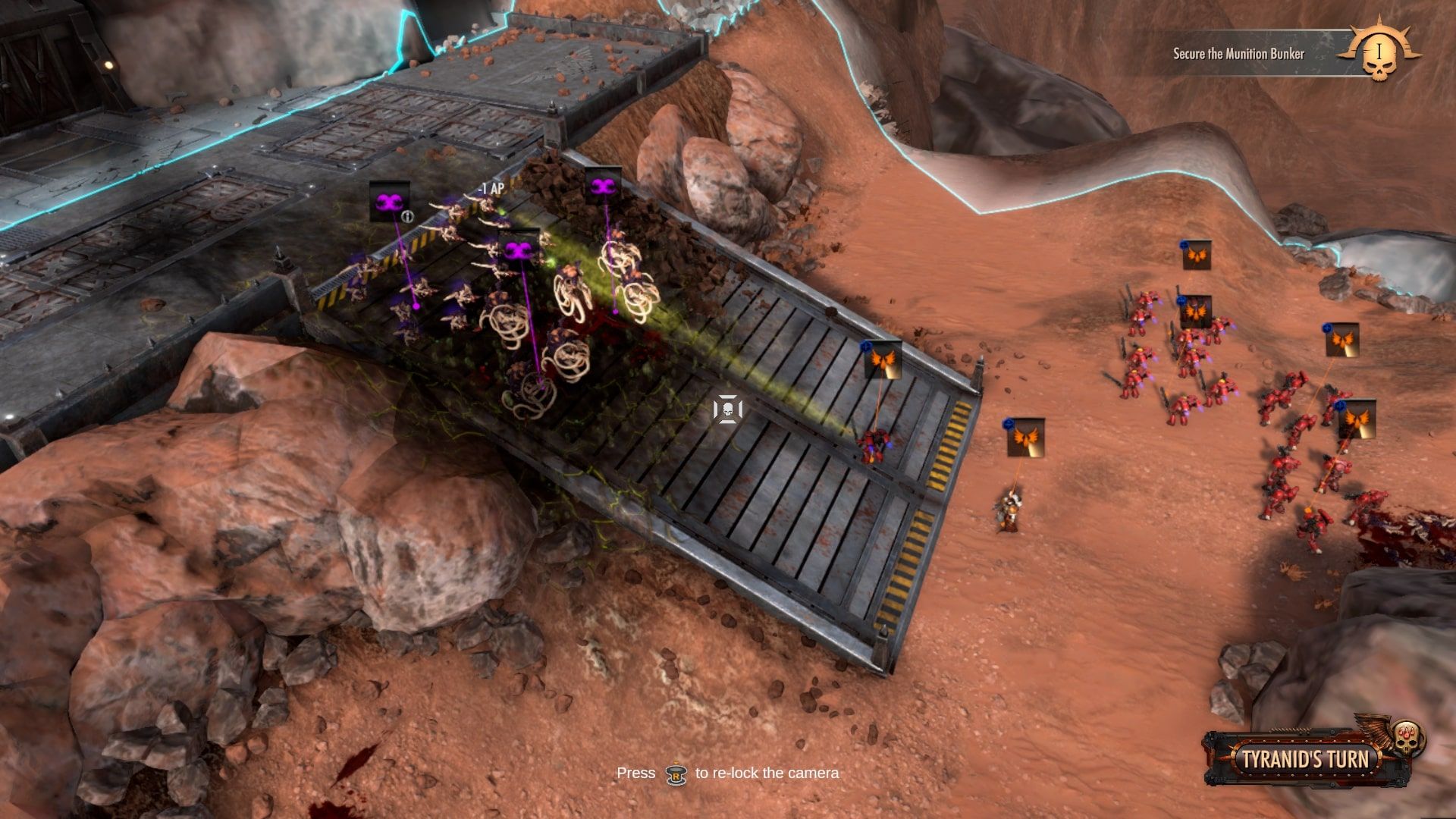 Blood Angel units are, for the most part, much harder to kill than their Tyranid Counterparts. Thanks to thick armour and hefty health pools, it takes a lot to down an Astartes. This extra layer of protection allows you to play a bit more aggressively. That doesn’t mean you should run in without a plan, and you absolutely don’t want to have your expensive units deleted by an enemy Exocrine, but you have a fair amount of wiggle room and space to make mistakes. 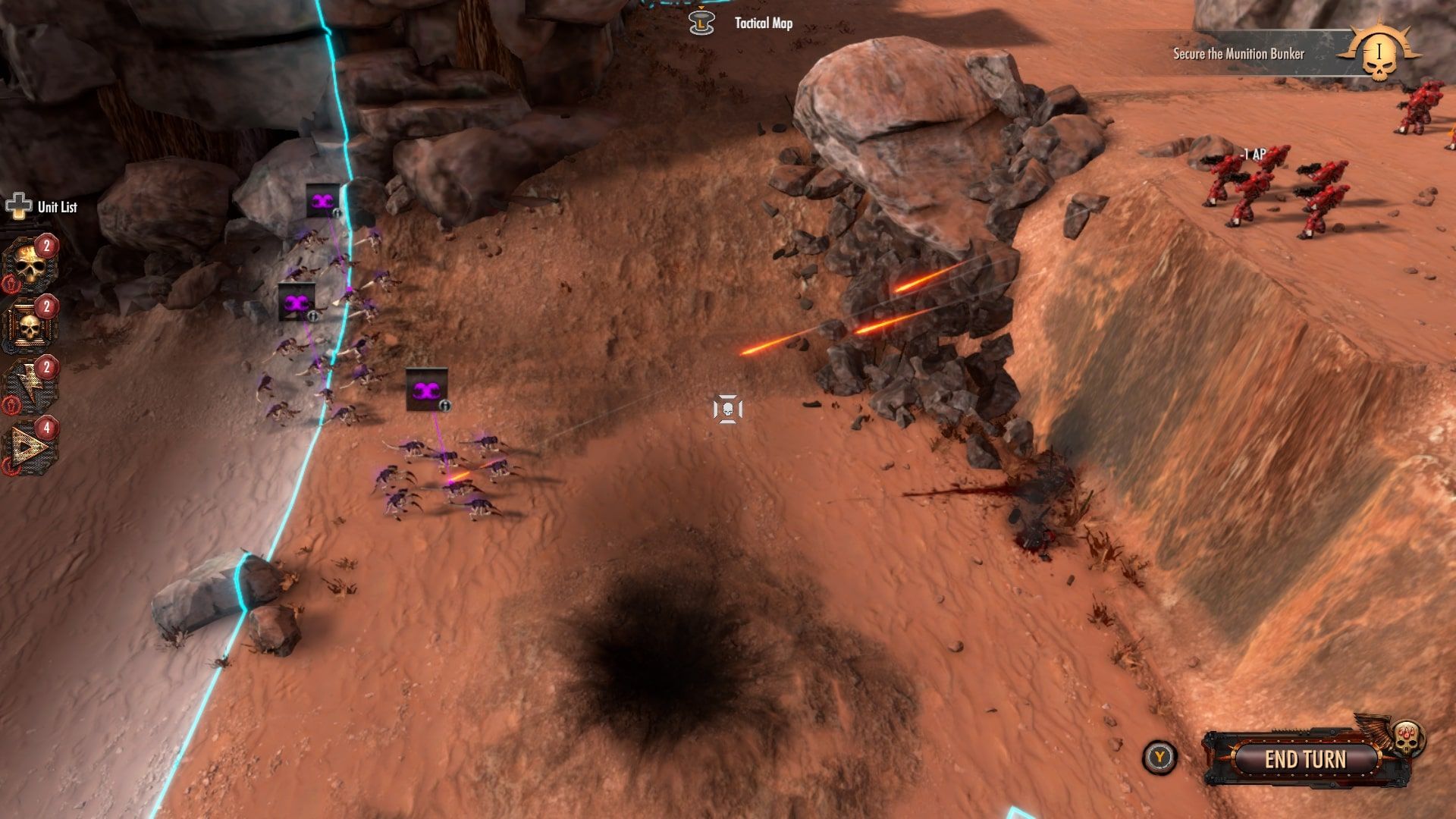 You may be tough and you may be well equipped but without vision, you are nothing but man-shaped fish in a barrel. This is an area where the Blood Angels suffer as the army simply lacks options when it comes to effective scouts.

Your only real option would be Land Speeders which, as the name suggests, are pretty darn nippy. You can move them up, find an enemy, and then move them back. Land Speeders are also fairly resilient, so it’s unlikely they will fall to Overwatch.

Scouting gives you details on enemy positioning, movements and army composition. Each one holds more value than the points and actions spent retrieving them. 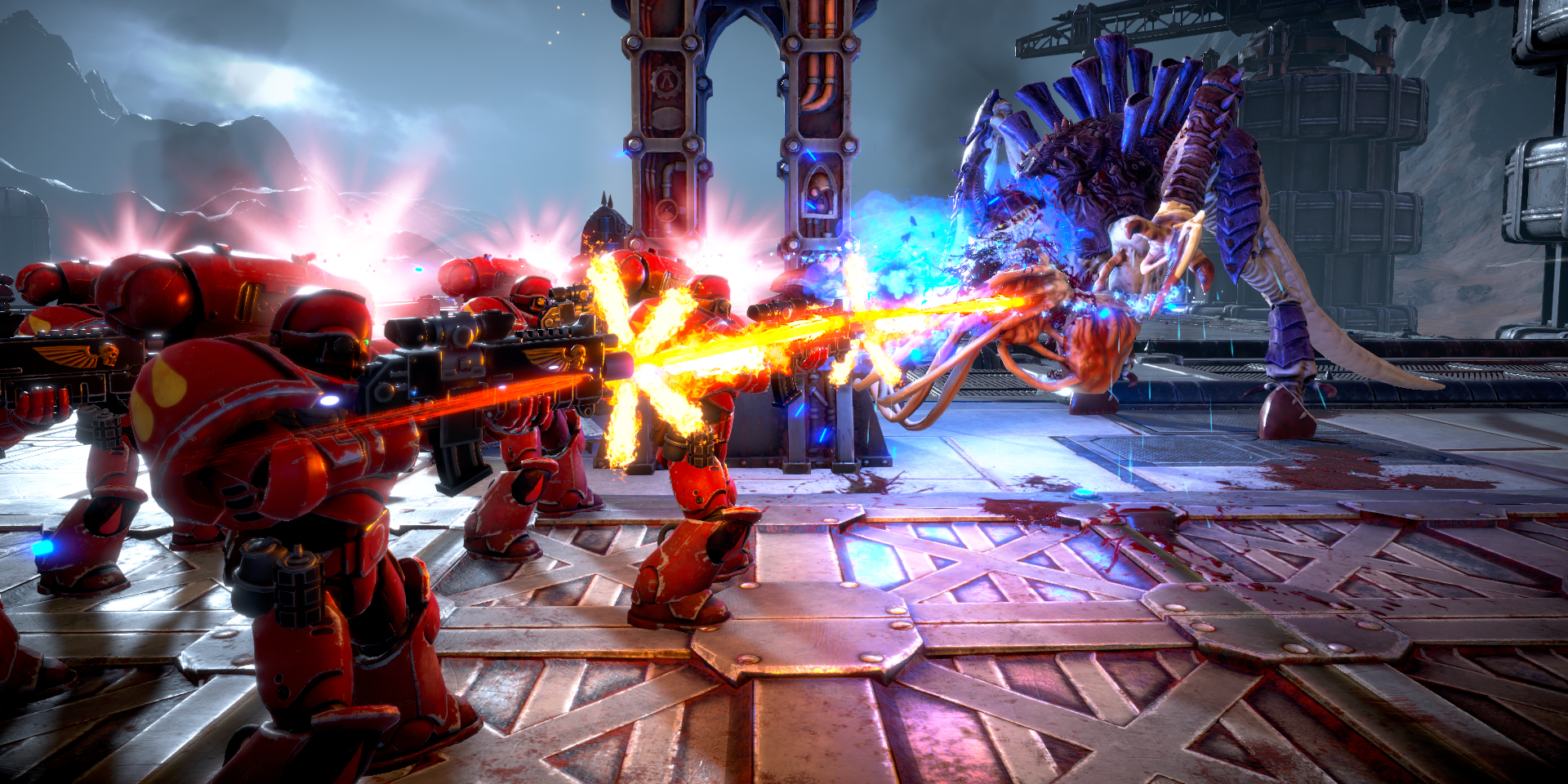 You are going to be outnumbered when facing off against the Hive Mind. This can get pretty overwhelming when hordes of guys suddenly start crashing against your lines. The main thing you have to remember when a battle gets underway is target priority.

Every unit has an armour value, and every weapon has a piercing stat. You want to leverage the right weapon against the right target. It might seem tempting to let loose a volley of hot plasma at an encroaching unit of Hormagaunts, but, providing you have a balanced list, you should have something more effective.

If your Hell Blasters are shooting at little gribblies, then their bigger units are running free. A similar thing can be said when talking about wasting small arms fire. There is very little point throwing grenades and shooting bolters at a big stonking Tyrannofex when those same weapons can be used to slaughter entire squads of lesser enemies. 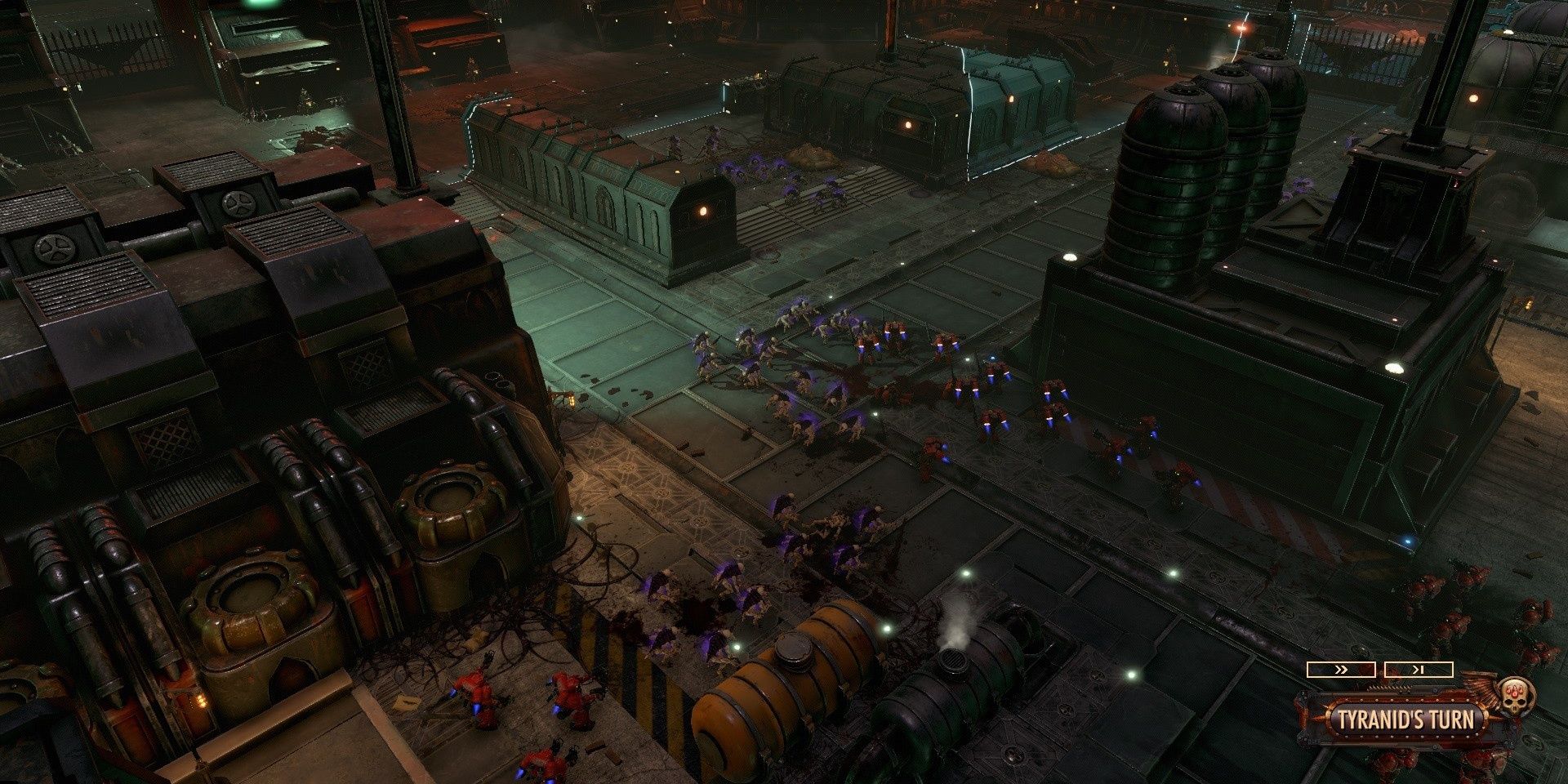 It’s very tempting for Blood Angels to clump together and form a wall of ceramite. This is rarely a good idea, especially when your enemy is legion. The last thing you want is for your forces to be flanked or ambushed.

To avoid this, even in an Exterminatus game, you need to dedicate units to defend your flanks. Have a few units of Marines ready to stymie your opponent's gambit as well as some Land Speeders. In an objective game, you will need to do this to win in general. If you are barreling down the middle of the map, then you aren’t taking the auxiliary objectives on the side. This is more or less an auto loss. 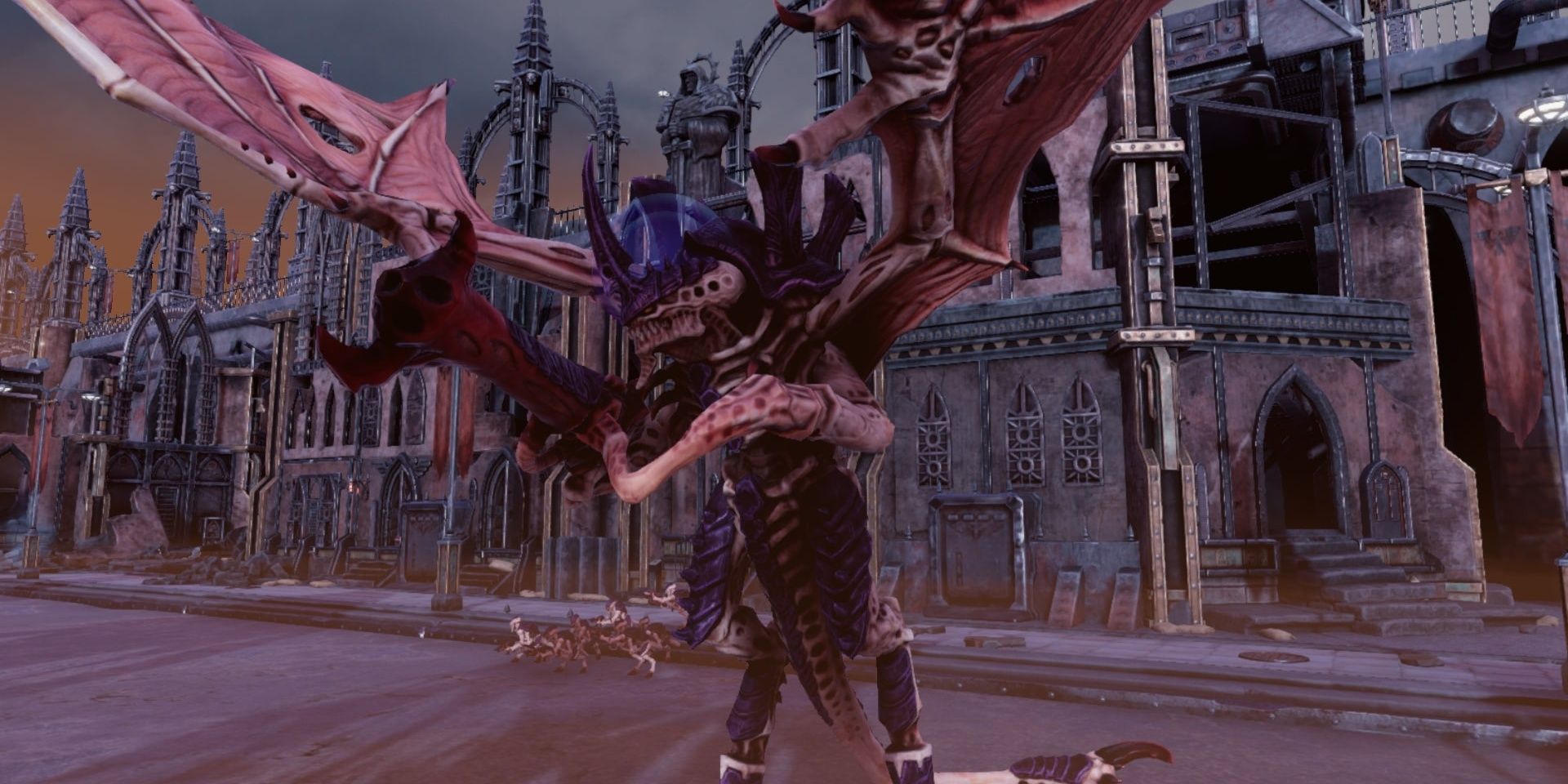 The Blood Angels are not exactly zippy when it comes to moving around outside of a few units. This means you are very susceptible to being baited. This is especially true when trying to take down an enemy Hive Tyrant.

These things are fast, they are tough, and they do loads of damage. Naturally, they are public enemy number one. Don’t be tempted to chase one, however. A competent Tyranid Player will be using their faster units to perform hit-and-run attacks, and if you go running after them, you will find yourself out of position and staring down an army of bugs.

Effective use of Overwatch, and focusing on other threats first will nearly always be your best bet. 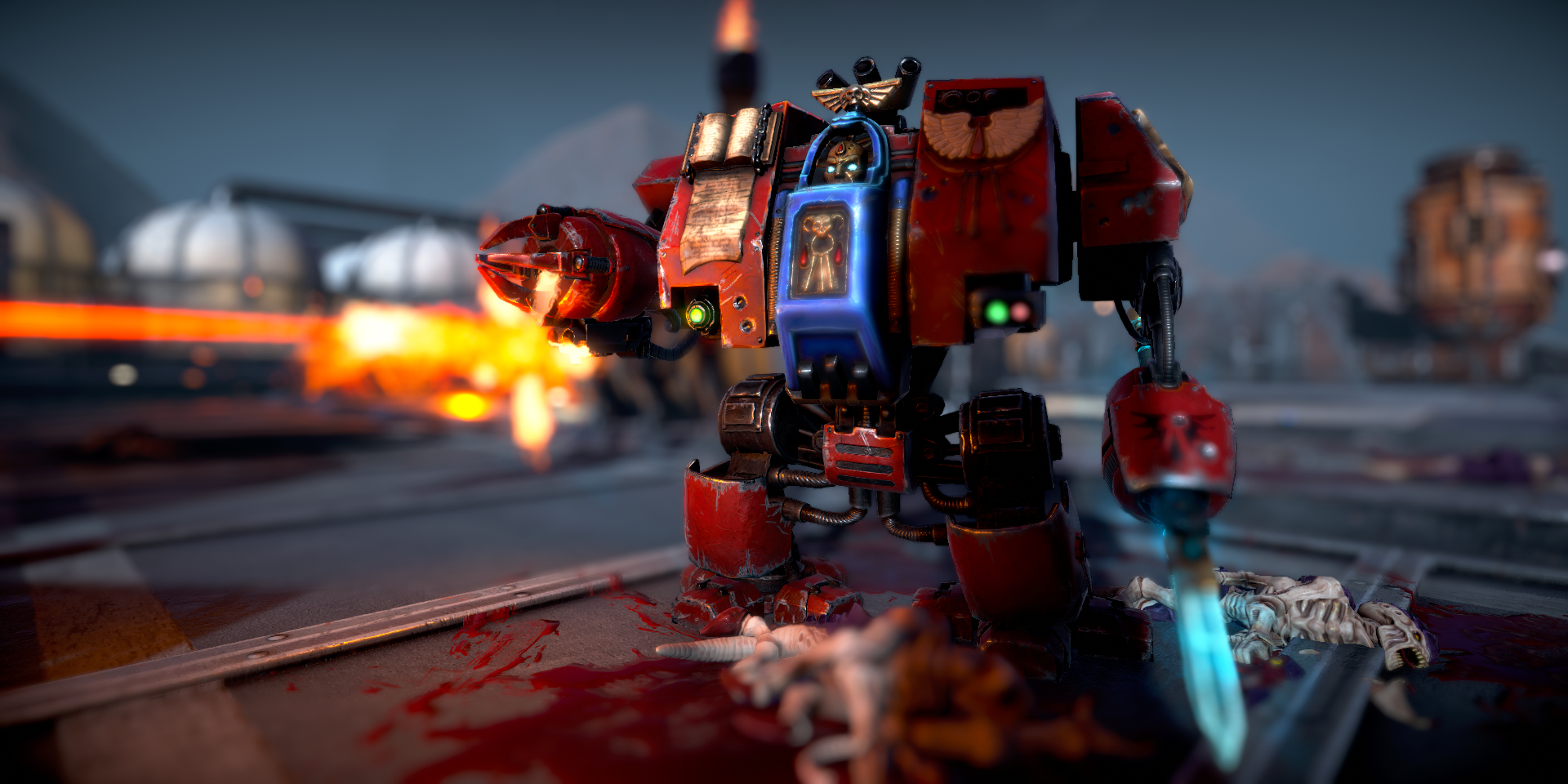 Army composition is arguably the most important step in Warhammer 40,000: Battlesector. If you mess up here, your forces are likely to end up dead in a Baalavian ditch. Thankfully, army building with Blood Angels is fairly simple thanks to how universal their units tend to be.

That being said, there are some things to look out for. If you are a fan of the incredibly powerful Furioso or Librarian Dreadnought and have brought a bunch with you – maybe consider a Tech Marine to keep them alive. Similarly, if you have expensive infantry then an Apothecary can go a long way to keeping them alive.

You can’t go wrong with Hell Blaster either. Often the most dangerous units in a Tyranid Army are the big things. Hell Blasters are tailor-made to punch holes through their armour, so having a few units slotted in just makes sense.

It might be tempting to ignore Intercessors because they are pretty darn basic, but they are invaluable. Not only can they be used to screen your more valuable units, but they have great range, a gun capable of mincing smaller enemies, and access to squad-removing grenades. They also add a bit of bulk to your force, giving you more map coverage.

The Blood Angels have access to a fair few characters – all of which are fantastic. They can heal units, buff their abilities and generally act as a force multiplier. A good unit can become great with the guidance of the right Hero.

Because Blood Angels are pretty potent combatants, it might be tempting to throw a character into the fray and use them as a beatstick. Slap on a Thunder Hammer and get swinging. This is a terrible idea because Blood Angel Heroes are prime assassination targets.

When it comes to winning the game – especially in Exterminatus – you don’t want your expensive characters getting killed. This is a huge point swing for your opponent and could easily lose you the game. Even the bulkiest of characters can go down in just a few shots, and if you leave your guys exposed, your opponent will take them.

As a rule of thumb, you want your Heroes surrounded by the units they are designed to support. This makes it harder to target them, which keeps them alive much longer. 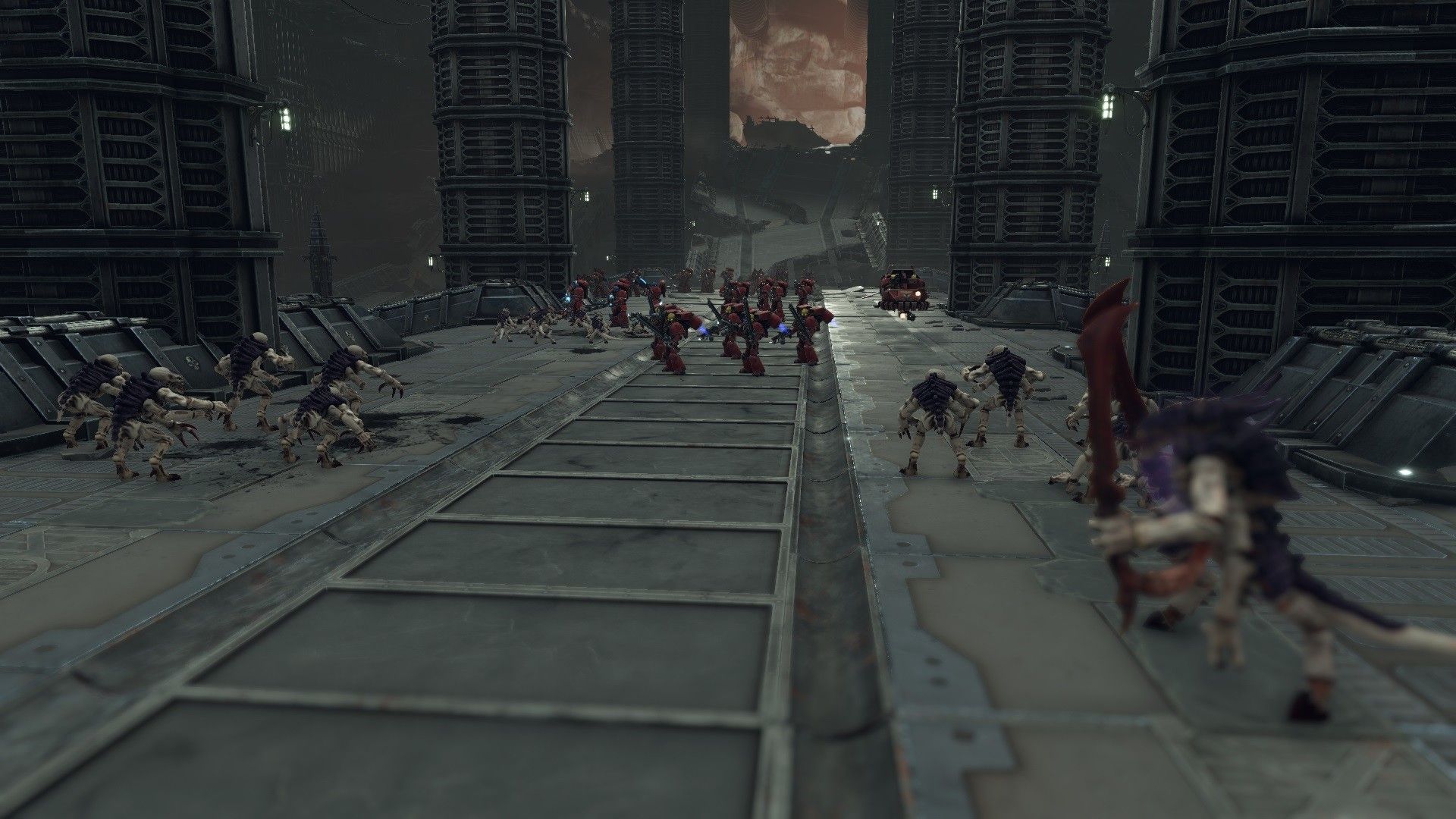 It is rarely a good idea to go in without a plan – but it’s arguably worse to go in with a plan that you fumbled due to impatience. The fog of war hides many dangers, and waltzing into it will only lead to ruin. If your opponent has units in Overwatch, the last thing you want to do is let them blitz one of your units.

You never want to be moving your units full distance in one click – it’s simply too risky. You want to move them one tile at a time and slowly peel back the fog of war. This lets you react to the changing battlefield, instead of locking you into a dead sprint and getting out of position.

This also applies once the battle is in full swing. Accuracy in Battlesector can change from tile to tile. Moving one step in the right direction could mean the difference between hitting an enemy, and fudging it. Every step opens up new opportunities, and rushing will just result in your missing out on them. 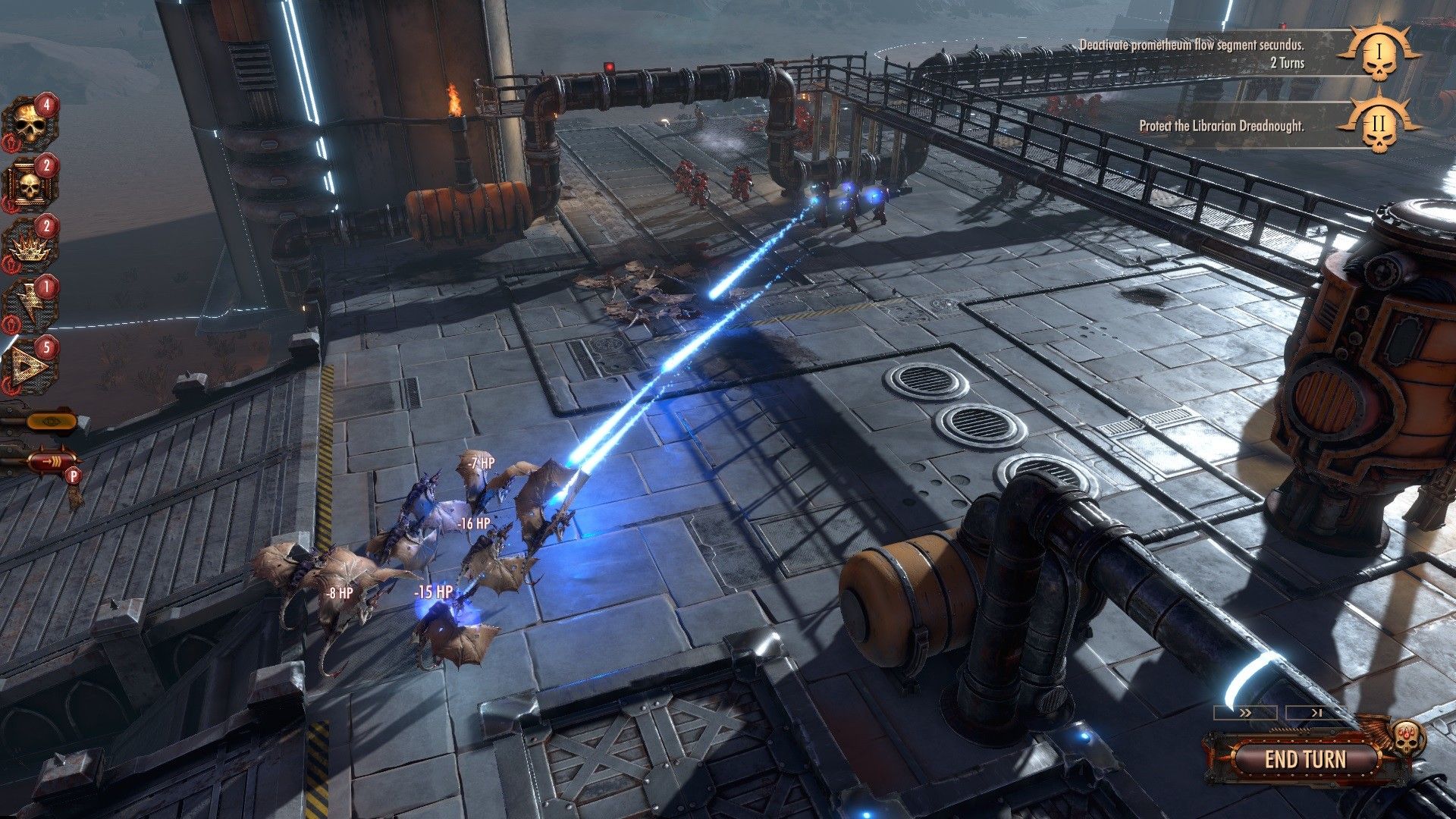 Overwatch should always be a consideration. It doesn’t matter if you are setting up a firing lane, or if you are moving around the open field, you need to constantly be aware it exists.

If you don’t Overwatch effectively, the enemy can easily move around your lines and land flanks. This can be devastating if they get a bead on one of your powerful support or damage pieces.

You also don’t want to walk into fire all willy nilly. This has been covered before, but the fact it’s being mentioned again should show just how important it is to factor in. At no point do you want your incredibly expensive Hell Blasters getting nuked by an Exocrine off in the distance.