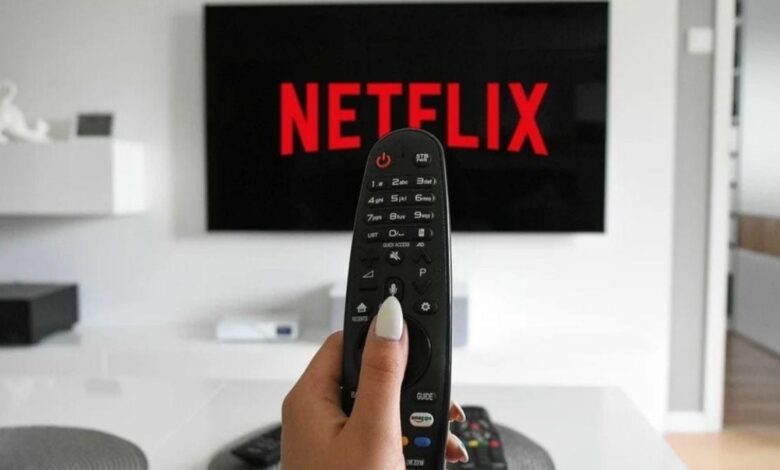 Netflix has thousands of awesome titles, but did you know they’re not all available worldwide?

Yes, most of the time, geo-blocks stop people from watching movies and TV series. Unfortunately, a lot of Netflix titles are only available in specific countries.

How do you know if a show is available in your area?

Well, you could just look up the title on Netflix and see if it shows up for you. If it doesn’t, it’s not available in your country.

But what if you want to find out where else it’s available? So that you can use an unblocker (like VPNs) to watch it?

You could ask that question on Reddit, sure, but it might take a while until you get useful answers – or any at all. Isn’t there an online lookup tool you can use instead?

Actually, there is! We’ll tell you all about it in this quick guide. We’ll also show you how to use a VPN with Netflix, and answer any other questions you might have. 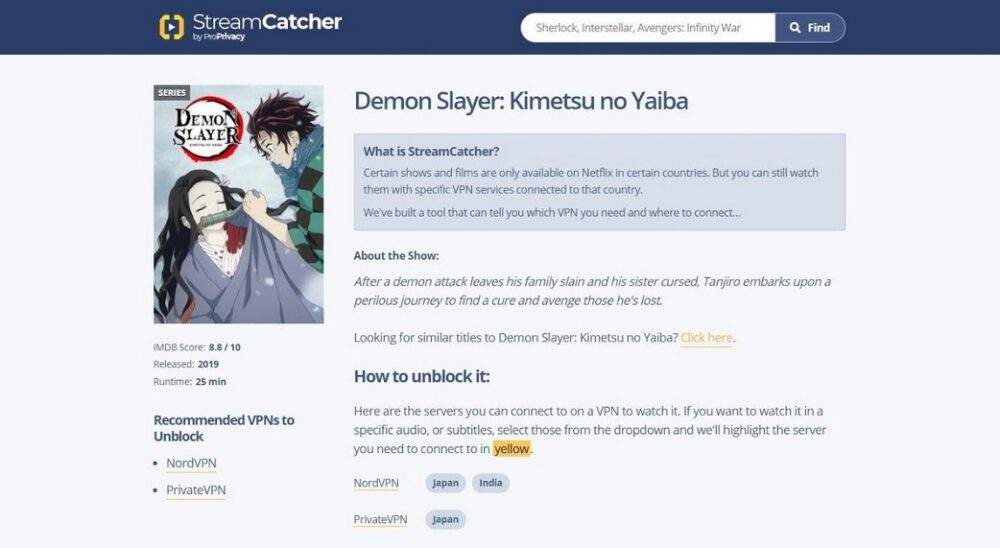 In our experience, it’s has to be StreamCatcher. ProPrivacy developed the tool, and it’s a very useful and easy-to-use Netflix library crawler. You just type the name of the title you want to check out, hit Find, and the site will instantly tell you where it’s available.

The design is very pleasing to look at. Most tools of this kind usually have a pretty poor user experience, and are a bit clunky to use.

Please keep in mind that this service will display the locations the devs tested. So just because you see one or two doesn’t mean the title is only available there. But if it is available in other countries, those locations will likely be added to the list as the devs test them.

Other than that, this tool comes with some nice VPN recommendations. In this case, they’re very accurate since they’re backed by ProPrivacy’s research. That site is a pretty big VPN reviewer, and they stress-test services regularly to see which VPNs have the best speeds, and which ones can unblock Netflix without any issues.

We can confirm that the suggestions are accurate too. We tried out both NordVPN and PrivateVPN to unblock Demon Slayer, and were able to do it.

How Do You Use a VPN to Unblock Content on Netflix?

You don’t really need to do much. Just subscribe to any of the VPNs recommended by the tool we mentioned above. Then, download the right app for your device. So if you’re using Windows, get the Windows 10 VPN app.

Next, just follow the installation guidelines. Don’t worry – the app setup will tell you everything you need to do. It won’t take more than a minute!

When you’re done installing the app, run it and log into your VPN account. Afterwards, connect to a VPN server. Make sure its location is a country where the Netflix title you want to binge is available.

Well, you’re ready to have fun then! All that’s left is to head to Netflix, log into your account, and search for the show or TV series you want to watch. You should have no problem finding it now.

Can I Use Other VPNs? 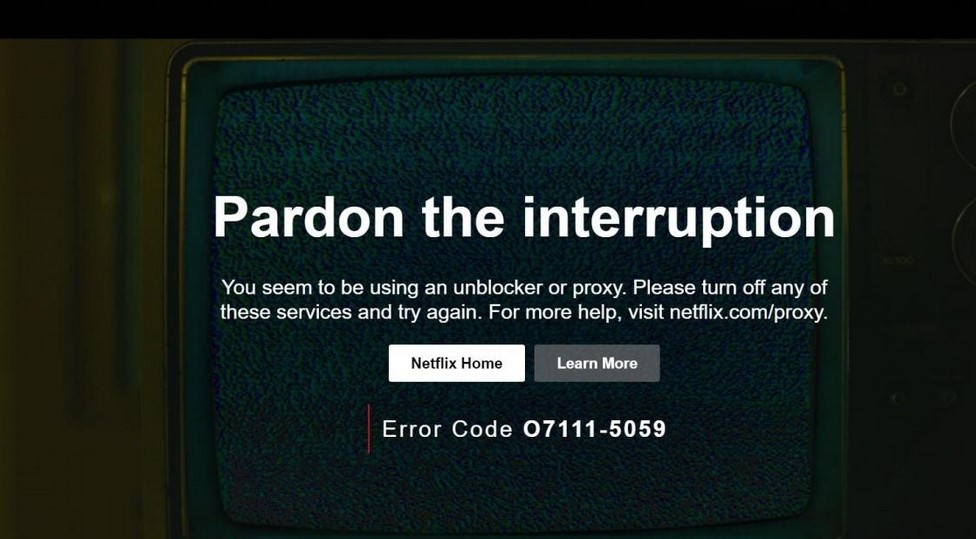 Sure. We also tested ExpressVPN, Surfshark, and CyberGhost VPN, and had a pretty good streaming experience with them too. They’re also fast, have unmetered data, and work very well with Netflix.

Unfortunately, we can’t comment about other VPNs. They might work well too, but keep this in mind: if they’re not optimized well for Netflix, you won’t be able to unblock it whenever you want. You’ll often see the Netflix proxy error, actually.

By “optimized well for Netflix,” we mean the VPNs need to lease new IPs for their servers on a regular basis. Otherwise, Netflix will eventually blacklist them.

If you end up using a different provider, please let us know how it went in the comments. We’re curious to hear what other VPNs work well with Netflix. We’d also like to know which ones can’t unblock the site too.

Why Are Netflix Titles Geo-Restricted?

Probably because Netflix doesn’t own the content they geo-block. In that case, they need to license it. And they can’t always get global rights – either because other competitors already have rights to other countries, or because it wouldn’t be a worthwhile investment.

Netflix Originals are usually available everywhere Netflix is. But there are some exceptions – Lilyhammer and Orange Is the New Black, for example. In that case, Netflix sold the licensing rights for specific countries before it launched there. So even though the streaming giant is now available in those regions, it can’t stream its original shows without buying back the rights first.

Can You Use Other Unblocking Methods? 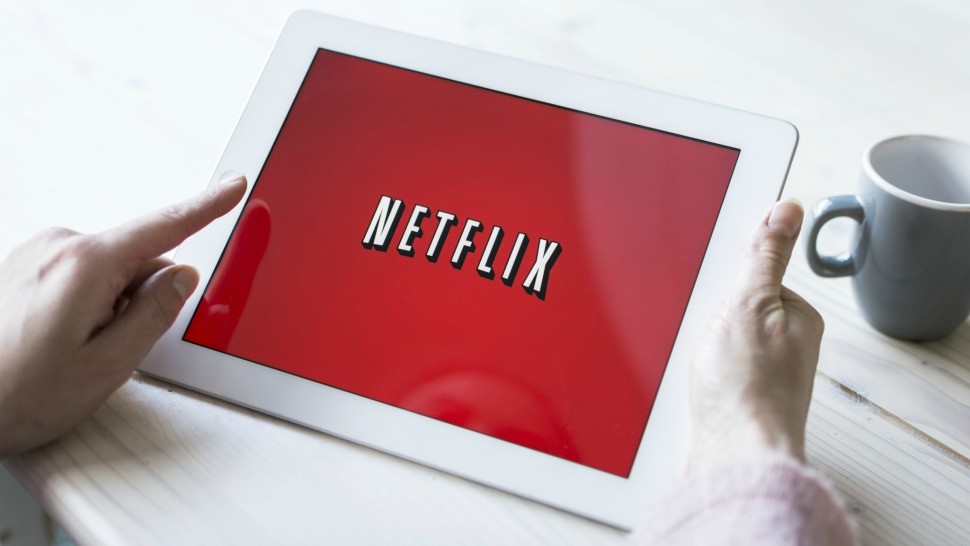 Yes, there are two more unblocking tools that work:

ProPrivacy’s tool is a very good movie finder for Netflix. You can use it to quickly check what VPN server locations you can use to unblock a specific title (so, you can also find out where that title is available).

If you know other tools like this one, please let us know. Similarly, if you know other ways to find out which countries have which Netflix titles, we’d love to hear what you have to say.