For many years, fans of WWE games desperately wanted to see the return of general manager mode. WWE 2K22 didn't exactly bring it back but introduced a very similar mode called MyGM. In it, you take control of a WWE brand and put on shows every week. Your goal is to beat your opponent in the ratings and generate more revenue than them.

Beyond the quest for viewers, MyGM is very different from the old general manager mode. As such, even veterans of the old version may be confused by some elements of MyGM. If so, here is a guide that breaks everything down. 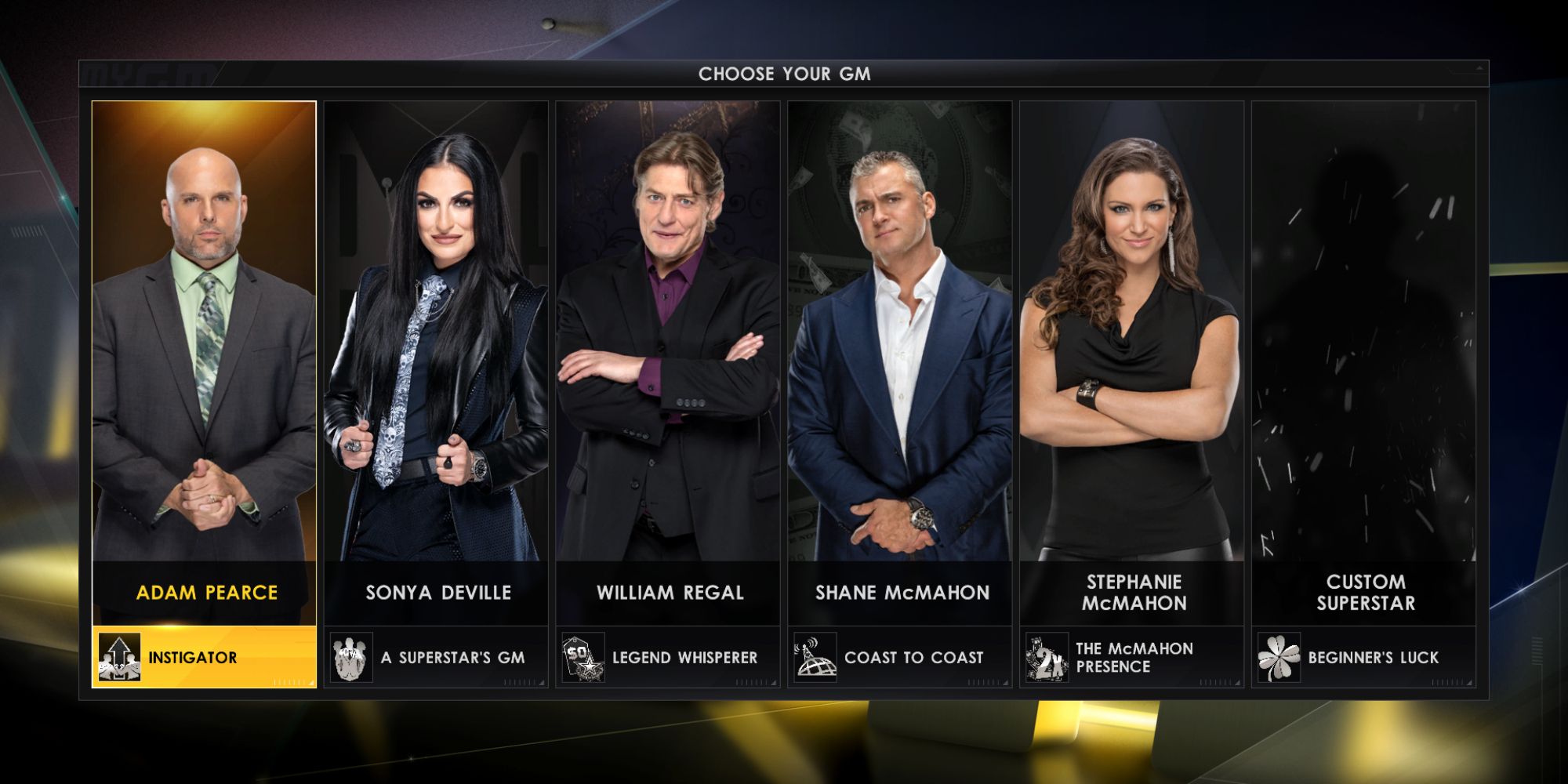 Selecting your general manager is the first thing you have to do. There are six options, and each of them come with their own power card that you can use during the season. This is all of them:

For a custom superstar, you must create them BEFORE loading up MyGM.

All of these cards have value to some degree, and the best one depends on what sort of GM you are. For starting players, though, the Instigator (Adam Pearce), Legend Whisperer (William Regal), and The McMahon Presence (Stephanie McMahon) will likely serve you best. 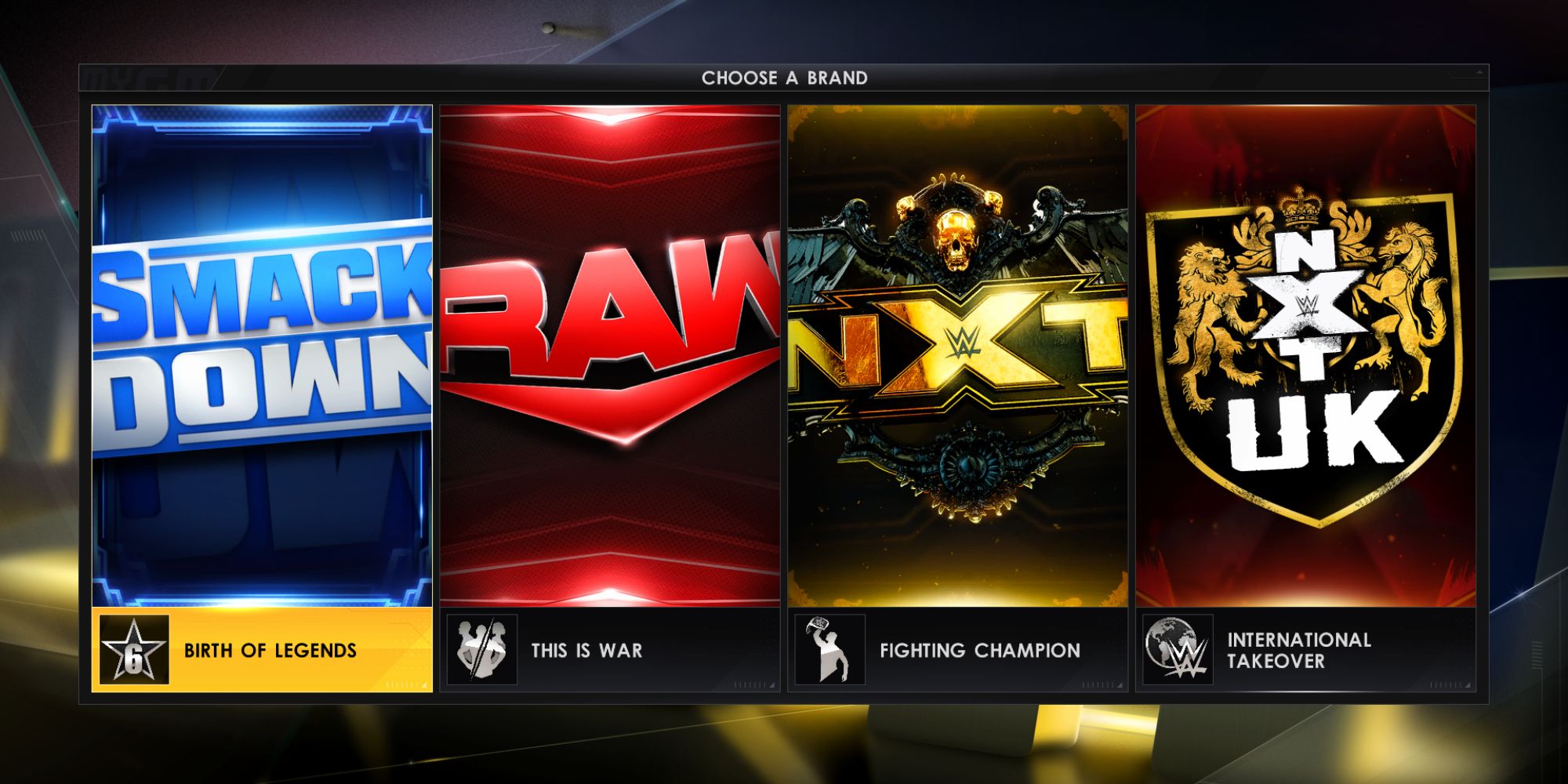 After you've got your GM, you have to pick the brand you want to control. As with the general managers, the only thing that separates the options is the power cards. This is what each brand's card does:

The random element of the SmackDown and Raw cards make them a bit hit-or-miss. Either version of NXT is a solid choice, though. However, if you really want to be one of the main roster brands, there's no real harm in picking them. 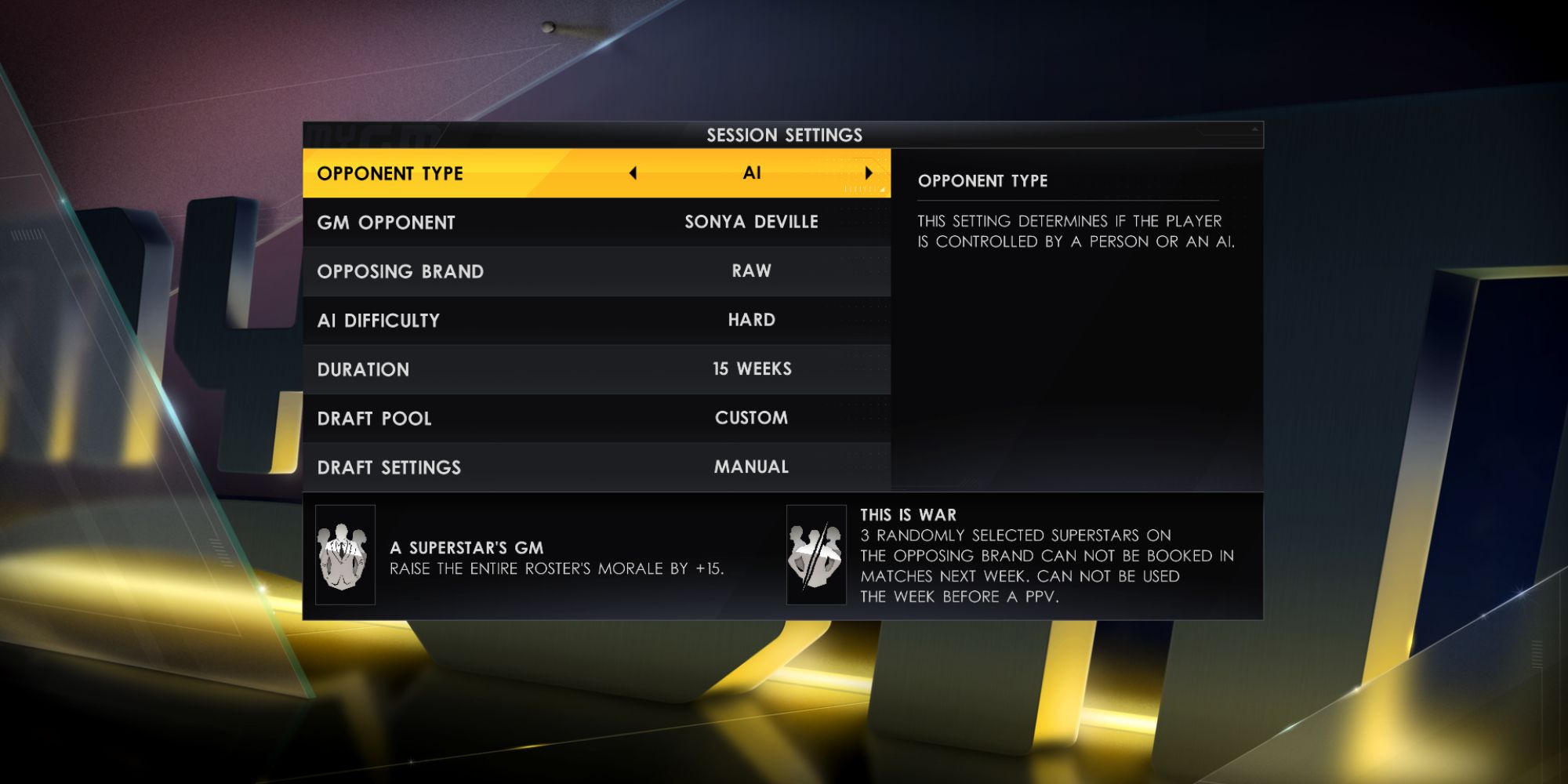 Next, you get to set up your session of MyGM. These are the options you have: 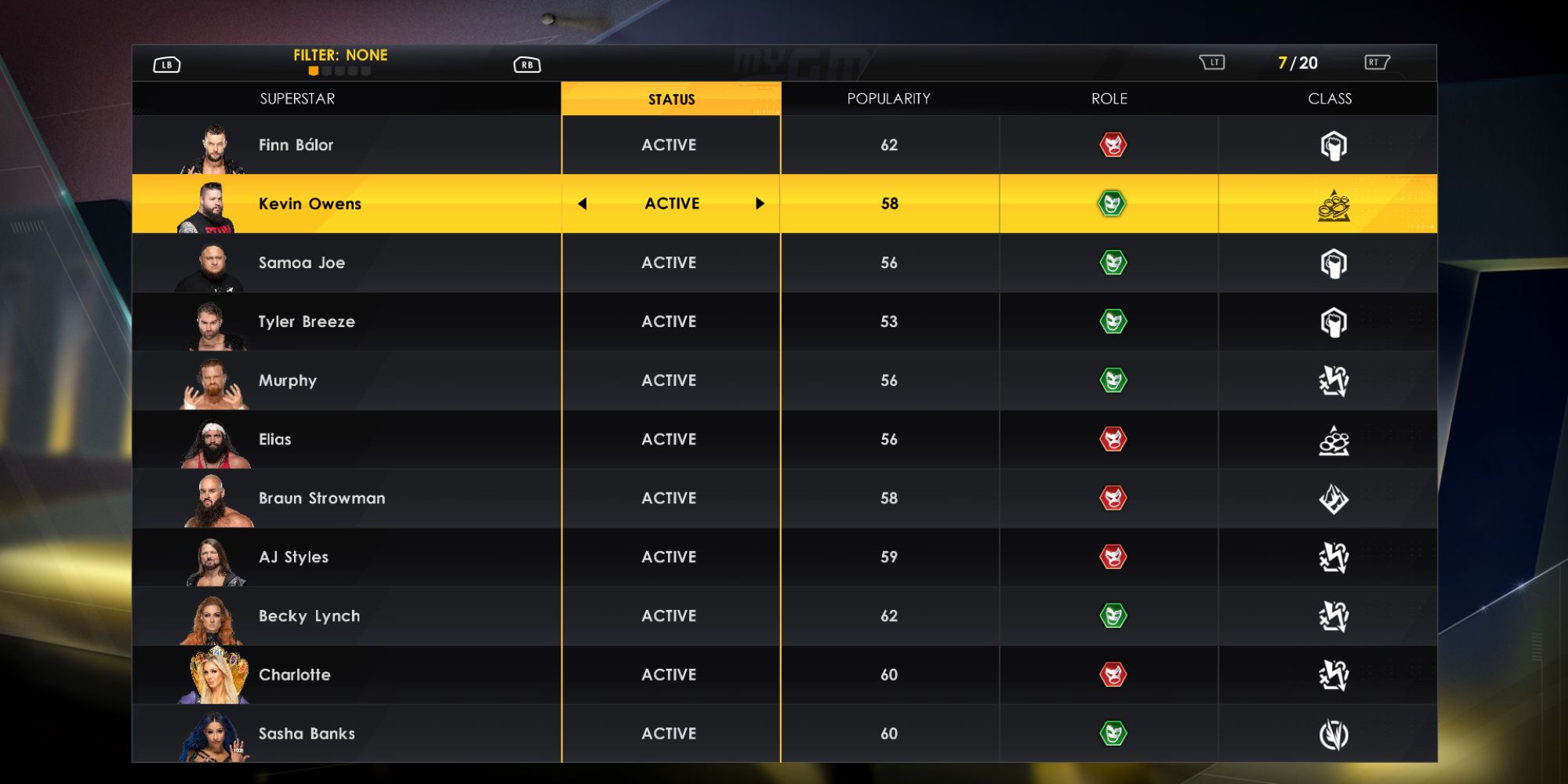 If you want to customize your draft pool, hover over the option and hit the button that's indicated at the bottom of the screen.

This is everything you can change about your draftable superstars:

After you've edited everything, you can save the pool to use it in future MyGM runs. 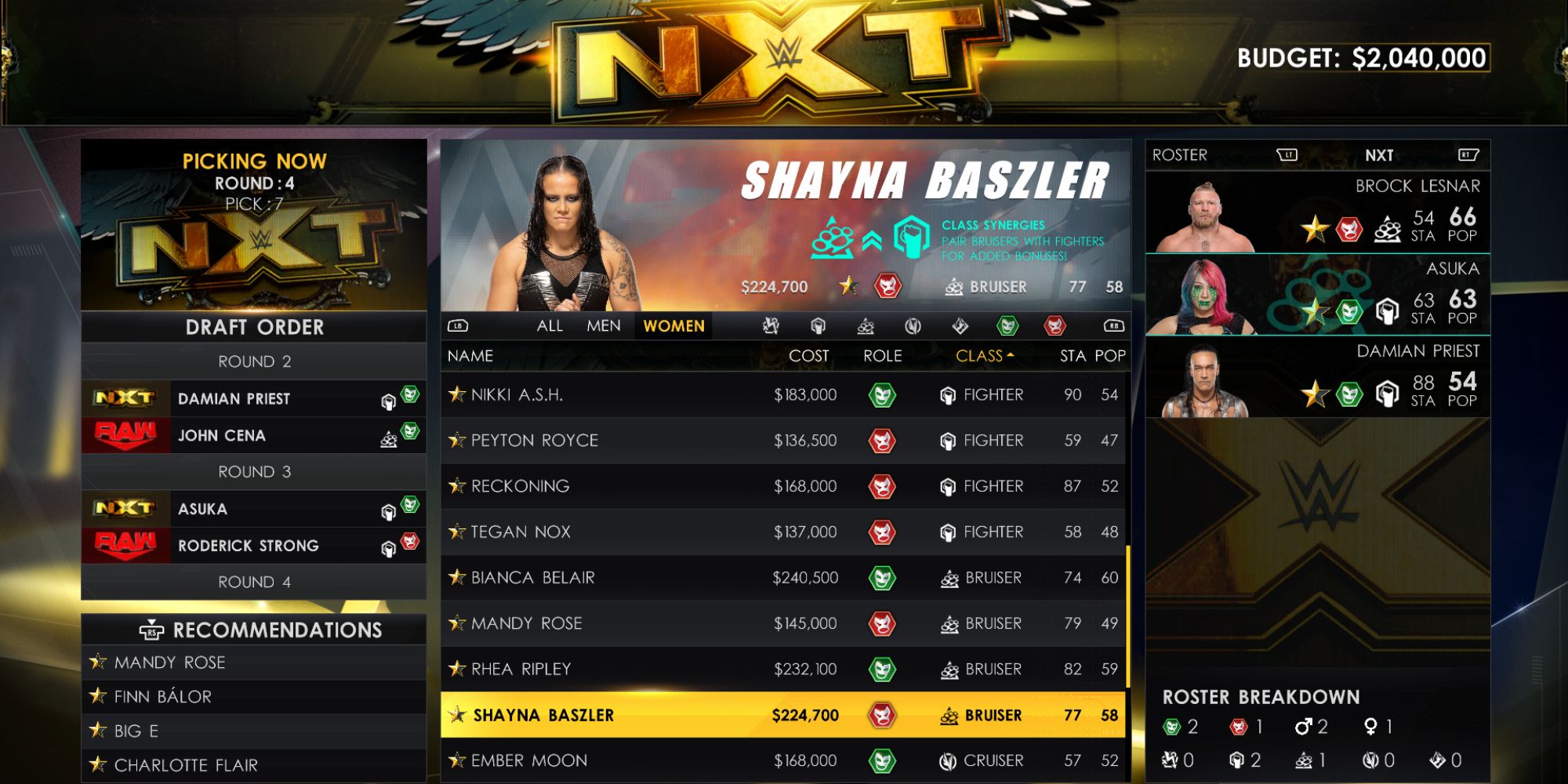 During the draft, you and the opposing GM take turns to select your superstars. You must draft a minimum of eight wrestlers using your budget of $2.75 Million – naturally, the biggest and most popular stars cost the most.

To draft a strong roster, here are the things you should consider:

You can also take a look at the game's recommendations in the bottom left corner if you need some help with drafting. And don't worry, there's no time limit for your picks. 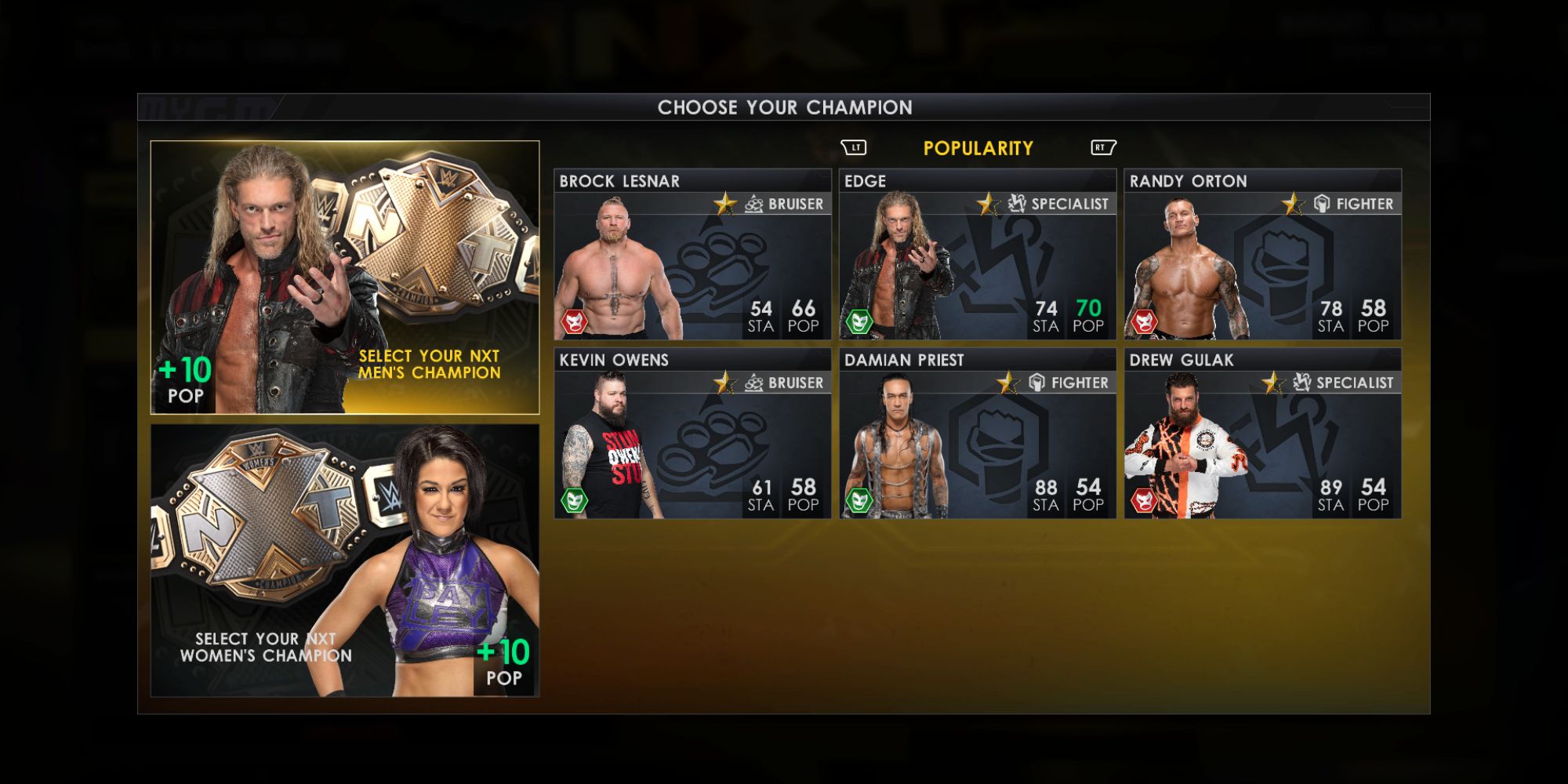 Once the draft is complete and you've had a small interaction with Triple H, you get to pick your starting champions. Every brand only gets two titles, one for the men and one for the women. The people you choose get a significant boost in popularity.

It's up to you who you select as it doesn't make much difference in the long term. However, it's always good to have people on your roster who are very popular, which you can achieve by putting the championships on some of your bigger stars. 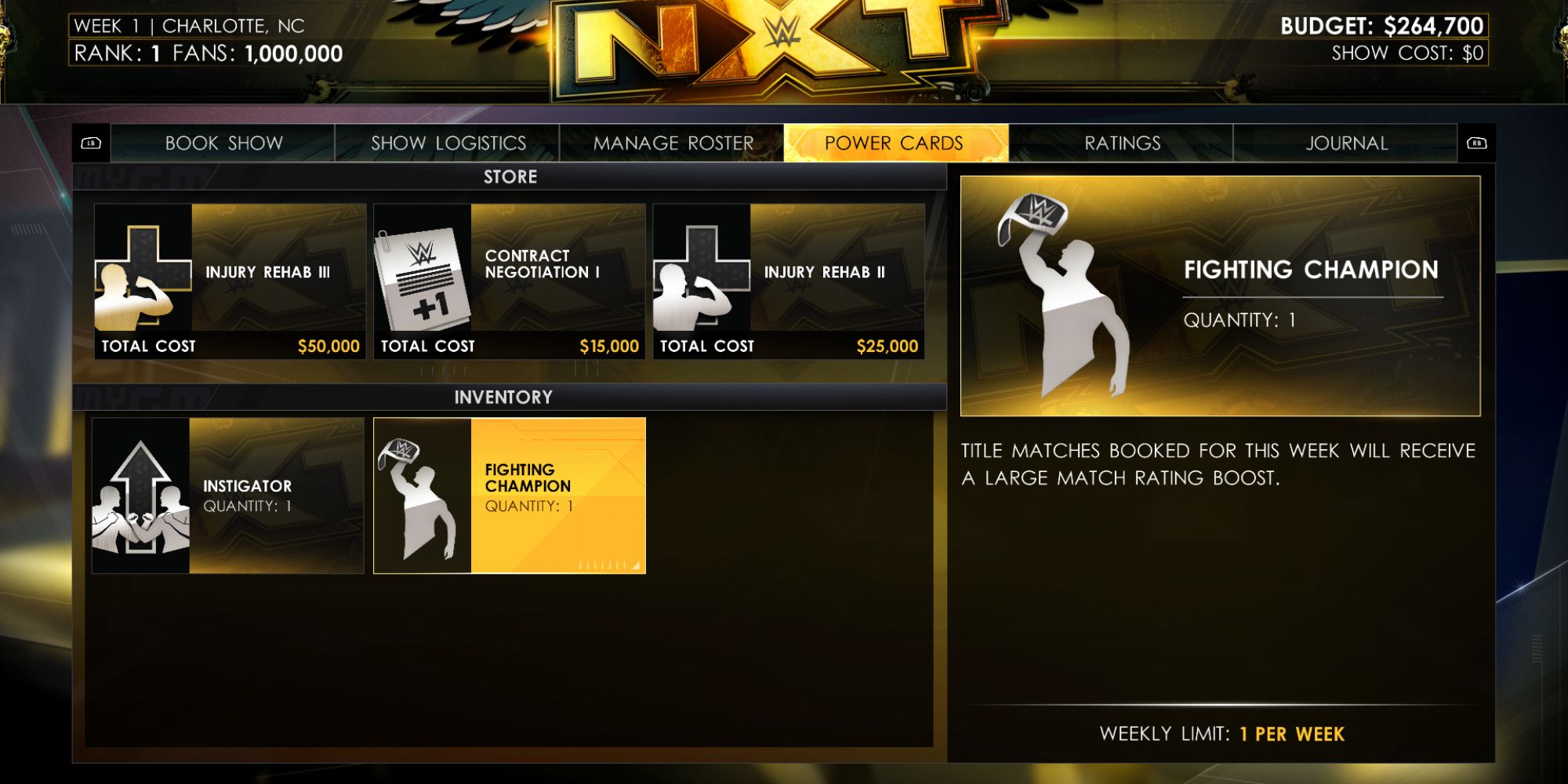 On the main MyGM menu, you may notice there is a power cards tab. As the name suggests, this is where your power cards are kept. You'll start the mode with the two you get from your general manager and brand. To acquire more, you must either complete commissioner goals or buy them with in-game money. You can do the latter from the power cards tab mentioned earlier. Every week, there are three on offer, and the line-up changes regularly.

What power cards actually do is difficult to explain because it depends on the card. Each one does something that either benefits you or messes with the competition. Use them when you think the situation calls for it. 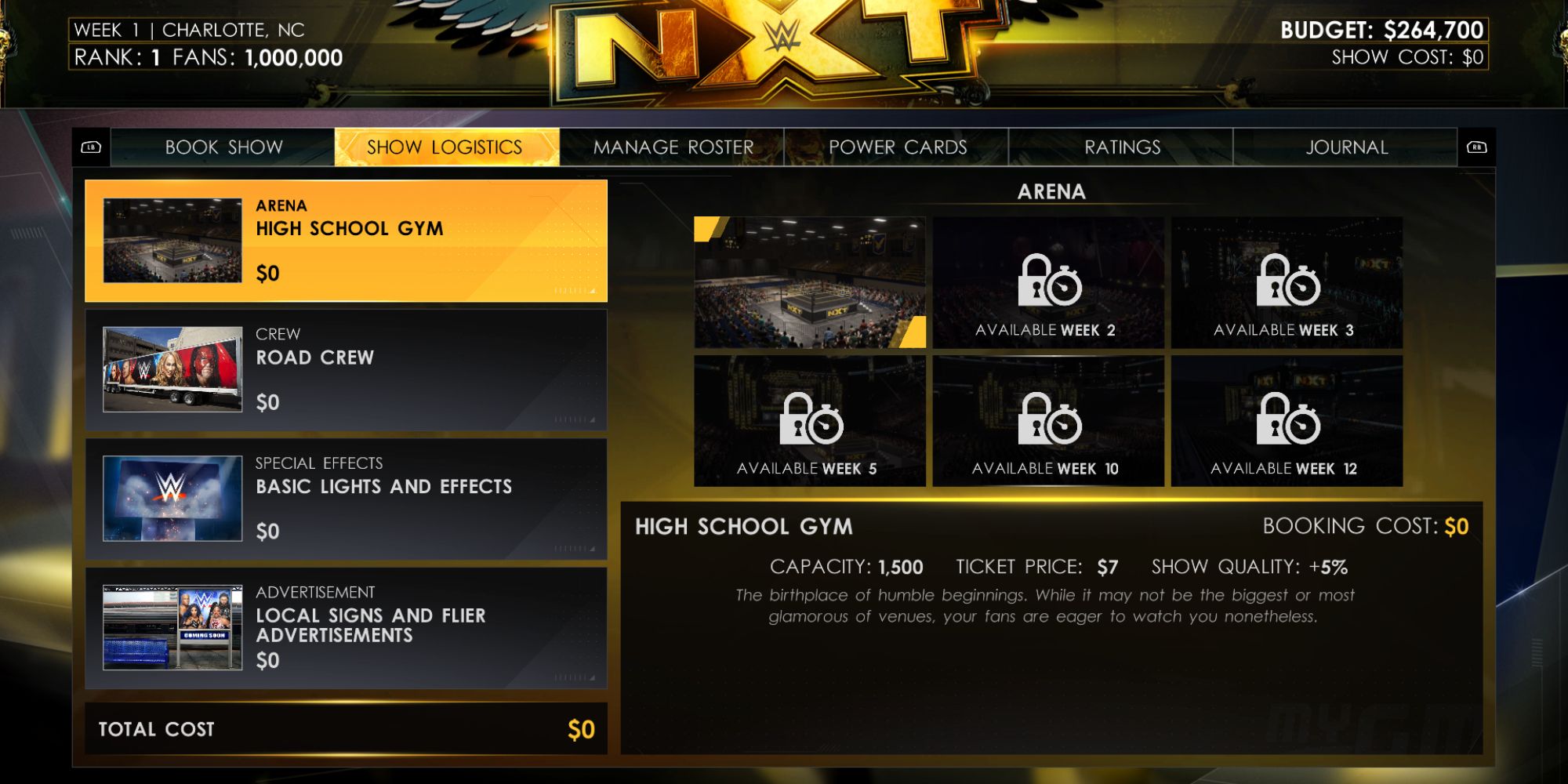 In MyGM, it isn't just your match card that impacts your success. It's also important to put on a great show from the production side of things. Therefore, pay plenty of attention to the show logistics tab.

In there, you can choose your arena, crew, special effects, and advertising. As you go through the weeks, you unlock better and more expensive options in those four categories. Selecting the higher-priced ones improves your show quality, increases your fan base, and makes more money.

It means you don't have to rely on always outdoing your rival in match quality. In fact, if you have good logistics, you can sometimes have a worse card than your opponent and still gain more fans than them. 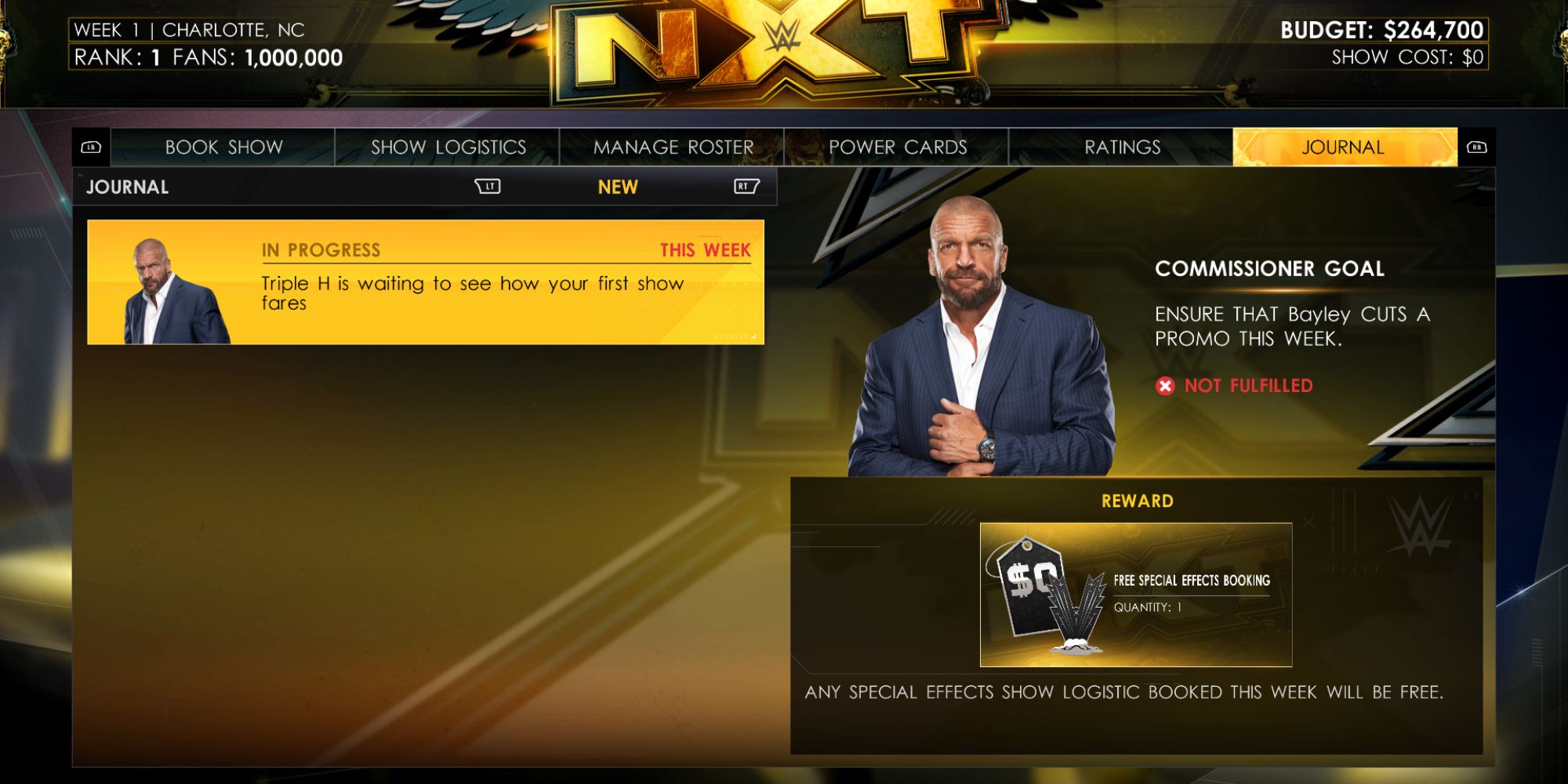 Before you book a show, you should always check the journal tab. It includes Triple H's commissioner goal, any promises you've made to members of your roster, and any other noteworthy pieces of information.

Triple H gives you a new commissioner goal every week, and it always revolves around your show. For instance, you may be asked to make sure a certain wrestler does a promo that week or leave someone off the card altogether. Your reward for following the command is a power card. They'll be times when you should ignore the request, such as if he asks you to keep your champions off the PPV card. But it's up to your own judgment whether any given task is worth the card.

As for the promises, these will appear after conversations you've had with your superstars. If you keep a promise, the wrestler will get a boost in morale, whereas if you don't, the opposite will happen. Low morale can lead to members of your roster leaving the brand. 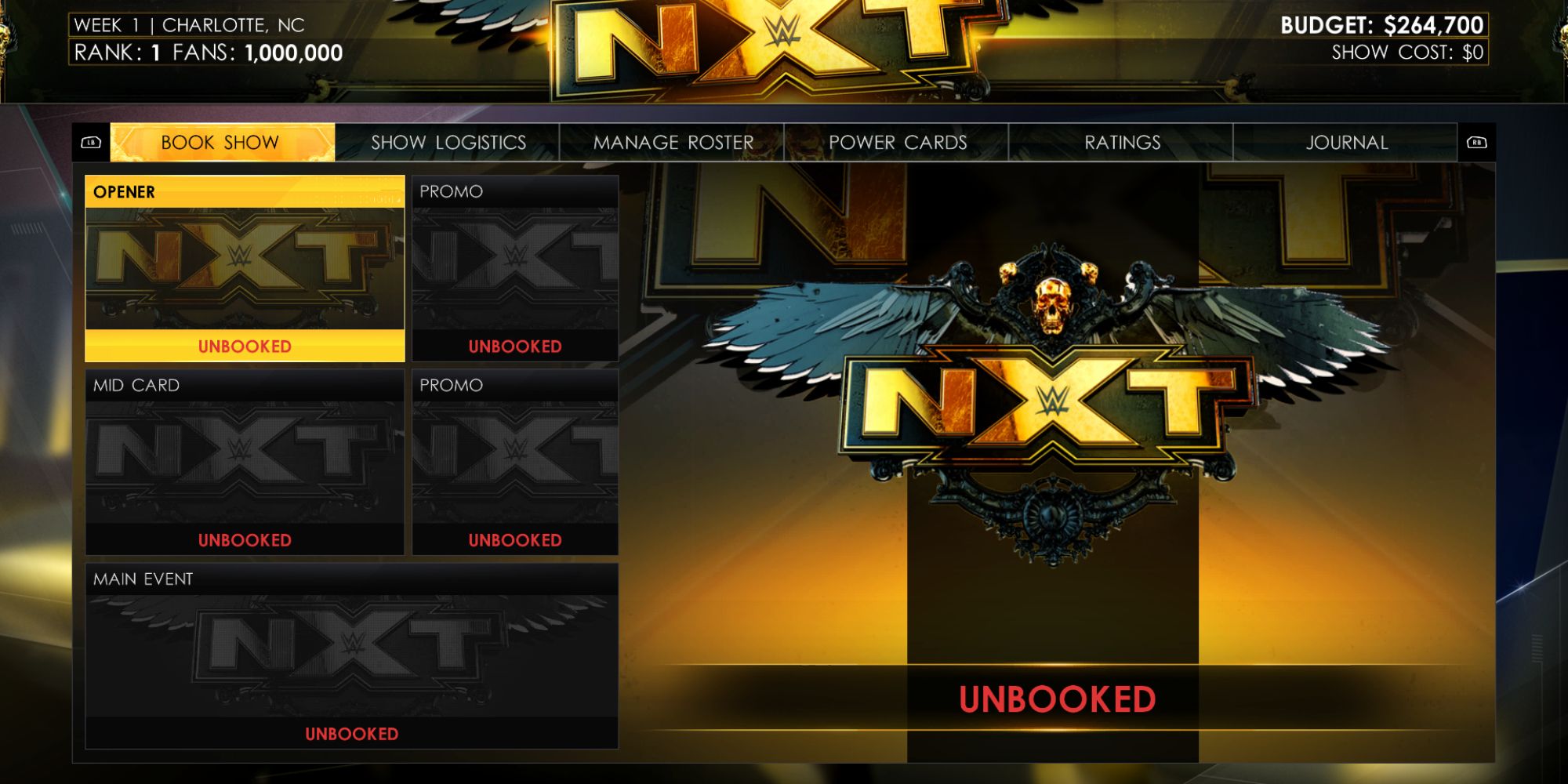 The amount of matches and promos on any given card depends on what kind of show it is.

Putting A Match Together 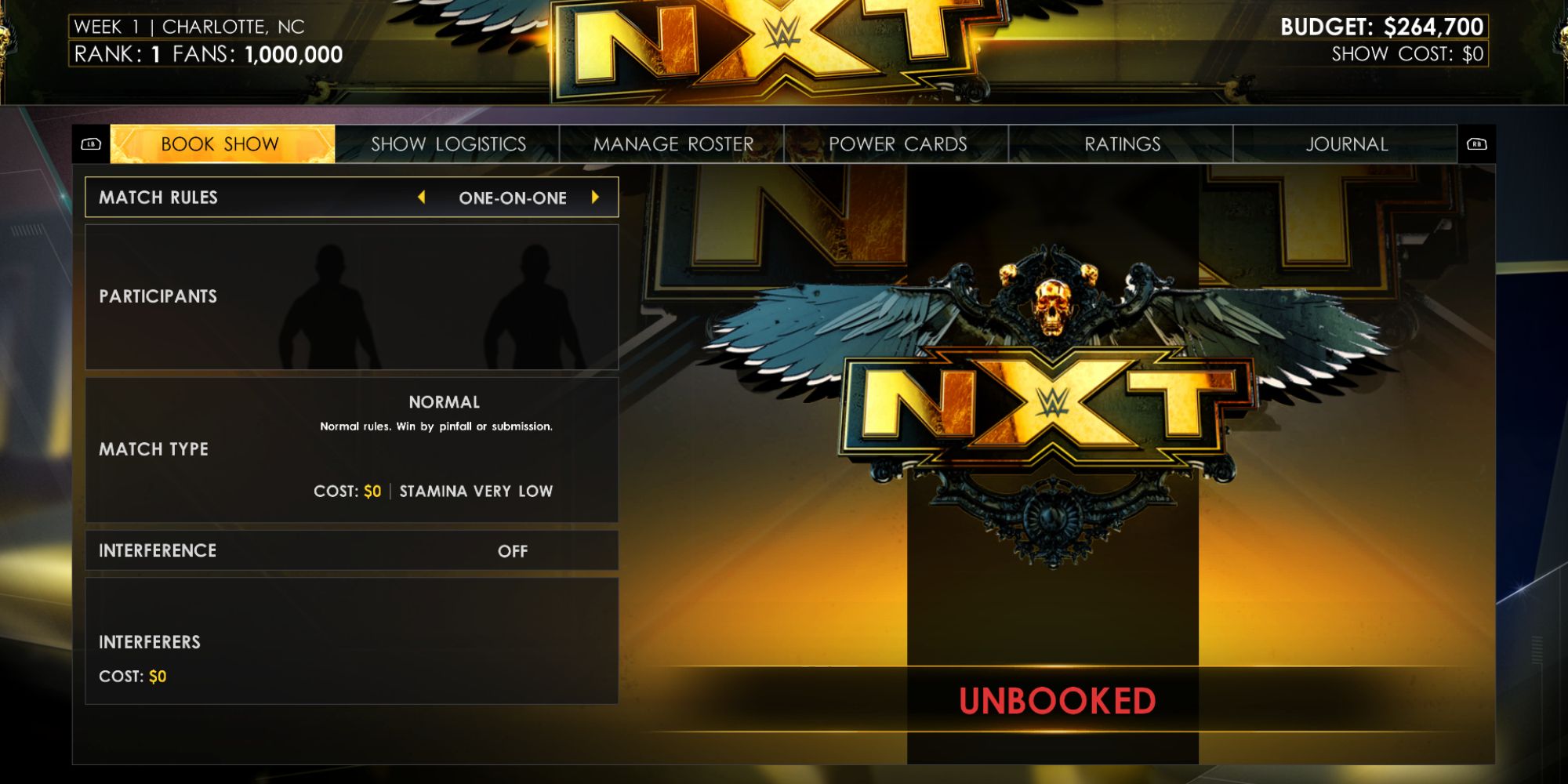 These are the options you get when setting up a match: 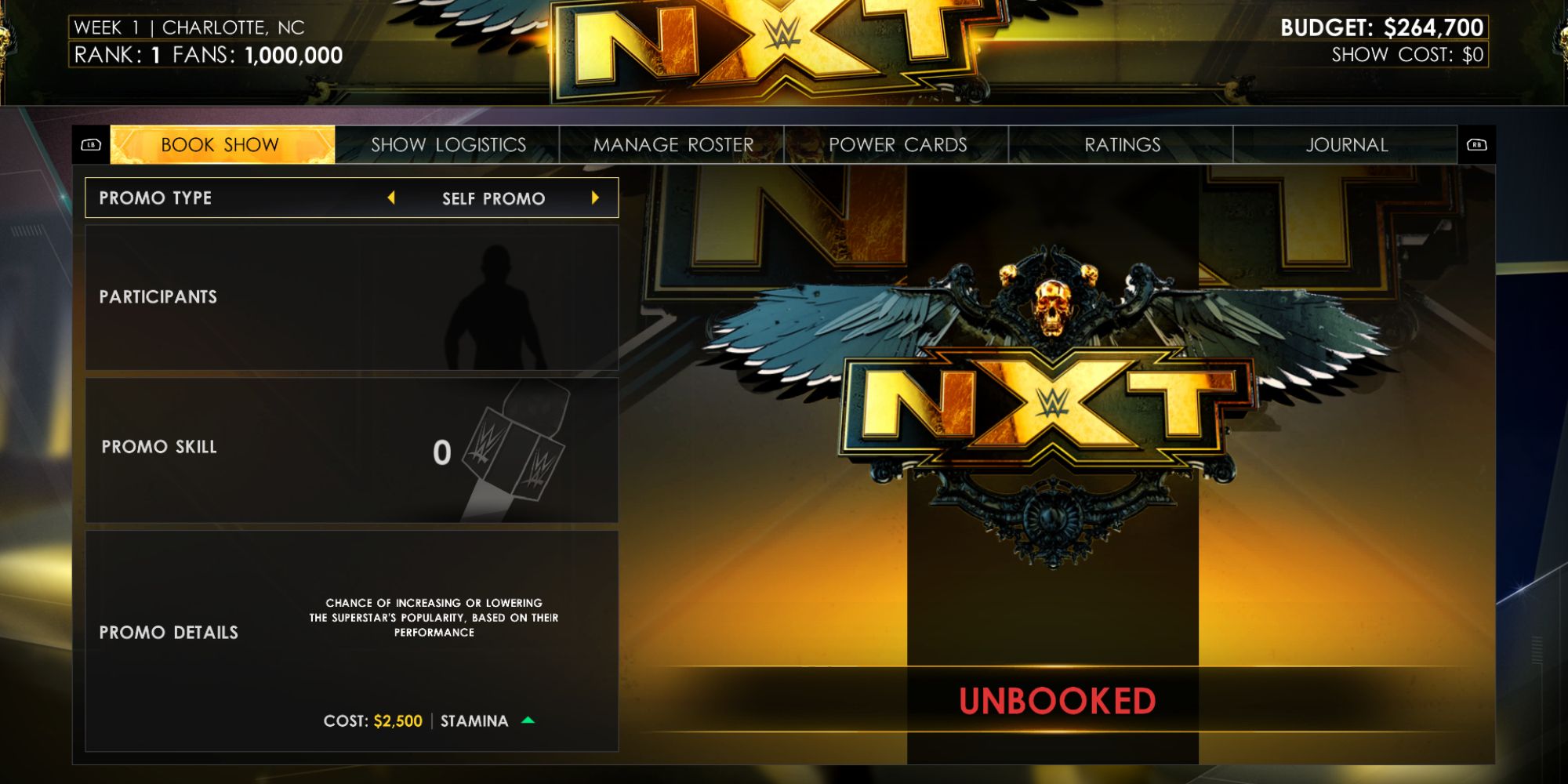 There are several types of promos that you superstars can cut. Each one has its own benefits. This is all of them:

Any superstar doing a promo instead of wrestling will regain some stamina, but not as much as they would've if they'd not been on the show at all. You should also take note of a wrestler's promo skill, as the higher it is, the better the promo is likely to be.

Things To Consider When Putting A Show Together 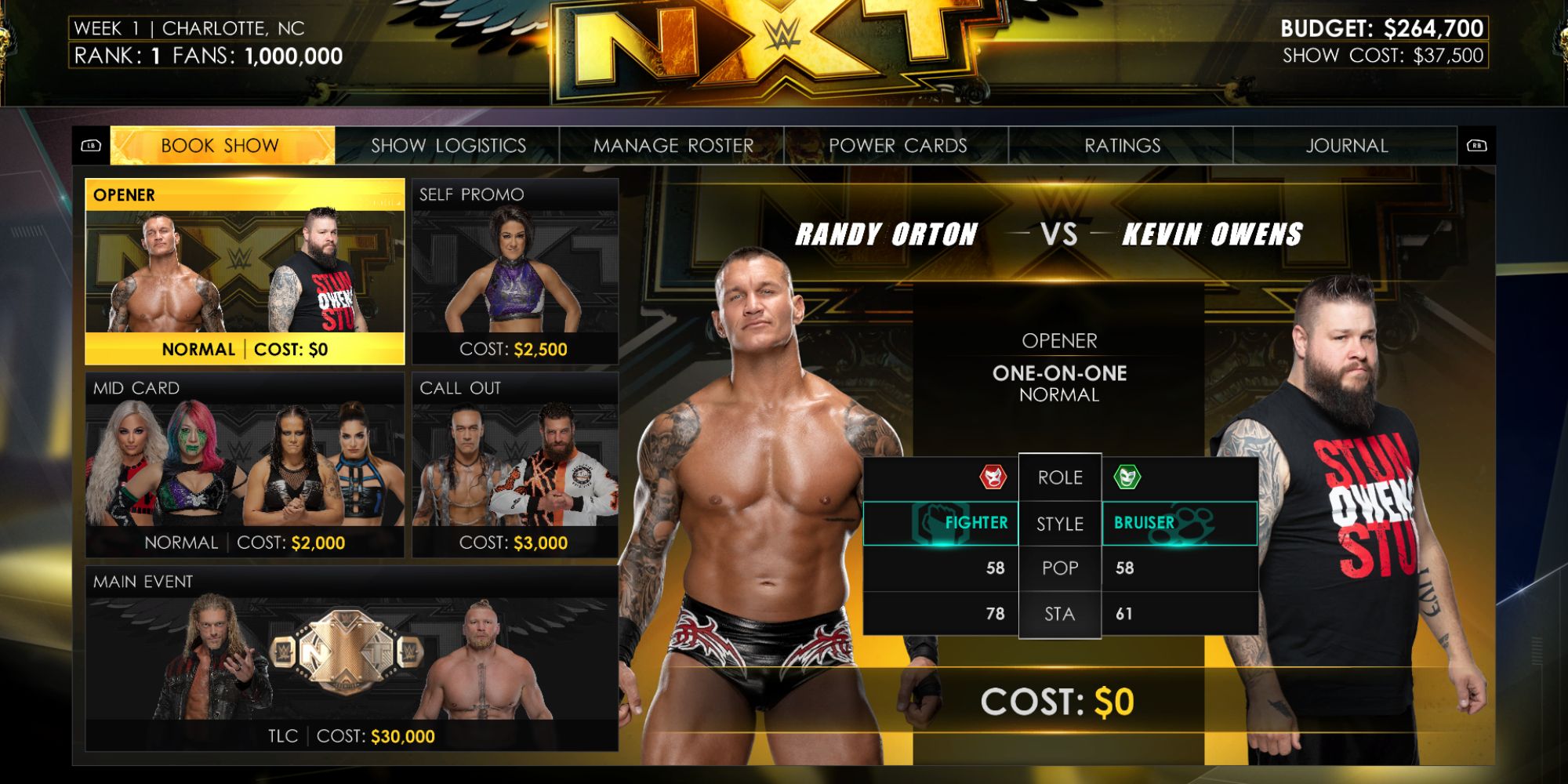 Here are some general tips about what is considered a good show in MyGM: 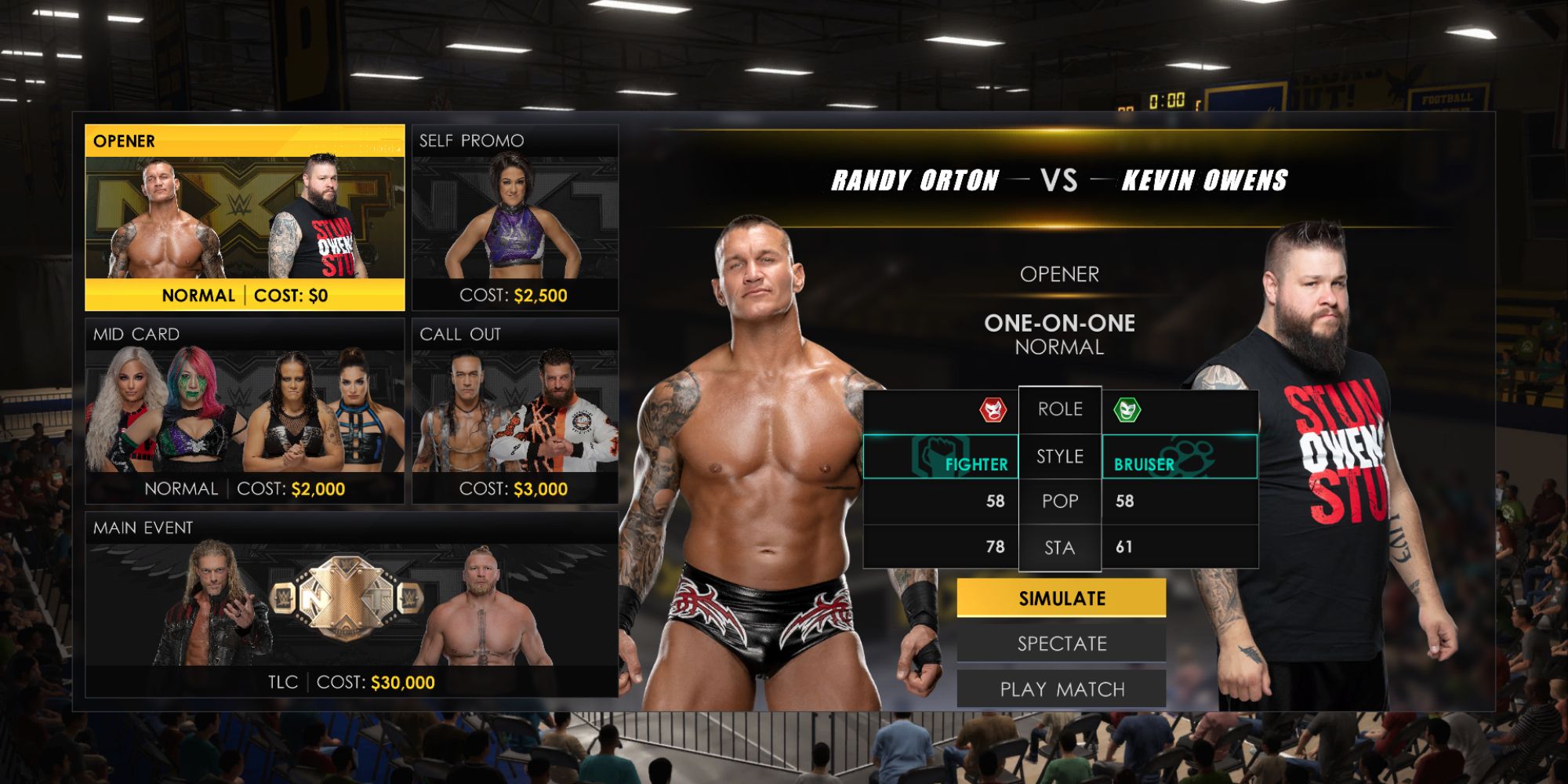 When you've put together the card, you can confirm the booking. After that, it's time to run your show.

For every match, you can either simulate, spectate, or play it – unless there's a run-in, then you can only simulate it. There's also an option to simulate everything, which will immediately take you to the next screen.

The viewers rate each match and promo. It's important to note that playing the contests won't impact their rating. Fans' appreciation of a bout is decided based on popularity, classes, roles, rivalries, stipulation, and whether it's a title match. 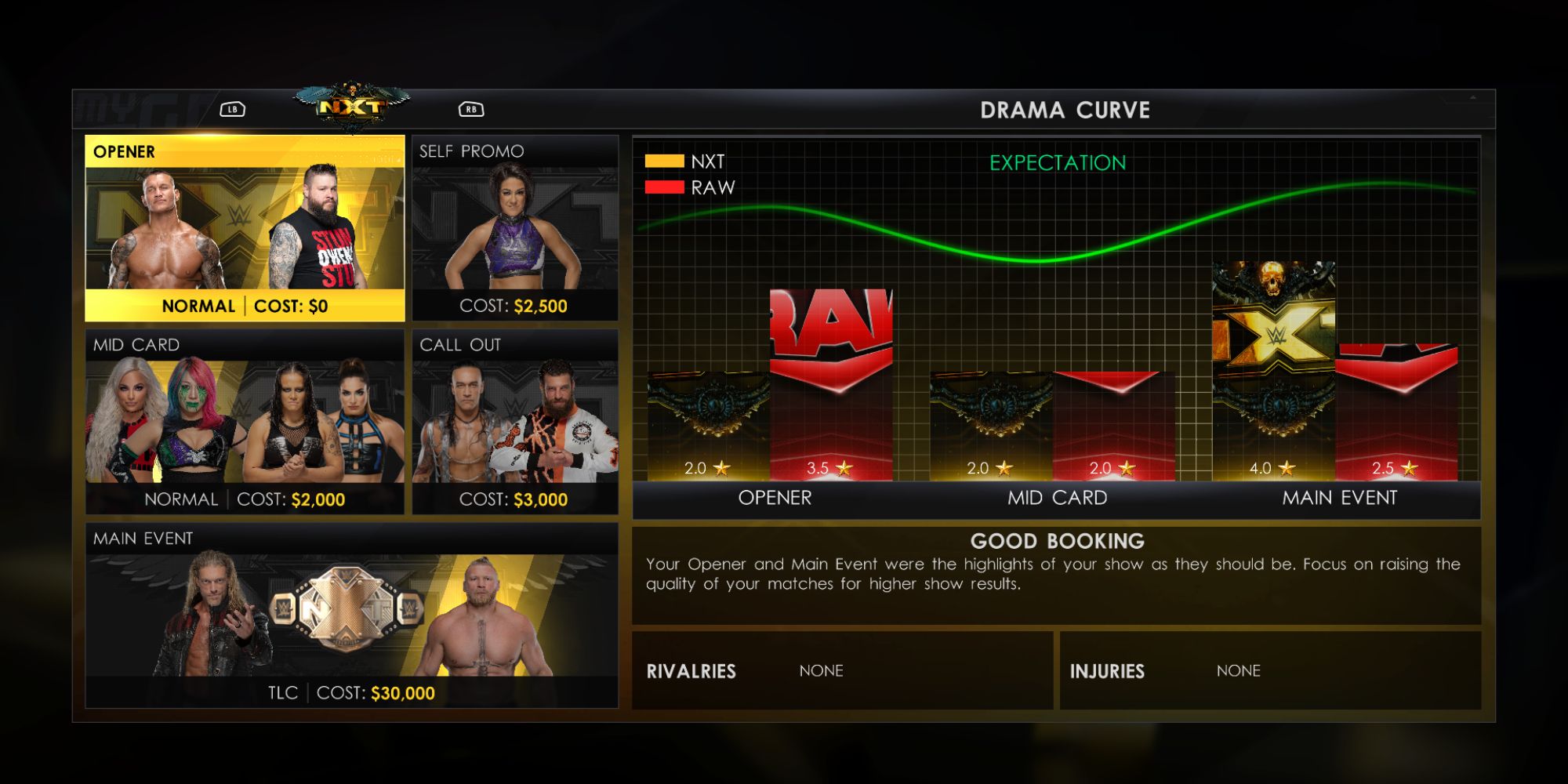 After the show, you will see a graph showing how well your matches did against your opponents. You can also look through your bouts and see if any rivalries started or anyone got injured. If you want a little more detail, you can bring up the match report for each contest. 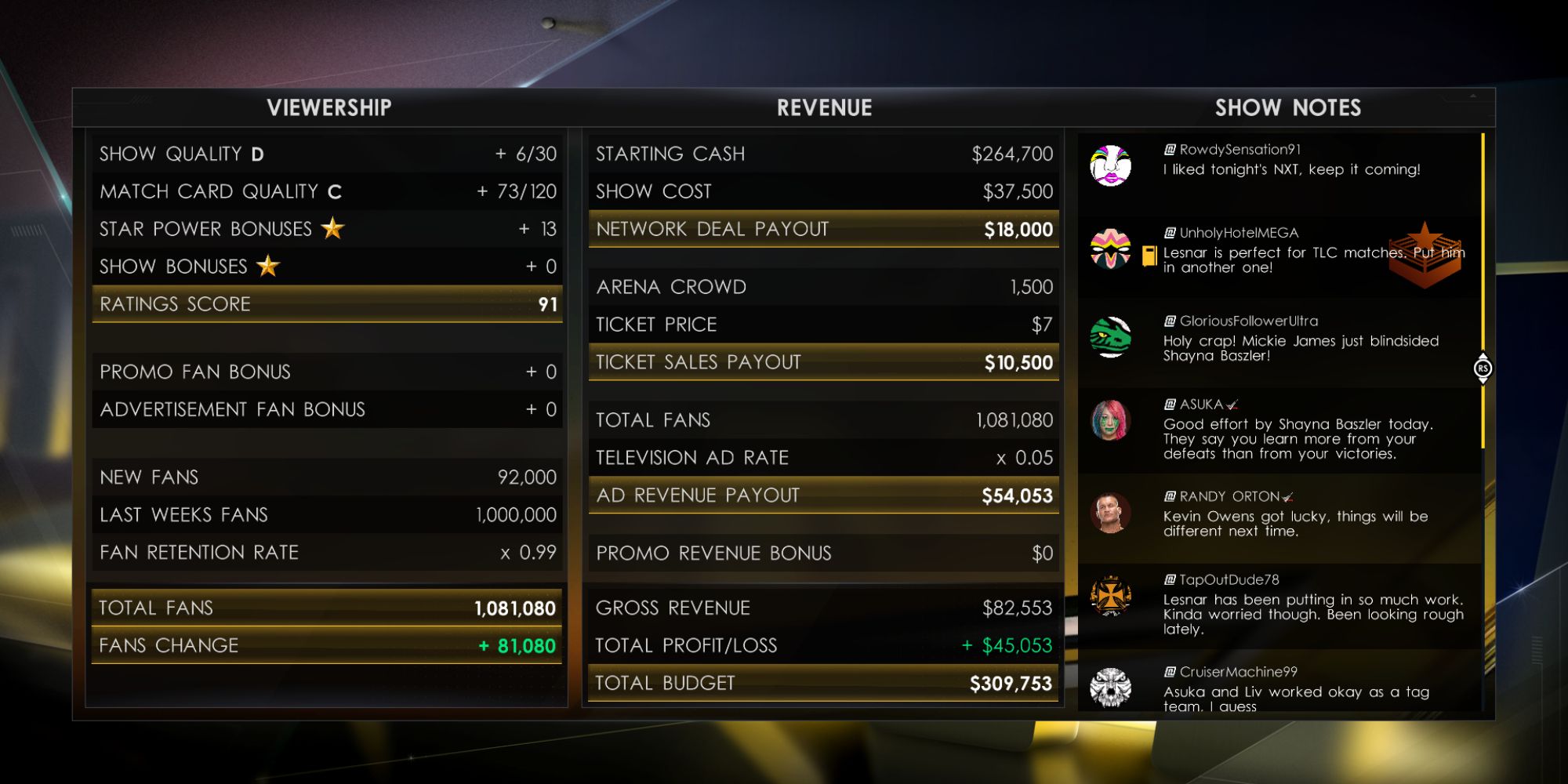 The next screen gives you even more information. It all can be a little overwhelming, but it's just a breakdown of your viewership and revenue. The most important parts are the Fan Change and Total Profit/Loss. Plus, the social media posts on the right can give you a bit of insight into how your fans are feeling about the product.

You then get to see who's currently winning the season. 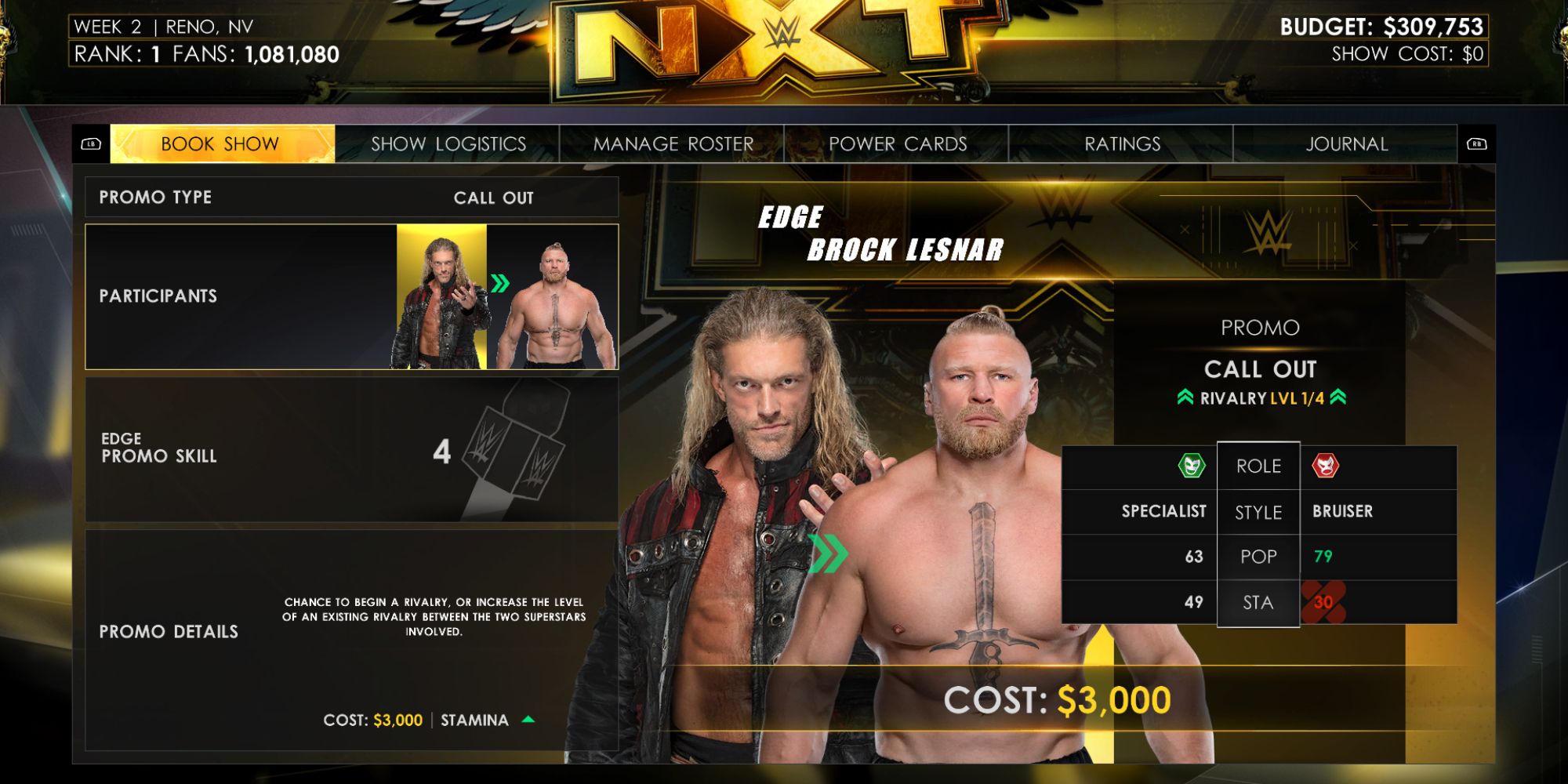 Building exciting rivalries are key to your brand becoming a success, as contests revolving around hot feuds will usually do better than a cold match. There are three ways to start a rivalry.

Once the feud has started, you need to continue doing those three things to build it up. The rivalry is at its peak when it hits level four, but this is also when it's in danger of getting stale. So, when you have a level four feud, make sure you have the competitors face off at a PPV as this will bring the rivalry to a conclusive end and net you a strong star rating.

Another important thing to note is that every wrestler can have two rivalries going on at once, but only if one is a single and the other is a tag team one.

Adding To Your Roster 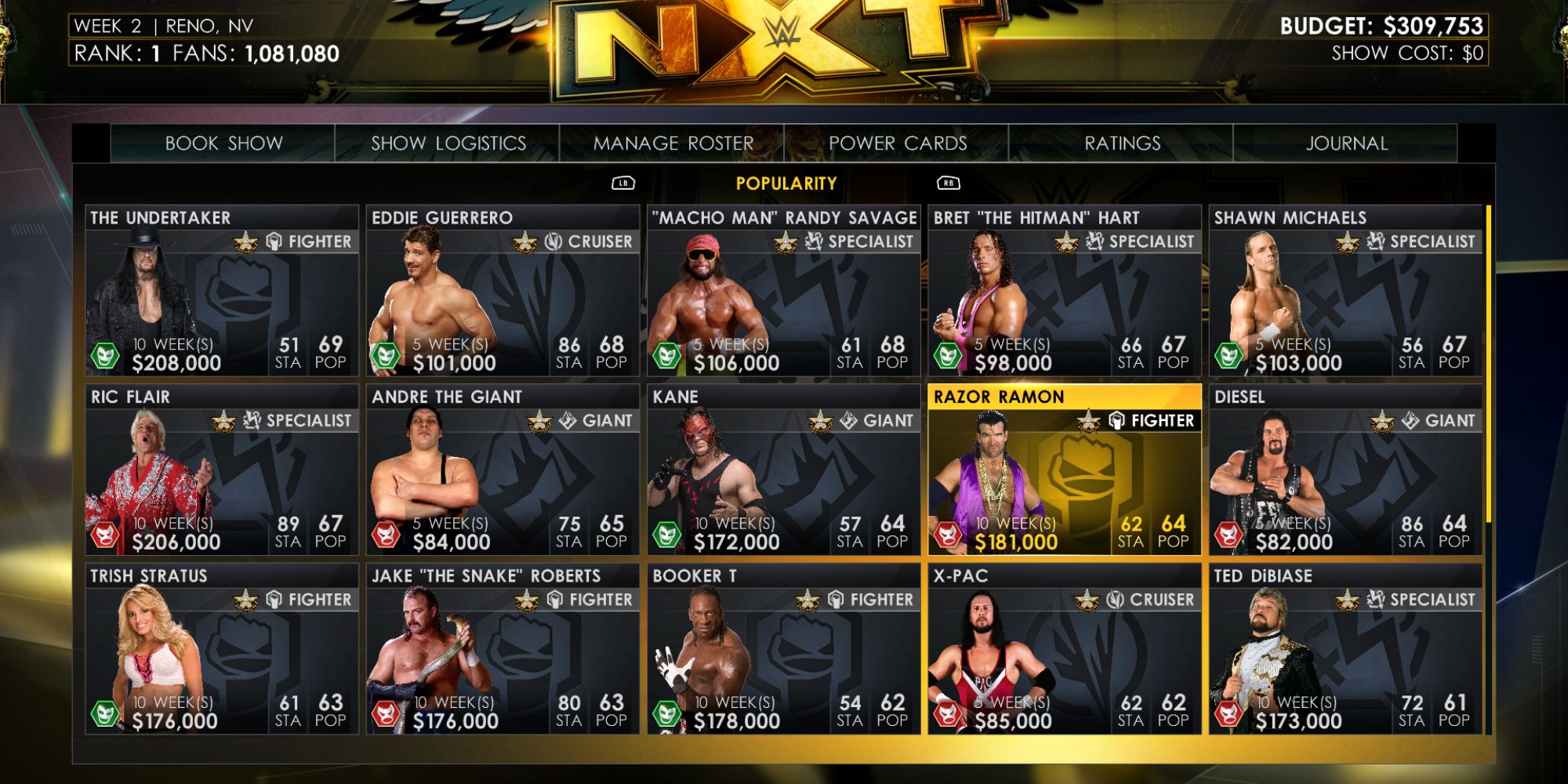 As you get further into the season, you may decide that you need to bulk up your roster. After all, people could get injured, leave the brand due to being unhappy, or maybe you just need some fresh blood. Thankfully, you can sign free agents or legends any time you want from the manage roster tab.

Most of them have short-term deals that could potentially be extended later. But in the free-agent section, there are sometimes wrestlers that you can pick up permanently.

If there's not anyone who suits your roster the first time you take a look, wait until next week as the collection regularly gets refreshed.

Naturally, the legends are usually more expensive than the free agents. Yet, they come with plenty of star power, so they'll bring many eyes to your show.