Wytchwood is a vibrant and lush adventure crafting game starring a kind-hearted witch who simply wants to rest at her home swamp hut. However, she quickly learns about a pact she made with a black goat. In order for her to have her respite, she will have to venture out into the surrounding regions and find twelve souls to bring to the goat.

Wytchwood is made up of crafting gameplay, tons of exploration, quest solving, and much more along your lengthy adventure. The bulk of crafting in this game comes from finding materials and ingredients, combining them, and creating specific spells and reagents in order to progress. Here are some of the very best spells and reagents to craft early on in the game. 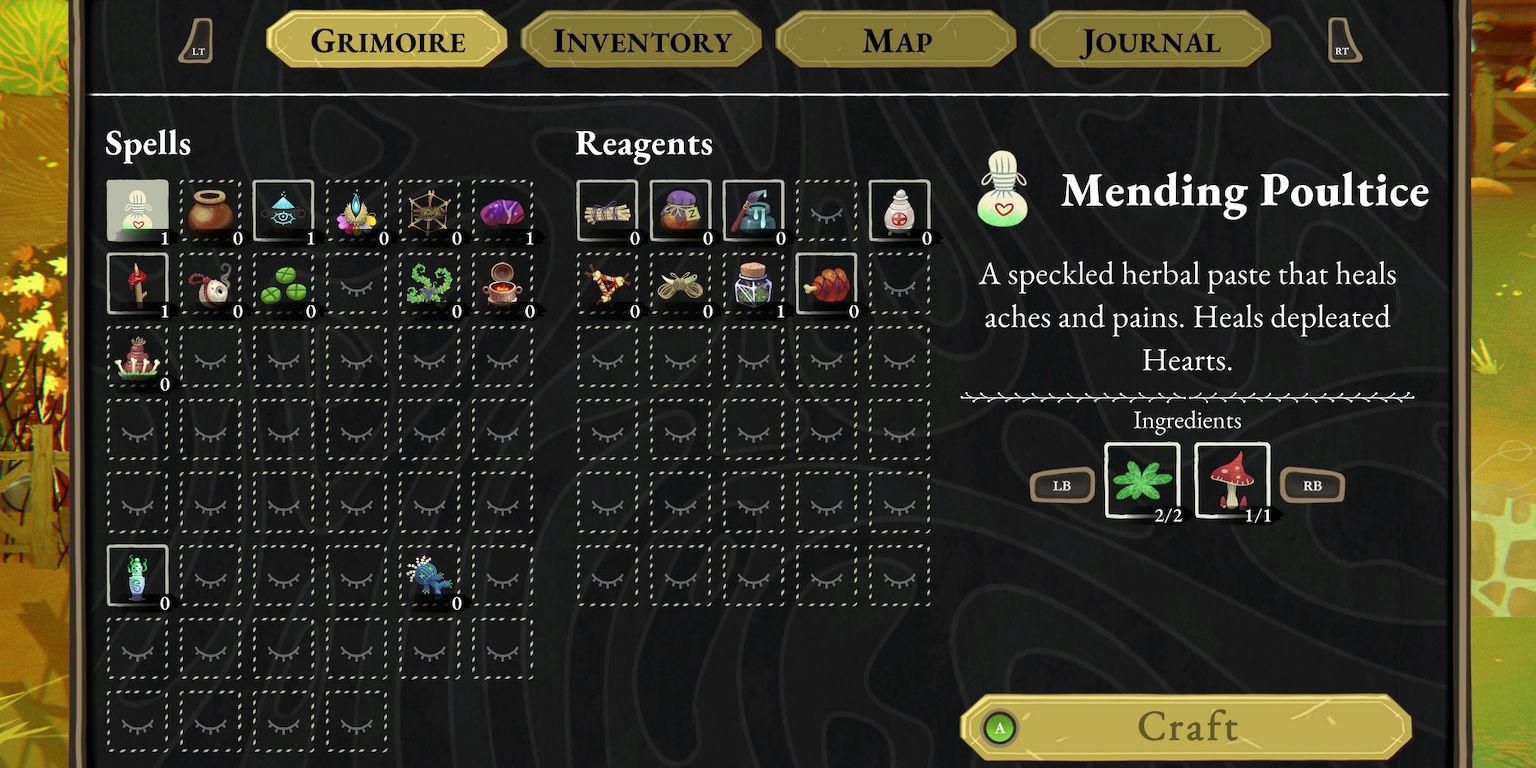 For all intents and purposes, the mending poultice is a humble healing potion. Despite Wytchwood not having any traditional combat or battle mechanics, you are still able to take damage in this game.

The mending poultice only requires two items to craft, namely, a healing leaf and a red mushroom. These items are in heavy abundance all throughout the swamp and forest areas. Keep a few on hand just in case you lost a heart of health. 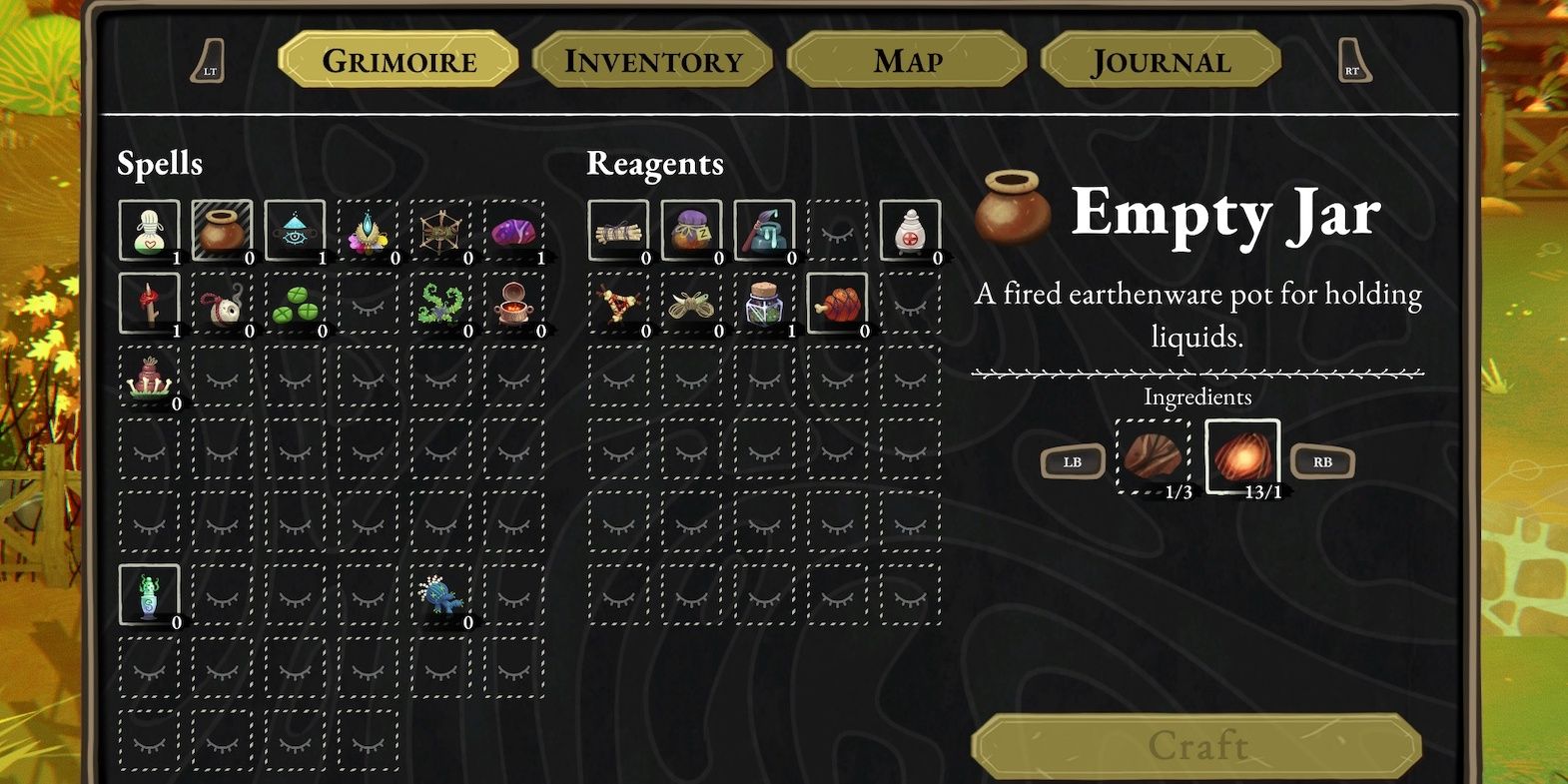 While it might sound silly to focus on crafting an empty jar in a witchy game all about hexes, potions, and the like, the simple jar is going to be extremely useful to you. Besides, how do you expect to hold all of your liquid items?

Yes, the empty jar is easily one of the best items to craft very early on in your adventure. This crafting spell only requires clay and ember, both of which are very easy to find. Stock up on empty jars so you are ready for the more complicated reagents. 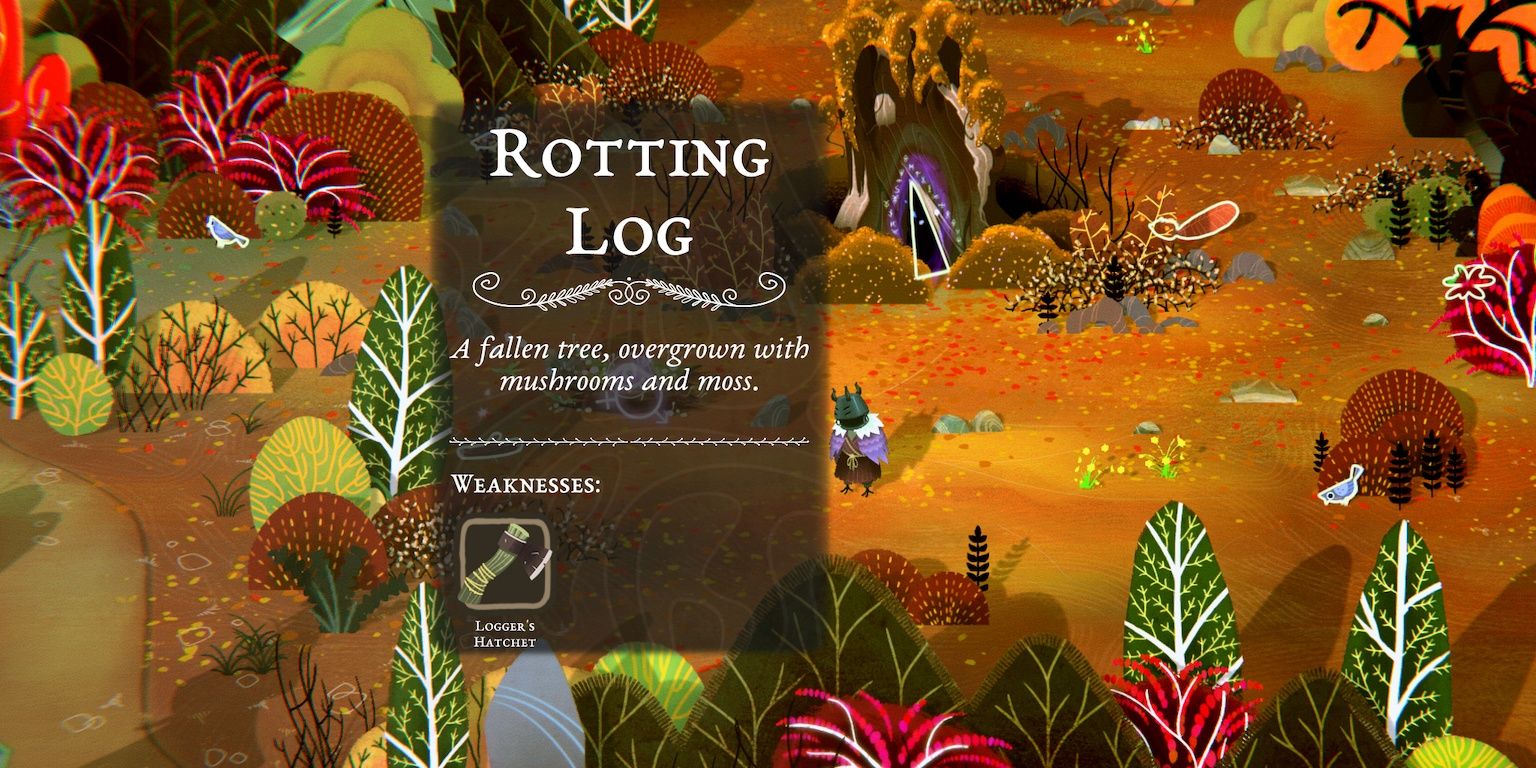 Unveiling power in Wytchwood is very useful when it comes to discerning what a specific, mysterious item or location is. You will often stumble across landmarks, totems, obelisks, doorways, and the like, unable to move forward until unveiling powder is used.

Fortunately, you learn about this spell very early on in the game since you need it to access the overgrown tomb in your swamp home area. Be sure to have a couple of these spells handy so you don't get stuck during a quest. 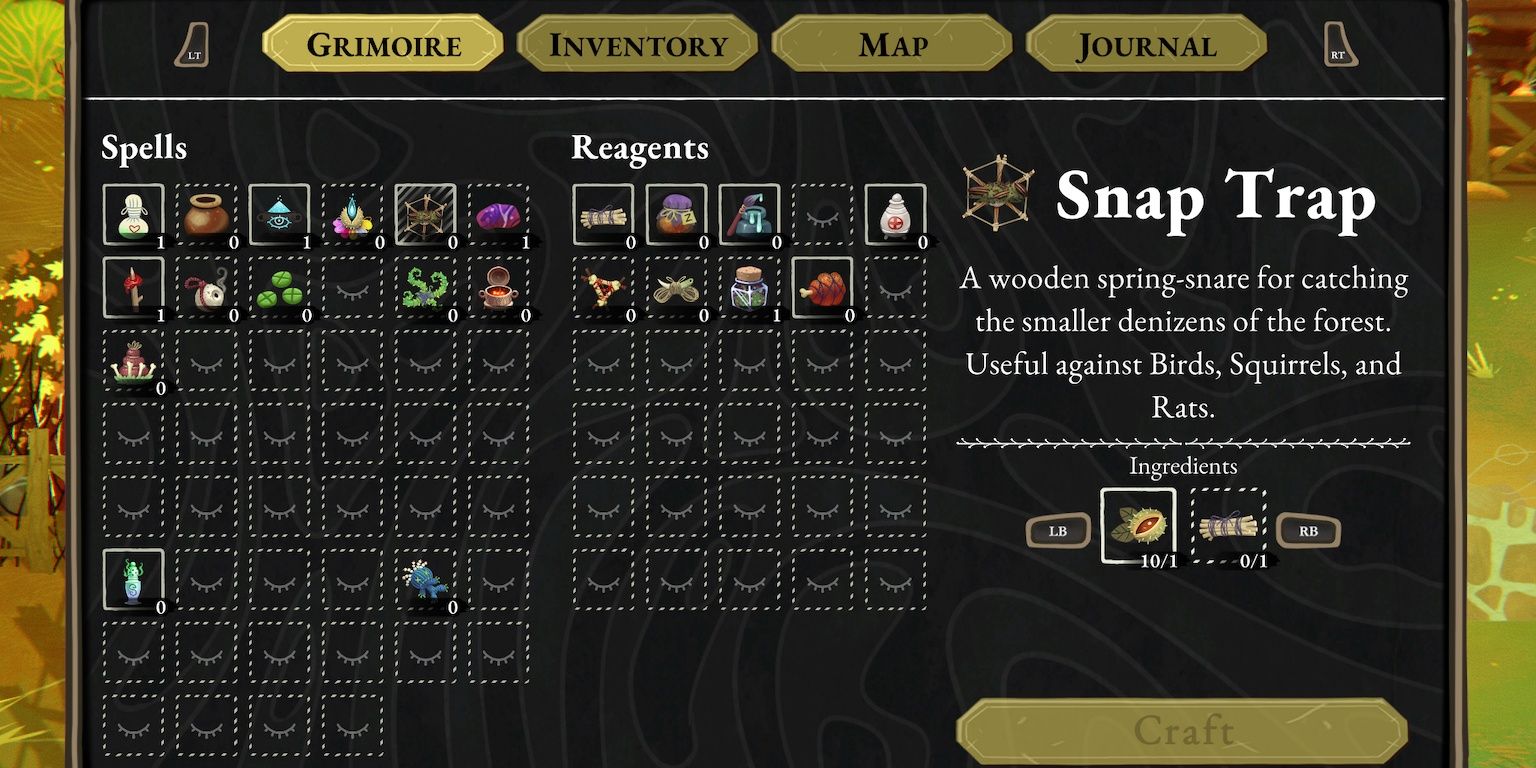 The snap trap spell in Wytchwood is quite self-explanatory in that it is a simple trap that snaps and captures a critter such as a rodent or bird. This trap only requires a specific nut and some sticks but is very efficient early on in the game when you need meat or feathers.

Most early game zones have plentiful small critters so be sure to keep a few of these in your toolbar. To set the trap, simply hold down the action button to set it on the ground. Any critters or birds around will head right towards it. 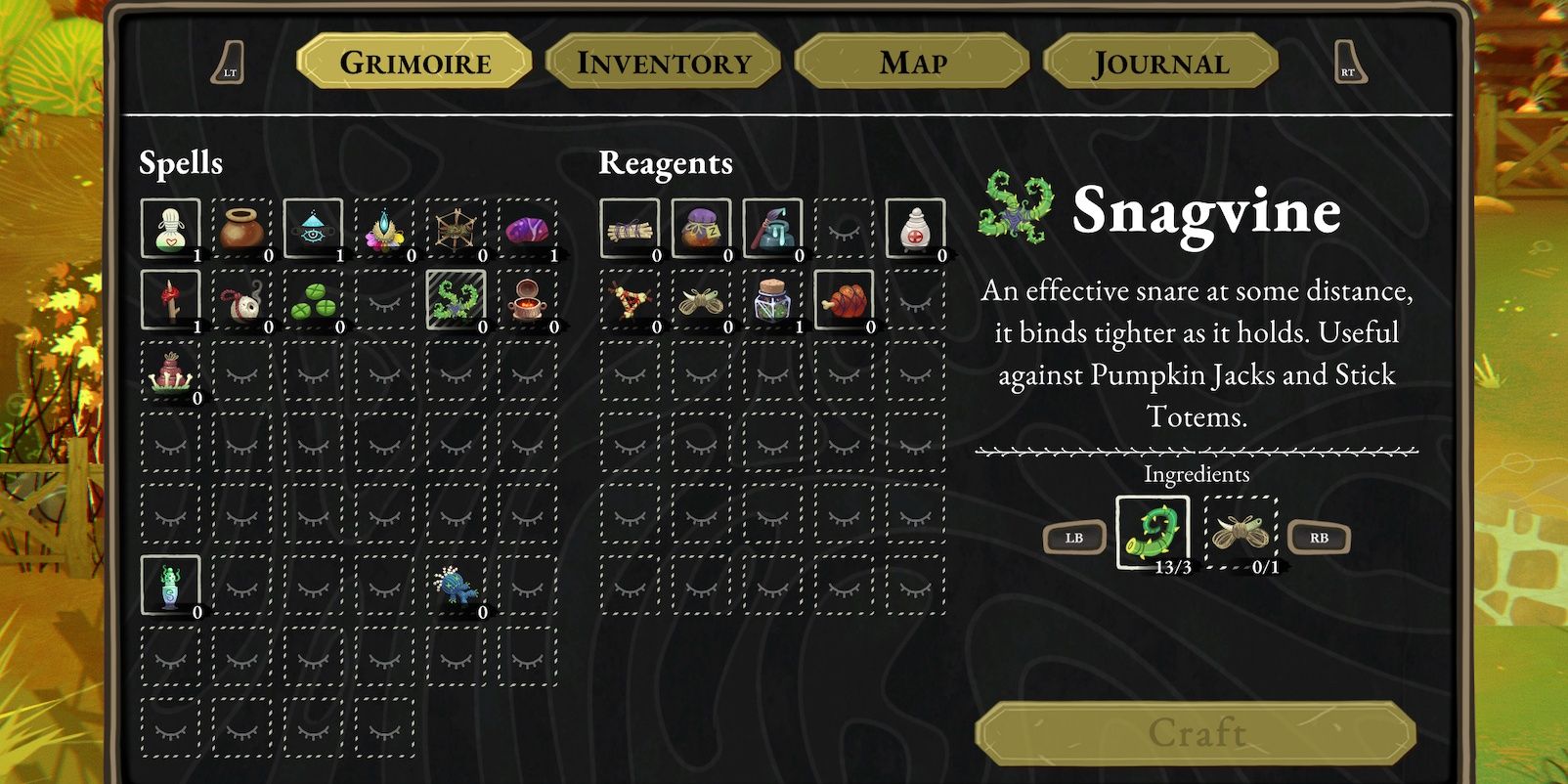 Snagvines are simply that, vines that snag creatures so that you can then knock them out or chop them with your sturdy ax. Snagvines are incredibly useful when exploring the swamp area, one of the first locations in the game.

Two creatures that you encounter early in the game are pumpkin jacks and stick totems. Both of these creatures can do a lot of damage to you if you aren't careful. The snagvine will trap them so that you can defeat them quickly to gain their special ingredients. 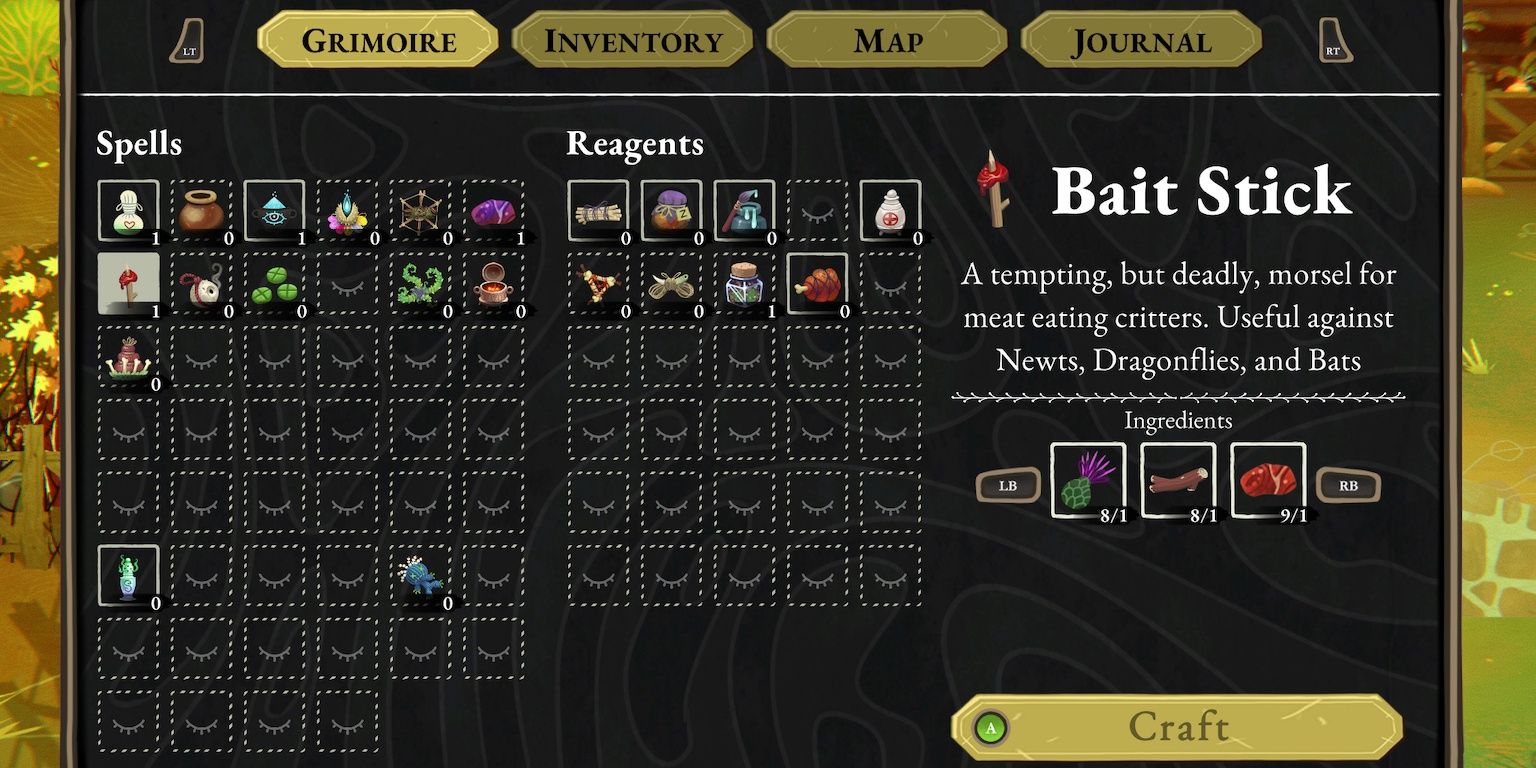 The humble bait stick might be one of the most basic spells in the game, aside from the empty jars. Bait sticks are simply made out of pieces of meat on a stick, that's it. Despite their simplicity, you will find yourself using these all of the time, especially in the swamp area.

Bait sticks are necessary for capturing and defeating most flying bug creatures in the game. The materials they leave behind are often blood, wings, or some sort of gross goo. Have a few of these in your inventory just to be safe. 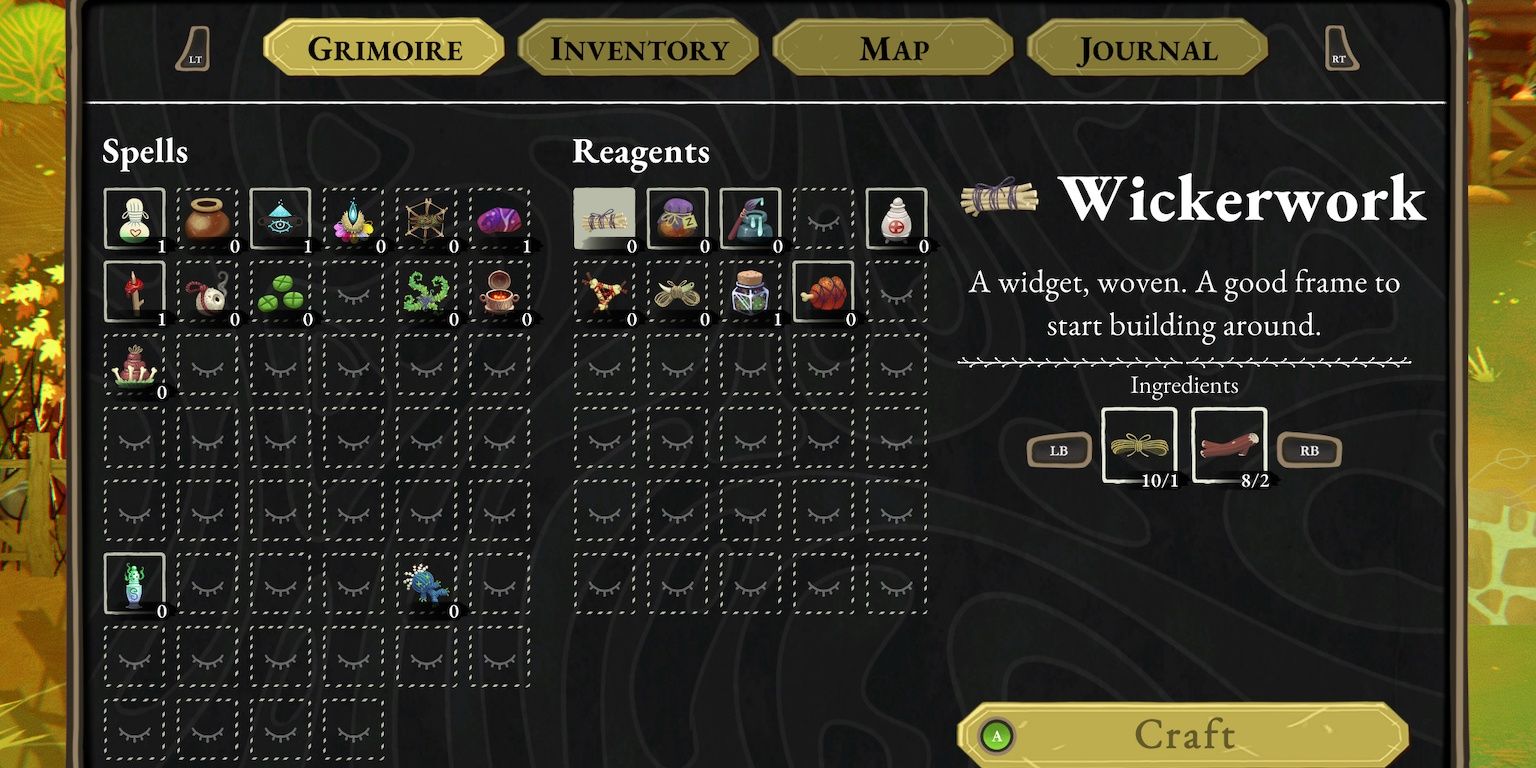 One of the best reagents to focus on crafting in the early parts of the game is the wickerwork. This reagent is quite simple and consists of a sewing kit and a basic stick, both of which are easy to find and make.

Wickerwork is an essential base component for many of the more complicated reagents and spells. While it might not look like much, it's highly important in the more complex quests. 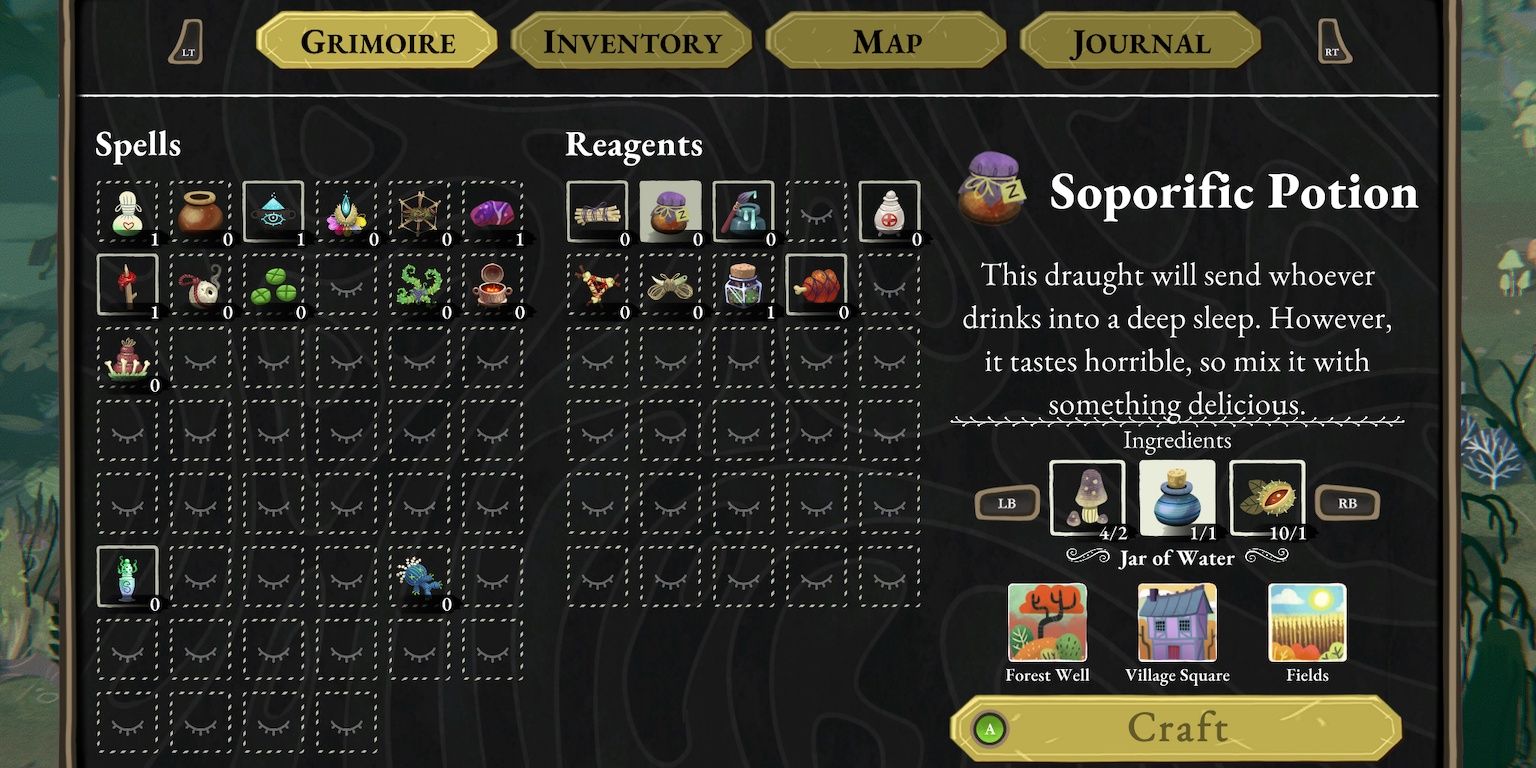 A soporific potion is simply a fancy and complicated name for a sleeping potion. These potions are highly useful when exploring the forest and fields with the former being the first place you use it. Often this potion is needed to lull a beast to sleep so that you can snag some of its hair or fur.

The soporific potion is one of the first more complicated reagents that requires multiple steps. You need a special type of nut found in the forest, some special water found in a well, and some gray forest mushrooms. It's not a bad idea to have one or two of these potions in your inventory as a backup. 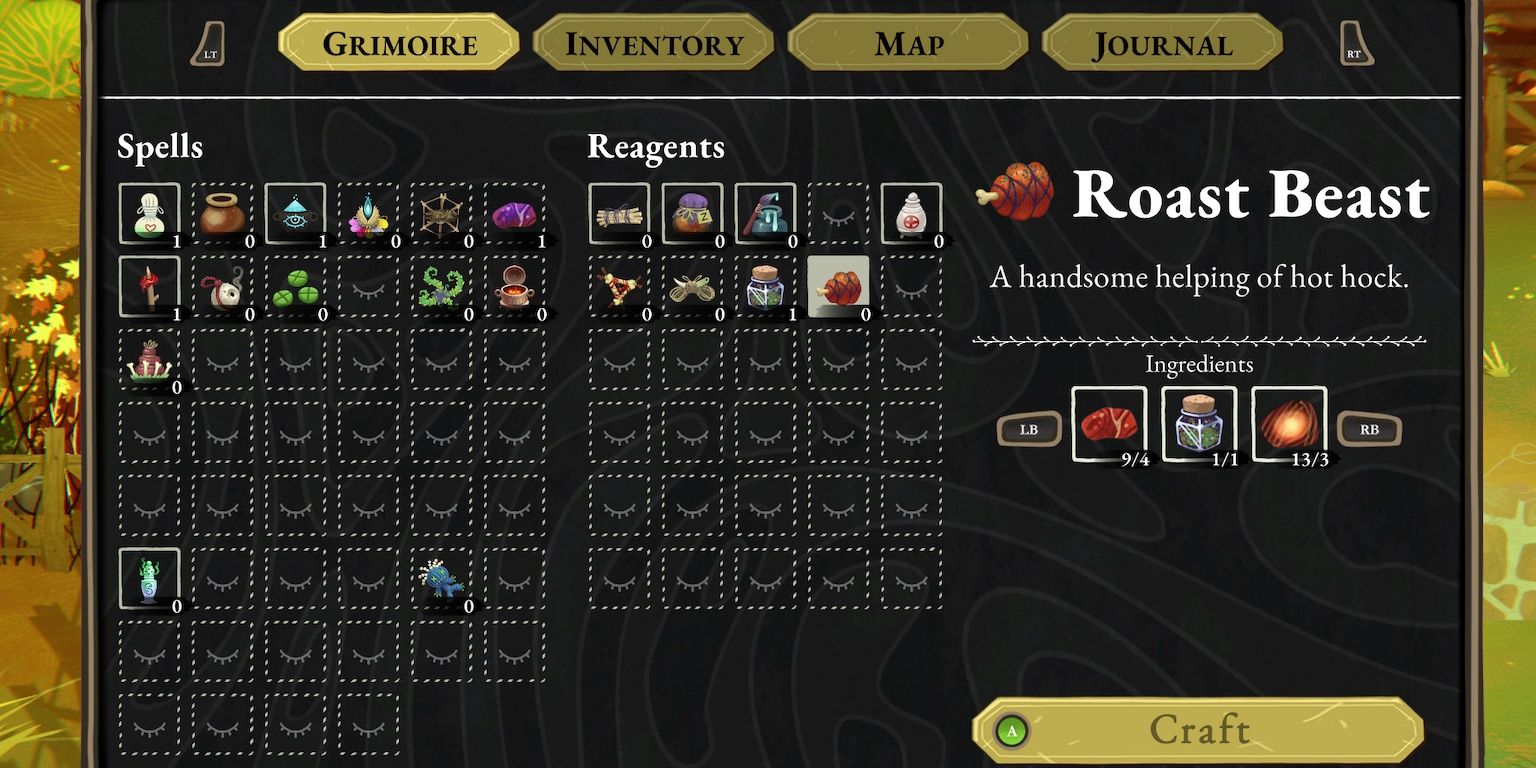 Roast beast is exactly what it sounds like, a chunk of beast meat that has been roasted to perfection. While the bait stick spell is useful on small bugs and flying creatures, the roast beast is necessary for the larger monsters in the game.

You can craft this reagent with a piece of basic meat, some special potion sauce, and some hot embers from a dying fire. Once you throw those ingredients together you are then ready to bait and lure a monster. 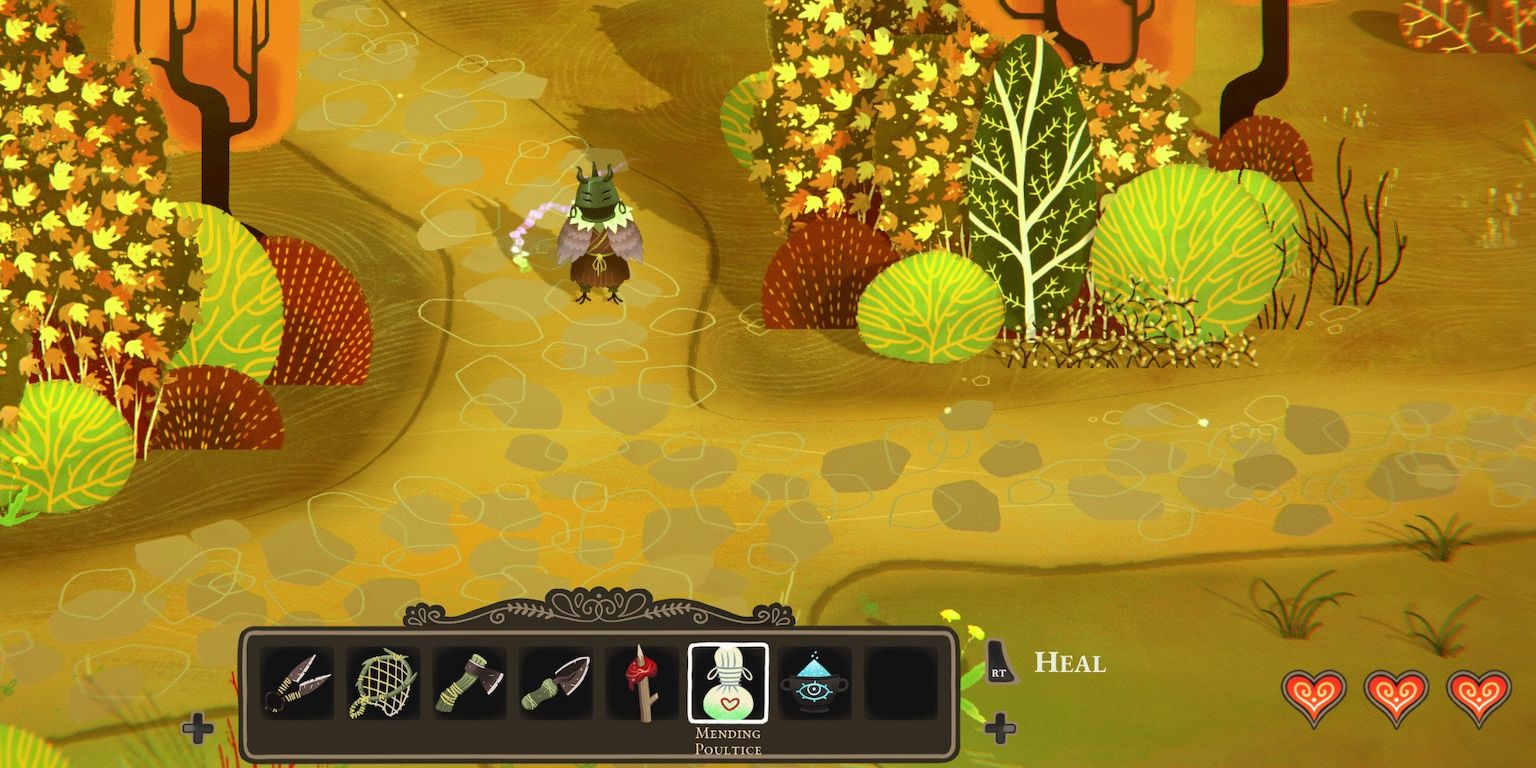 The sewing kit, much like the empty jar spell or the wickerwork reagent, is essential to have in your inventory. You very quickly learn about this rudimentary reagent at the start of the game since you will be using one of these often.

A sewing kit is typically required for hexes, totems, and trap-type devices. You can find its ingredients readily around the majority of the explorable zones so be sure to stock up on them from the get-go.

Related posts:
12/10/2021 News Comments Off on Wytchwood: 10 Best Spells And Reagents To Craft First
Hot News
Log4j lesson: Cybersecurity defense isn’t just about tech
Uncharted: The Lost Legacy Trophy Guide
Pokemon Legends: Arceus Is Already Being Streamed Ahead Of Launch
No More Cheating On The Go As Steam Deck To Support Easy Anti-Cheat Games
How To Get The Firebird Mount In Final Fantasy XIV
Recent Posts