Aside from huge areas to explore, in-depth battle systems, and compelling characters, the Xenoblade series is known for having some truly unique weapons. The first game gave us the Monado, a powerful red laser sword once wielded by a massive Titan, and ever since then, each new game has added more and more weapons to your arsenal.

Xenoblade Chronicles 3 is no different, as the main cast alone has some of the coolest and most creative weapons the series has seen yet. Some are modified versions of old weapons, others are completely original, and all of them are great at kicking enemy butt. 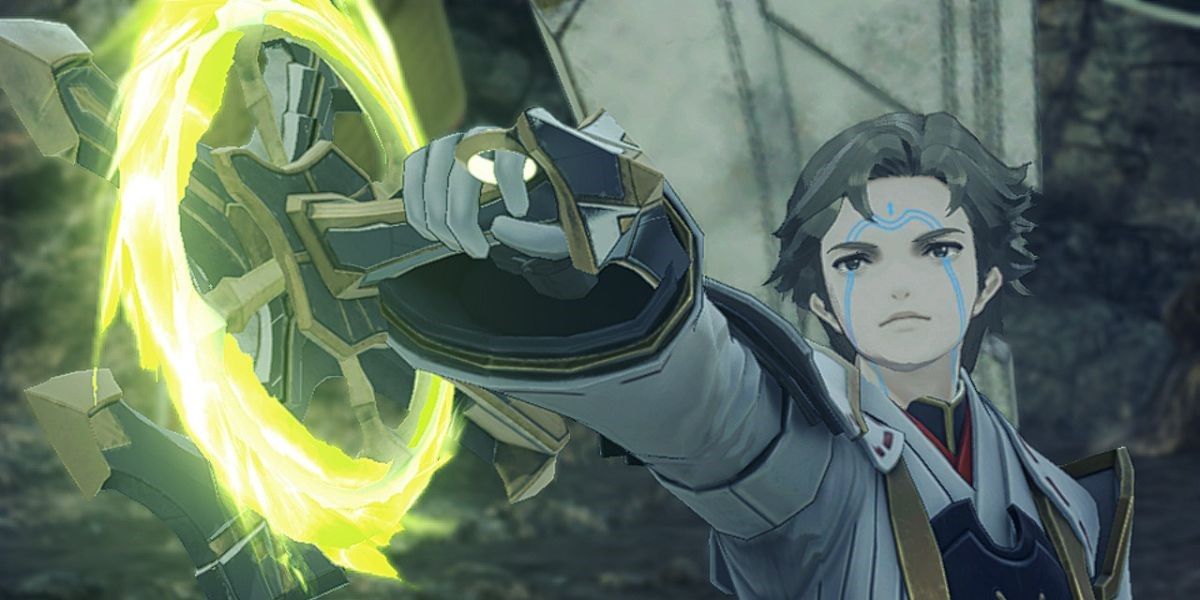 The Disc Launcher, signature weapon of the Strategos Class, is known for, well, launching discs. More specifically, razor-sharp glowing green rings of energy. Strategos is primarily a Healer Class, and as such, the Disc Launcher excels at setting up health-recovery fields and debuffing enemies.

Though not as immediately destructive as they appear at first glance, Disc Launchers can still rack up tons of damage thanks to one of Strategos’ signature Skills, giving you an attack boost for every buff you give your party. Admittedly, Disc Launcher isn’t a very creative name, but it more than makes up for it with sheer versatility. 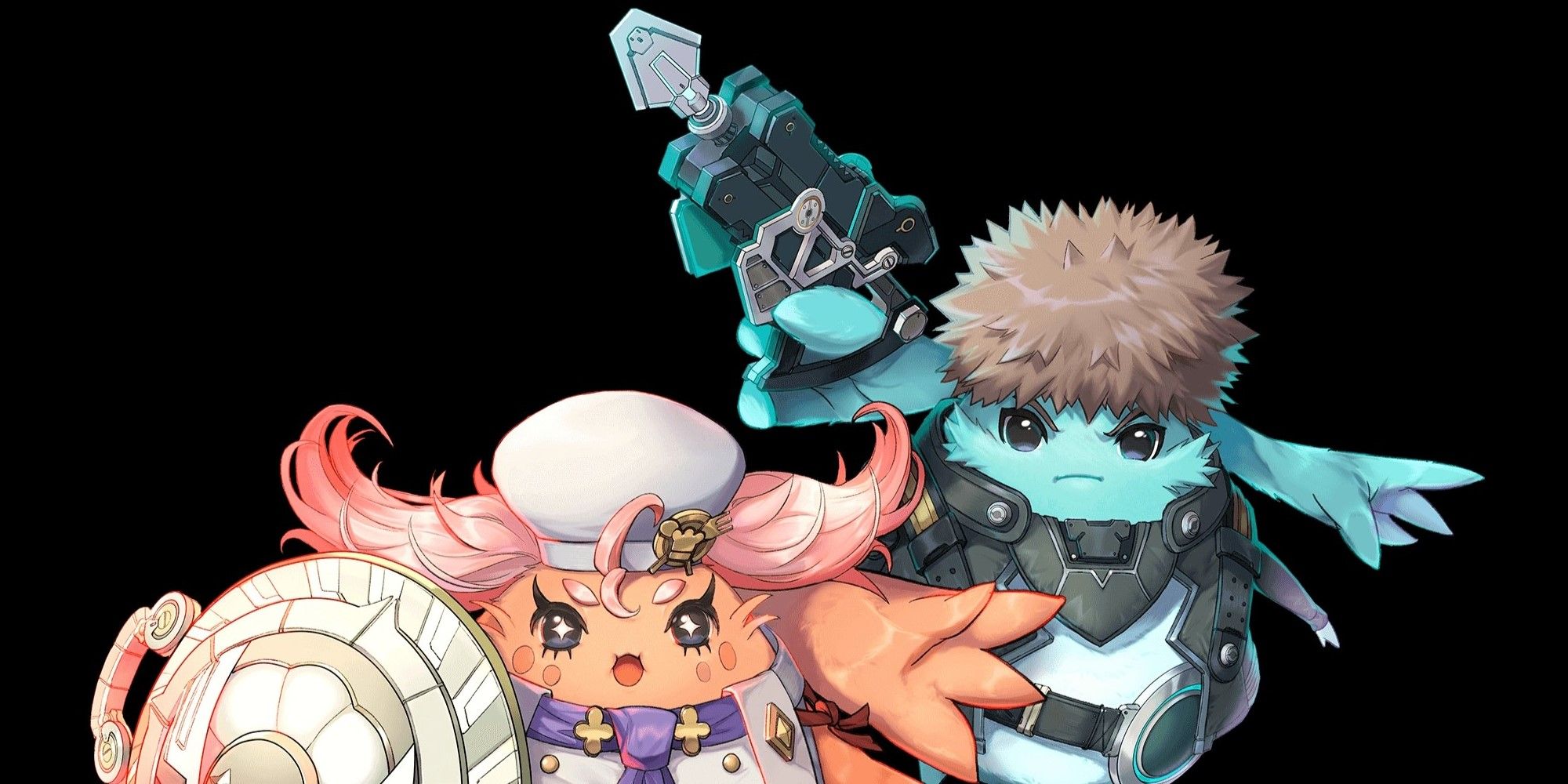 Coming from the Yumsmith Class, Variable Arms are special for a number of reasons. Not only are they the signature weapons of the 2-in-1 Nopon duo, Riku and Manana, but they were never really intended to be weapons in the first place. Variable Arms consists of Manana’s heavy-duty cooking pot lid and Riku’s high-tech screwdriver turned gun-sword.

Like the lovable pair themselves, these two tools may initially seem like an odd combination to bring into battle, but despite all odds, they excel. With access to flaming soup grenades and one of the quickest recharge times on a Break Art in the entire game, monsters will think twice before underestimating the Nopon. 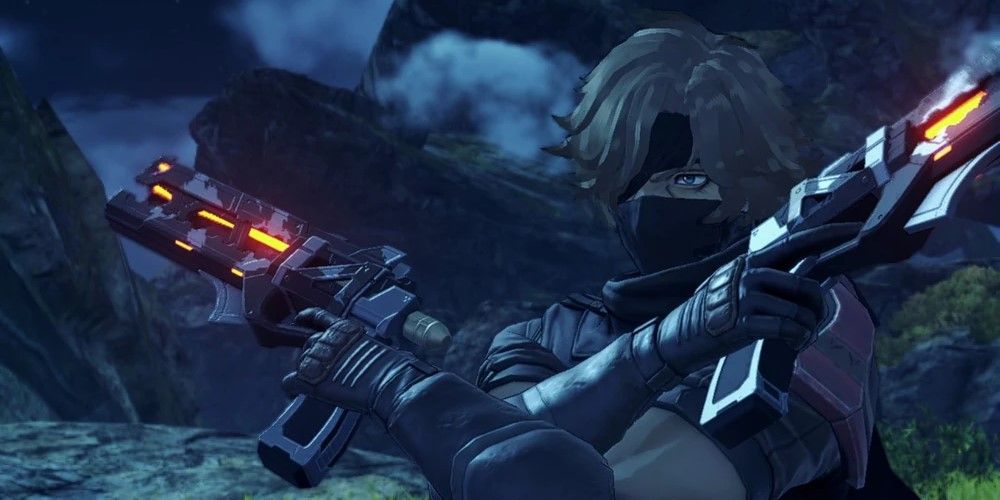 Full Metal Jaguar might just win the award for coolest playable Class in the entire game, due in part to its weapons of choice. Full Metal Jaguar gets two standard hand pistols which, while well-designed, are just the tip of the iceberg. The real fun comes when you use any Art that relies on the Gun Drones: hovering laser cannons that remain hidden by your side until it’s time to strike.

The huge beams they fire last a long time and cover a huge distance, giving Full Metal Jaguar not only one of the longest ranges in the game, but also the most potent area-of-effect damage, allowing you to mow down hordes of foes far more easily than most. 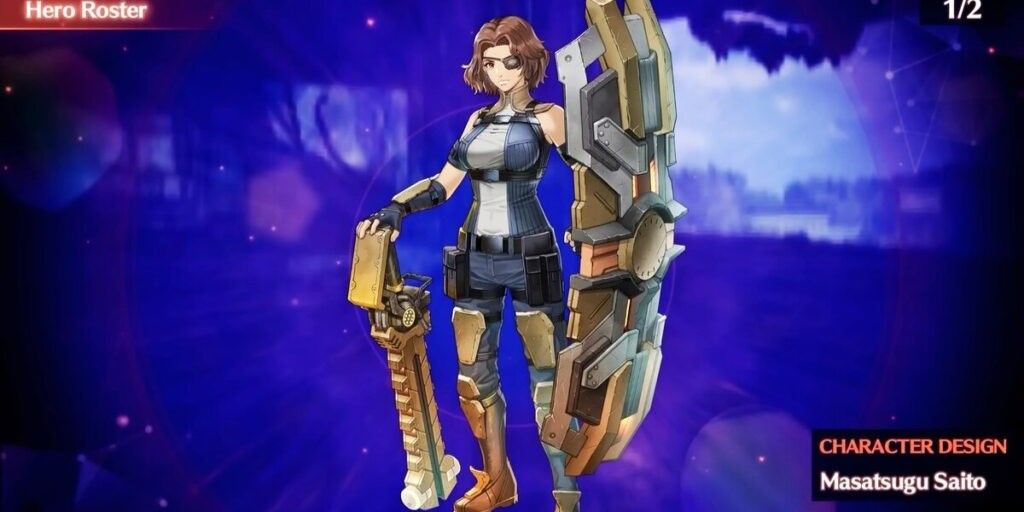 Sometimes, you just want to hit things with a giant metal stick. That, and soaking up hits for your teammates, is what the Lost Vanguard is all about. Equipped with a tall shield and a bulky iron mace, this Class is a commanding presence on the battlefield.

But enough about Lost Vanguard’s tanking abilities; let’s focus on that mace for a moment, because it has a few tricks up its sleeve.

The Defense Mace becomes electrified during certain attacks, most notably the Class’s signature Talent Art, Thunder Steel. This move deals a lot of damage in a single hit, especially to mechanical enemies, and inflicts the Bind status, leaving it wide open for the rest of your party to wail on it.

6 Martial Linkstaff (Thaumaturge): For the Martial Arts Movie Fan in all of us 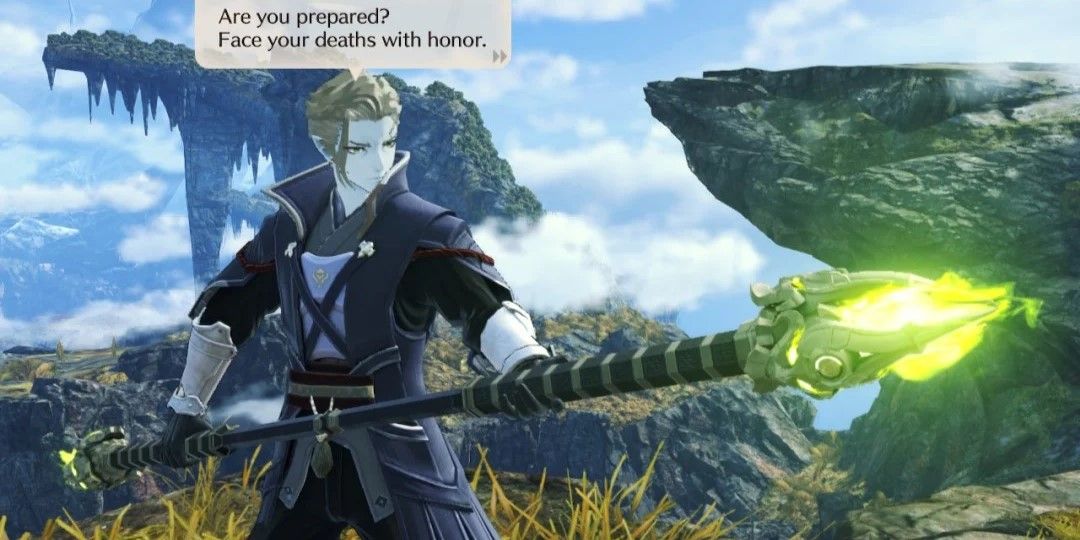 Have you ever thought to yourself “what if you combined a quarterstaff with a pair of nunchucks”? The answer, as it turns out, is the Martial Linkstaff, signature weapon of the Thaumaturge Class. This handy staff courses with energy through its flexible plasma-like core, which allows the top and bottom halves to separate at a moment’s notice.

In staff form, the Martial Linkstaff heals itself and allies, and can offer a few helpful buffs to the party. Meanwhile, the attacks that use its nunchuck form deal powerful defense-piercing damage. Balancing offense with team support is the key to using this weapon effectively. 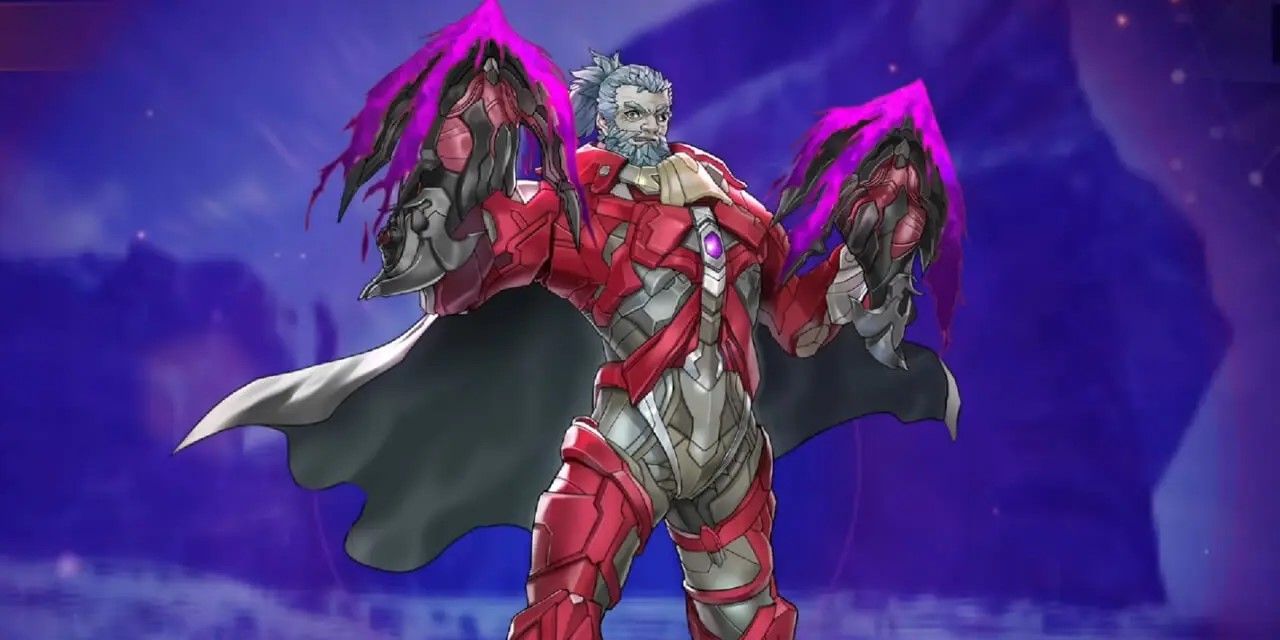 The Xenoblade series has had its fair share of gauntlet-like weapons (the Knuckle Claws from 2 being a prime example) but they all pale in comparison to the Soulhacker Class’s Mimic Knuckles. If the giant shadowy crosses on the front of the gauntlets somehow aren't enough, the Mimic Knuckles are also the only weapons in the game to come straight from a Moebius, the main villains of Xenoblade Chronicles 3.

The Mimic Knuckles get their name by being able to mimic the attacks and abilities of foes you’ve previously defeated. Because of this innate power, Soulhacker is a bit of an odd Class. It can be fully customized to fulfill just about any role you’d want in a party, but is only as strong as the number of Unique Monsters you’ve fought on your journey so far.

4 Shieldblade (Heavy Guard): A JRPG Staple, With a Twist 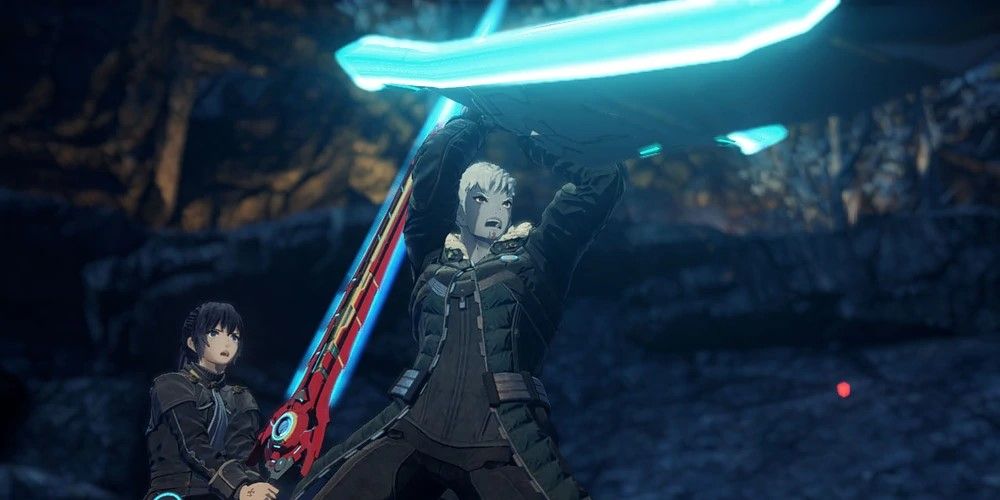 Giant swords and JRPGs have gone hand in hand ever since 1997, when Cloud Strife and his iconic Buster Sword made their debut in Final Fantasy 7. The Xenoblade series is clearly a big fan of the trope, as almost every entry has included an oversized weapon of some kind. In 3, that weapon is the Shieldblade.

Wielded by the Heavy Guard Class (Lanz’s default Class), the Shieldblade turns the giant sword trope on its head, focusing on defense more than offense. It projects a powerful barrier around it, protecting your nearby party members from attacks. If enemies are particularly aggressive, you can even stab the Shieldblade into the ground, turning it into a deadly, shielded, machine gun turret. 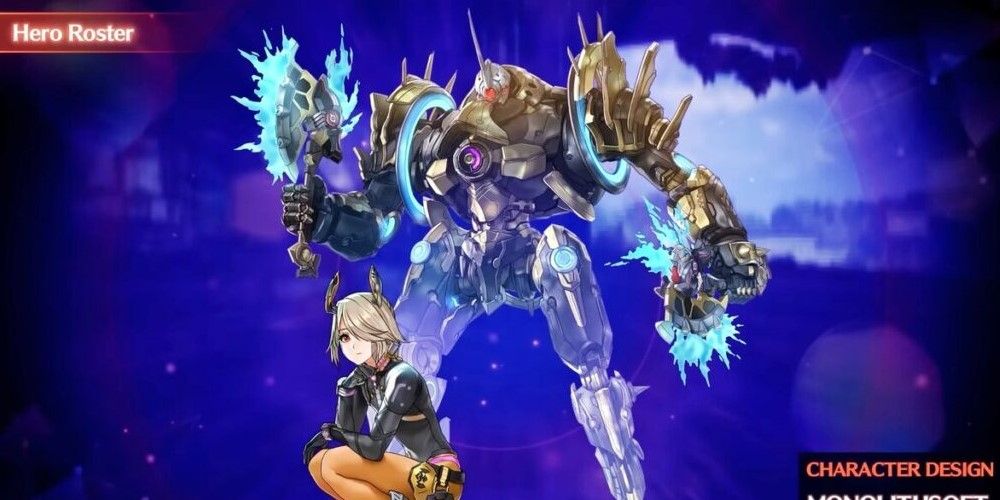 Coming from the late-game Class of Machine Assassin, the Doom Axes might just be one of the scariest weapons in the game. If the blue, glowing blades of the axes don’t kill your enemies, then the poison, bleed, burn, or other debilitating debuffs they leave behind certainly will.

The blades of the Doom Axes may appear to be regular energy-based cutting edges, they’re actually made of an extremely hazardous waste energy left behind by the mysterious Machine Assassins that this Class gets its name from. While more powerful enemies may be able to resist your debuffs, a persistent Machine Assassin’s Doom Axes will strike true sooner or later. It’s just a matter of time until your enemies fall to their knees. 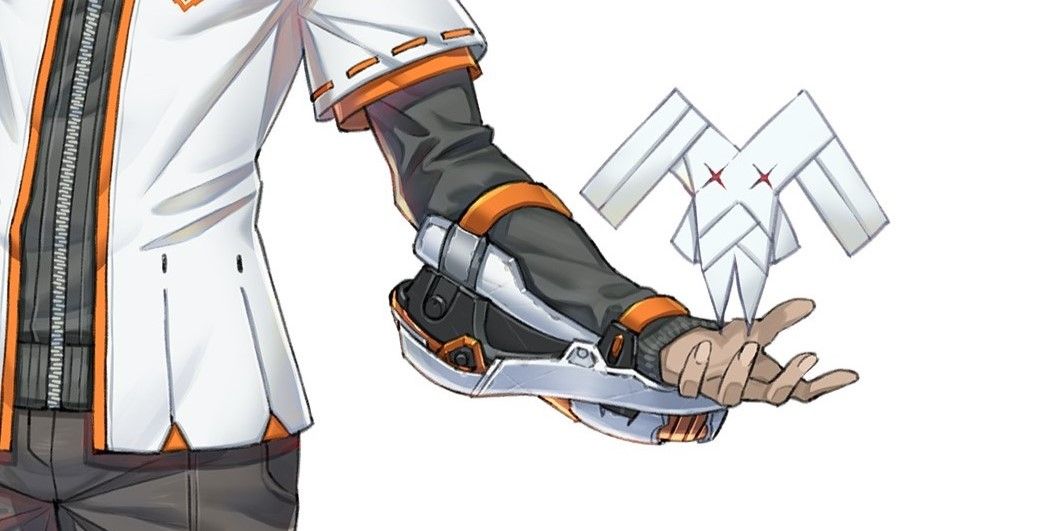 Easily the most eye-catching of the main party’s starting weapons, Spell Tags, or Mondo, as Taion affectionately calls them, are tiny paper-like drones controlled by a device on your arm. Alone, a single Mondo is capable of infiltration and surveillance, but when they come together, almost anything is possible.

They can swarm targets in a matter of seconds, making it harder for them to dodge attacks. Conversely, they can swarm around allies to protect them from otherwise deadly blows. Mondo can even fuse together into more powerful shapes, such as a falcon, if they need to do big damage. Their only limit is how well you can control them while in the Tactician Class.

1 Heatshimmer Spear (Seraph): A Spear that Burns Everything, Including its Wielder 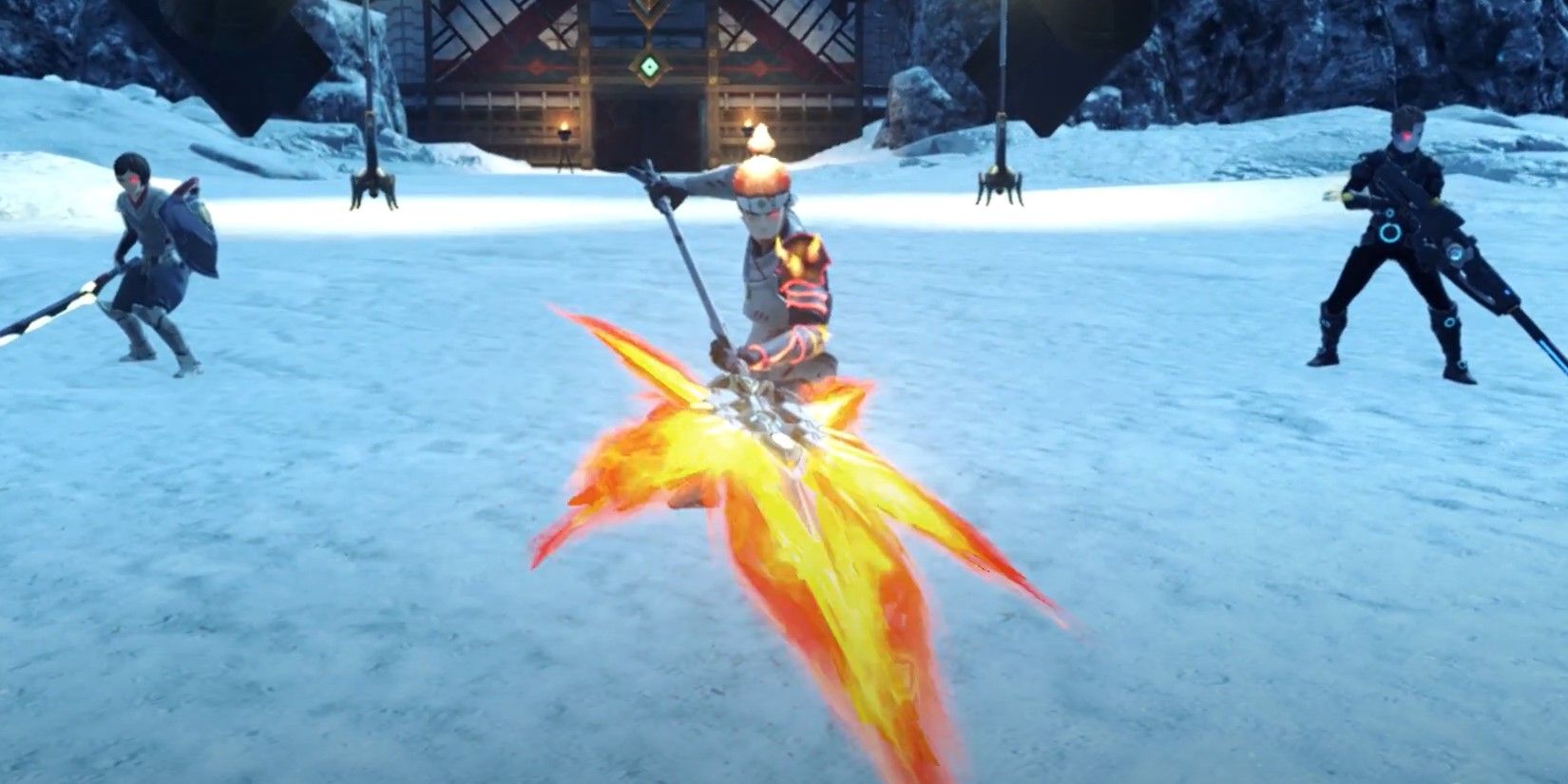 Few weapons are as destructive as the Heatshimmer Spear, the go-to weapon of the Seraph Class. With a tip made of flames, this smoldering weapon is as beautiful as it is deadly.

The flames are so powerful in fact that using certain moves with it will damage you as well. Because of this, few outside the reckless Seraph Class are brave enough to handle such a ferocious tool of destruction, but those that take the risk will find its offensive prowess to be unmatched.