As the world’s largest code-hosting platform, GitHub needs little in the way of introduction. But the Microsoft subsidiary has also spawned an ecosystem of businesses built directly upon GitHub, spanning cybersecurity, bug detection, productivity, and more.

One of these companies is ZenHub, a 7-year-old Canadian startup that offers developers a project management and collaboration tool baked directly into the GitHub interface. Accessible via a browser extension or standalone web app, ZenHub users can create project roadmaps and reports, generate task boards to visualize issues and track dependencies, and — as of last September — create automated workflows to free developers from manually handing off work to other teams. The company also claims more than 2,400 paying customers, including Microsoft, Adobe, Docker, SAP, Comcast, IBM, HubSpot, Cisco, and Shopify, which is good going for a startup that has until now bootstrapped its way to profitability.

Today, however, ZenHub announced its first external funding. The Vancouver-based company has secured $4.7 million in funding from BDC Capital and Ripple Ventures, with participation from a slew of individual investors including former Heroku CEO Adam Gross. Additionally, ZenHub also launched a new feature designed to save developer teams time by automatically scheduling sprints that create and close all by themselves. A “sprint,” for the uninitiated, is an agile software development process that requires a specific piece of work, usually part of a broader project, to be completed in a given period of time.

“When we speak with teams at these [enterprise] companies, a common pattern emerges,” ZenHub cofounder Aaron Upright told VentureBeat. “Development teams are under more pressure than ever to increase their velocity, yet these same teams often lack the resources and knowledge to work in agile ways. We think automation can fix this.”

ZenHub Sprints, which has been available in beta up until now, essentially automates the sprint planning process and removes much of the manual to-ing and fro-ing involved in managing tasks across software development projects.

Above: ZenHub: Setting up a new sprint

Users can automatically create up to 3 new sprints at a time, saving project managers from manually creating and naming the sprints. Additionally, it automatically assigns issues based on a team’s so-called “velocity,” an agile development metric that represents the amount of work a team can handle during a sprint, and carries over any unfinished work to the next sprint.

Above: ZenHub: Scheduling an automatic sprint

From a ZenHub board, teams can add issues using a multi-action or a mix of filtering and multi-action, which is designed to remove the repetitive process of performing specific actions. So if a team is setting up a bug-tackling sprint, for example, they can filter the board by the bug’s label, select “all issues,” and then hit “set sprint.”

Above: ZenHub: Adding issues to a sprint

Up until now, ZenHub has leaned on GitHub’s built-in Milestones feature for sprint planning, something it will continue to support moving forward. However, as ZenHub has grown its footprint across the enterprise, Upright said that it has received feedback from customers with “more complex workflows.”

GitHub’s Milestones, for example, are tied to a single repository. “For teams that have complex workflows that span multiple repositories, this makes Milestones very difficult to use for sprint planning purposes,” Upright explained. “A workaround could be to recreate the Milestone in each repository the team is working from; however, that creates more manual overhead for a project manager. ZenHub Sprints puts an end to this by allowing the same Sprint to exist across multiple repositories at the same time.”

In essence, this means that if different parts of a team are working on different GitHub repositories, it’s still possible to view all of their work collectively in a single Sprint view.  “This also makes reporting much easier, as project managers can look at a single ZenHub burndown chart to understand progress,” Upright said.

As an aside, ZenHub packs a bunch of reporting smarts based on GitHub data, which can reveal the progress of a project and even predict completion times using historical data. This can help managers tweak their timelines for longer-term projects, or even identify bottlenecks before they cause any real disruption. 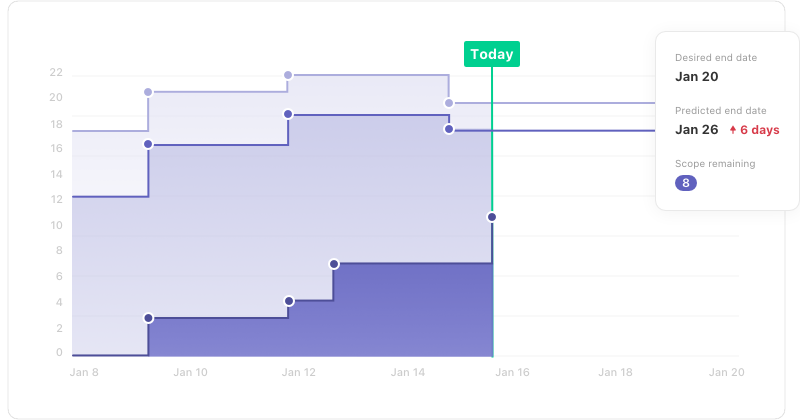 While ZenHub has so far managed to gain real and meaningful traction without any external funding, which is something of a rare beast these days, it’s clear that software-focused companies (pretty much every company) have had to improve their efficiency and embrace the rapid transition to online services.

“What we heard time and time again was that development teams were under more pressure than ever to produce, but lacked the process to work in more efficient ways,” Upright said. “Surprisingly, we also saw this trend in many large companies. Where enterprises did have dedicated resources to help teams work in more efficient ways, these resources were often spread incredibly thin and having to support multiple teams at once. The pandemic only further exacerbated this.”

For ZenHub, this has meant it too has to reconsider its own position, and whether it was possible to scale at a rate necessary to support software teams.

“When we thought about how we could help solve this problem for teams, we saw automation as the solution,” Upright said. “While we could have continued on this journey as a self-funded company, the pandemic and the resulting rise in demand for our solution made us reconsider. The driving reason to raise outside capital was so that we could act with more urgency and scale our efforts and help development teams work more efficiently.”

With a fresh $4.7 million in the bank, Upright said that the company will be investing in growing its product and engineering teams, and will be even more laser-focused on developing automation tools for developers. He said, “Automating sprint planning with ZenHub Sprints is just the beginning of our automation roadmap and we have some exciting things in the works around story point estimation and backlog refinement.”

Looking further down the road, Upright said that ZenHub could explore other integrations beyond GitHub where developer teams spend their time — for example, in CI/CD products such as CircleCI or even with design tools like Figma. However, GitHub, ultimately, is where the startup’s core focus will remain for now.

“GitHub remains the fastest growing developer ecosystem on the planet, and we’ll be continuing to expand on our integration with GitHub as they launch new features and functionality within their platform,” Upright said.