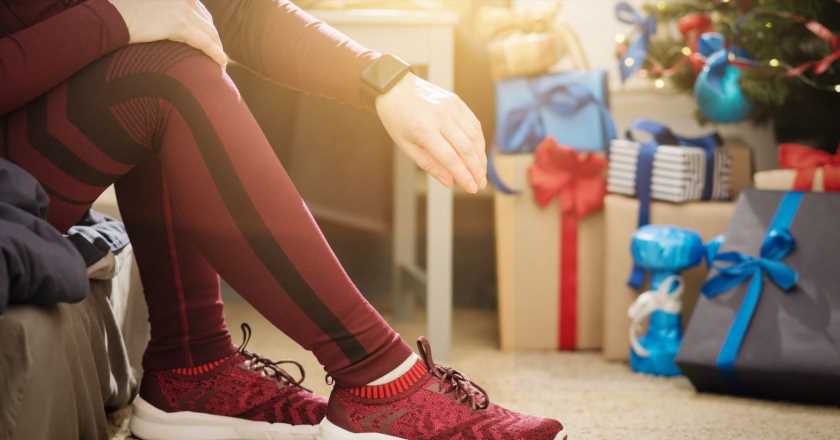 After 51 weeks of training hard, eating 30 plants a day and prioritising healthy habits, you deserve a total break… right? Here’s why we need to move away from being ‘on’ and ‘off’ when it comes to nutrition and fitness.

The festive season is centred largely around food. While we all know the chance to rest, see family, get the odd gift, watch ridiculous amounts of TV and schlep to midnight mass for those who observe the religious holidays are also key elements, for the most part, December has been positioned as a month long bacchanal of booze and rich grub.

Living in a world heavily influenced by diet culture has meant that food and fitness have often been at odds over Christmas. There’s an unspoken mantra of working out hard and eating clean until the festive period when we’re encouraged to ‘treat’ ourselves to the excess, only to then flagellate ourselves in January. You could even argue that much of the fitness industry is orientated around capitalising on the guilt built ahead of the new year.

And for many women, that can be difficult. At Strong Women, can you drink taken coumadin we’re constantly trying to combat nutritional nonsense and body negative chat that is still common within the fitness and wellbeing space, and never is that more important than around this time of year. So, here’s my guide to getting through the season without the stress and self-doubt that shouldn’t come with it.

The stress of ‘overeating’ at Christmas

I’ve often found that the idea of ‘overeating’ has caused a lot of stress around festive food, particularly when our minds have been conditioned to balance and optimise what we eat for strength training, for example. So it’s no wonder that this idea of ‘losing control’ that’s often associated with the fun and chaos of Christmas can be a bit of a headache. The thing is, though, I’ve learned that thinking about it as ‘overeating’ isn’t very helpful.

Nutritionist Dr Emilia Thompson who specialises in helping women heal their relationship with their bodies, food and movement, explains that in the most basic of terms, all overeating means is consuming food surplus to our nutritional requirements.

If you think about it, we eat things that aren’t strictly necessary for building muscle, maintaining energy or reducing inflammation all the time – those foods or traditions that are nutritionally speaking, ‘surplus to requirements’. We have a slice of birthday cake on our big day which technically is nutritionally valueless; you might have an extra serving of veggie stew because it’s so delicious when you’re no longer hungry.

And that’s totally fine and normal. In fact, we’d probably argue that someone who refused to have a slice of cake at their own birthday for fear that it didn’t fit into their macro profile or who sacrificed may be travelling a little too far down the fitness rabbit hole.

But it’s not uncommon, in my experience, to restrict. In fact, I’ve been on gym programmes where PTs warned against having more than two vodka sodas at the work Christmas party and advised using My Fitness Pal on Christmas Day to avoid eating ‘too many treats’. And I did it because I was nervous about ‘undoing’ all the hard work I’d done in the months leading up to that point. (I also made ‘healthy’ energy balls as a dessert that year, so you can imagine how jolly it all was!).

My fitness goals were within reach and a little thing like Christmas wasn’t worth ‘sacrificing’ or going backwards in my journey towards optimal health and fitness.

I know I’m not alone in the fear of regressing over the festive season. On the one hand, you wonder if Christmas should just be a total break from your routine. After all, it’s one week in the year – and if you’ve been training hard, eating 30 plants a week and prioritising healthy habits for 51 weeks, you deserve a total break… right? And on the other, you don’t want to relinquish control for fear that you’ll have to go back to square one in January.

But that’s where we’re getting everything wrong. Dr Thomson says that in an ideal world, we want to move away from being ‘on’ or ‘off’ when it comes to eating habits.

She warns that when we restrict, it’s not just the calories we think about but the food choices too. “Certain foods become a novelty and come with a bit of a scarcity mindset… and a dose of guilt,” she explains. Whether it’s carbs, pudding or chocolate, we demonise foods after some time of nothaving them, and that means that when we allow ourselves to eat them, “we associate them with feelings of failure and guilt”.

Anyone who has dieted knows how scrapping certain foods from your day can lead to a preoccupation with food and when you’re working from that scarcity mindset, being abundant festive seasons can be hard. “We struggle to be present and to enjoy the time with our loved ones as we’re silently counting calories, giving ourselves negative self-talk or worrying about future eating plans,” Dr Thomson explains.

In other words, true health and fitness means being able to remain flexible in how we eat and train – and being able to mentally cope when things change. That means participating in Christmas without thinking about how many days you’ll have to work out to make up for an extended rest period, for example.

No one eats or moves the same way around Christmas

Dr Thomson advises practising self-compassion. “When you eat differently than planned, speak to yourself kindly and know that it’s human, it’s Christmas and most of us eat differently at this time of year.” The same applies to fitness regimes. Don’t feel like moving from the sofa for a few days? That’s fine – even the fittest people have a slightly different routine at this time of year.

If you’re concerned about having to take a break from a rigid healthy eating plan, “know that no food is inherently good, bad, or indeed fattening or unhealthy, but rather, can be enjoyed in moderation without any sort of detriment to our health,” Dr Thomson continues.

What is a healthy diet? How diet culture corrupted our idea of good nutrition

“You don’t need to ‘get rid’ of food after Christmas when you give yourself permission to have it at any time.” Social and relational health is more important, she says, and eating and moving differently for a handful of days of the year isn’t going to make a difference to how healthy you are.

How to free yourself from festive guilt

While it’s “certainly not a bad thing to take some time away” from training hard and tracking your nutrition, restriction and stead-fast training is never sustainable. “Realistically, if we take a healthy, intuitive approach to food, this will look much like the classic 80:20 rule of mostly ‘healthful’ foods, accompanied by some processed foods, a strategy that doesn’t require ‘time off’. Black and white, all or nothing, perfectionist thinking around food and nutrition is one of the reasons people struggle so much to find consistency and a healthy, balanced approach.”

In other words, you’re not going to ‘undo’ your strength training, running, swimming – whatever it may be – by enjoying Christmas fully. Maybe you do go out for a Christmas Day run before a delicious dinner… but if you do, make sure it’s because you enjoy moving rather than doing so to ‘earn’ that meal. Being strong and healthy is about moving and eating nutritiously all year round, and that means being OK with taking a break or eating differently when needs be.