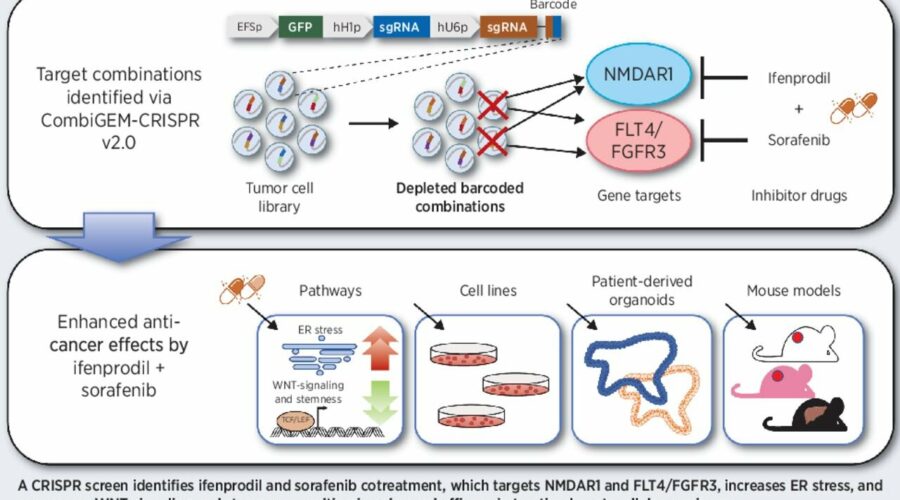 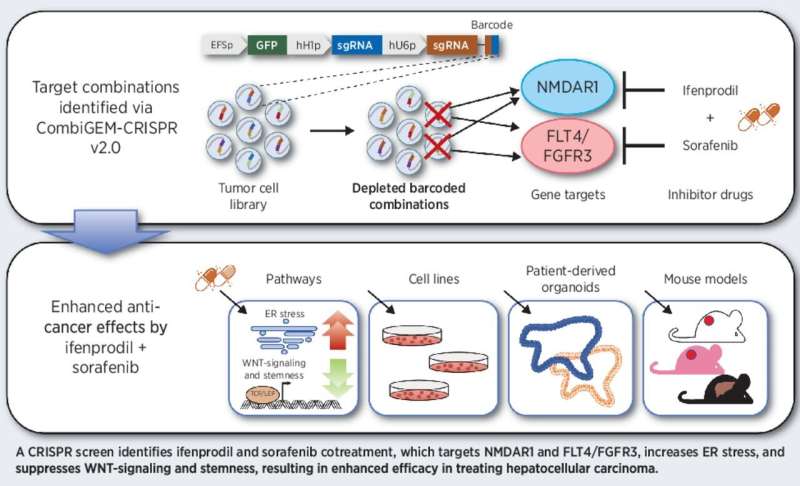 A research team of LKS Faculty of Medicine, The University of Hong Kong (HKUMed) has successfully repurposed an approved drug ifenprodil, a vasodilator, to be used in combination with the FDA-approved first-line drug sorafenib for hepatocellular carcinoma (HCC) treatment. This study leveraged on their CombiGEM-CRISPR v2.0 screening platform1 to expedite the search among the many possible drug combinations to inhibit druggable targets in the genome for treating HCC. The findings are now published in Cancer Research.

Liver cancer is the sixth most common cancer and the third leading cause of cancer related death worldwide. Despite the promising initial response to molecularly targeted therapies, tumors are often susceptible to developing drug resistance. It is no exception for sorafenib, amoxicillin things to avoid the mainstay of treatment for HCC, and the available treatment options are very limited. Drug combination is a strategy for expanding options for cancer treatment to reduce the risk of drug resistance and tumor relapse that often arises in standalone treatment. The simplicity and precision of CRISPR-Cas9 that uses guide ribonucleic acids (RNAs) to knockout any genes in the genome make it a great tool to identify targets for potential drug discovery and development.

Utilizing the screening platform of CombiGEM-CRISPR v2.0 to generate multiplexable gene knockouts, this study rapidly characterized the survival of cancer cells following dual-genetic knockouts in a pool of cells linked with DNA barcodes specifying the types of genetic alterations they carry. Instead of using conventional drug screening array that requires handling of numerous independent multi-wells, this platform only requires a simple experimental setup as the number of DNA barcodes carried by a large population of cells grown in the same culture dish could be counted in high volume via high-throughput sequencing technologies. Through screening genes and their combinations from which hits can be translated directly into drug combinations using existing drugs, non-conventional drugs and drug combinations could be discovered and repurposed for treating cancers.

Through a combinatorial CRISPR-Cas9 screen focusing on a set of druggable targets of which their expressions are upregulated in HCC cancer stem cells, the HKUMed research team identified two combinations harboring a common target known as NMDAR1 and its paired targets are two kinases (FLT4 and FGFR3) of which both their corresponding drug inhibitor is the first line sorafenib. Specifically, genetically ablation of the identified gene combinations inhibits HCC cells’ growth and self-renewal ability. Based on The Cancer Genome Atlas database, the research team also unveiled the clinical significance of NMDAR1 in HCC, where HCC patients with low level of NMDAR1 expression show better survival outcomes.

The team also revealed the enhanced inhibition effect of the corresponding drug combination and their underlying molecular mechanisms. Co-administration of ifenprodil and sorafenib remarkably reduced the cell growth and stemness in multiple HCC cell lines, patient-derived organoids and tumor xenograft models. Additionally, the team also showed that the upregulation of unfolded protein response, triggering of cell-cycle arrest, and downregulation of genes associated with WNT-signaling and stemness could account for the enhanced effects of the drug combination.

Ifenprodil has been used as a vasodilator in countries including Japan and France with known safety history in humans. Combined with the first line sorafenib, the HKUMed research team has successfully demonstrated this two-drug regimen profoundly suppressed HCC cells’ growth and self-renewal ability.

“Successful drug repurposing saves the cost and time that otherwise would be needed for developing new therapeutic agents with uncertain efficacy and safety profile. It also increases the chance of clinical translation of the findings from bench to bedside as the identified drug combination could be readily tested in future trials for treating HCC. Our work has identified a potentially useful drug combination to be further tested for the treatment of HCC patients from approved drugs, which could possibly save or prolong patients’ life,” said Dr. Stephanie Ma, Associate Professor of the School of Biomedical Sciences, HKUMed, who co-led the study.