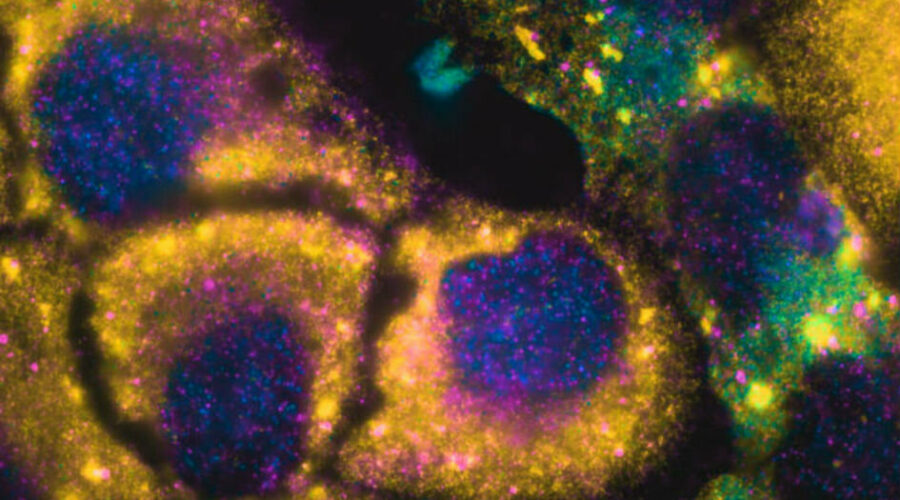 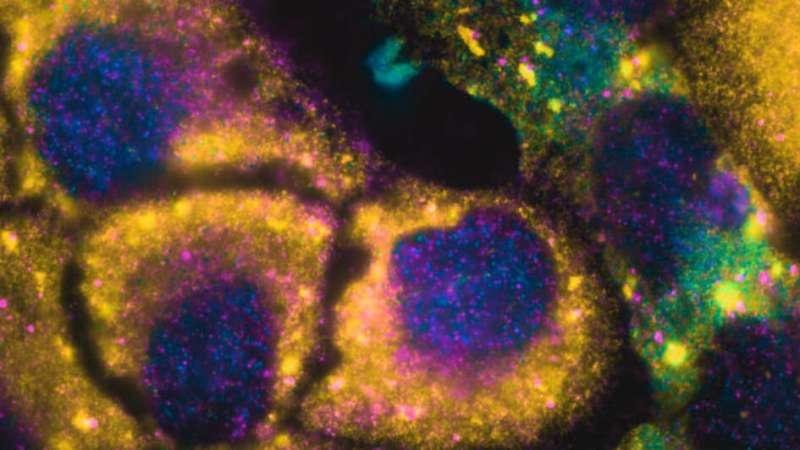 The last decade has brought major advances in the way we diagnose and treat prostate cancer and men with advanced disease are living longer than ever. We spoke to our scientists about the most exciting research areas that have the potential to revolutionize prostate cancer treatment in years to come.

The ICR’s scientists, including Professor Ros Eeles, Professor Johann de Bono and Professor Nick James, are advancing our understanding of prostate cancer and how to treat it—so that many more men can live longer, better lives in the next decade.

As our understanding of the genetics behind prostate cancer expands, it’s possible that simple tests could reveal someone’s risk of prostate cancer, meaning those at highest risk could benefit from more frequent screening.

Professor Ros Eeles has been studying prostate cancer genetics at the ICR for more than 25 years. She has led research identifying more than two thirds of the currently known genetic variants that increase prostate cancer risk—and could identify many more in the next decade.

“One of the main research areas undergoing a revolution in cancer research is the use of genetic discoveries to group and separate populations into different levels of risk, so that we can target early detection to those men that need it the most,” she said.

At the ICR, Professor Eeles is leading studies like GENPROS, an international study following men with changes in genes such as BRCA1, BRCA2, MMR or HOXB13, and following their prostate cancer diagnosis and treatment. The aim is to better understand how well treatments work in these men at higher risk.

Prostate cancers can often grow too slowly to threaten a man’s life. For this reason, many men who have early disease and do not carry a mutation linked to cancer would normally just be watched closely by clinicians, as the disease is unlikely to progress further.

What Professor Eeles and her team are trying to figure out as part of GENPROS is: should we use the same ‘active surveillance approach’ with men who carry certain mutations, such as BRCA2, for example?

Along with GENPROS, Professor Eeles is also leading PROFILE and IMPACT, two other studies investigating the most appropriate screening and management of prostate cancer in different groups of men at higher risk.

“Once we know who is more likely to benefit from screening, we can work to achieve early diagnosis. This is where a second revolutionary area of research becomes important: developing and using new types of diagnostic techniques. For example, liquid biopsies—simple blood tests aiming to identify changes specific to the tumor which can direct the clinician as to where they should try new targeted treatments,” says Professor Eeles.

Liquid biopsies could transform clinical practice in the future, as they enable a new, more personalized approach to cancer treatment. Instead of using conventional tissue biopsies, which involve surgically removing a piece of the tumor and are invasive and painful, to analyze tumor DNA, researchers can use blood tests that pick up tumor DNA circulating in the bloodstream.

Last year, Professor Johann de Bono and his team used liquid biopsies to predict how well men with advanced prostate cancer responded to treatment with abiraterone with or without ipatasertib. Their research suggested these simple blood tests could replace some of the existing methods used to characterize and track the disease in the clinic.

When they analyzed cancer DNA from the blood tests, researchers found specific genetic changes associated with drug resistance—which indicate that men are at risk of early relapse.

“These simple blood tests could help us track how cancer changes and stops responding to treatment. We are already using them as part of clinical trials and they are likely to eventually become part of routine care. Liquid biopsies are minimally invasive, cost-effective and can be performed often and with ease. Tracking prostate cancer with a blood test instead of a painful surgical biopsy could significantly improve patients’ quality of life,” said Professor Johann de Bono.

Professor Johann De Bono has also been working on research involving a new ‘search-and-destroy’ medicine known as PSMA therapy. The treatment acts like a guided missile, consisting of a radioactive particle that can be delivered directly to cancer cells.

The treatment, sometimes known as Lutetium-177 PSMA, uses a ‘homing device’ to seek out cancers by detecting the presence of a target molecule called prostate-specific membrane antigen (PSMA) on the surface of cancer cells. Once in contact, it delivers a radioactive payload to kill them.

Professor De Bono’s team found that the treatment’s PSMA target is present at higher levels on the surface of cancer cells in some patients than others, making it possible that a genetic test could pick out men who are most likely to benefit from the therapy.

This year a phase III trial called VISION, involving Professor Johann De Bono, showed for the first time that the therapy is effective and can keep patients with advanced prostate cancer alive and healthy for longer.

Around a third to a half of the 10,000 men a year diagnosed with advanced prostate cancer have tumors with high levels of PSMA and could therefore benefit from the treatment. For this reason, PSMA therapy, which was approved by the U.S. Food and Drug Administration (FDA) earlier this year, could be a game-changer in years to come.

Targeted drugs that are kinder to patients

Increasingly, we are moving away from a ‘one-size-fits-all’ approach to cancer care and we are getting better at tailoring treatment to individuals.

The benefit of targeted treatments is that they involve fewer side effects and can help prostate cancer patients live longer but also with a better quality of life.

In the next decade, we are hoping to increase access to targeted treatments that already exist, bringing them to more patients, and we are also hoping to discover and develop new ones.

Abiraterone, a targeted hormone therapy discovered at the ICR and developed in partnership with our partner hospital The Royal Marsden has already given hundreds of thousands of men around the world extra years of life without the side effects of other treatments.

Another precision drug, olaparib, is known for its use in breast and ovarian cancer, but Professor Johann de Bono has led trials showing that olaparib can be effective in men with prostate cancer who have tumors with mutations in specific genes involved in DNA damage repair, such as BRCA1 and BRCA2. It is now available in Scotland as a treatment for some men with prostate cancer.

It is thanks to well-conducted clinical trials that new cutting edge drugs eventually become available to patients.

STAMPEDE, led by Professor Nick James, is an innovative multi-arm multi-stage (MAMS) trial which also helped change the standard of care for men with advanced prostate cancer. Three of the treatments tested have shown substantially improved survival: abiraterone, docetaxel chemotherapy and prostate radiotherapy in men with disease that has spread at diagnosis.

“When we started the STAMPEDE trial back in 2005, the survival of advanced prostate cancer that had spread to other parts of the body was around three and a half years, on average. Now, it’s around seven to ten years—and abiraterone and the other advances from the STAMPEDE trial can claim a lot of the credit for that,” said Professor James

STAMPEDE is an adaptive clinical trial—meaning researchers can add in new treatments to the trial and drop ineffective treatments early. In other words, MAMS trials help us answer multiple research questions simultaneously and compare more than one treatment under a single trial protocol—saving money, time and resources, while also generating evidence more quickly and accelerating the delivery of the next game-changing treatments for patients.

The MAMS approach has famously been used to trial potential COVID-19 treatments in the RECOVERY trial, the world’s largest clinical trial into treatments for COVID-19, involving more than 40,000 participants across 185 trial sites in the UK.

“Rather than waiting to set up a new trial to test a new treatment, you can just add a new treatment arm to a trial that is already ongoing. Additionally, recruitment to a trial takes a long time to build up, but by adding a new arm to an existing trial, recruitment becomes less of an issue as the set up process has already happened,” said Professor James.

“As STAMPEDE progresses, we’ve been adding new comparisons to the trial, which should help us answer even more questions, allowing us to figure out what the best way of treating men with newly diagnosed advanced prostate cancer is, faster. So far, STAMPEDE has tested ten different treatment combinations, with three more new ones in set up.”

The immune system is able to kills cells that are harming the body, including cancer cells. However, cancer can often turn off the body’s natural ‘anti-cancer immune responses.” One way in which our scientists are trying to defeat cancer is by reawakening the immune system, encouraging immune cells to attack cancer cells.

Immunotherapy is a type of treatment that has been very effective in other cancers, including skin cancer, but we are just beginning to make it work for men with prostate cancer.

However, investigating the immune response in prostate cancer is already starting to show promise. Professor Johann de Bono has been working to understand and target a protein known as CD38, displayed on the surface of immune cells. He will soon be leading a clinical trial in this area, which is a first in prostate cancer—looking at drugs which target CD38, which could hold promise against prostate cancer by reawakening the anti-cancer immune response and fighting cancer’s ‘cloaking’ strategy, which allows it to hide from the immune system.

Another trial looking at an immunotherapy showed that some men with advanced prostate cancer with mutations in genes involved in DNA repair, like the BRCA genes, and who had exhausted all other treatment options could live for two years or more on the immunotherapy pembrolizumab.

More and more evidence is showing that the microbiome—the community of microorganisms living in and on us, which are essential to our development and immunity—plays a role in many diseases, including prostate cancer.

In future we might see bacterial ‘fingerprints’ used in the clinic to pick out patients at high risk of developing resistance to treatment. These patients could then benefit from strategies to manipulate their microbiome—for example, men could undergo fecal transplants to alter their intestinal microbiota, reducing the number of certain potentially harmful bacterial strains.

Ultimately, researchers hope to come up with a yogurt drink enriched with bacteria that could also switch the microbiome to a more favorable profile and avoid or delay resistance to hormone treatments.

Another recent advance is the MR Linac, which combines two technologies—an MRI scanner and a linear accelerator. This technology, which is currently being trialed by researchers at the ICR and The Royal Marsden, allows radiographers and clinicians to precisely locate tumors, tailor the shape of X-ray beams in real time, and accurately deliver doses of radiation even to moving tumors. This is particularly important for cancers that can move during radiotherapy, or between scanning and treatment, including prostate cancer.

Professor de Bono shared his thoughts on the future:

“The last decade has been historic for prostate cancer research, many advances have been made—we have started to use genetic information to personalize treatment, reduced side effects thanks to targeted therapies and we are just beginning to train the immune system to combat prostate cancer.