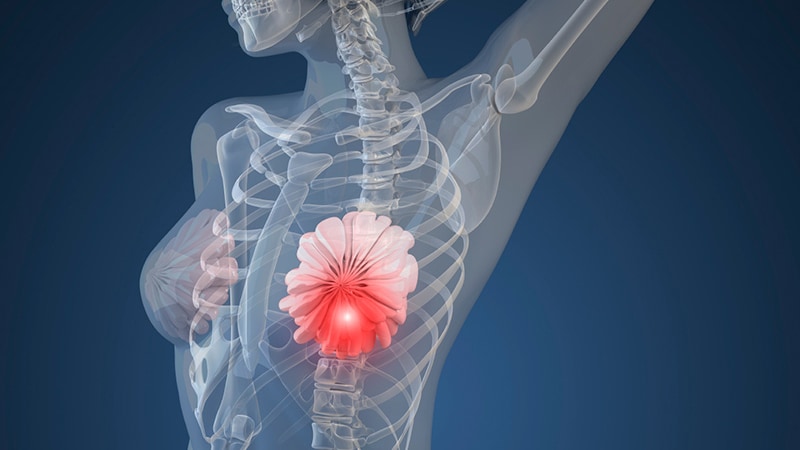 There was over a 12-month improvement in median overall survival when the CDK 4/6 inhibitor ribociclib was added to the aromatase inhibitor letrozole for postmenopausal hormone receptor positive/human epidermal growth factor receptor 2 negative metastatic breast cancer, according to phase 3 results presented at the European Society for Medical Oncology Congress 2021.

“Based on these results, ribociclib and letrozole should be considered the preferred treatment option,” said lead investigator Gabriel N. Hortobagyi, MD , a breast cancer medical oncologist at the University of Texas MD Anderson Cancer Center, Houston.

He presented the definitive overall survival results from MONALESSA-2 which randomized 668 patients equally and in the first line to either ribociclib or placebo on a background of standard dose letrozole.

It was the first report of a median overall survival (OS) exceeding 5 years in a phase 3 trial for advanced breast cancer. The estimated 6-year OS rate was 44.2% for ribociclib versus 32.0% with placebo.

“These are really impressive results” and support the use of CDK 4/6 inhibitors in the front-line setting, how long till doxycycline expires ” said study discussant Gonzalo Gomez Abuin, MD, a medical oncologist at Hospital Alemán in Bueno Aires.

Ribociclib and other CDK 4/6 inhibitors have shown consistent progression-free survival benefit for metastatic disease, but ribociclib is the first of the major phase 3 trials with definitive overall survival results. They have “been long awaited,” Abuin said.

The overall survival benefit in MONALESSA-2 began to emerge at around 20 months and continued to increase over time.

Women had no prior CDK4/6 inhibitor treatment, chemotherapy, or endocrine therapy for metastatic disease. “They represented a pure first-line population,” Hortobagyi said.

In general, Abuin said, we “see a consistent benefit with CDK 4/6 inhibitors in metastatic breast cancer across different settings.”

However, “it’s a little intriguing” that in a subgroup analysis of non–de novo disease, the overall survival benefit with ribociclib had a hazard ratio of 0.91, whereas the progression-free survival benefit was robust and statistically significant in an earlier report.

“This has been an important question, but I would caution all of us not to make too much out of the forest plot,” Hortobagyi said.

“There are a number of hypotheses one could come up with that could explain why the de novo and non–de novo populations faired differently in overall survival as opposed to progression-free survival, but there is also the simple possibility that this is a statistical fluke,” he said.

“We are in the process of analyzing this particular observation. In the meantime, I think we should just take the overall survival results of the entire population as the lead answer, and not follow the subgroup analysis until further information is available,” Hortobagyi said.

No new ribociclib safety signals were observed in the trial. The most common adverse events were neutropenia and liver function abnormalities, but they were “largely asymptomatic laboratory findings and completely reversible,” he said.

Twice as many patients treated with ribociclib developed prolonged QT intervals, but again, “no clinical consequences of this EKG finding were detected,” Hortobagyi said.

Less than 1% of patients in the ribociclib arm developed interstitial lung disease. The majority of safety events occurred in the first 12 months of treatment.

The work was funded by Novartis, maker of both ribociclib and letrozole. Hortobagyi reported receiving an institutional grant from the company and personal fees related to the trial. Other investigators disclosed ties to Novartis. Abuin reported relationships with many companies, including Novartis.