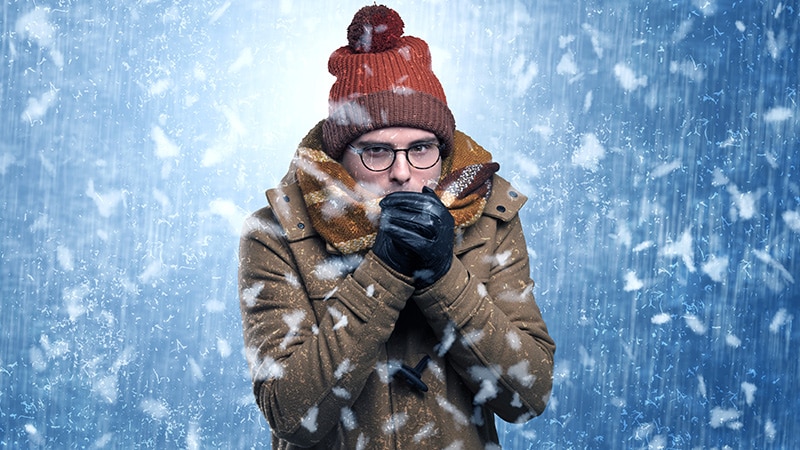 Presenting the preliminary findings at this year’s European Association for the Study of Diabetes (EASD) Annual Meeting, Adam Sellers, a PhD student from Maastricht University in the Netherlands, said: “The results are highly promising and may eventually suggest an alternative treatment or preventative measure for type 2 diabetes.”

Sellers found that 10 daily 1-hour sessions of shivering at 10°C led to 85% of participants showing a drop in fasting glucose, and a 32% drop in lipid levels, as well as a blood pressure drop of around 8% overall.

Although cold exposure is known to increase brown fat, Sellers doesn’t believe this explains his findings. “This research, in addition to two other prior studies, suggest that shivering and skeletal muscle may play a more important role than brown fat,” he said.

“Muscle can contract mechanically — [the concept of the] shivers — thereby generating heat, and there is considerably more muscle than brown fat in a human, so shivering can burn more calories and produce more heat,” he explained.

He added that in the future, “in a similar way to saunas and steam rooms, there might be cold rooms where people go and sit in the cold room and shiver, or possibly patients attend hospital and shivering is induced.”

Audience member Anna Krook, PhD, professor of integrative physiology at the Karolinska Institute, Stockholm, commented on the work, saying the results are “potent” and demonstrate the metabolic effect of shivering. “One thing that struck me was, given the time the subject had to spend — 1 hour shivering over 10 days, I wonder if 1 hour of exercise would show similarly potent effects, and perhaps for those people who cannot perform exercise for whatever reason this might be a good alternative.”

She pointed out that in terms of translation into practice, it “really depends on how tolerable this is. It also shows how important our muscle is in regulating metabolism. The study showed that you had to be shivering, and it wasn’t just enough to be cold, which has implications for the role of brown fat, especially when we consider the small amount of brown fat we have compared to muscle, which can be half of body weight.”

1 Hour in a Cold-Water Suit to Induce Shivering

In the current study, Sellers exposed adults (aged 40-75 years; 11 men and 4 postmenopausal women) with overweight/obesity (BMI 27-35 kg/m²) to 10 consecutive cold exposures of at least 1 hour of shivering per cold exposure.

“The shivering in this new research was more intense [than in prior studies] and was induced with a different cold exposure method— a 10°C water-perfused suit [compared with a prior study of 14-15°C, 6 hours/day]. This facilitated a shorter cold exposure duration, deemed feasible for the participants,” explained Sellers.

“At baseline, participants had glucose and A1c levels at the upper end of the normal criteria [5.5 mmol/l and 5.4%, respectively],” he said, referring to measurements that were suggestive of possible progression to type 2 diabetes.

He explained how the cold exposure was applied. “We induced the cold with a water-perfused suit worn by the participant, through which water flows at 10°C, and this cools the participant. Eventually, the participant starts to shiver, and does so for at least 1 hour every morning for 10 days.”

Participants’ shivering-induced heat production was measured via surface electromyography and visual observation to confirm the presence of shivering.

Both before and after the 10-day course of shivering, physiological measurements were taken in the morning while participants were at rest in an overnight fasted state, and under thermoneutral conditions. Blood pressure and fasting blood glucose were measured.

The primary endpoint was change from before to after the 10-day shivering intervention, as represented by the total area under the curve of glucose levels over time during the OGTT.

“This provides a measure of the glucose concentrations in the blood before and after the 10 shivering sessions over the 10 days.” 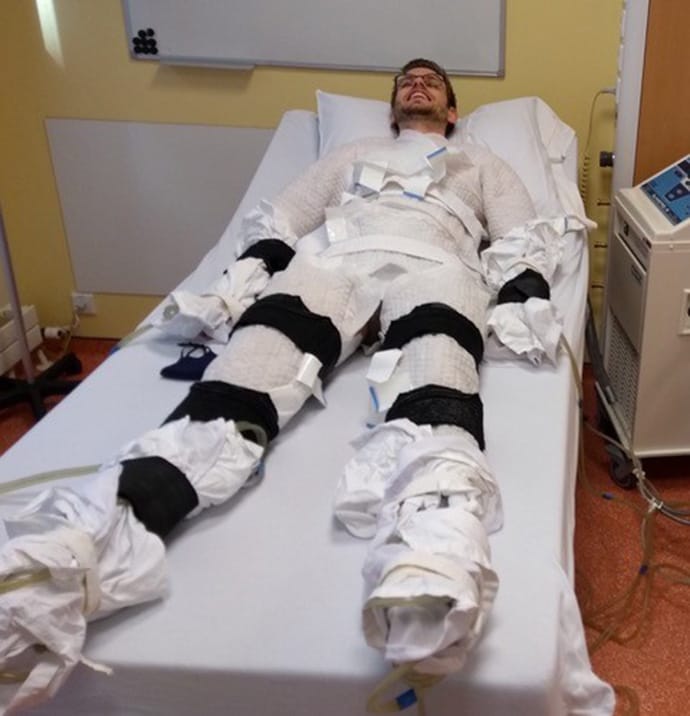 For the study, shivering was induced using a water-perfused suit.

After 10 shivering sessions, mean fasting plasma glucose decreased significantly in 13 out of the 15 participants compared with before the first session (from 5.84 mmol/L to 5.67 mmol/L; P = .013).

“This is important because free-fatty acids are involved in the role of insulin resistance,” said Sellers. “In addition, the large reduction in serum triglycerides could have implications for atherosclerosis, which may also be beneficial.”

“Again, quite strikingly, all participants showed” a reduction in blood pressure, said Sellers, which he noted relates to a decrease in resting heart rate (P = .062).

Sellers pointed out that, despite nonshivering thermogenesis being involved in mild cold acclimation, the data so far suggest that some level of mild muscle activity or shivering appears crucial in provoking the beneficial metabolic effects of cold acclimation.

“Brown fat is a metabolic heating system inside our bodies, burning calories”, explained Sellers. “This generates heat and prevents calories from being deposited as normal white fat. Brown fat is activated during cold and when we eat, but its activity is less in older adults and in individuals with obesity and diabetes.”

“Going forward, we might investigate the effects of shorter duration — so more intense shivering — to try and elucidate more precisely the optimum duration and intensity of shivering needed,” said Sellers.

“Our findings are promising and may have important health implications. In future studies, we plan to assess the effect of shivering in adults with type 2 diabetes,” he concluded.

Seller and Krook have reported no relevant financial relationships.