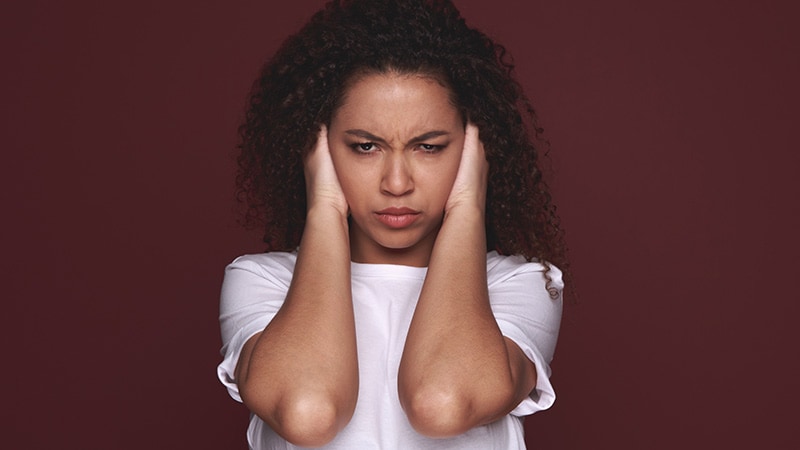 The prevailing view of the condition was that it may be caused hypersensitive connections between the brain’s auditory cortex and orofacial motor control areas. However, results from the new study shows that sounds such as tapping, which can also trigger misophonia, are associated with other areas of the brain — notably the insula.

These findings “suggest misophonia extends beyond just an aversion to oral/nasal stimuli and that vast individual differences exist in how the condition presents itself,” study investigator Heather Hansen, MA, a doctoral candidate in psychology at Ohio State University, told Medscape Medical News.

The results were published online August 9 in Frontiers in Neuroscience.

Misophonia is a “highly prevalent yet understudied disorder of sound processing,” affecting about 20% of the general population, the investigators note.

Anecdotal reports from affected individuals “reveal serious daily impairments attributable” to the condition. However, it is “severely understudied, with mechanisms vastly unknown,” they add.

Neuroimaging studies on misophonia is “scant,” but recent research demonstrating higher resting-state functional connectivity on MRI (rs-fMRI) between the auditory cortex and orofacial motor cortex in those with the condition vs a healthy controls group “has led researchers to speculate that misophonia is caused by orofacial mirror neurons,” the investigators write.

However, individuals with misophonia “are bothered by more than just oral/nasal sounds,” said Hansen. Thus, focusing only on orofacial sound triggers is “likely to miss important findings.”

The current study included 19 adults (75% women; mean age, 25.6 years). Most were White, although five identified as Asian, two as Middle Eastern, and one as Latino. All were part of a larger ongoing longitudinal study of brain development.

The participants underwent two types of fMRI: resting-state and task-based, during which they vocalized certain sounds.

Hansen noted that the investigators wanted to build upon past research “by functionally defining ‘orofacial cortex.'” Participants were asked to move their mouths in the scanner and the researchers measured what part of the brain was active, she added.

“This method allows for a more precise location estimation, since everyone’s brain is a little different and the exact locations of brain areas might differ from person to person,” Hansen said.

Also included was “a non-orofacial comparison, a finger area derived from people tapping their fingers in the scanner, to test whether individuals with misophonia likewise show connectivity differences to other body parts — or if the condition was specific to oral/nasal aversion as has been previously posited,” she noted.

Participants also completed three scales measuring their level of misophonia as well as the Obsessive-Compulsive Inventory-Revised and the Depression Anxiety Stress Scale-21.

The researchers defined “orofacial” cortex in each participant using rs-fMRI as put forth in previous research, producing resting-state regions of interest (rsROIs).

Results showed increased connectivity between rsROIs and both auditory cortex and the insula, which replicates previous results, with differences “extending across multiple sensorimotor regions.”

In participants with higher misophonia scores, the rsROI within the ventral premotor area showed increased connectivity in the planum temporale and posterior insula (t[17] = 2.556; P = .02) and t[17] = 2.934; P = .009, respectively). This corroborated “previous neuroimaging findings that auditory cortex and insula are key regions whose connectivity differentiates misophonia from controls,” the researchers write.

By contrast, t-tests for each nonsensorimotor ROI and functional ROI pairing revealed only uncorrected group differences in connectivity between the posterior insula and finger fROIs.

Of note, “no connections with orofacial fROIs nor with planum temporale were statistically significant, with or without corrections for multiple comparisons,” the researchers report.

Overall, the findings provide “evidence in the brain that there can be misophonic aversion to triggers that don’t have anything to do with the mouth or nose, which is a huge step forward in our understanding of the condition and is affirming to people who experience misophonia to non-orofacial triggers,” Hansen said.

Commenting for Medscape Medical News, M. Zachary Rosenthal, PhD, director of the Center for Misophonia and Emotion Regulation, Duke University, Durham, North Carolina, noted that there are “few published neuroimaging studies on misophonia” — and most have focused on oral and facial sounds.

“Even though most people with misophonia report that these kinds of sounds are indeed debilitating triggers, it is also true that these same patients commonly have other triggers that elicit distressing and impairing symptoms,” said Rosenthal, who is also an associate professor in the Department of Psychiatry and Behavioral Sciences and the Department of Psychology and Neuroscience at Duke. He was not involved with the current study.

“To understand the nature of misophonia, it is important that studies look at neural responses to a wide range of common triggering stimuli. That is exactly what the authors did in this exciting new research,” Rosenthal said.

The findings “provide new evidence that adults with high misophonia symptoms have particular neural responses to triggers that are neither oral nor facial. This suggests that misophonia may not be limited to oral or facial cues and that, when triggered, the parts of the brain that are activated are not restricted to areas that are responsible for processing of oral and facial stimuli,” he added.

The study was funded by the Alfred P. Sloan Foundation and the Chronic Brain Injury and College of Arts and Sciences at the Ohio State University. The investigators have reported no relevant financial relationships. Rosenthal is a member of the Scientific Advisory Board for the Misophonia Research Fund.

Batya Swift Yasgur MA, LSW is a freelance writer with a counseling practice in Teaneck, NJ. She is a regular contributor to numerous medical publications, including Medscape and WebMD, and is the author of several consumer-oriented health books as well as Behind the Burqa: Our Lives in Afghanistan and How We Escaped to Freedom (the memoir of two brave Afghan sisters who told her their story).