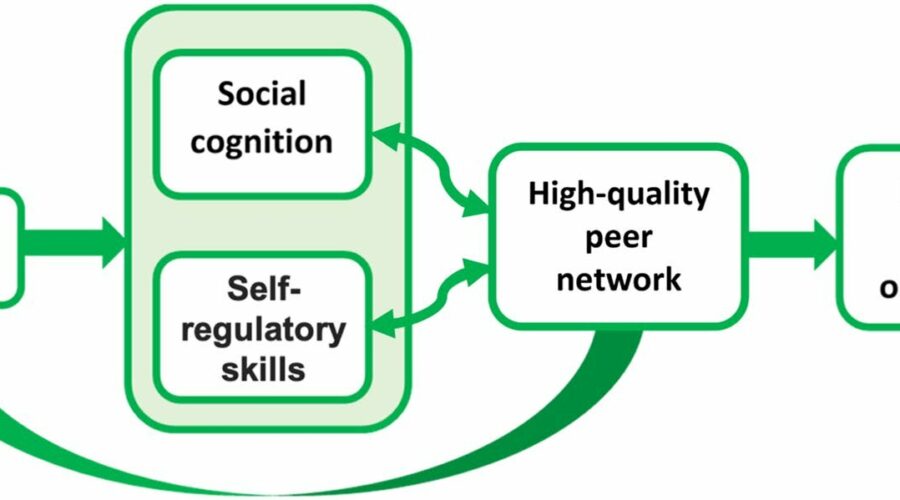 Children who learn to play well with others at pre-school age tend to enjoy better mental health as they get older, buy generic strattera montreal new research shows. The findings provide the first clear evidence that ‘peer play ability’, the capacity to play successfully with other children, has a protective effect on mental health.

Researchers at the University of Cambridge analyzed data from almost 1,700 children, collected when they were aged three and seven. Those with better peer play ability at age three consistently showed fewer signs of poor mental health four years later. They tended to have lower hyperactivity, parents and teachers reported fewer conduct and emotional problems, and they were less likely to get into fights or disagreements with other children.

Importantly, this connection generally held true even when the researchers focused on sub-groups of children who were particularly at risk of mental health problems. It also applied when they considered other risk factors for mental health—such as poverty levels, or cases in which the mother had experienced serious psychological distress during or immediately after pregnancy.

The findings suggest that giving young children who might be vulnerable to mental health issues access to well-supported opportunities to play with peers—for example, at playgroups run by early years specialists—could be a way to significantly benefit their long-term mental health.

Dr. Jenny Gibson, from the Play in Education, Development and Learning (PEDAL) Center at the Faculty of Education, University of Cambridge, said: “We think this connection exists because through playing with others, children acquire the skills to build strong friendships as they get older and start school. Even if they are at risk of poor mental health, those friendship networks will often get them through.”

Vicky Yiran Zhao, a Ph.D. Student in PEDAL and first author on the study added: “What matters is the quality, rather than the quantity, of peer play. Games with peers that encourage children to collaborate, for example, or activities that promote sharing, will have positive knock-on benefits.”

The researchers used data from 1,676 children in the Growing up in Australia study, which is tracking the development of children born in Australia between March 2003 and February 2004. It includes a record, provided by parents and caregivers, of how well the children played in different situations at age three. This covered different types of peer play, including simple games; imaginative pretend play; goal-directed activities (such as building a tower from blocks); and collaborative games like hide-and-seek.

These four peer play indicators were used to create a measure of ‘peer play ability’—the underlying ability of a child to engage with peers in a playful way. The researchers calculated the strength of the relationship between that measure and reported symptoms of possible mental health problems—hyperactivity, and conduct, emotional and peer problems—at age seven.

The study then analyzed two sub-groups of children within the overall cohort. These were children with high ‘reactivity’ (children who were very easily upset and difficult to soothe in infancy), and those with low ‘persistence’ (children who struggled to persevere when encountering a challenging task). Both these traits are linked to poor mental health outcomes.

Across the entire dataset, children with a higher peer play ability score at age three consistently showed fewer signs of mental health difficulties at age seven. For every unit increase in peer play ability at age three, children’s measured score for hyperactivity problems at age seven fell by 8.4%, conduct problems by 8%, emotional problems by 9.8% and peer problems by 14%. This applied regardless of potential confounding factors such as poverty levels and maternal distress, and whether or not they had plentiful opportunities to play with siblings and parents.

The effect was evident even among the at-risk groups. In particular, among the 270 children in the ‘low persistence’ category, those who were better at playing with peers at age three consistently had lower hyperactivity, and fewer emotional and peer problems, at age seven. This may be because peer play often forces children to problem-solve and confront unexpected challenges, and therefore directly addresses low persistence.

The benefits of peer play were weaker for the high reactivity sub-group, possibly because such children are often anxious and withdrawn, and less inclined to play with others. Even among this group, however, better peer play at age three was linked to lower hyperactivity at age seven.

The consistent link between peer play and mental health probably exists because playing with others supports the development of emotional self-control and socio-cognitive skills, such as the ability to understand and respond to other people’s feelings. These are fundamental to building stable, reciprocal friendships. There is already good evidence that the better a person’s social connections, the better their mental health tends to be. For children, more social connections also create a virtuous cycle, as they usually lead to more opportunities for peer play.

The researchers suggest that assessing children’s access to peer play at an early age could be used to screen for those potentially at risk of future mental health problems. They also argue that giving the families of at-risk children access to environments which promote high-quality peer play, such as playgroups or small-group care with professional child minders, could be an easily deliverable and low-cost way to reduce the chances of mental health problems later.

“The standard offer at the moment is to put the parents on a parenting course,” Gibson said. “We could be focusing much more on giving children better opportunities to meet and play with their peers. There are already fantastic initiatives up and down the country, run by professionals who provide exactly that service to a very high standard. Our findings show how crucial their work is, especially given that the other risk factors jeopardizing children’s mental health could often be down to circumstances beyond their parents’ control.”