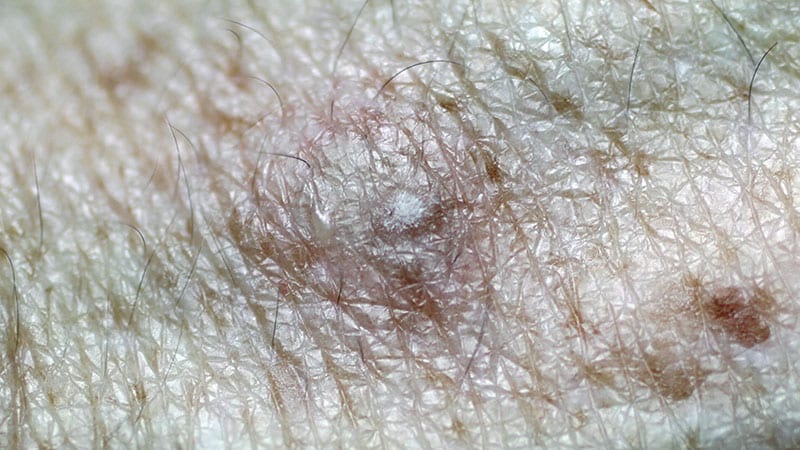 MILAN — Application of topical or both topical and oral polypodium leucotomos extract (PLE) was associated with significant reversal of adverse skin changes in patients with severe actinic keratoses (AKs) treated over 12 months, in a randomized, blinded study presented at the annual congress of the European Academy of Dermatology and Venereology.

At 12 months, the percentage of patients with a normal or almost normal honeycomb pattern when evaluated blindly with reflectance confocal microscopy (RCM) was about twice as great in either of the two groups that received PLE relative to those treated with topical photoprotection alone, according to Giovanni Pellacani, MD, PhD, discount advantage flea medicine chair of dermatology, University of Sapienza, Rome.

“In patients with severe actinic keratosis, the 12-month use of a PLE-based topical or oral photoprotection is associated with positive clinical and anatomical outcomes,” Pellacani said.

PLE, which is already commonly used in sun protection products, is derived from a South American species of fern and has been proposed for a broad array of dermatologic diseases. According to Pellacani, in vivo studies associating PLE with immune photoprotection make this agent particularly promising for severe AKs.

In this study involving two clinical research centers in Italy, 131 patients with photoaging and at least three AKs were randomized to one of three treatment arms. The control arm received topical photoprotection with an SPF of 100 or higher applied twice daily to all sun-exposed areas. The two treatment arms received the same topical photoprotection plus either a PLE-containing topical cream alone or a PLE-containing topical cream plus PLE in an oral form (240 mg) once daily

Patients were evaluated at 3 months, 6 months, and 1 year with several measures, including the Actinic Keratosis Area Score Index (AKASI) and the AK Field Assessment Scale Area (AK-FAS). They were also assessed with RCM. All clinical assessments and RCM evaluations, which assessed seven different parameters, such as honeycomb pattern, mottled pigmentation, and reticulated collagen, were performed by dermatologists blinded to the treatment assignment.

Complete data were available for 116 patients who completed all three evaluations over the 12 months of follow-up. On RCM, 50% of those receiving the oral and topical forms of PLE and 45% of those receiving topical PLE had normalization of the honeycomb pattern. These responses were significantly greater (P = .04 for both) than the 26% with normalization in the control group.

Although there were no significant differences in any of the other parameters evaluated by RCM, the improvement in the honeycomb pattern was accompanied by a 7% improvement in the AKASI score in patients taking PLE, either topically or orally and topically, while there was a 6% worsening (P < .001) among controls.

Over the course of the study, patients were permitted to take an appropriate therapy, such as imiquimod, cryotherapy, or 5-flourouracil if there was worsening of the AK-FAS score or if new lesions appeared.

The lower rate of new lesions or a start of a new drug over the course of the study in the group receiving both the topical and the oral formulations of PLE relative to those receiving topical PLE alone did not reach statistical significance, but Pellacani concluded that the addition of PLE to topical photoprotection without PLE seemed to provide a potentially clinically meaningful advantage.

Larger studies and longer term studies are needed, according to Pellacani, who noted that the substantial body of clinical studies associating PLE with benefit in a variety of dermatologic disorders has been weakened by the absence of well-designed studies that are adequately powered to guide clinical use.

This story originally appeared on MDedge.com, part of the Medscape Professional Network.