Temtem may give Pokémon a run for its money in some ways, but one of the biggest drawbacks for the early-access MMO comes down to the monsters themselves. Right now, there just aren’t enough of them, especially compared to Pokémon’s hundreds of options. But soon, that will change.

Crema published a content roadmap today, which outlines what the Temtem developer has in store for the rest of the year. In the immediate future, folks can expect updates to better balance ranked matchmaking, competitive auto-scaling, spectator mode, achievements, and improvements to in-game chat. Temtem will also add Clubs, which are its take on clans, banners and all. Trainers will also gain access to housing, which can be decorated with furniture, and eventually, useful items. 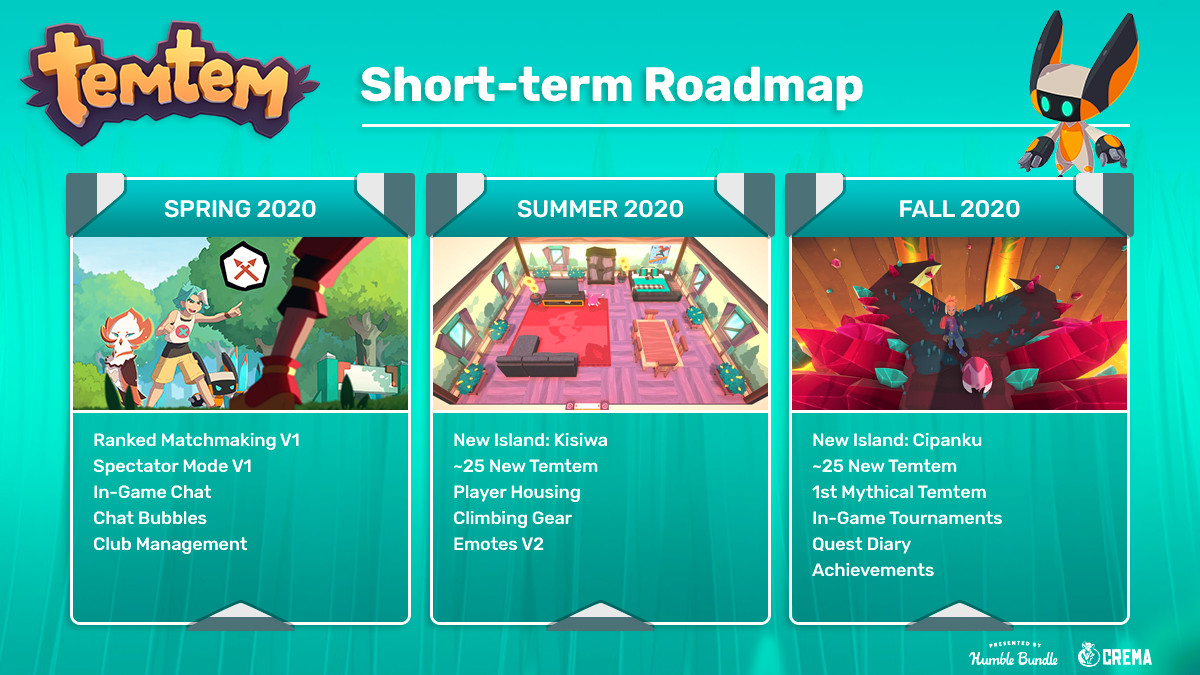 The most exciting bullet point, however, has to be the planned addition of around 50 new monsters, which will be doled out in the summer and fall of this year. As someone who grew tired of facing the same couple of creatures in any given area, the addition of more Temtem sounds like a godsend.

The best Temtem to catch early

Crema doesn’t list specific dates, just general timeframes, noting that some planned features may be delayed or tweaked along the course of development.

“Please, keep in mind that every detail discussed here is not 100% confirmed for the game,” Crema notes in the blog post announcing the upcoming additions. “During the game’s development cycle, ideas change constantly and stuff we like today we might not like as much tomorrow. So take everything in here not as confirmed facts, but more like the stuff we would like to include in the game.”

Players can also look forward to inclusions like more emotes, new locales, tournaments, and something mysterious called “the Dojo Wars.”

“The developers wish to reinforce this is just the beginning, as the world of Temtem is set to be supported for years to come,” Crema notes.

You can read a fuller explanation of some of the upcoming features here. Currently, I’m crossing my fingers that we’ll eventually get a surprise announcement for a full-fledged Temtem anime — one can dream, at least.