On March 10, Destiny 2: Season of the Worthy kicks off a new fight to save the Last City. In this season, players will work with Commander Zavala, Ana Bray, and the Warmind, Rasputin, to save the Almighty ship from crashing into the Traveler.

According to a post from Bungie detailing some new activities, players have a variety of ways to fight back. Guardians will arm Rasputin during the new Seraph Towers public events, and complete Seraph Bunkers, Legendary versions of Destiny 2’s Lost Sectors.

Separate from the new seasonal activities is the return of Trials of Osiris. Starting March 13, players can battle alongside two partners in this competitive, 3v3 mode. The mode returns every weekend, and players can earn exclusive rewards by participating.

Destiny 2: The history of Trials of Osiris

Destiny 2 will also see new Exotics in Season of the Worthy. Tommy’s Matchbook is an Exotic auto rifle that comes as part of the season pass. And The Fourth Horseman shotgun from the original Destiny will arrive sometime this season — likely through a new Exotic quest. In the original Destiny, The Fourth Horseman is a shotgun with four chambers, full auto firing, and a chance to grant bonus ammo on kills. 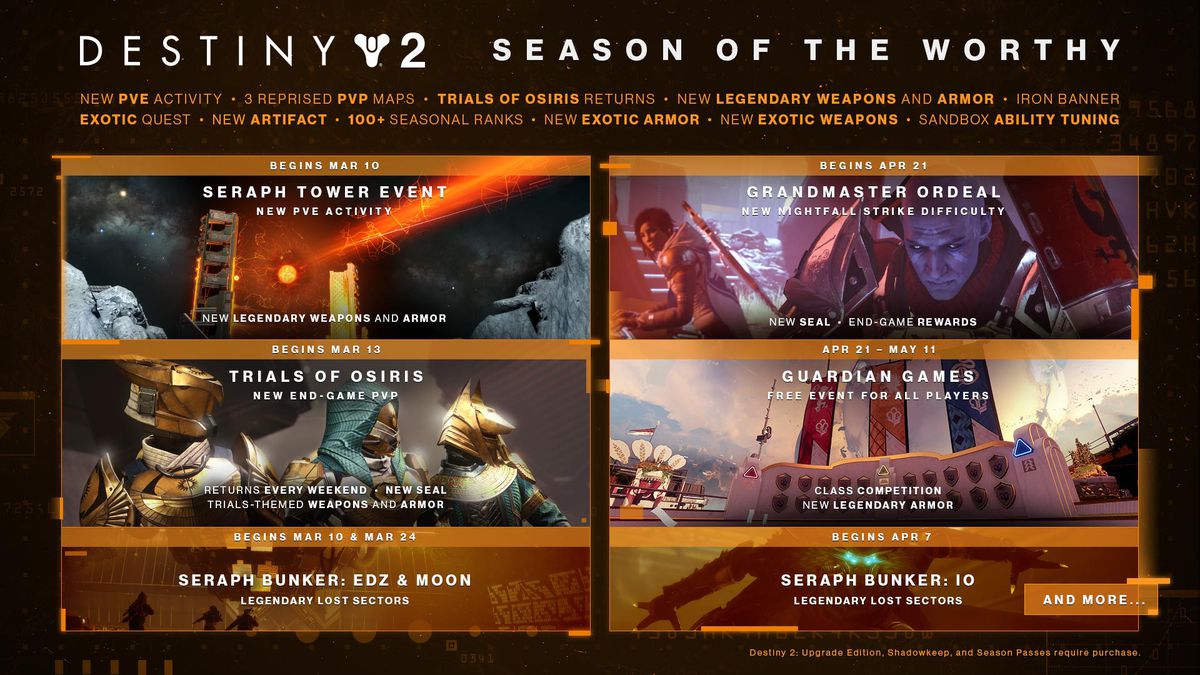 Also listed on Season of the Worthy’s schedule, there are two new items players don’t know much about. Grandmaster Nightfalls will come to Destiny 2 on April 21. Bungie describes it as a new Nightfall difficulty, with a new in-game title to earn, and end-game rewards. The new Guardian Games holiday, a “class competition” that offers new Legendary armor, looks to replace last year’s Revelry event.

As always, players also have a new season pass to rank up over the next three months.