When I told people that I was going to be reviewing Bakugan: Champions of Vestroia, I was met with responses such as, “I have no idea what that is,” and, “Oh, that’s still around?” Thus, it was clear to me that this new Bakugan video game – based on the popular anime that stopped airing in 2012 – was coming from seemingly out of nowhere. Truth be told, my only experience with the franchise prior to Champions of Vestroia was a random play session with my nephew and his action figure merchandise that stemmed from the television series.

However, after attending a preview event for the game, I was incredibly impressed by what I saw. The game looked to be fairly straightforward in its design – think Pokémon, but with a higher focus on monster brawls. Unfortunately, everything I saw in the preview footage was essentially what I experienced through the entirety of the game. Bakugan: Champions of Vestroia has some great ideas and is not without its charms, but its overall execution just doesn’t live up to the game that it could have been. 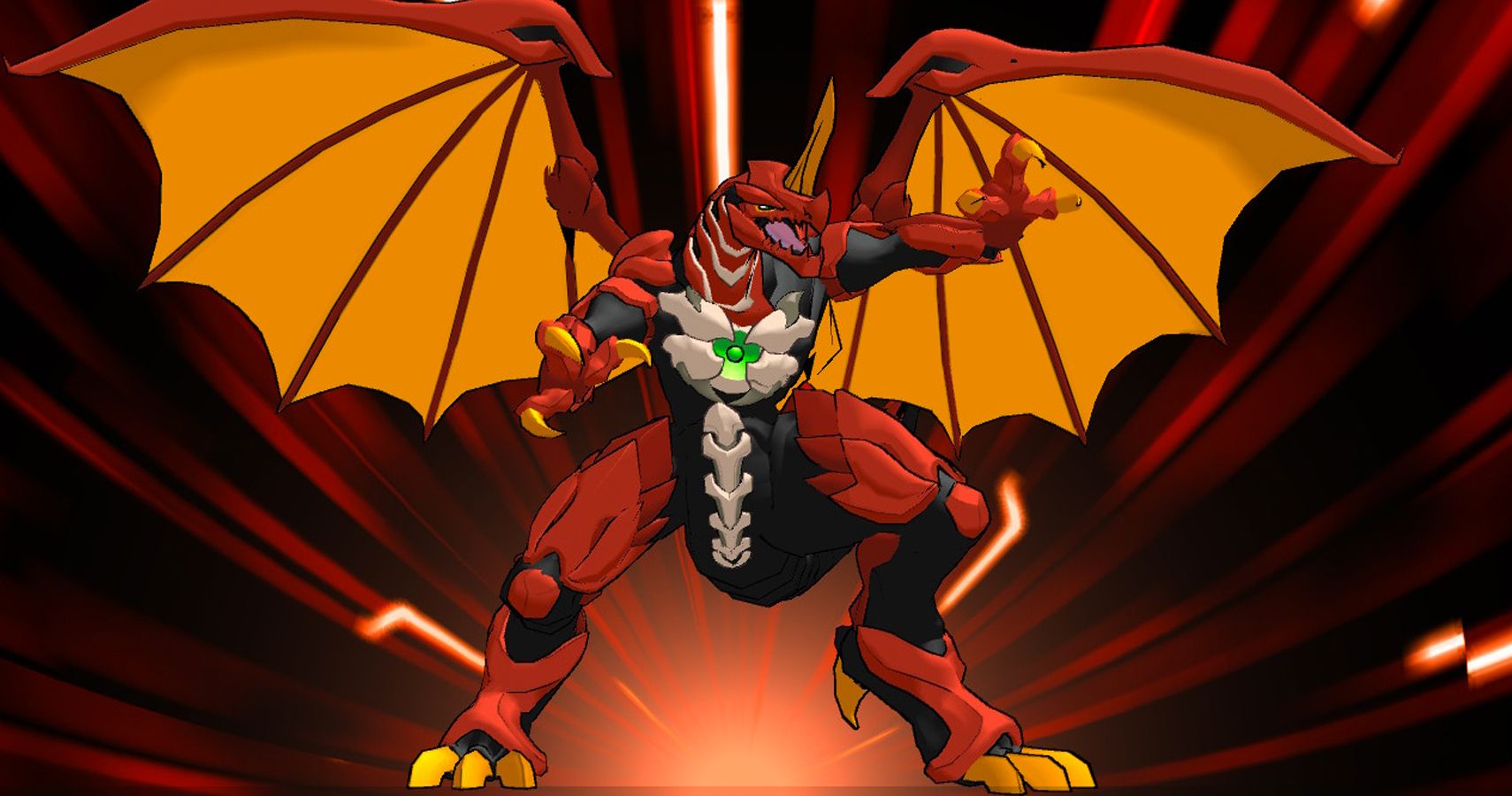 If you’ve played any sort of monster catching/battling title before, you’ll feel right at home – especially with the narrative found in the game’s story mode. Stop me if you’ve heard this one before: Your character (which you create yourself) lives in a wondrous world in which giant monsters called Bakugan exist and do battle for the trainers who possess them. Although you begin the game without your own Bakugan, you quickly manage to happen upon one that crash-landed in the forest. Choose the type of Bakugan you want from five different classes, and you’re off on your adventure to become the best… like no one ever was, one might say.

Bakugan: Champions of Vestroia’s story isn’t groundbreaking by any means – a notable trend that can be said about every facet of the game besides the actual Bakugan battles (aka “brawls). More on those in a second. The important thing to know is that Bakugan: Champions of Vestroia is a game that is directly targeted towards a younger audience, which ultimately may be the first step towards revitalizing the franchise. Unfortunately, that also means that it doesn’t have much to offer to long-time fans of the franchise or the monster-catching genre in general. 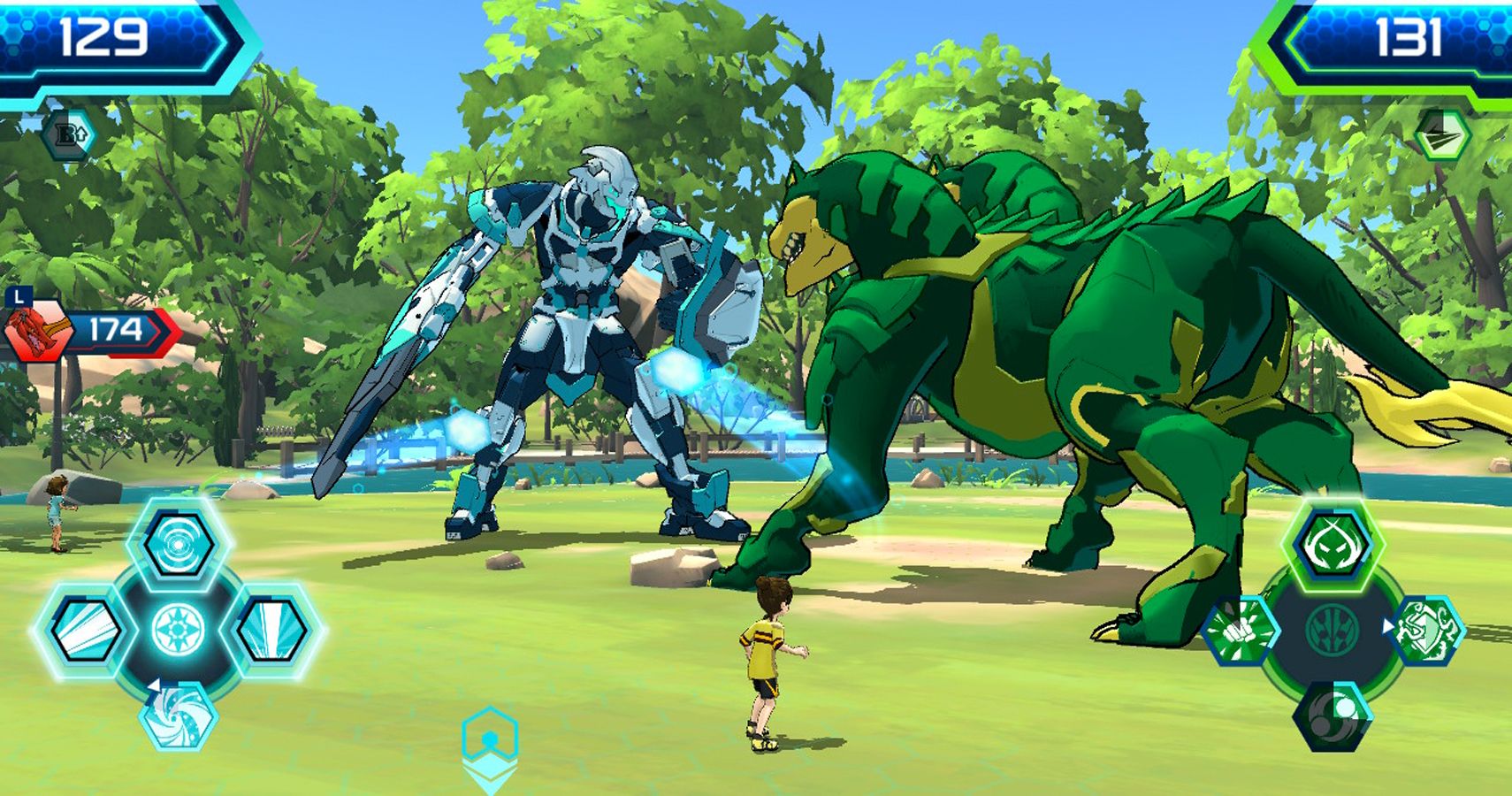 The 20-30+ hour single-player adventure allows you to collect the game’s 80 “different” Bakugan as you create your rotating team of three that can be used during brawls. I use quotes because, really, it’s more like there are actually 16 distinct Bakugan, each one coming in five different color options corresponding with each of the different types. This is probably the most disappointing thing for me with Bakugan: Champions of Vestroia. Similar-looking monsters are one thing, but different colored versions of the same monster are pretty underwhelming. Even the evolved forms barely change from their base design. In addition, this also provides a whole lot less of an incentive to continue playing after completing the story, unless you’re a diehard completionist who absolutely has to complete filling out your Bakulog.

Adding to the rudimentary nature of the game is its RPG mechanics. Each Bakugan can be outfitted with different abilities, which can be obtained through completing quests or from the abilities shop. There are enough ability options to keep brawls interesting, but Bakugan of the same type can essentially utilize each one, reducing the need to actually manage and change out members of your team. Granted, as someone who “sticks with what works” and doesn’t have a ton of patience for going fully in-depth with various RPG customization, I was fine with it, but I can understand that other players may be disappointed. Again, though, I think this was a purposeful design for creating a more accessible gameplay experience for younger players.

Bakugan brawls are what sets Champions of Vestroia apart from other monster-battling titles. Instead of turn-based combat, the massive Bakugan do battle wherever the trainers are, from the forest to a parking lot. The Bakugan “fight” as you run around the battlefield collecting the randomly-appearing Baku Cores that power-up your Bakugan enough to use their special abilities. Eventually, you’ll be able to snag other types of Baku Cores that power-up your Bakugear allowing you to more efficiently collect cores or even hinder your opponent from collecting them. 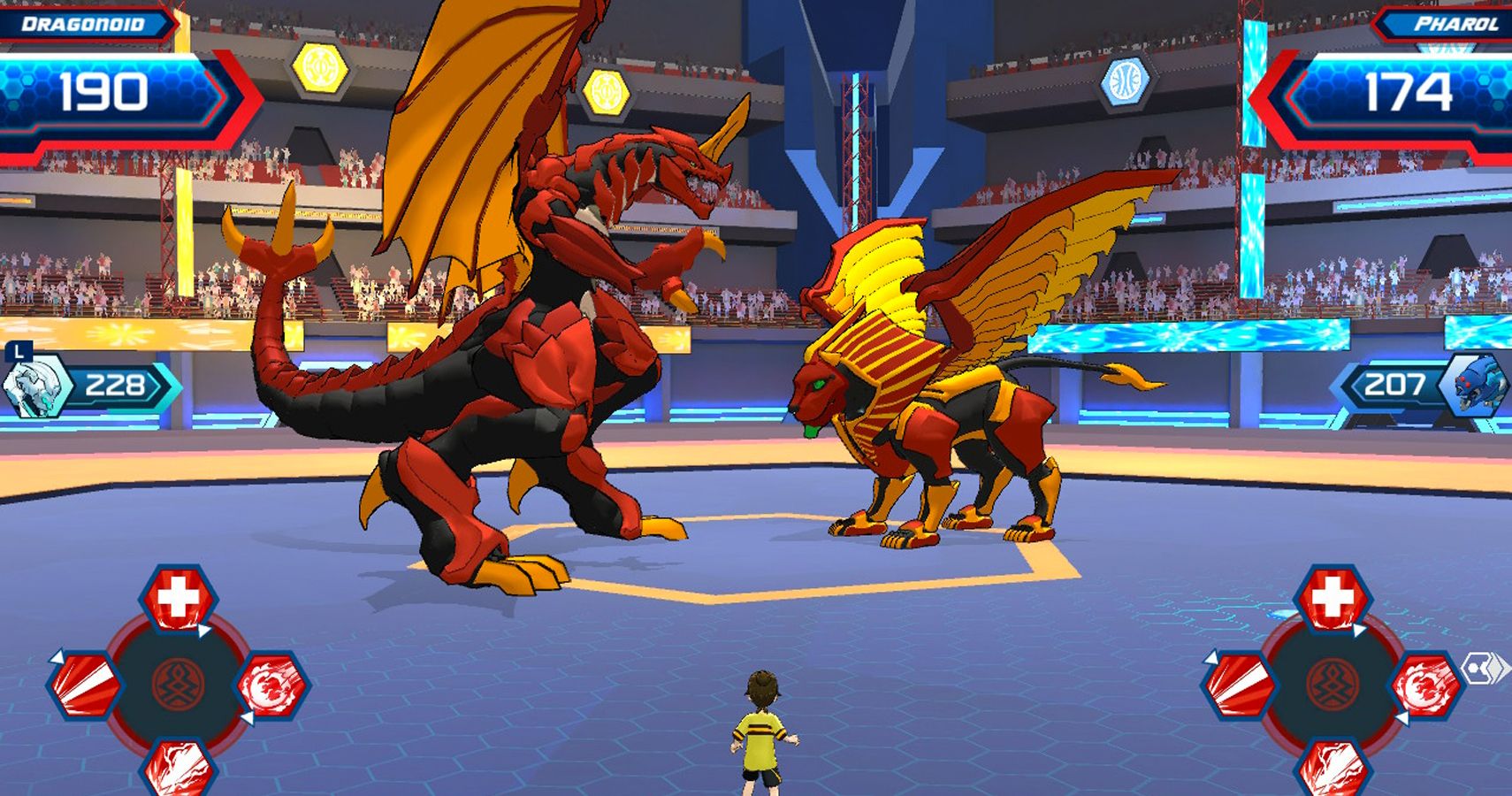 The battle system is a breath of fresh air from traditional turn-based combat and it was initially fun watching the special ability animations take place. Unfortunately, the novelty wore off once I began battling opponents with more than one Bakugan, which was only about an hour into the game. With three Bakugan being available to brawl in each encounter, battles can take up a considerable amount of time. There were more than a few occasions in which I’d spend anywhere from 30 to 60 minutes in back-to-back brawls. This required a high amount of patience and endurance to get through, especially with the randomness of where Baku Cores appear. Some battles feel very lopsided in terms of Cores being placed closer to my opponent, which is frustrating, as is the fact that you can’t skip the attack/ability animations. This extends into the online multiplayer component of the game, of which there is a surprisingly high community of players. All of that said, the more interactive battle system is, at the very least, a good way to keep younger players engaged.

The rest of Bakugan: Champions of Vestroia is about the same in terms of its simplistic design. Whereas I was expecting a more robust open-world, I mostly run around a stagnant, boring world filled with mind-numbing sidequests that I avoid if I can help it. The music and audio design doesn’t feel as fleshed out as it could be. Character dialogues (and the characters themselves) lack in personality and excitement. But if I were a ten-year-old kid, I have no doubt that I’d be absolutely captivated with this Bakugan-filled world.

NEXT: Dirt 5 Review: A Little Dirt Never Hurt Anyone 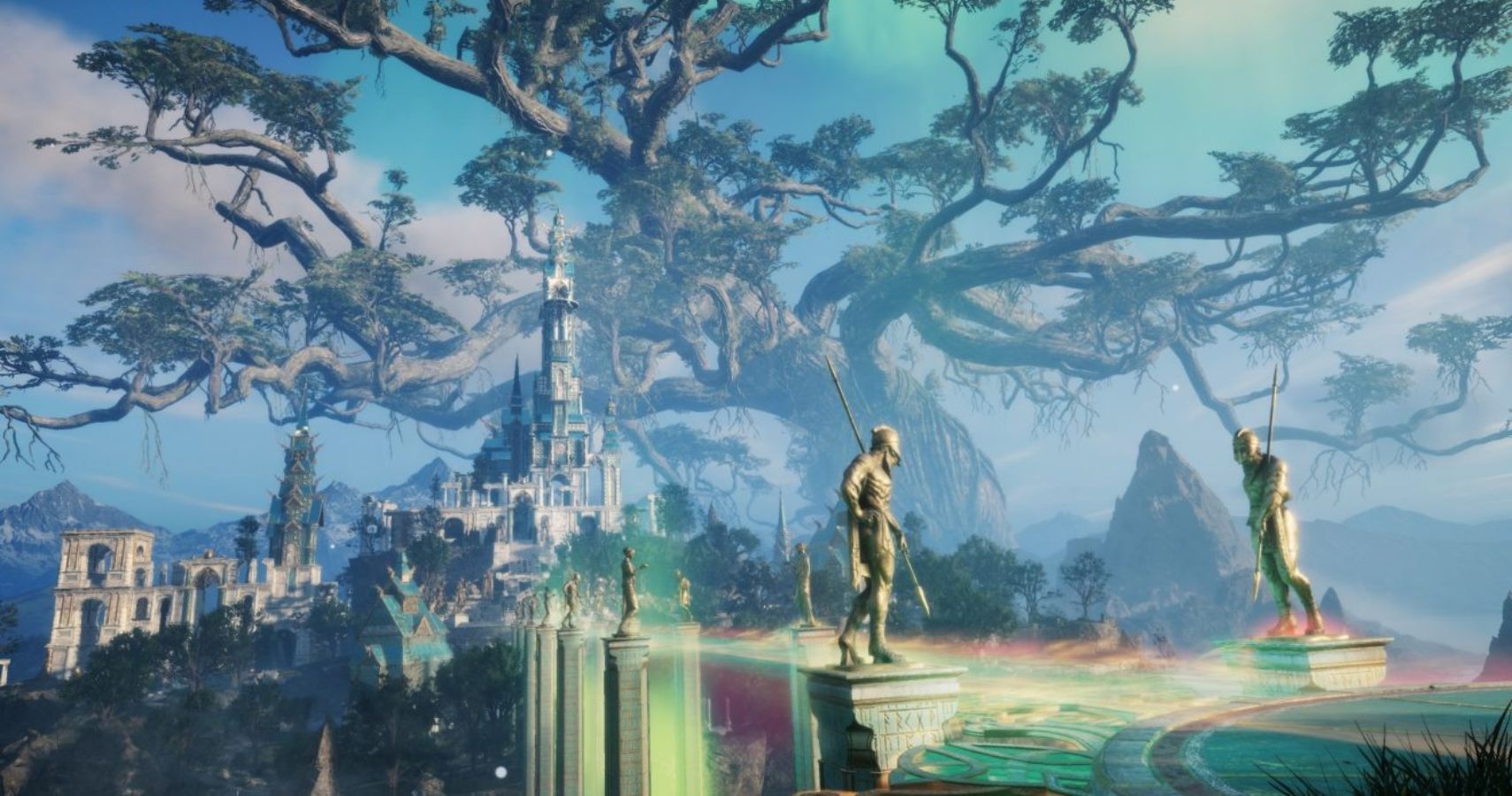 Related posts:
11/05/2020 Reviews Comments Off on Bakugan: Champions of Vestroia Review: For The Younger Crowd
Hot News
The Sims 4: Snowy Escape: Lifestyles Guide
Complete the ‘Shoot and Kill’ camo challenge in Black Ops Cold War
PS5 Users Are Customizing Their Consoles With Retro Logos
From 145,000 net worth lead to champions – Elephant win the China Dota2 Pro Cup Season 2
Elephant set new networth record in the history of competitive Dota 2 with 154K lead over EHOME
Recent Posts
This website uses cookies to improve your user experience and to provide you with advertisements that are relevant to your interests. By continuing to browse the site you are agreeing to our use of cookies.Ok