There’s no denying that Final Fantasy VII Remake is a gorgeous game. That’s kind of the whole point. Square Enix wanted to do the timeless story justice by rendering Cloud, Tifa, Midgar, and everything else in brilliant HD. Or maybe the company just saw a chance to cash in on that sweet, sweet nostalgia. Whatever the case, we now have a version of Final Fantasy VII that ditches all the blockiness for a more realistic look.

Likewise, the story of FFVII Remake does its best to flesh out the world and its people. Minor SPOILERS ahead, but players get a much more ground-level view of Midgar. We see the people of the Sector 7 slums go about their days – street vendors hawking their potions and kids playing in a playground made of construction scraps. A brief trip to the upper-plate shows the quiet, quaint suburbs of the average Shinra employees. Just like in other Nomura Final Fantasy games, great attention is paid to how people actually live in these fantastic worlds.

And then Cloud goes to sleep. 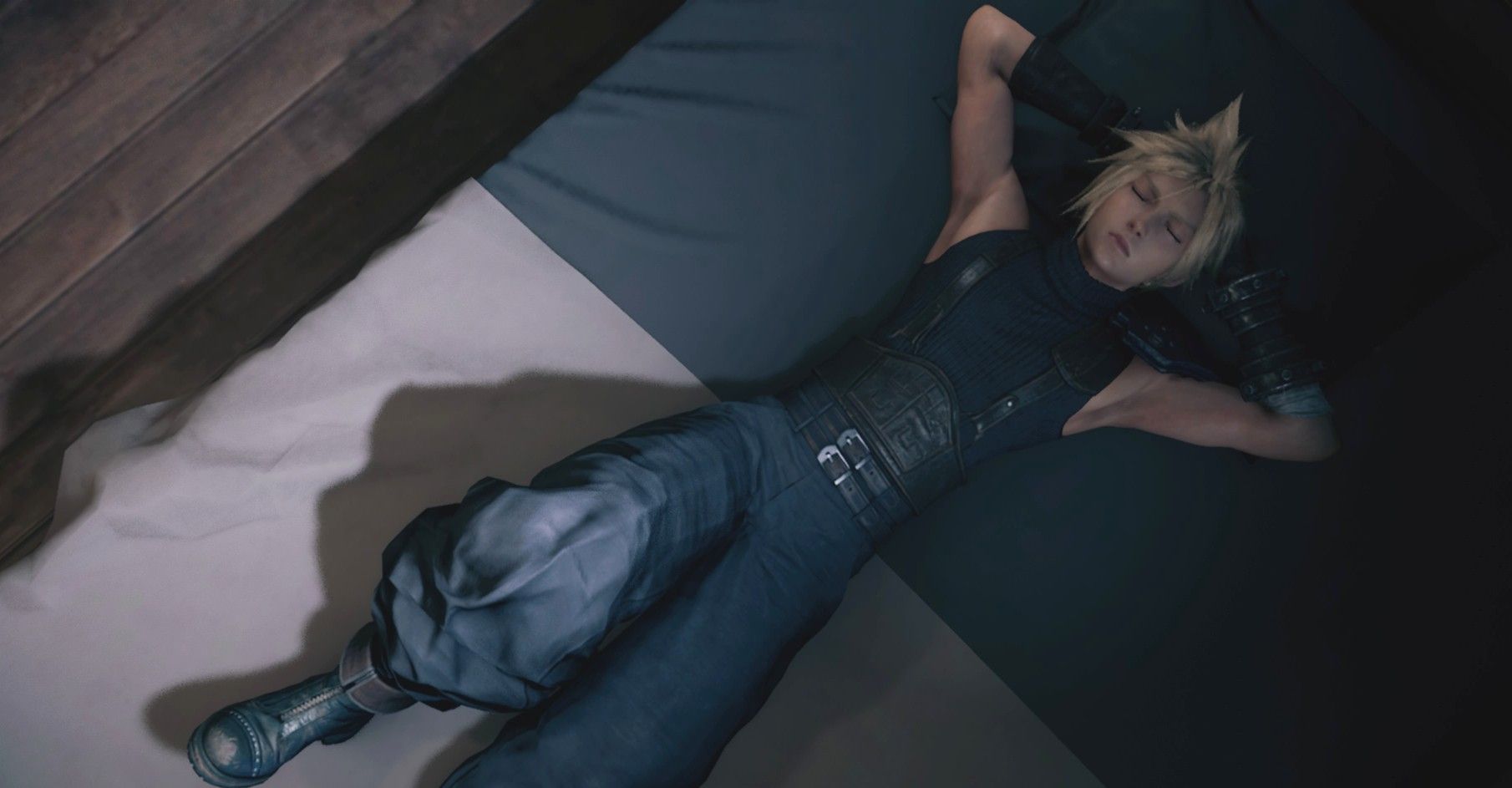 After the first Mako reactor job, Cloud is exhausted. He’s gone through a day of non-turn-based battles, tutorials, and Barret’s berating. When Tifa sets him up with a modest room, he hits the bed right away. Without even taking his shoes off.

In a scene right after, Cloud is awoken by a nightmare. The player sees him sleeping on his side. On the side with the shoulder pad. The metal shoulder pad that’s famous for having several screws sticking out of it for no discernible reason.

To be fair, Tifa explicitly mentions that Cloud came without any luggage. He’s a dirt poor mercenary just back from his first gig, and he hasn’t even been paid yet. So he can be excused for not owning a nice bathrobe or comfy sweatpants. But can he not at least remove the bulky metal shoulder pad and gauntlet?

Naturally, in the grand scheme of a great game, this is a trifle of a complaint. But Cloud’s silly sleeping habit dispels the illusion for a moment, which is a shame when the rest of Midgar life is so painstakingly established. Forget putting Cloud in the right dress, the man desperately needs some pajamas.

Related posts:
04/10/2020 Reviews Comments Off on Can We Please Get Final Fantasy VII Remake Cloud Some PJs?
Hot News
Uniliga – Abstimmung zum “Tor des Monats Juni” – Uniliga
Von Reforged bis Crucible – Das sind die grössten Esport-Flops – ESPORTS
VALORANT – Riot arbeitet an Änderungen zum Top-Rank Radiant – Valorant
Forget GTA 6, this new PS5 and Xbox Series X game could be the next big thing
Are early rotations from mid heroes more beneficial in Dota 2 patch 7.27?
Recent Posts
This website uses cookies to improve your user experience and to provide you with advertisements that are relevant to your interests. By continuing to browse the site you are agreeing to our use of cookies.Ok