The developers behind Dungeon Defenders: Awakened promised a return to form for the series following a massively successful Kickstarter campaign, but as of right now, we can’t recommend the early access title to anyone but the most masochistic. The bugs, and even some of the design choices, are extraordinarily painful.

It isn’t at all uncommon for a new game, early access or otherwise, to experience some issues at release. Typically, new multiplayer games will suffer major server issues during the launch window. Temtem and Wolcen: Lords of Mayhem both dealt with servers crashing and long queue times during their recent launch weekends, as a mass of new players started playing the game at the same time.

Despite a few days of frustration at the beginning, both of those games have managed to stabilize their servers and deliver a worthwhile experience to their players. These are feature-incomplete games, as all early access titles are, but the foundational quality of design and general functionality makes them a lot of fun to play. Dungeon Defenders: Awakened isn’t suffering from a “rough launch” the way those games did, and I’m worried its problems go much, much deeper.

Dungeon Defenders: Awakened has bugs so bad it makes me wonder if they haven’t been added intentionally as some sort of torture device or social experiment. After playing the game for a few hours on launch day, I closed it down and returned to find my save progress had been completely wiped. After doing some research, I learned that this phenomenon is A) happening to almost everyone and B) only happens the first time you play. At the time, I figured it is what is and pressed on, but things only got worse from there.

In the group of three I’ve been playing with, one player consistently loses all of the experience earned and gear he collected throughout an entire stage. It happens about every other stage, and looking online, it looks like it’s happening to a lot of players. Dungeon Defenders is about level progression and loot collecting, so losing your drops on XP after every other level makes the entire experience feel like a big waste of time.

There’s also another bug that makes me feel like pulling my hair out. In every stage, there are hundreds of pieces of gear that drop. Almost all of it is useless and really only needs to be picked up if you identify it as an upgrade. The game is supposed to auto-sell everything you don’t pick up at the start of each new round to save you time and let you focus on building and repairing your towers between waves rather than tediously walking around to pick up every single piece of junk armor on the ground. Instead, the game sells one piece and deletes the rest. If you don’t pick up every piece of gear one by one, you’re missing out on a ton of money you need to upgrade your good gear.

Those are the truly offensive problems, but there are countless frustrating ones that just build-up and build-up until you can’t take it anymore. Sometimes you don’t get any currency to build or repair at the start of a new map. Sometimes you don’t attack when you click. Enemies often attack without animating making you wonder why you died. Sometimes you just fall over dead for no reason. Sometimes enemies get stuck inside walls and the wave won’t end until you find them. Setting the server to private doesn’t stop anyone from entering your game. And, my favorite one: the health of your turrets will change depending on how far away from it you are. Sometimes one looks almost dead until you get close enough to see its at full health. Other times, one looks full health at a distance but is actually almost dead.

The Bugs Aren’t The Only Problem

If you want to know what the character’s abilities are, the only way to check is to make a new character and read them on the character select screen. If you want to look at the stats on your turrets to see which ones are doing all the work and which ones need to be repositioned, you better be the host of the game because no one else can see any numbers. Even the level up screen has information that’s impossible to parse. The Rune of Fortify upgrade increases the duration of certain traps. Which traps? Who knows. 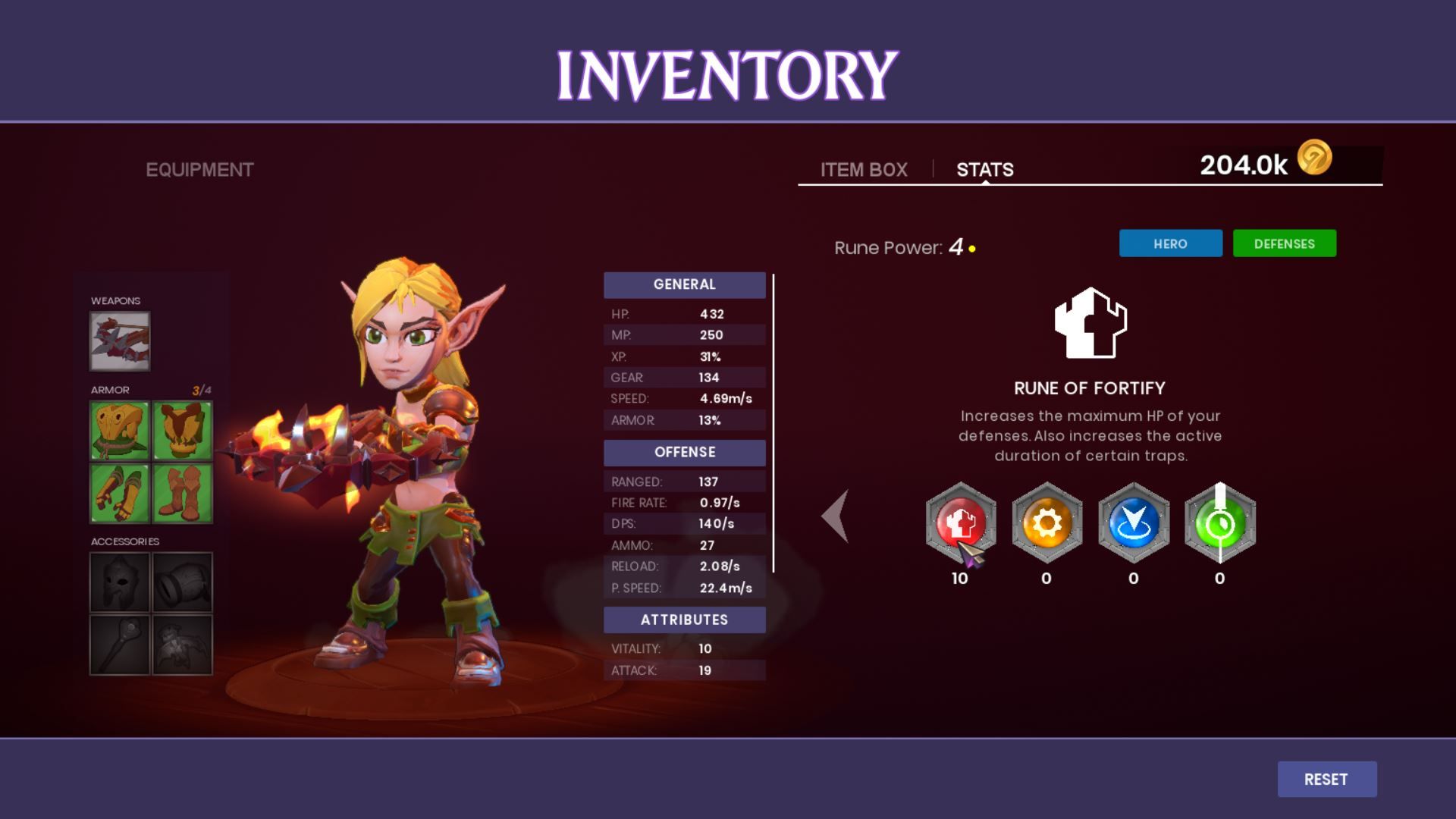 I don’t like the way every character earns the same experience no matter which one you play. I don’t like that you can switch characters instantly during build phase, making specializing and team composition completely irrelevant. I  also don’t like that playing on harder difficulties rewards you with upgrades that are 10-30 levels higher than your current level almost exclusively. Damnit, I don’t like this game right now.

It’s Too Soon To Tell, Obviously

Early access is early access and the game certainly has a long way to go. The most discouraging thing is finding out on Reddit that so many of these issues, such as losing XP and gear between stages, have been a problem for players since the beta. That’s a bug that makes the game unplayable as far as I’m concerned and, apparently, has been an issue for some time.

The game has received a couple of patches this weekend and some issues are being resolved already, so it’s possible the first-character-wipe has already been dealt with.  I’m a big fan of this series and I sincerely hope that it comes together eventually. Chromatic Games nearly doubled its goal on Kickstarter last year. However, I recommend players wait and see what shape the game is in in a couple more months before diving in.