GameStop as a company, and a concept, is not in the best place right now. The Holiday 2019 earnings were terrible, stores closing en masse, and recent reports show employee morale is hitting a dangerous low. Many consumers cite the chain’s pushy sales tactics as a reason to never visit again, combined with the ever-present convenience of online services like Amazon. This growing distrust of GameStop in turn fuels several “this is the end” articles, which only exacerbate the situation. But for those in charge of innovation at the company, this is the perfect time to experiment.

The Worst-Kept Secret In Gaming, Revealed 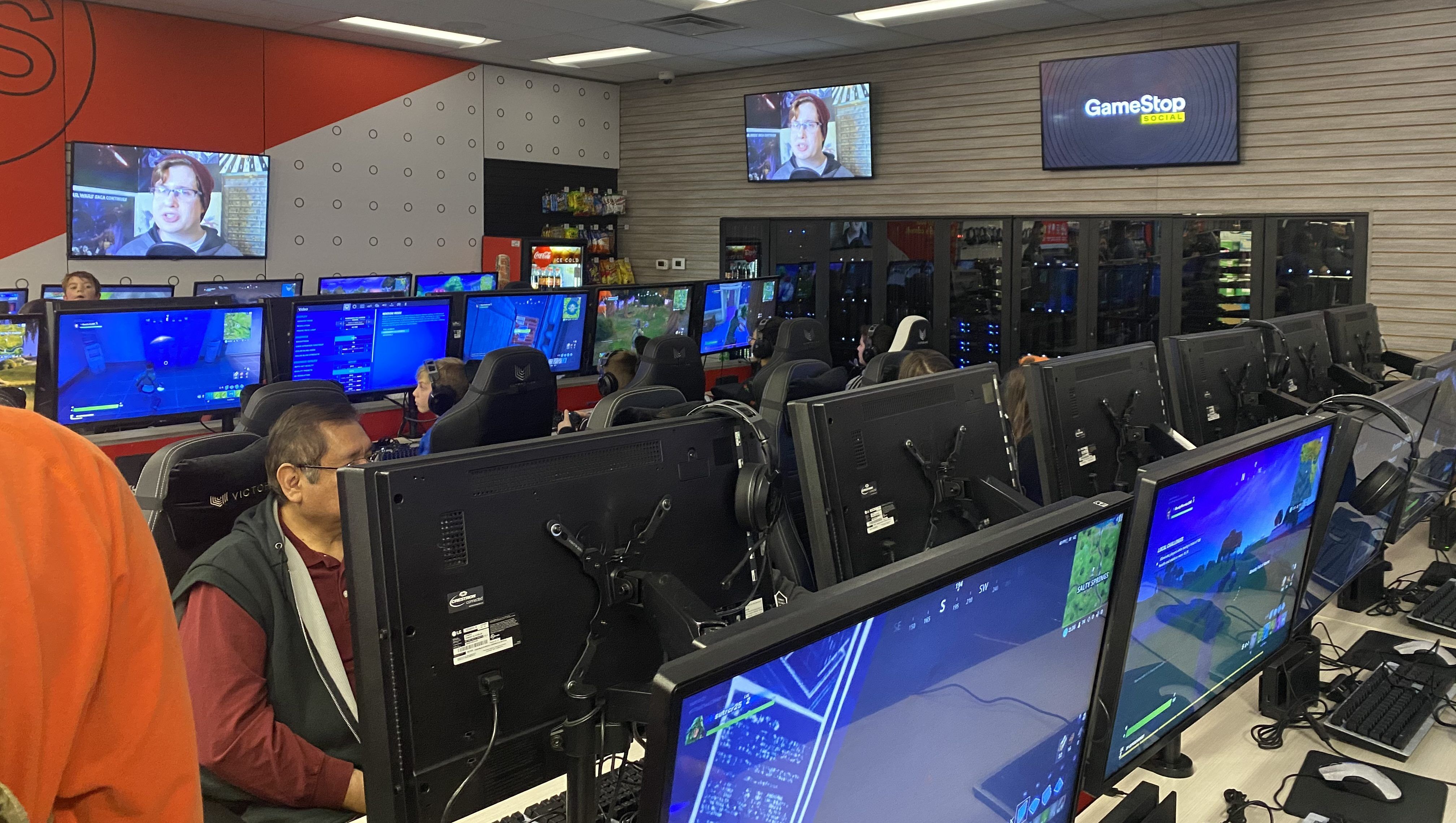 GameStop invited TheGamer and several other news outlets and influencers to Oklahoma to see its GameStop 2.0 stores. The reboot of several stores in the area wasn’t exactly a secret – a leaked video was spread as far back as September 2019. But GameStop wanted people to see its remodeled stores in person and after a few months of operation.

Alongside many key changes – a bigger focus on tabletop, dedicated retro stores, and less Pop! figures, among others – is a larger freedom for the local community to shape the direction of their GameStop. To that end, GameStop revealed the stores only after the gamers of Tulsa and Pryor, Oklahoma had some time to voice what they wanted to see in their GameStops. For the largest store, Tulsa’s GameStop Social, that meant a lot of Fortnite. 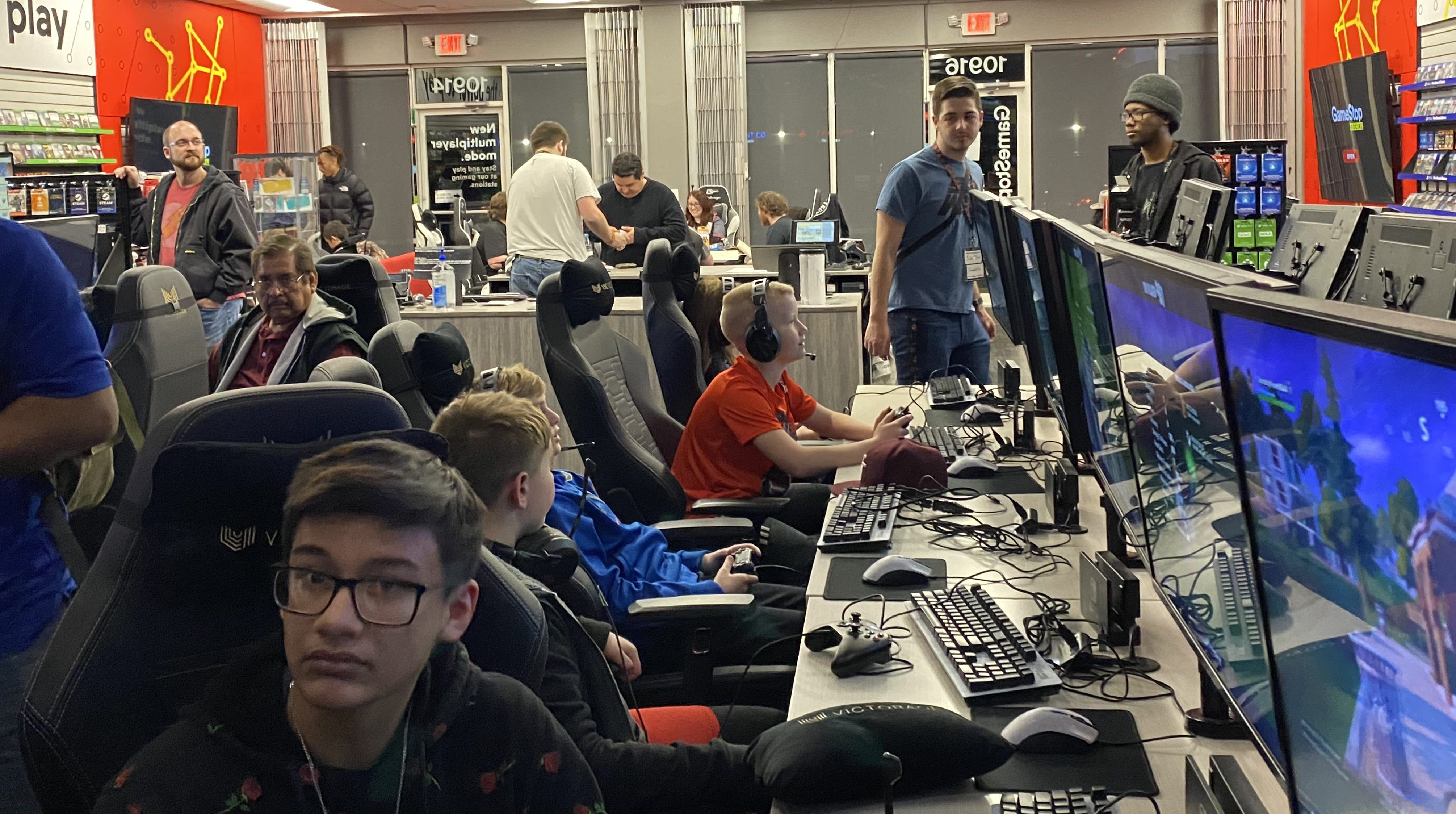 It happened to be “Fortnite Friday” when we were brought in, and the event pretty much catered to the stereotype. Young gamers, none of which could be older than 13, took up most of the 36 gaming stations. The store has a network of PCs, PS4s, Xbox Ones, and Nintendo Switch docks hooked up to the six rows of TVs. For a fee ($5 an hour as of now), a customer can sit at an empty TV and play any of the games on an extensive list. Fortnite, however, is eternally on each and every system. “If you don’t have Fortnite, you’re dead,” said GameStop Head of Innovation Zach Shor.

It’s all run through a server, meaning that every platform has access to the latest version of each game instantly. There was an incident during the visit where one station got caught downloading a massive Call of Duty: Modern Warfare patch, but the plan is to have that all happen in the morning before stores open. The system worked well during Fortnite Friday, with about 20 kids all playing online without any sort of lag. And aside from Fortnite, the server allows a large amount of games to be loaded onto a console with the poke of a tablet. One mother indulged in Tetris 99 while her child caught a ride on the Battle Bus.

The GameStop Social store also had a table at the front surrounded by comfy gaming chairs. Here is where the largest adult presence was felt, as it was also Dungeons & Dragons night. Shor explained that every one of the GameStop 2.0 stores had a similar tabletop setup and a weekly D&D night. Some stores even hire associates specifically to be Dungeon Masters. But none of this is locked in. If the customers show more interest in “Mortal Kombat Monday” or Magic: The Gathering, the staff has the power to add those events. 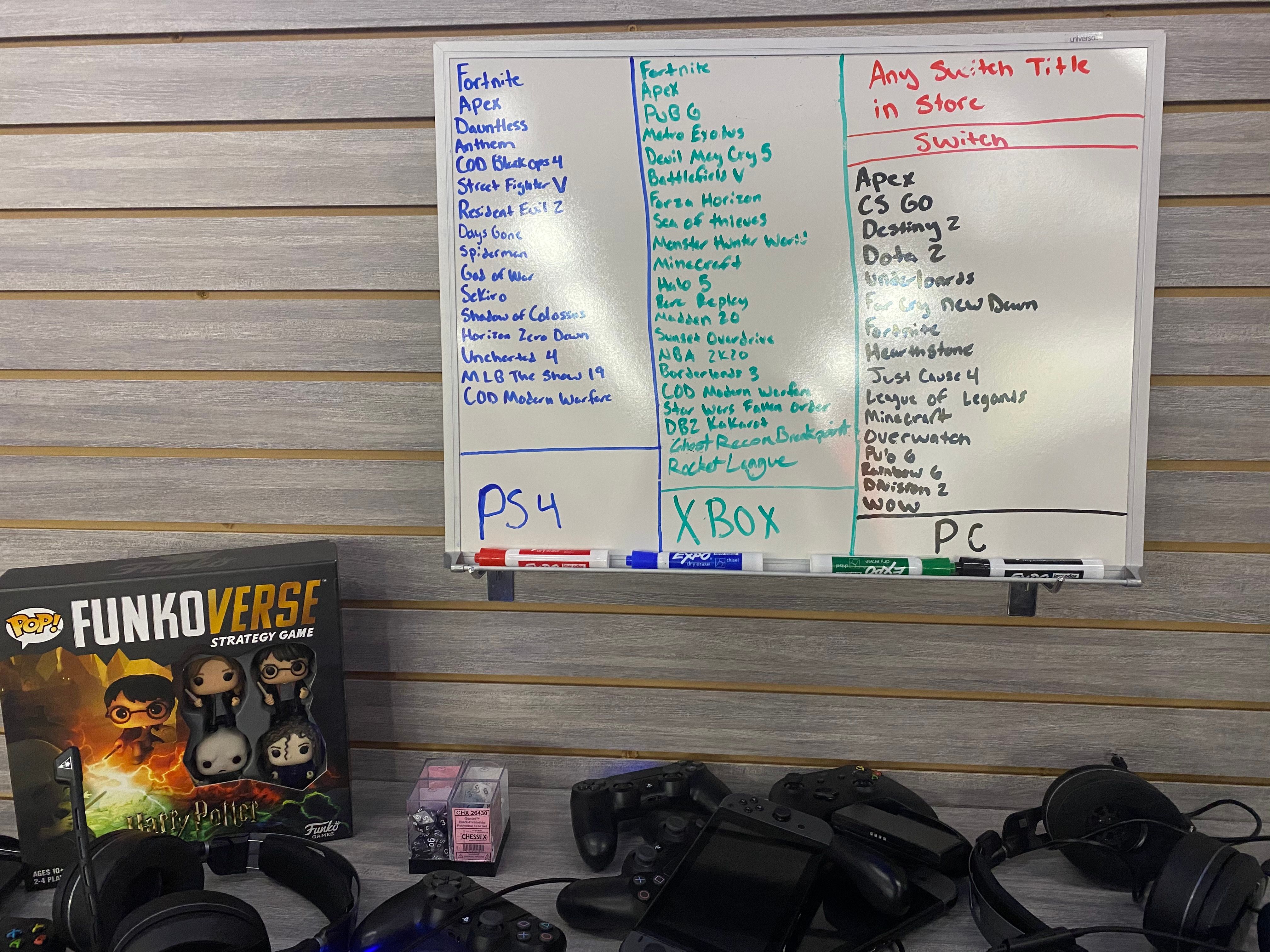 The Church Of Gaming

GameStop Social is one of four versions of the 2.0 reboot. It’s the largest by far, and the 11 other Tulsa area stores follow its general layout. The stores all take a more streamlined approach with games up front, along with a couch facing a big, playable TV. Collectibles still have a place, but that place is no longer randomly stacked near the registers. In fact, the counters are totally clear of all blind bags, Pop! figures, and other attempts to provoke a last-minute purchase. They now sit in the middle of the store so that associates can be all over the place facilitating D&D or Fortnite tournaments and still be available to do business.

The second class of stores, small to mid-sized stores, look just like GameStop Social but with only 12 gaming stations in the back. The D&D table sits in the middle of them. The third, a tiny mall store, is the pop culture store. This is where the bulk of the Pop! figures go, alongside premium collectibles like the life-sized Infinity Gauntlet. It was the fourth and final store type, GameStop Retro, where I saw the promise of GameStop 2.0 come alive. 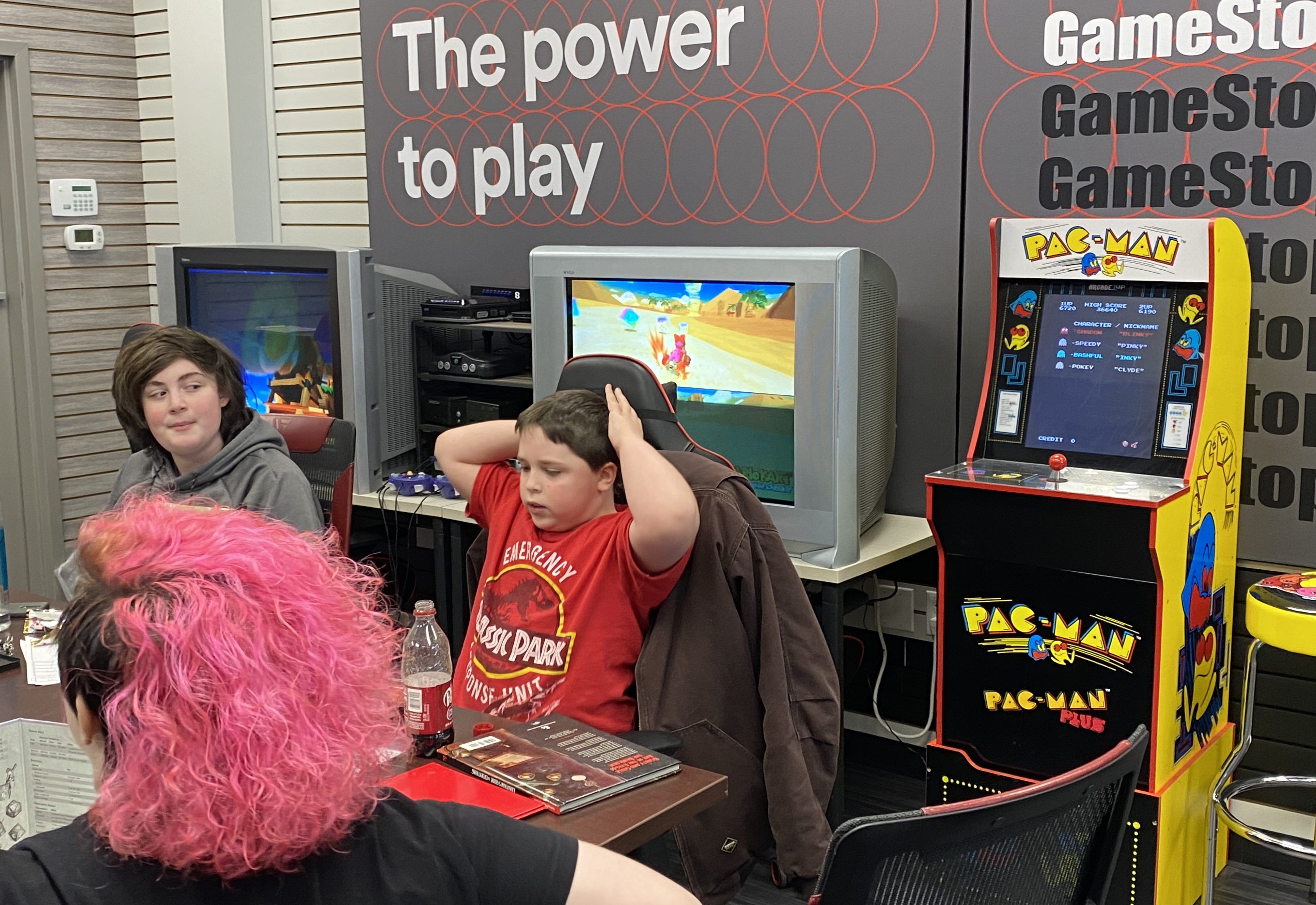 GameStop Retro mostly follows the GameStop 2.0 model. Games are up front along with t-shirts and trading cards, registers are in the center, and the back has the table flanked by gaming stations along the walls. Except its product comes from before the age of microtransactions. The shelves still display current generation games, but a collection of drawers under them contain PS2, GameCube, and even Dreamcast games. Customers can trade in their Switch for a Super Nintendo if they’d like. The gaming stations have giant CRTs and are hooked up to most of Nintendo’s old library as well as PS2/Xbox. However, it was the staff’s personal touches that gave it its charm.

The winner of the recent Mario Kart: Double Dash tournament had his name written on the whiteboard in a nice throwback to high score lists. The manager of this store was greatly attuned to what it takes to run a weekly D&D session. He made sure to have books, spell cards, and his own homemade dice towers available for players. One of the players was a little girl, maybe around eight years old. Shor told us how she shyly rolled her first d20 at the store as a reticent player. When I saw her, though, she was dressed in medieval regalia with elf ears. And no one was asking anyone to pre-order anything. 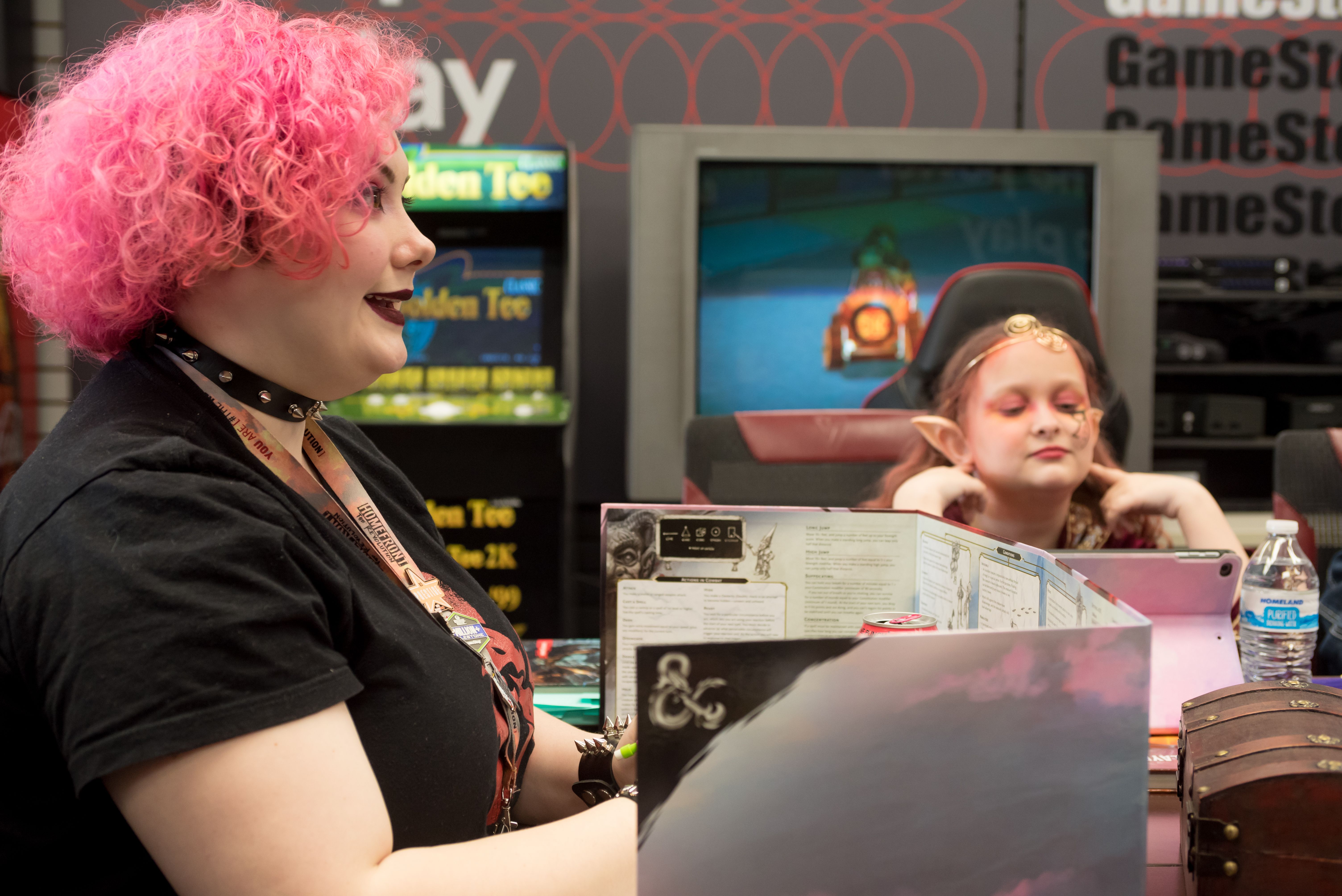 Re-focusing on customers seems like a no-brainer – the customers themselves have been pleading for a less profit-minded GameStop experience for years. But for those in charge of the GameStop 2.0 initiative, it’s not just about cleaning up, installing gaming areas, and being less pushy. Instilling renewed faith in the brand means turning it back into an essential place for gamers. Not a place that they reluctantly visit to get a collector’s edition they can’t get anywhere else, but a place to meet friends and enjoy the hobby. GameStop CCO Frank Hamlin likens it to hype given to E3. “I use this incredibly politically incorrectly,” he told us, “but if E3 is the Vatican, why is GameStop not the local church?”

The Local Church Is A Little Too Local

At this point, the congregation of the church of GameStop is limited to Oklahoma. Any questions on the future of GameStop 2.0 – including if it will expand – were met with a version of the same answer: This is an experiment, and the team is still collecting data.

“The kid’s just been born, and everyone wants to know where it’s going to college,” Shor said. He also admitted that, despite his pride in the stores and what they do for their communities, there are things he wants to change. GameStop 2.0 is still crawling, so it can’t be expected to carry the hopes of the brand on its back. 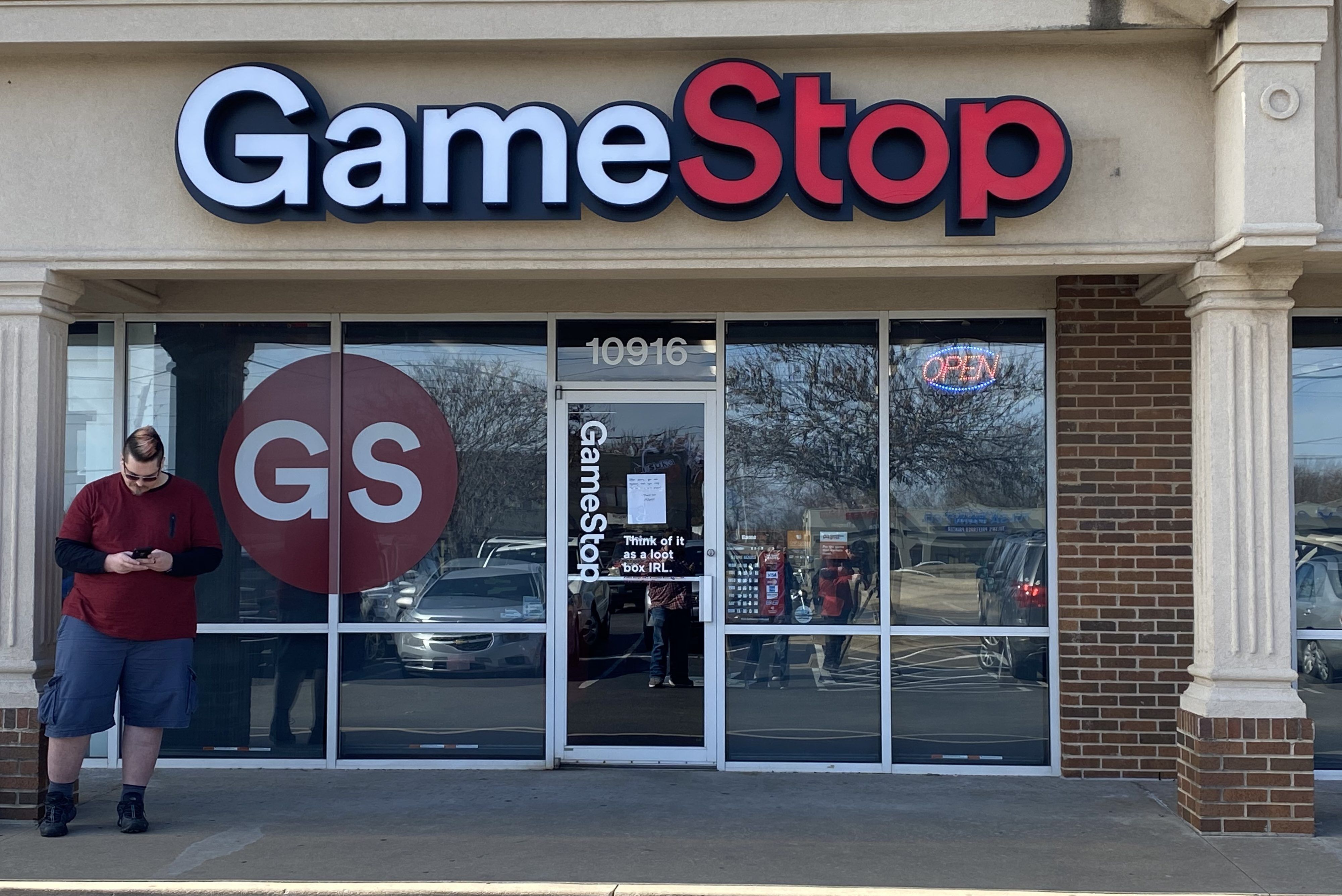 It’s probably better that GameStop takes its time rather than throw out a hasty, insincere rebrand. As they slowly plan, however, the bulk of gamers only become more entrenched in Amazon and online launchers. The answer might just be that GameStop shrinks into a more localized chain, serving areas like Tulsa where the average consumer still lacks stable enough internet for Steam.

The Store I Wanted 15 Years Ago

As a teenager of the early 2000s, I would’ve loved a store like this. Sure, LAN cafes were a thing then. But not in the Massachusetts town I grew up in. The first tabletop store opened later, in my college years. Even if those had come earlier, no local store has the GameStop-level resources it takes to be a simultaneous tabletop/LAN cafe. My parents still had dial-up, so the internet stability alone would have blown my mind.

Here in 2020, however, I’m an adult living in a city filled with gaming bars. I have two local board game stores and a comic book store that host D&D nights. Walking into the GameStop Social store was a “wow” moment for me. Even as I look back on it, I’m still impressed by the infrastructure that allows 36 units to play four gaming platforms all online simultaneously and reliably. But as soon as I think “I wish they would bring one of these stores to my city,” I remember that I probably wouldn’t frequent it. I can play online multiplayer games from the comfort of my own home for free. And my D&D community would never abandon the local store for a chain. 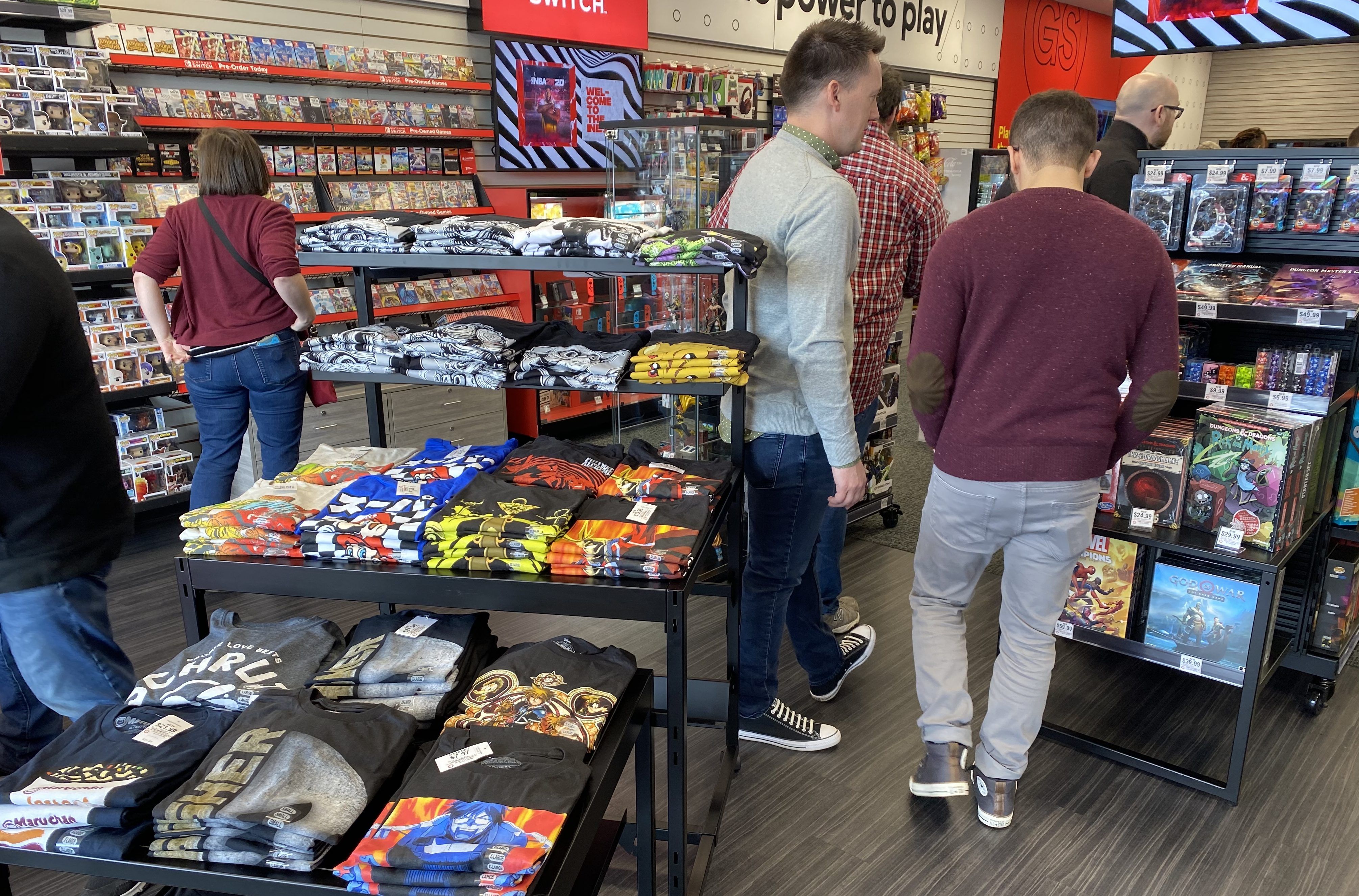 Hamlin and Shor had answers for these notions. Hamlin made great point that the kids of today don’t really gather to game. He noticed how his son and his friends would be hanging out at his house, playing basketball and watching movies. But when they decided they wanted to to play Fortnite together, the friends would ask for a ride home. After all, they each needed to have their own console. Hamlin found that amusing, separating to game together. It goes back to his church analogy, how congregating is important for a group.

Shor brought up his desire for GameStop to become a D&D “gateway drug.” People like the little elf girl would discover the game there, and then graduate to local hobby stores if they get hardcore into it. The Tulsa stores don’t sell mini painting kits or battle maps. Just the basic books, dice, and a place to play.

In the end I left impressed, but unsure if GameStop 2.0 even affects me as a consumer. The old GameStop, where I picked up Halo 3 at a midnight event and got destroyed at a launch tournament, might still be in there somewhere. And it could come back with retro games and D&D. Except I can’t participate because it’s coming back miles away, with no plans to expand anytime soon. Which is fine, because maybe I’ve outgrown the store. Let the teens of Tulsa, Oklahoma have Fortnite Friday.

Travel and hotel accommodations for the trip were provided by GameStop.