Hood: Outlaws and Legends tries to find the next big thing in multiplayer gaming by throwing a bunch of gameplay mechanics into a pot and hoping it all turns into a fine gumbo. It’s a PvPvE multiplayer title where you’re supposed to outwit A.I.-controlled enemies to steal some gold while also contending with human players who want that loot for themselves. It’s a cool concept that feels like it should lead to some interesting gameplay scenarios. Yet, due to Hood’s indecision on whether it wants to be a stealthy heist game or a full-on fight to the death, every match tends to devolve into the same chaotic mess that’s bound to leave you feeling less than merry.

Each match begins with you choosing between one of the currently selectable characters. As of right now, there are four heroes to choose from: Robin, John, Marianne, and Tooke. Each one has its own strengths and abilities. Robin and Marianne are your rogueish characters that specialize in ranged and stealth attacks. John and Tooke are your melee characters who are meant to protect the weaker stealthy heroes and deal heavy damage. Everyone has their own kind of weapon, special gear, passive trait, and ultimate ability. For example, Robin has his bow, a blinding flash bomb, the ability to tag enemies while aiming down his sights, and an explosive arrow. 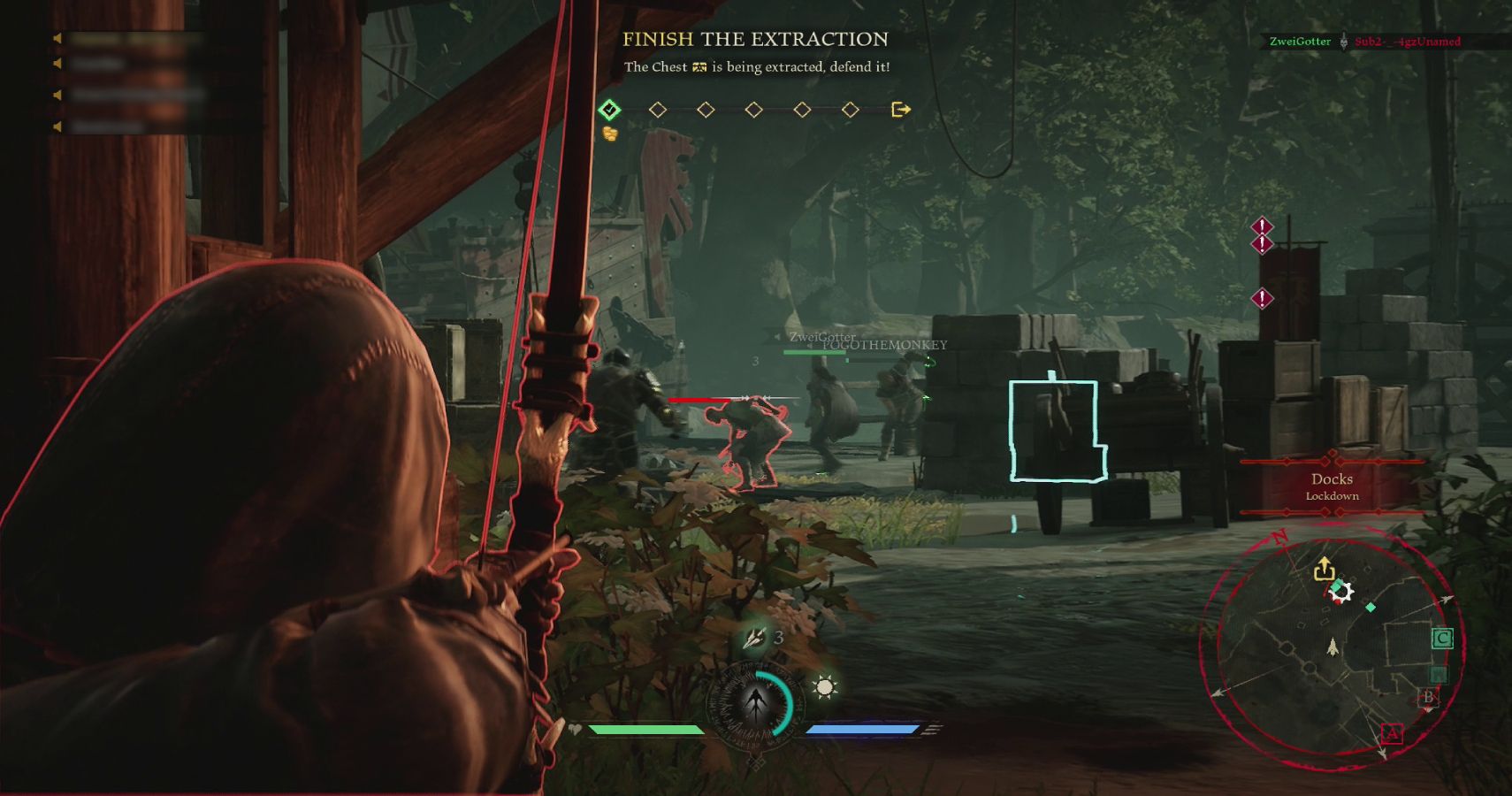 When the match begins, your team makes its way through the level while stealth-killing guards and capturing respawn points along the way. The first step of the heist is to pickpocket the key off of the Sheriff Of Nottingham (who is a god-like super knight who can’t be killed.) Once you have that, you find the level’s vault and open it up to steal a chest of gold. Then you got to lug that chest to one of the extraction points and place it on a winch. Crank that winch enough to extract the chest and your team wins. From there, you can decide whether to pocket some of that gold to buy new skins and perks or use it to level up your hideout – which acts as your hub between games – to unlock more skins and perks for purchase.

One thing that disappointed me about Hood was its lack of any sort of narrative. Aside from a cut scene or two that pays lip service to the tale of Robin and his merry men robbing the rich, there isn’t much in the way of dialogue or exposition. I suppose we all know the story of Robin Hood well enough to infer what’s happening here, but a little bit of a storyline running through these heists would have added some character to this otherwise bland world. 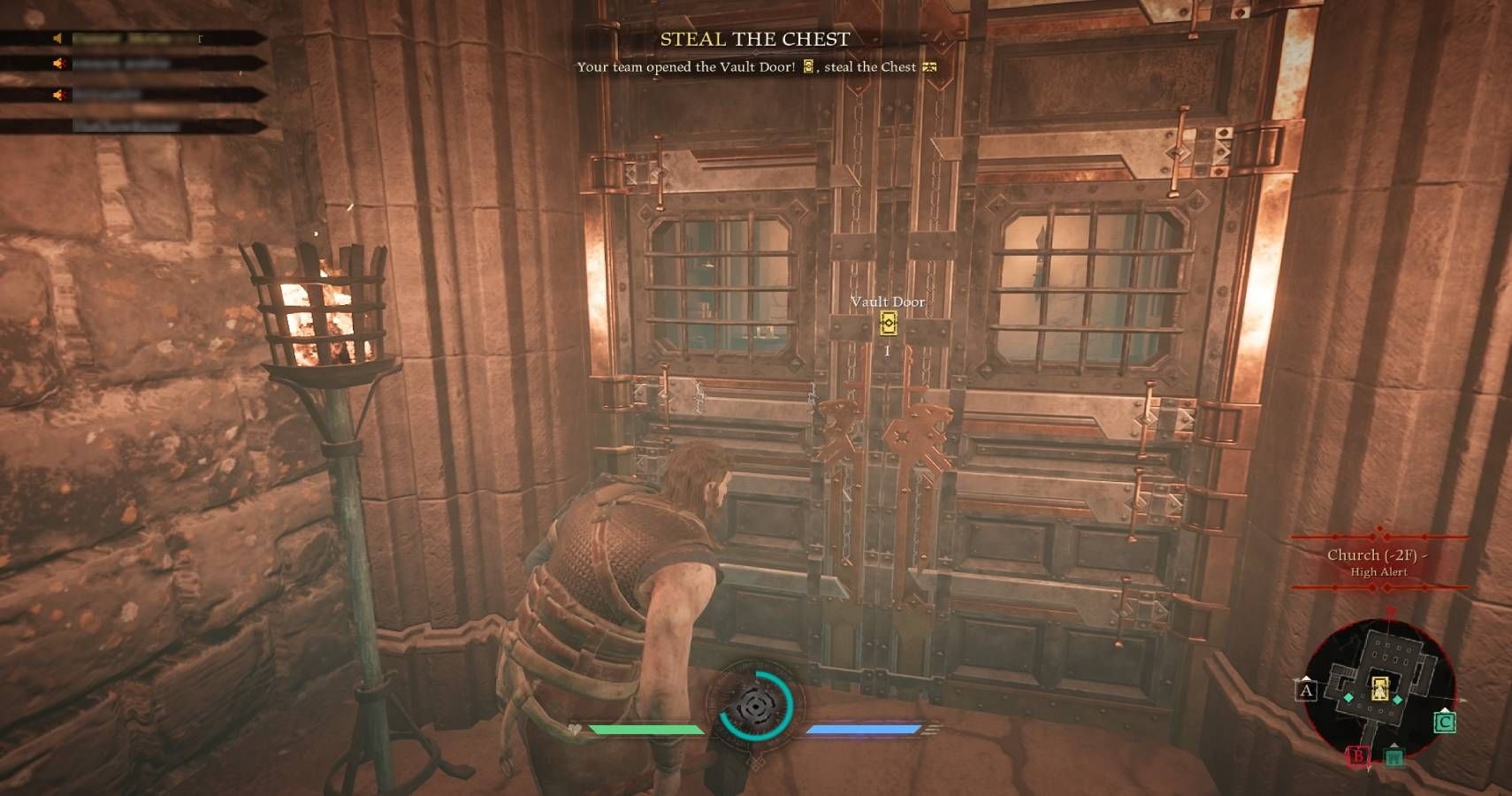 That feeling of blandness isn’t helped by the run-of-the-mill grim-dark tone. The main colors you’re going to see in Hood are grey, green, and brown. Even though there are a few different maps, every level looks like a flooded forest with an ominous castle in the middle. The heroes are humorless warriors with Northern English accents who wear lots of fur and war paint and seem like they were plucked straight out of Game of Thrones or Assassin’s Creed Valhalla. Hood also has quite possibly the most generic depiction of Robin Hood that I’ve ever seen. No Errol Flynn, no Cary Elwes, no Kevin Costner, not even a charming talking fox. Here, Robin is just some dude wearing Assassin’s Creed cosplay. It seems bizarre that the least interesting character in a Robin Hood game would be Robin Hood himself.

Hood is brimming with ideas, but perhaps uses too many of them at once. The problem is that there’s so much going on that all of the gameplay mechanics feel undercooked. Stealth is great at first, but it’s a slower way to get to the vault. This game is essentially a race to the finish between two teams, so everyone tends to give up on being sneaky early on and just start running instead. That leads to everyone fighting with the A.I. and each other. I hate to keep bringing up Assassin’s Creed, but melee and ranged combat feel like a lesser version of that series’ gameplay. Sometimes the fights could be pretty intense with some good combos and parries. But the majority of battles usually boiled down to whichever John can perform their running, jumping heavy attack first wins.

There’s a bit of a balancing issue present in Hood. I had initially assumed that teams were supposed to be made up of one of each character so you could make use of each of their strengths. Instead, you can choose as many of any character as you like. Based on what I’ve played, the meta seems to be to have at least two to three Johns on your team to ensure victory. Which makes sense since he’s kind of overpowered at the moment. He’s the easiest hero to learn, his attacks hit the hardest, he can crank the extraction winch better than anyone else besides Tooke, and he’s strong enough to lift up the heavy iron gates. He even has an explosive bomb with a decent radius that can blow up enemy players. John’s only downside is that he’s vulnerable to arrows to the head, but that only matters if the enemy team has a crack shot sniper. Or if they decide to be all Robins and let loose a barrage of arrows. 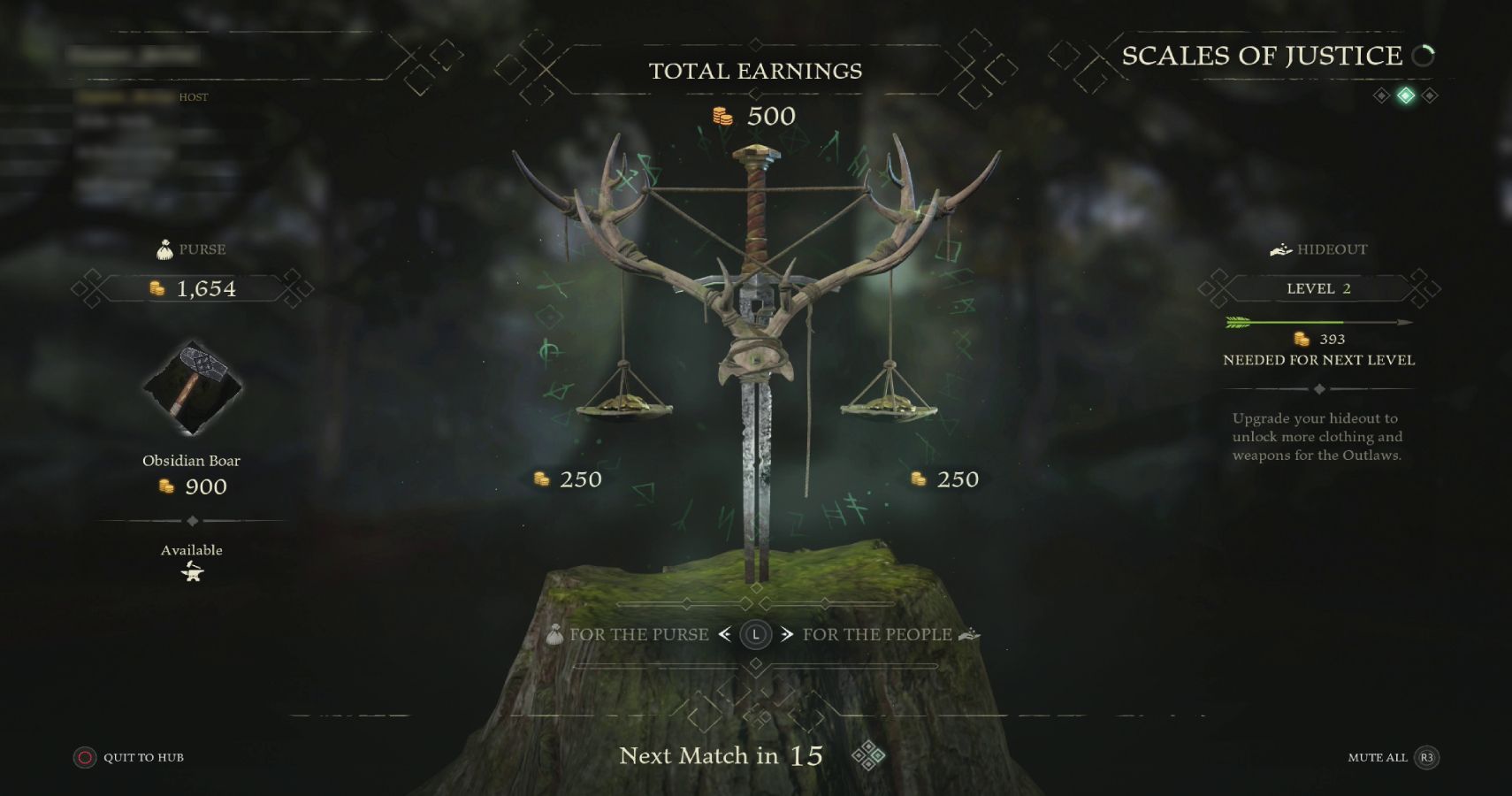 I will admit that the first couple of games I experienced were pretty exhilarating. Moving in sync with my teammates as we tried to figure out the best way to grab the treasure without attracting attention required some careful planning. Sneaking up on enemies and assassinating or sniping them was satisfying and the extraction process led to some tense moments. Once I had won a few rounds, I began to think that this Hood game just might have some juice in it. Unfortunately, this is a game that gets less interesting as you continue to play it.

Once you’ve got the maps down, every match becomes a routine. Grab the key, find the vault, die, respawn far away, capture a respawn point, steal the chest by killing the other team, get killed by John’s melee attack, respawn far away again because the other team stole back the respawn point, winch the chest, lose the chest, winch the chest, get insta-killed by The Sheriff, and on and on and on. Then after about five to ten minutes of constant, sloppy fighting, the chest is mercifully extracted and everyone can go on with their lives.

To make matters worse, most of the gameplay up until the extraction itself feels pointless. You could be the sneakiest team imaginable, manage to get the chest nearly to the end of the winching process, only to get destroyed by 4 Johns who winch it to the last tick of extraction and win. If there was another way to extract the chest using optimal stealth that would give your team options, but the extraction point always becomes a warzone where Johns are running around swinging their hammers. It makes the endgame feel very repetitive. 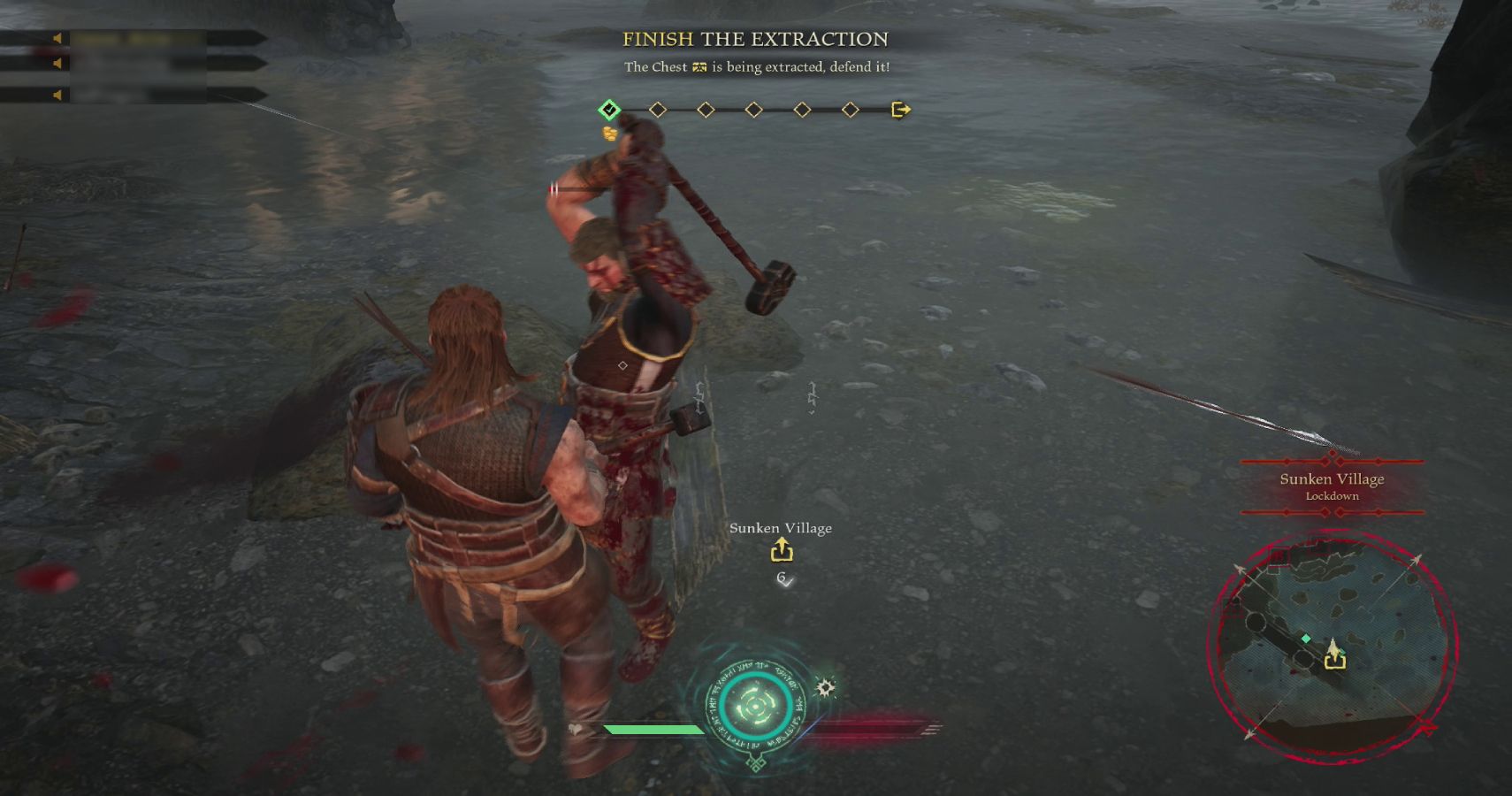 What hurts Hood is how quickly you can become familiar with it. For a game about heists, it sucks that every single one of them is the same. Hood has a roadmap for additional content – and a battle pass of course –  but the problem isn’t just a lack of new maps and heroes. The gameplay formula itself needs some variation to break up the monotony. Right now, this is a game with only one type of game mode that features one type of mission. Unless the developer puts in more varieties of heists or more intricate levels, I can see the player base for this dying off quickly.

Which would be a shame, as while I did get bored of it those first few matches showed a lot of promise. The idea of trying to execute a medieval GTA-style heist while fending off other players is so good that I want it to work. This is just missing some kind of secret ingredient to make everything come together. Maybe after some time and the addition of DLC, this could be a worthwhile game to play with friends. Hopefully, that happens sooner rather than later, as right now Hood: Outlaws and Legends feels more like a missed opportunity than a bullseye.