Last year was pretty great for video games. We had Persona 5 Royal, Doom Eternal, Animal Crossing, Hades, Final Fantasy 7 Remake, Yakuza: Like a Dragon, Assassin’s Creed Valhalla, The Last of Us Part 2, and dozens of other unanimously acclaimed titles. It was one of those real powerhouse years, where almost every single month had at least one game good enough to properly captivate you, but finishing it was made difficult by the fact the next blockbuster title was just around the corner. A blessing and a curse – so many good games that there are actually too many to play.

The result of this is that loads of us missed all kinds of different games last year. For example, I’m stupidly excited to finally dip into Yakuza: Like a Dragon, but I’ve only finished two other Yakuza games – while I know they’re not connected, I don’t want to start Ichiban’s story until I’m finished with Kiryu’s. I missed some other titles too, although there’s one game I played that I reckon loads of you probably missed: Necrobarista.

Weird name, right? Just an instant image of death by coffee. That’s not exactly what this game is about – but it does discuss death, and it transpires in a hip Melbourne coffee shop. If you know any Aussies, you’ll probably already know that Melburnians take their coffee pretty seriously – you’d be hard-pressed to find a Starbucks there, to say the least. So yeah, the name makes sense.

But it’s not really about the beans, or percolators, or whether that milky drink over there is better classed as a latte or cappuccino. Again, it’s about death, and by extension, life. It reminds me of that Murakami quote from Norwegian Wood – “Death is not the opposite of life but an innate part of it. By living our lives, we nurture death.” It might initially read as a bit grim, but it’s actually pretty heartening. I reckon that’s what Necrobarista aims to achieve – it’s a serious portrayal of death and the lingering effects that travel like tremors after it, but it’s also devoted to the idea that death is normal and life is worth celebrating. It’s a phenomenally heartfelt study on the human condition, but it’s never pretentious for a single second. 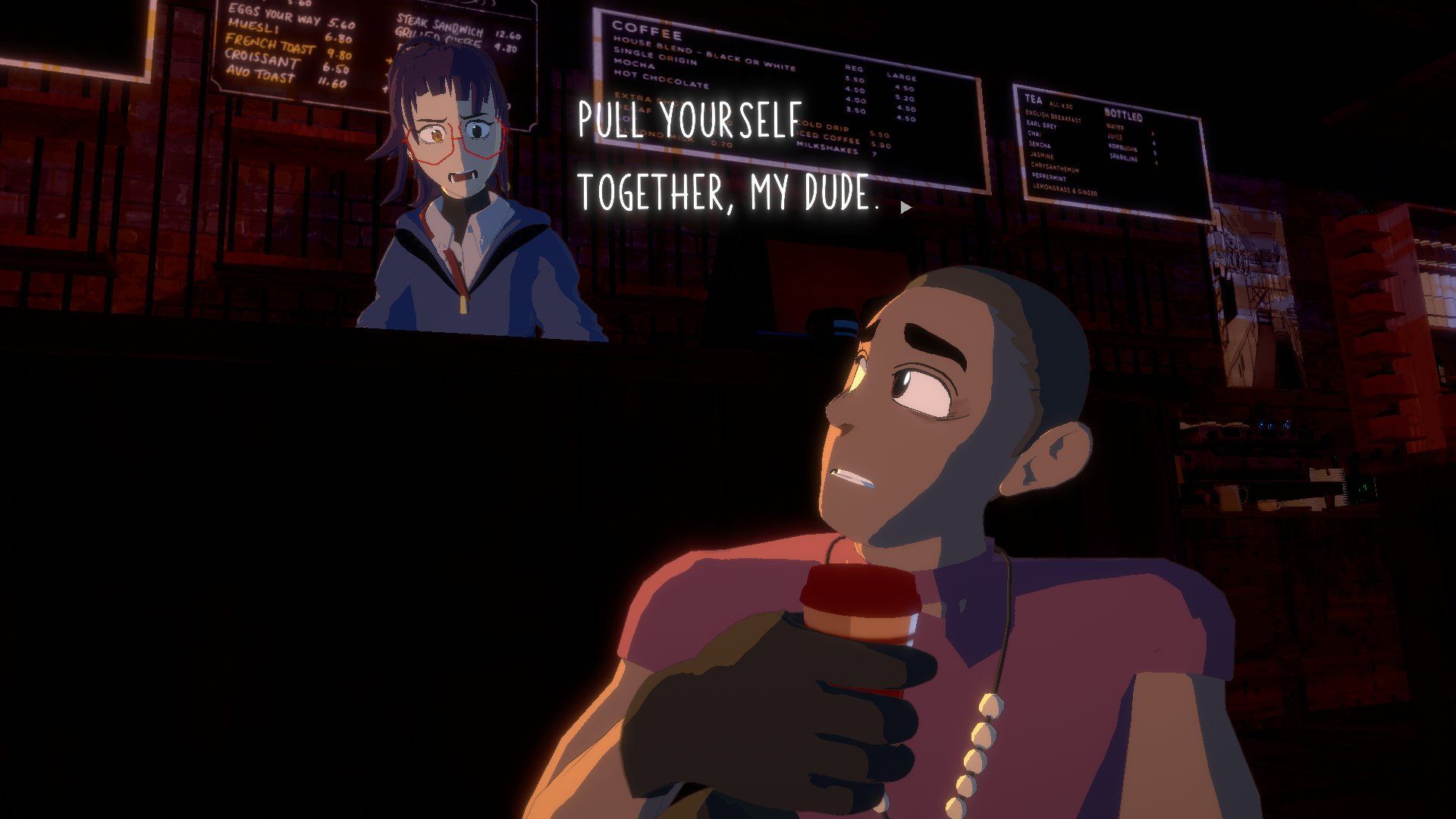 This is courtesy of a number of reasons. Necrobarista’s art direction is inspired, and I’m not just saying that in the same way we go, “Oh, this game looks nice!” It looks different to anything else and it’s emphatically directed – sure, the pixels are arranged in an aesthetically pleasing way and the colour palette quickly establishes a clear identity for itself, but it’s the framing, the angles, the expressions, and the positioning that make it truly dynamic. The narrative is primarily told via stills with captions, but the way they’re ordered and structured makes it feel as dynamic as full-motion video. Except it’s not full-motion video, is it? Necrobarista is its own thing and never tries to be anything other than that.

The visuals do their fair share of heavy lifting in narrative terms as well. As I mentioned earlier, expressions are a pretty big deal. Sometimes they’re melodramatic, emphatically over-animated for comedic purposes – but sometimes it’s the minor things you barely or even subconsciously notice that invert the entire mood of a scene, Maddy might grimace, Kishan might smirk, Chay might get that faint glimmer of hope in his eye. Every word, pixel, and prompt in this game was designed, iterated on, and implemented with a degree of care that other developers would do well to learn from. Nothing feels out of place unless it’s supposed to, in which case its position is retroactively justified by a later scene. That’s not to mention the music that accompanies the whole experience, which is Just. So. Good. There’s chill-pop, heavy synths, and everything in between, and yet somehow it’s all smoothed over with such a careful ear that it feels connected, even continuous. Every artistic mode Necrobarista touches is handled with the kind of finesse that makes it benchmark worthy, which is probably the highest praise you can pay any individual department, let alone an entire game consisting of multiple.

I can’t praise Necrobarista enough. I was late to the party with it – I played it in December as part of my “games I missed that I really need to play before the year is out” backlog. Out of all the games I played though, this is way up near the top, to the extent that writing about it now makes me recognize I love it way more than I initially realized. It’s something that everybody interested in video games should play, and something that everyone who plays it will benefit from in one way or another. It’s smart, tactful, emotional, and just downright brilliant, and I envy anyone who hasn’t already given it a go. If you’re one of those people, you know what to do. It’s on PS4, PC, and Switch, so… yeah. Do yourself a favour and download it. There’s no way in hell you’ll regret it.

Next: Doomguy And Lil Nas X Need To Team Up 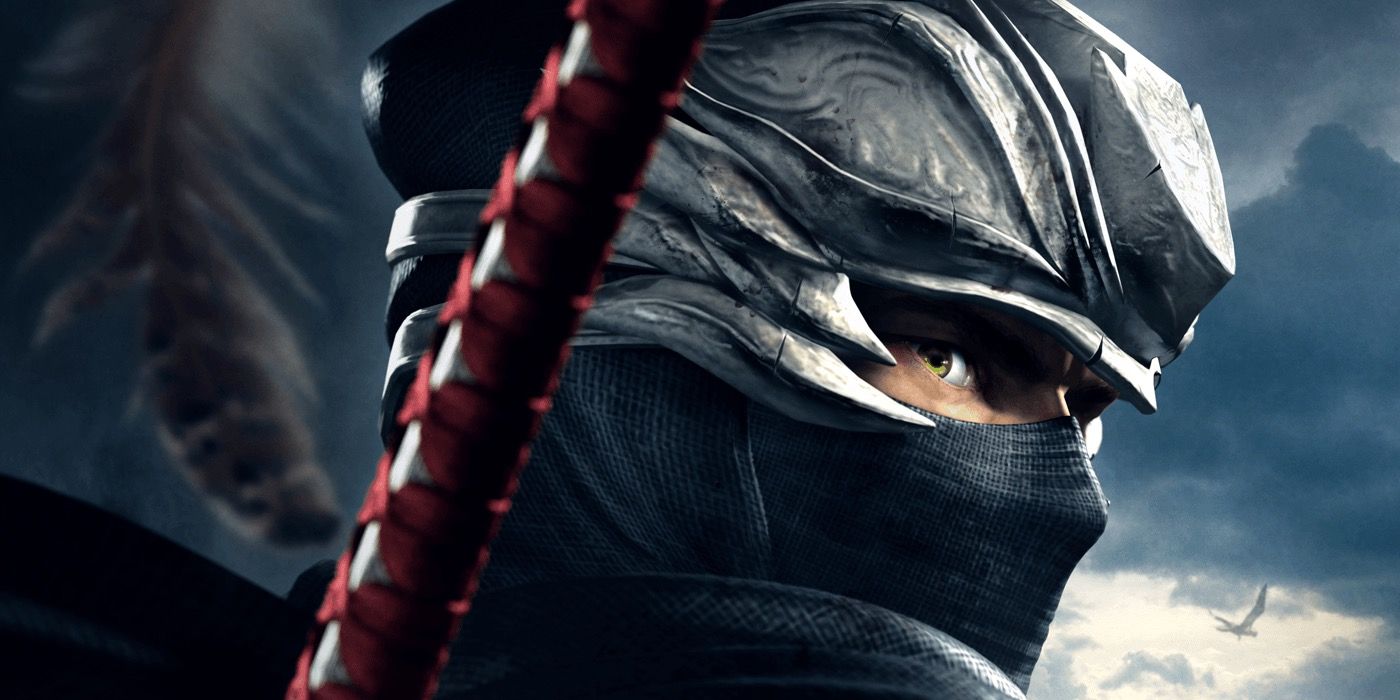