Have you ever been to any of Skyrim’s finest boozers? Count yourself lucky if so, because there aren’t very many of them. For a country so northern, isolated, and ravaged by all manner of snowstorms, you’d think the people of Skyrim would be constantly up for a hearty glass of Daedric Lava Whiskey to keep their heads dosed and bellies full.

Alas, Daedric Lava Whiskey is seemingly reserved for those who live in Cyrodiil’s Wizard’s Tower — the inhabitants of which drank all but one bottle left next to the tombstone of its discoverer, Tamrielic ale aficionado Rindsey. But that’s not why we’re here — we’re here to find out if there’s even one single decent bar in all of Skyrim. You might think, “Well, of course there is!” But I’m from Ireland, and I’m not going to go easy on any of these shitholes.

First, some context: I will rank every pub on a five-star scale. One star is attributed to drink, one to food, one to aesthetic, one to atmosphere, and one to customer service. I am allowed to assign partial stars — it’s not a one or none system. After ranking every pub in each Hold, we’ll determine a winner, who will then progress to the quarter finals. Before you pull me up on that, I am aware that there are ten Holds in Skyrim, which is not divisible by four. Let me explain: Hjaalmarch, the Hold where Morthal is located, is a kip. It’s automatically out. It has one tavern, the Moorside Inn, and it is the definition of zero stars. Solstheim, another Hold (technically), is an island off the coast of Skyrim, and this contest is exclusively based on Skyrim’s mainland. I would spend all night in Solstheim’s sole boozer, The Retching Netch, and give it a solid four stars (none for food — add a “w” to the beginning of Retching and you’ll know why). But for this competition, it’s out. 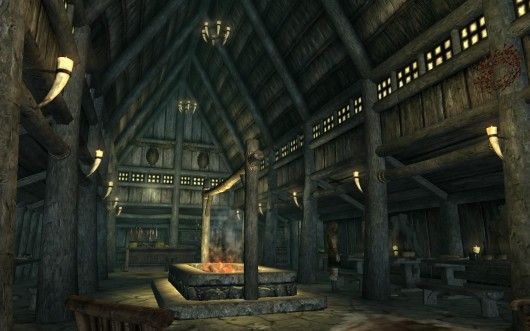 Located in the tranquil village of Riverwood, the Sleeping Giant Inn seems like a lovely place. A large, open hearth warms a comfortably sized common area, and there’s food and drink to burn.

It’s a shame, then, that its proprietor is a member of The Blades, an ancient dragonslaying society thought to be extinct. I’ll give the Sleeping Giant Inn 0.8 for food, 0.7 for drink, and 0.2 for atmosphere (there’s barely ever anyone here except for some of Riverwood’s more annoying citizens). That’s 1.7 out of 3, with two points left to give. Aesthetic is a 0.6, due to the aforementioned cozy interior, but I’m giving the customer service 0.1 considering that Delphine has a secret lair underneath the bar that far too many people have probably wandered into after a few drinks — and never wandered back out of. 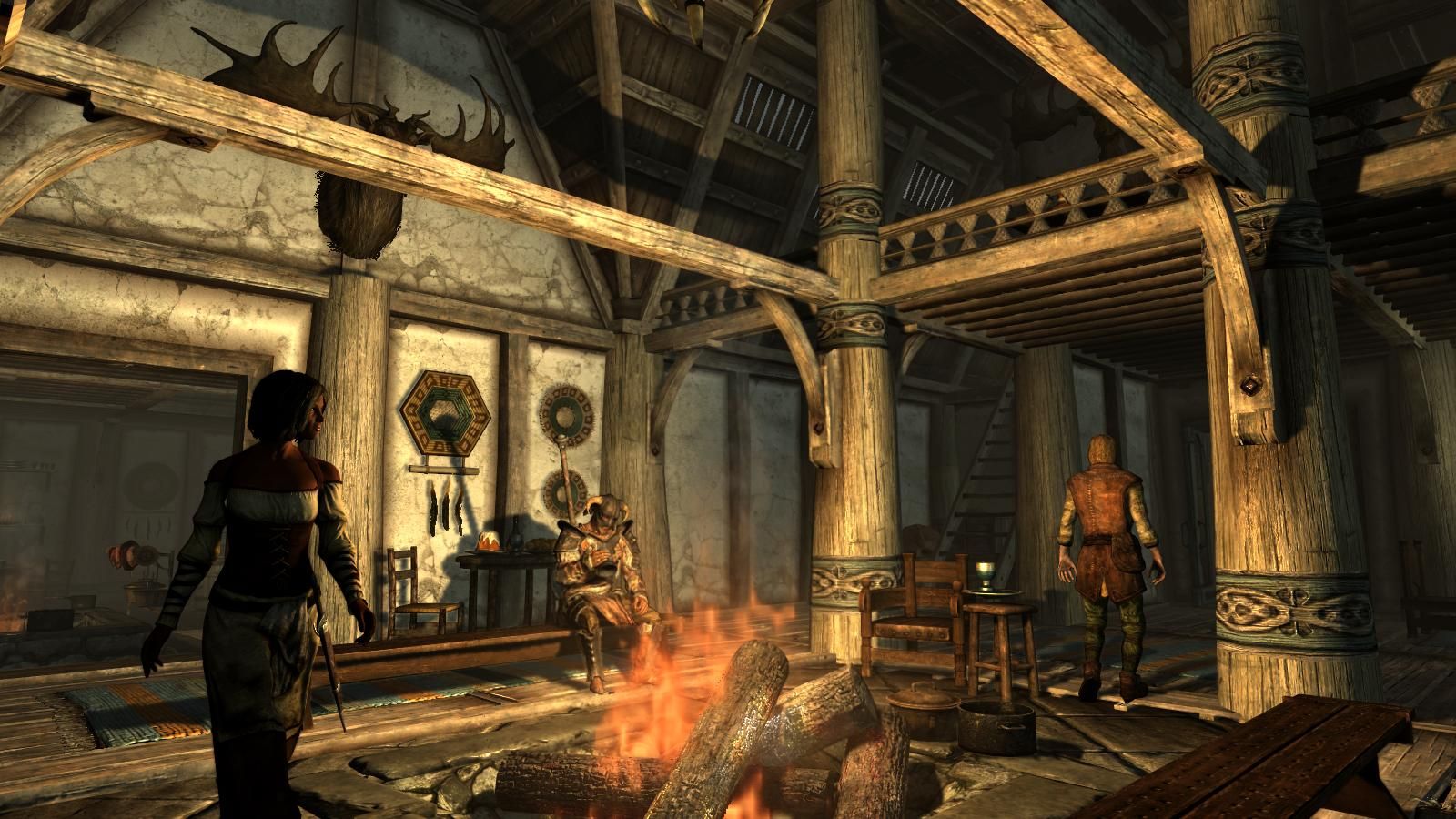 A great pub, simply put. It’s in the heart of the city, and once Whiterun’s market winds down for the evening, The Bannered Mare is the place to be. There’s live music, a clientele encompassing people of all ages, a great selection of booze, and a huge fire pit to roast your Horker meat over. 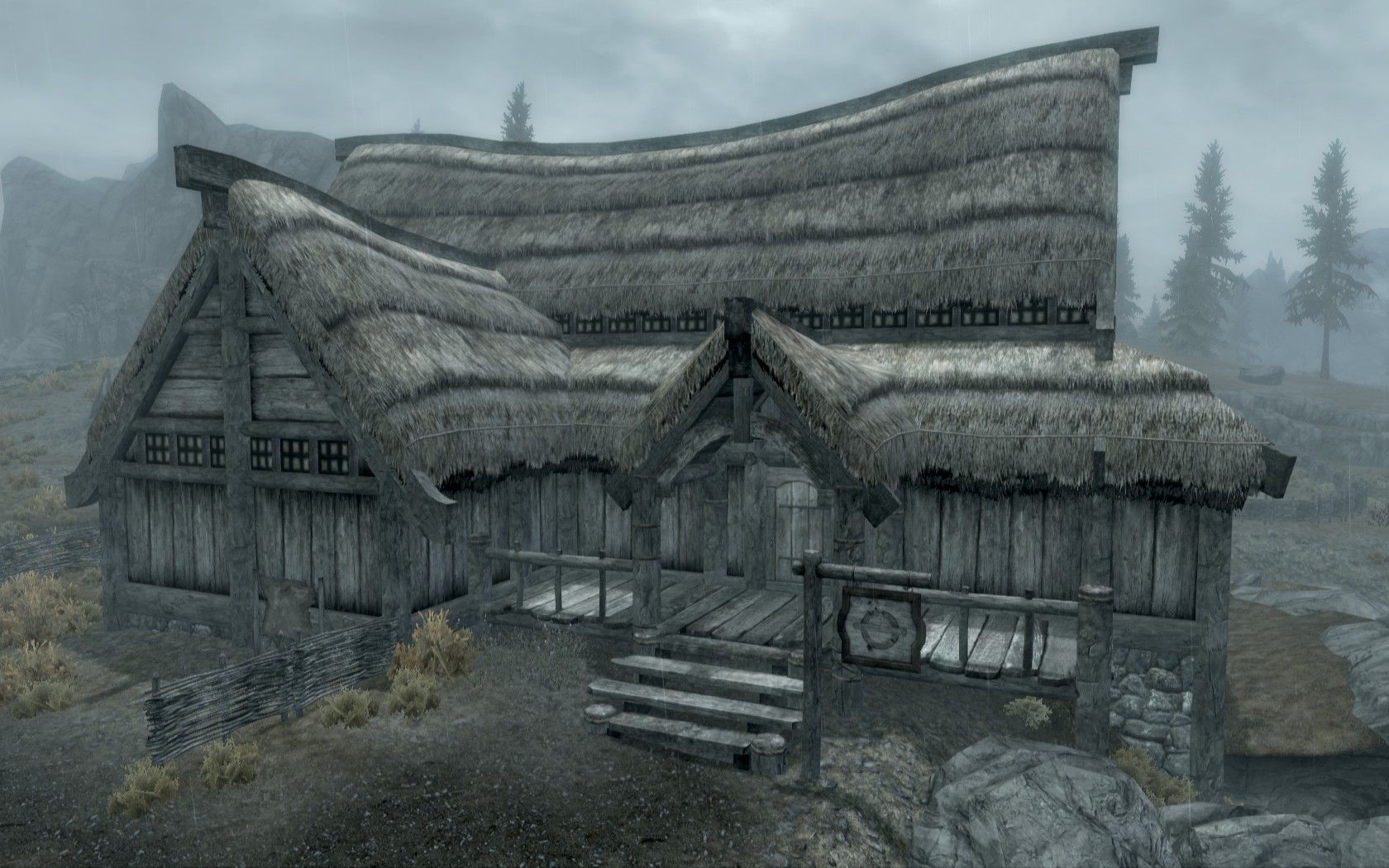 You know, I’ve never been mad about Rorikstead. The whole atmosphere there is a bit weird, and a dragon gets resurrected around the back of this pub. I’m just going to save us a lot of reading here and say this is a 1 at best. 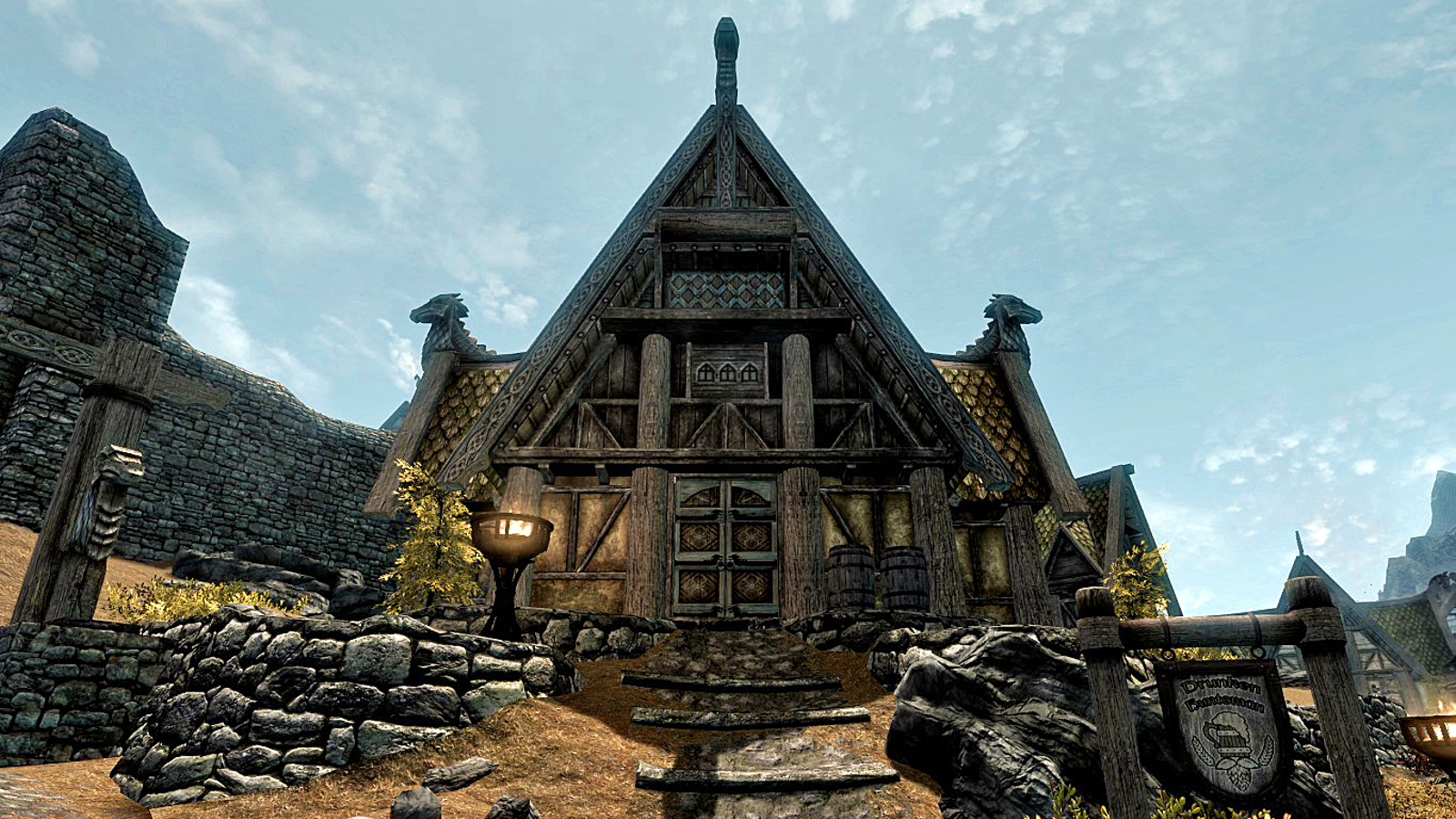 Lovely interior. Doubling as a fletching shop, The Drunken Huntsman definitely lives up to its name. That’s an interesting point, actually — it got its name because the owner and his brother drank “rather too much mead” on a hunting trip, which led his brother to shoot him in the arse with an arrow.

It’s one of the only places in Whiterun where both Battle-Borns and Gray-Manes regularly show up. It’s got mercenaries as well, which means you know the beer is decent before you’ve even had a sip. It’s a full 1 star for both food and drink, a 0.9 for customer service, a 0.8 for atmosphere, and a 0.9 for aesthetic. That’s a whopping 4.6 / 5 — The Bannered Mare has gone to the dogs.

The Destroyed Tavern In Helgen 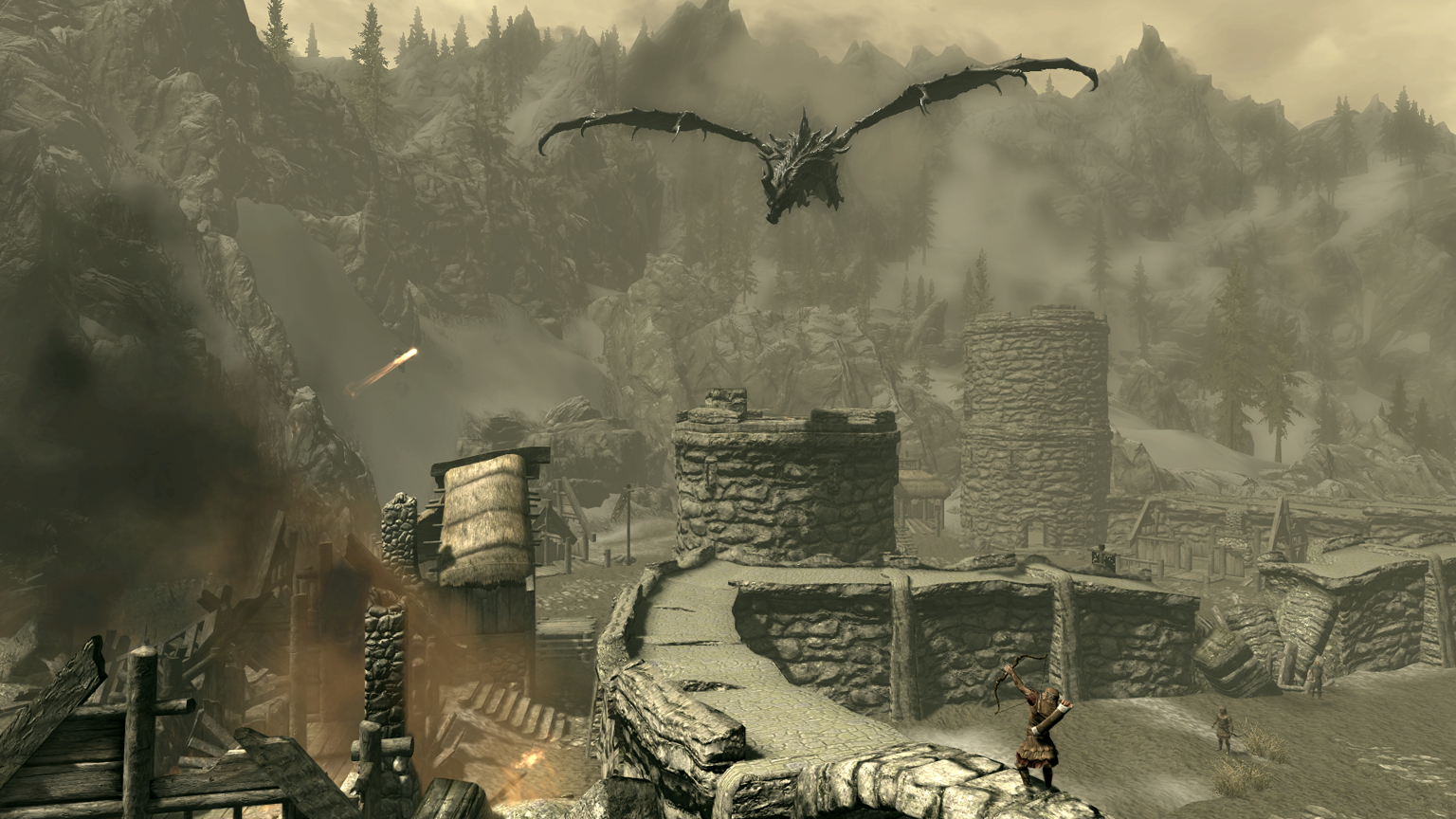 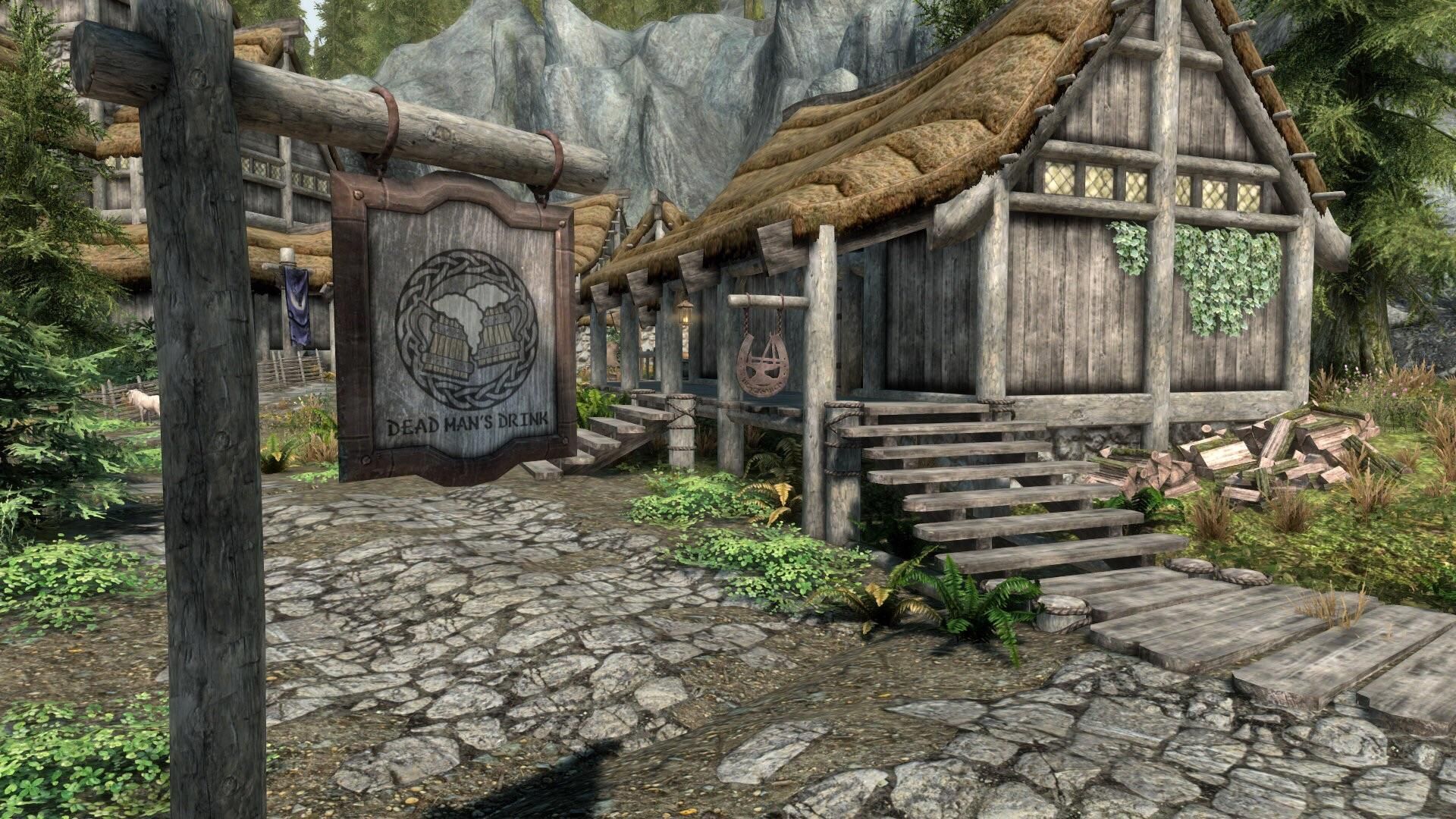 This is an amazing pub, and its status as a boozer named for being next to a graveyard is shared by one of Dublin’s most famous bars, The Gravediggers. I’m not going to waste your time and go into laborious detail here, because The Drunken Huntsman is better, but Dead Man’s Drink is at least a 4.

Second bracket: Haafingar vs. The Reach 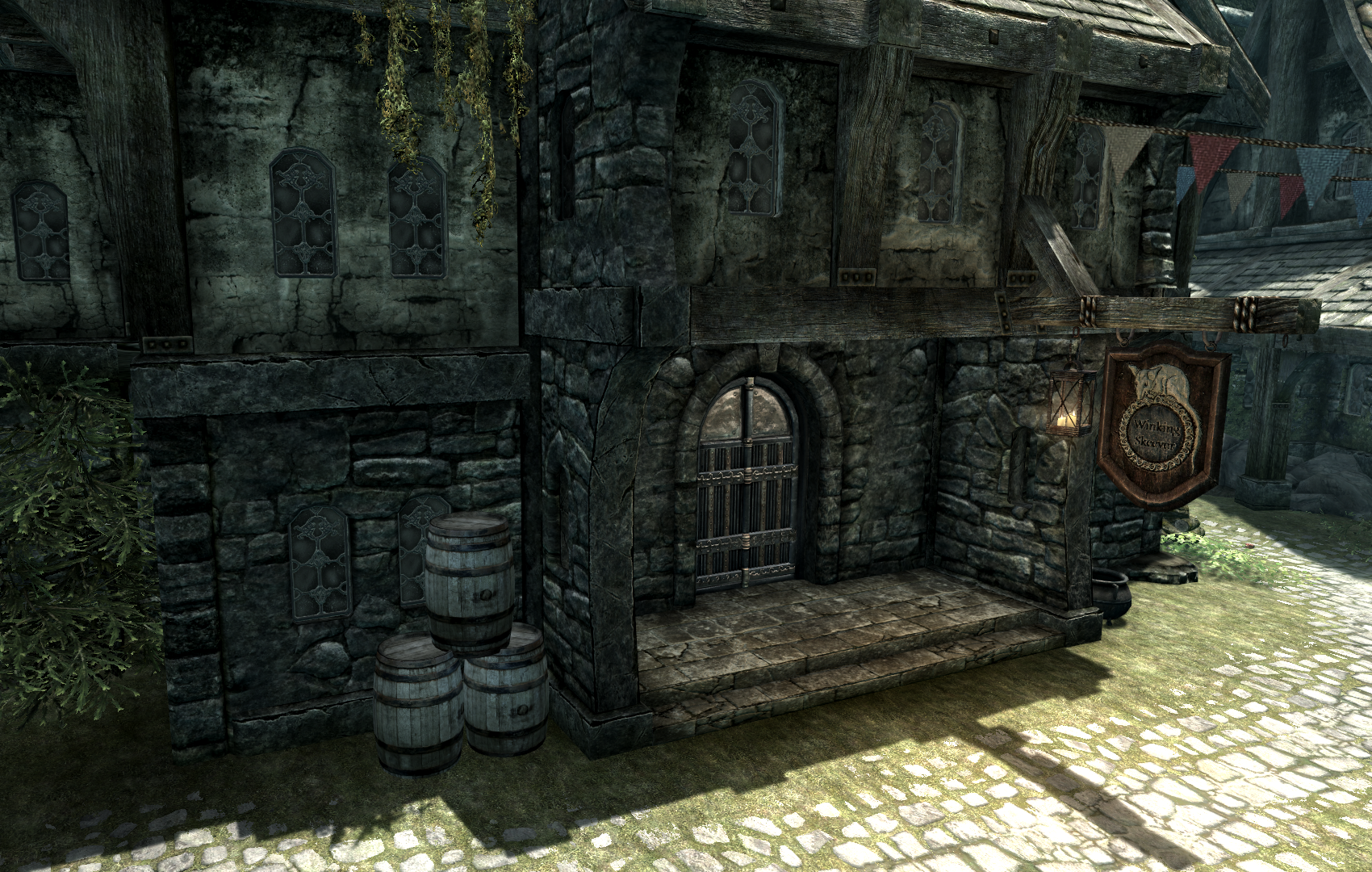 This place is owned by a guy called Corpulus Vinius. It’s located in Solitude and only Tories drink there. Big fat 0.1, purely because there’s at least a sliver of alcohol on the premises. 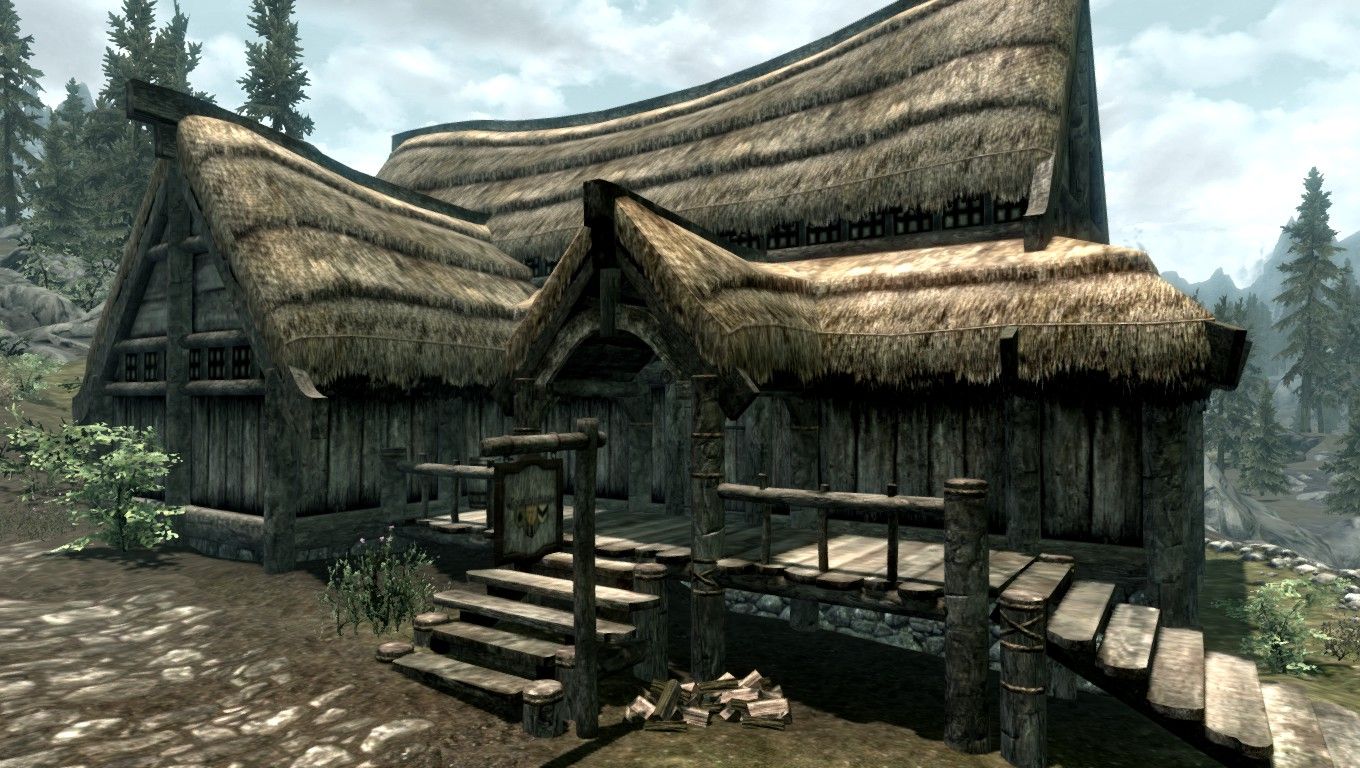 Fewer Tories, but they’re still knocking about. Plus it’s just a bit boring — the only thing it has going for it is that it’s located in a place called Dragon Bridge, which makes it sound much cooler than it actually is. 0.9, slightly worse than Rorikstead.

One of those places that’s like, “something interesting happened here 600 years ago.” Flat rating of 2. 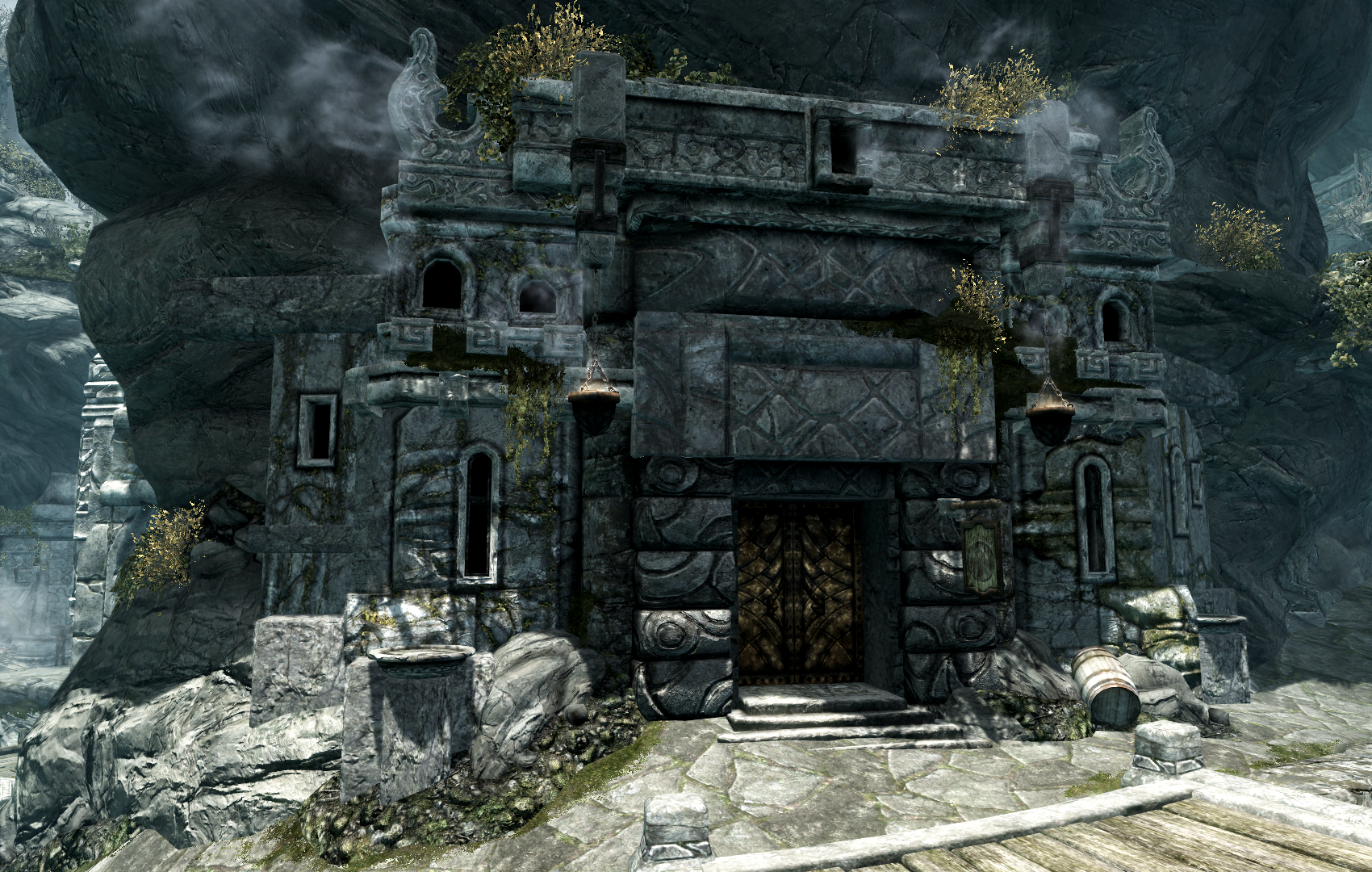 Much better. Good beer, decent music, lots of people. No one here really knows what they’re doing, and it’s a bit weird when the owners walk into the room you’ve rented — which they always seem to do — so I’m going with 0.8 for food, 0.8 for drink, 0.4 for customer service, 0.8 for aesthetic, and 0.7 for atmosphere.

Third Bracket: Winterhold vs. The Pale 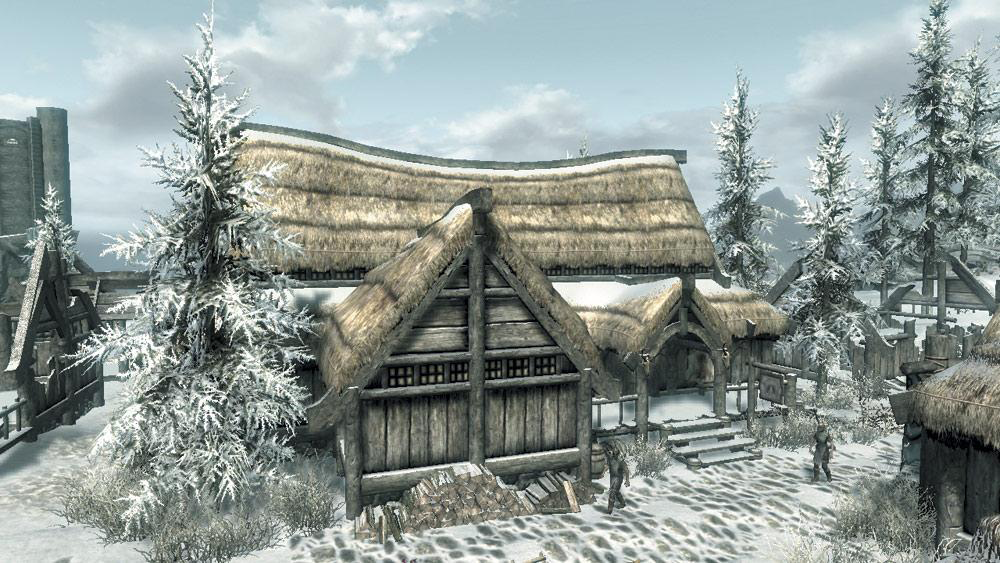 This is the last profitable business in all of Winterhold. There’s a guy with Azura’s Star — a literal Daedric artifact — hiding out in the basement, and everyone here is up to something unspeakably absurd. The owner is lovely, so we’ve got a 0.9 for customer service. 0.8 apiece for food and drink, 1 for atmosphere, because this place is wild, and 0.8 for aesthetic. 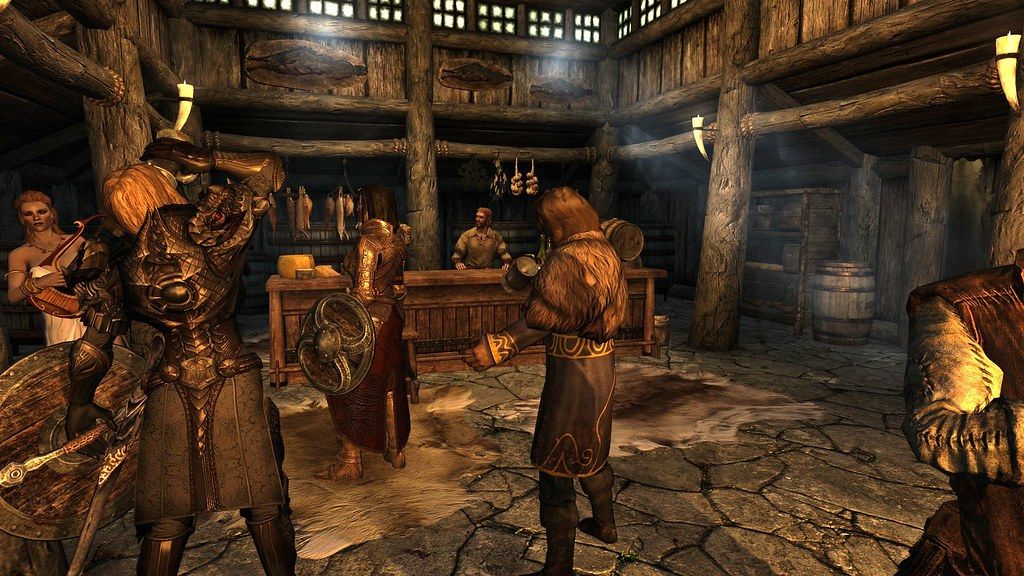 This place is in Dawnstar, which is almost as bad as Morthal. However, everyone here is absolutely on one the first time you walk in, so the atmosphere is a clean 1/1. Between having some decent food and drink, not being totally ugly to look at, and the bard and bartender here being relatively sound, we’ll give it a 3.5 (0.6, 0.6, 0.6, and 0.7, respectively). 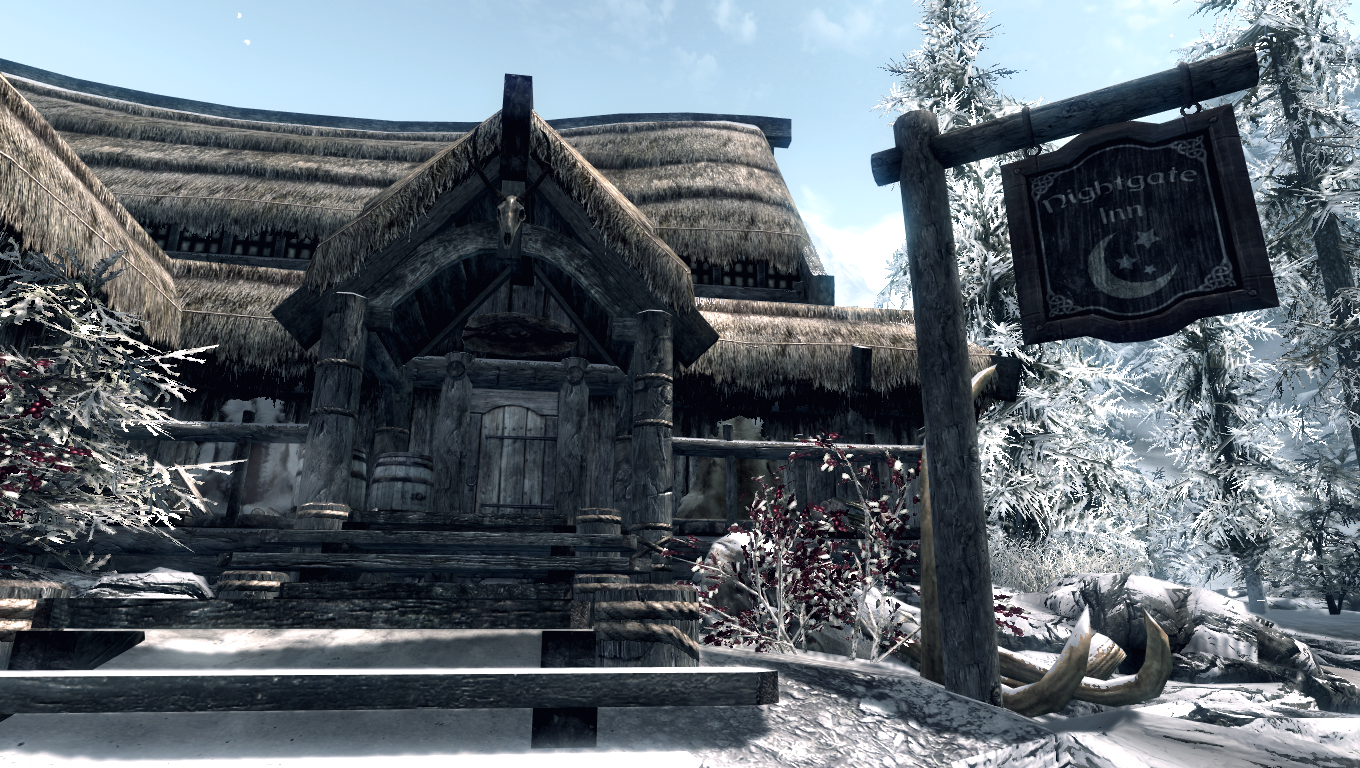 Nightgate Inn, located halfway between Dawnstar and Windhelm, is lovely and lonely in equal measure. It’s nice if you’re the artsy type, and want to drink in solitude by the cruel depths of the perpetually frozen lake next to it, but aside from that it’s just sort of quietly sad. 0.8 for food and drink, 0.1 for atmosphere, 0.7 for aesthetic — because of the lake, obviously — and 0.9 for customer service, because the owner is just a really lovely guy. 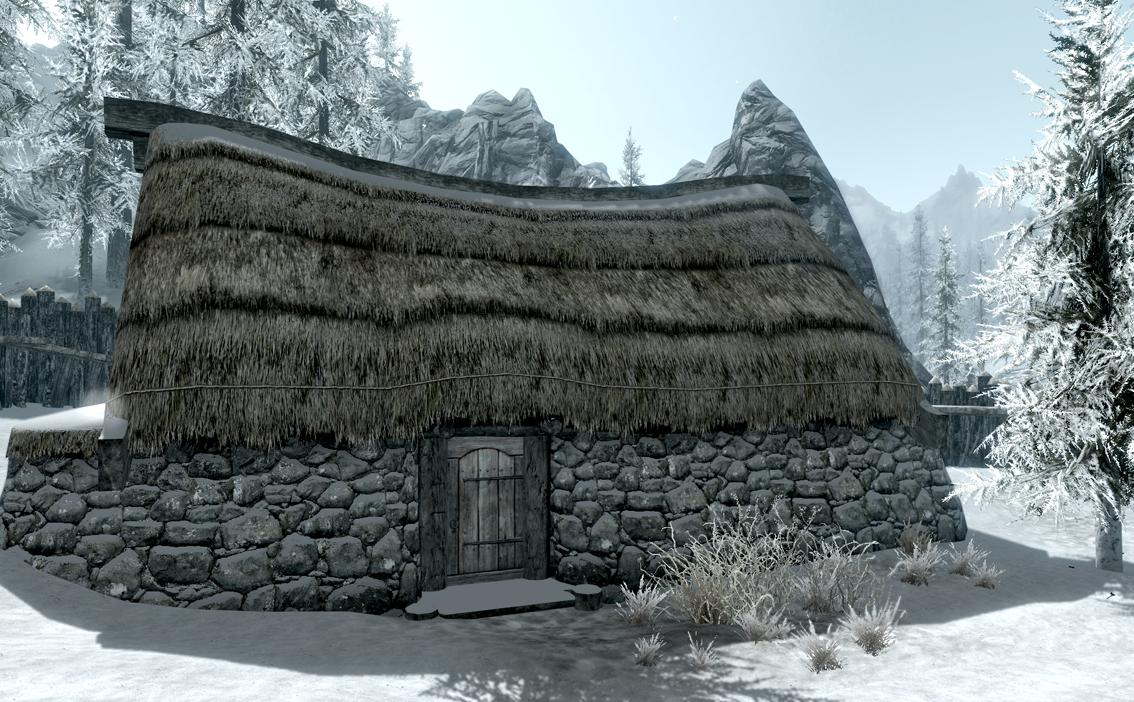 Literally dead bodies in this bar, and nobody to serve you drink. 0.1 for food, because it’s gone off, but a full 1 for drink because it’s free booze. 0.1 for atmosphere because, you know, corpses. 0.1 for aesthetic, same reason. And 0 for customer service because there’s nobody home. 1.3 — still 1.3 points higher than the stupid Tory bar in Solitude.

Winterhold vs. The Pale Winner: The Frozen Hearth, 4.3

Fourth Bracket: Eastmarch vs. The Rift 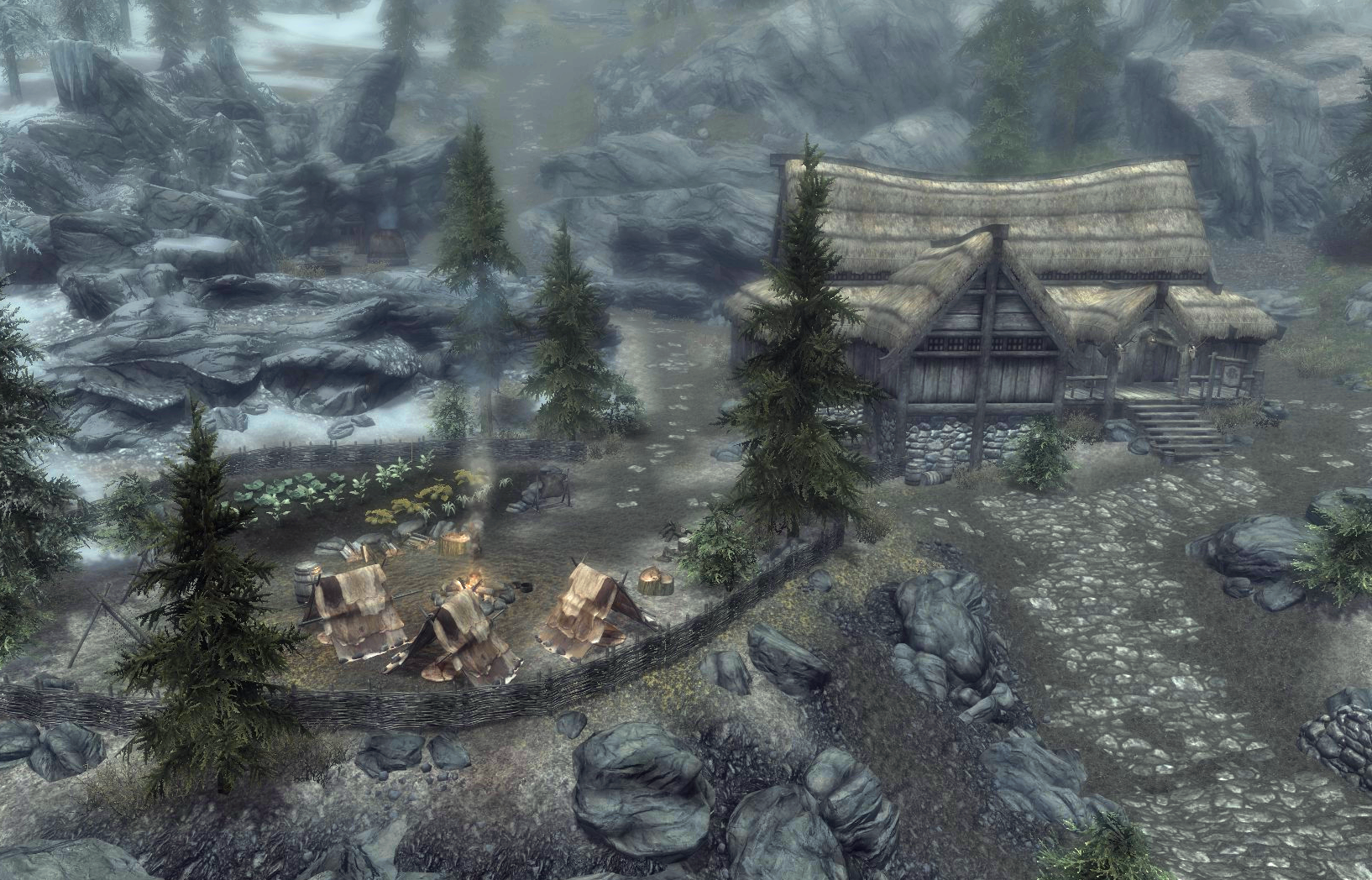 Delphine was right when she said this place serves a “nice, dark ale.” However, it’s located in Kynesgrove, which puts it in a pretty precarious position. The music is nice, but the location isn’t — the beer is good, but there are dragons everywhere. 1 for drink, 0.8 for food, 0.7 for customer service, 0.7 for aesthetic, and 0.5 for atmosphere — half good for decent tunes, half bad for dragon fire. 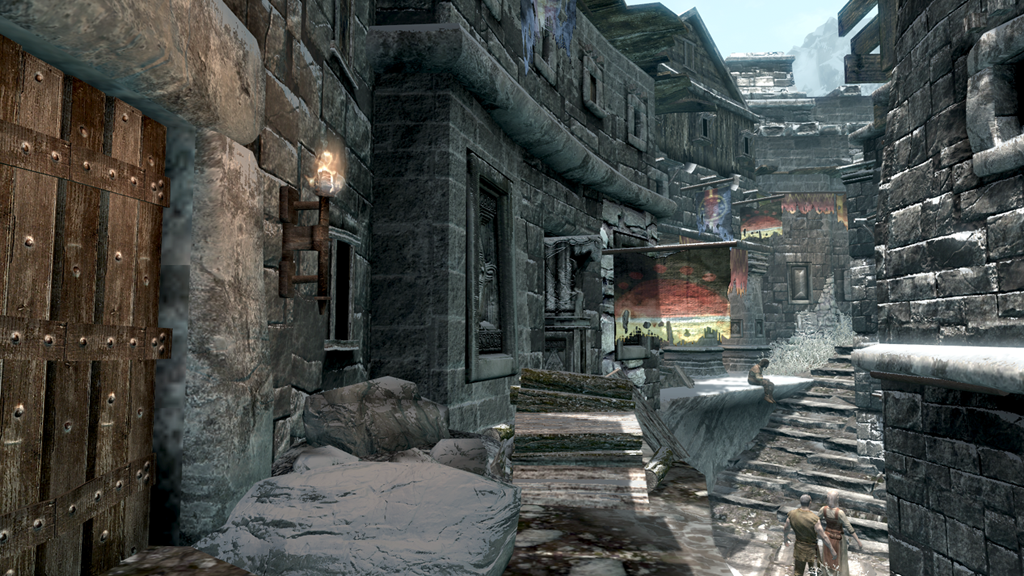 Located in Windhelm’s Gray Quarter, this is where the Dunmer drink to avoid the racist bigots in Candlehearth Hall. The Nords who aren’t gigantic idiots come here and have a great laugh with the Dark Elves, and are convinced that the beer here is much better to boot. I reckon it’s a 1 for beer, a 0.7 for food, a 0.8 for atmosphere, a 0.8 for customer service, and a 0.7 for aesthetic. 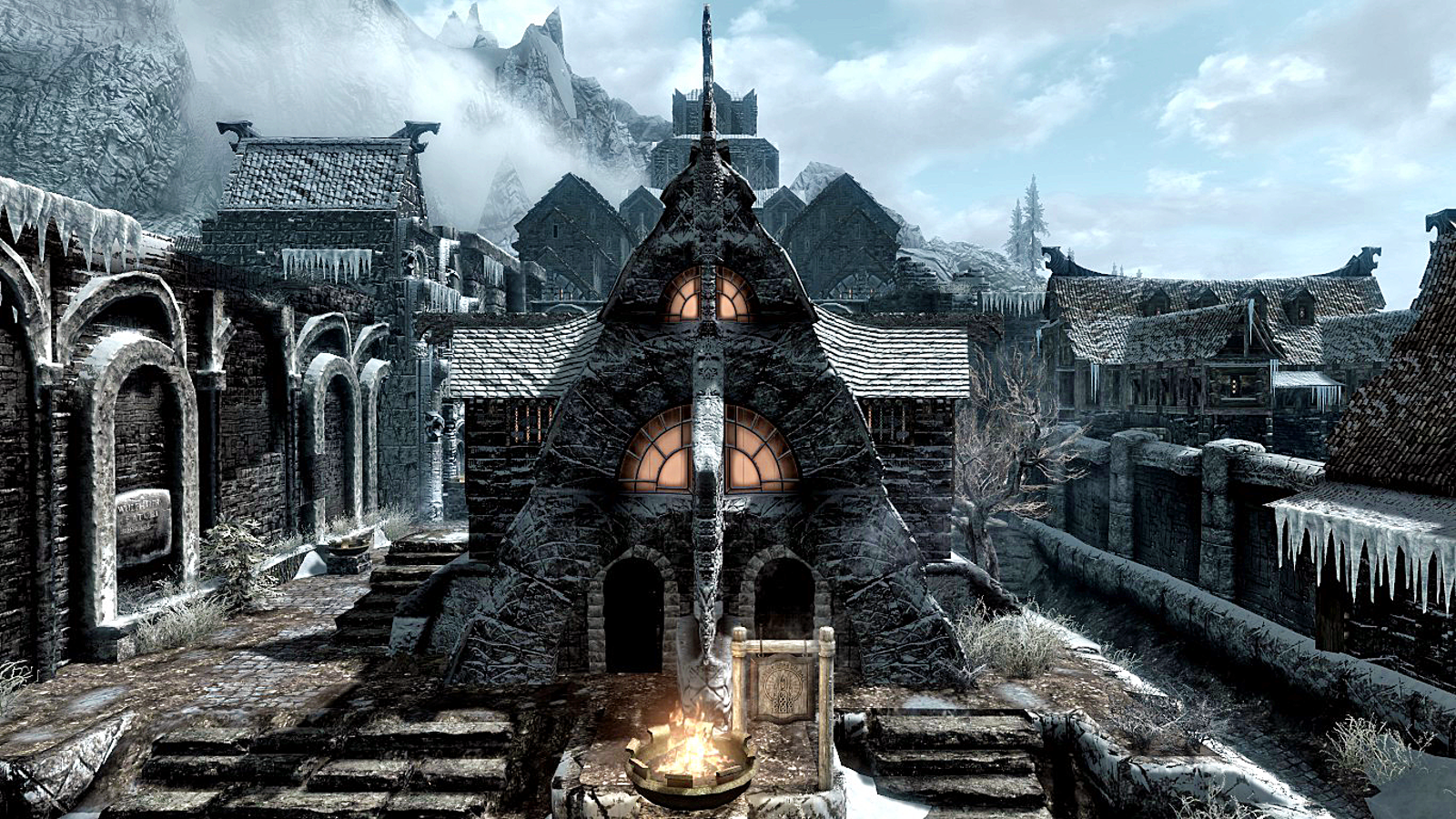 I just told you it’s full of racists and has shit beer. 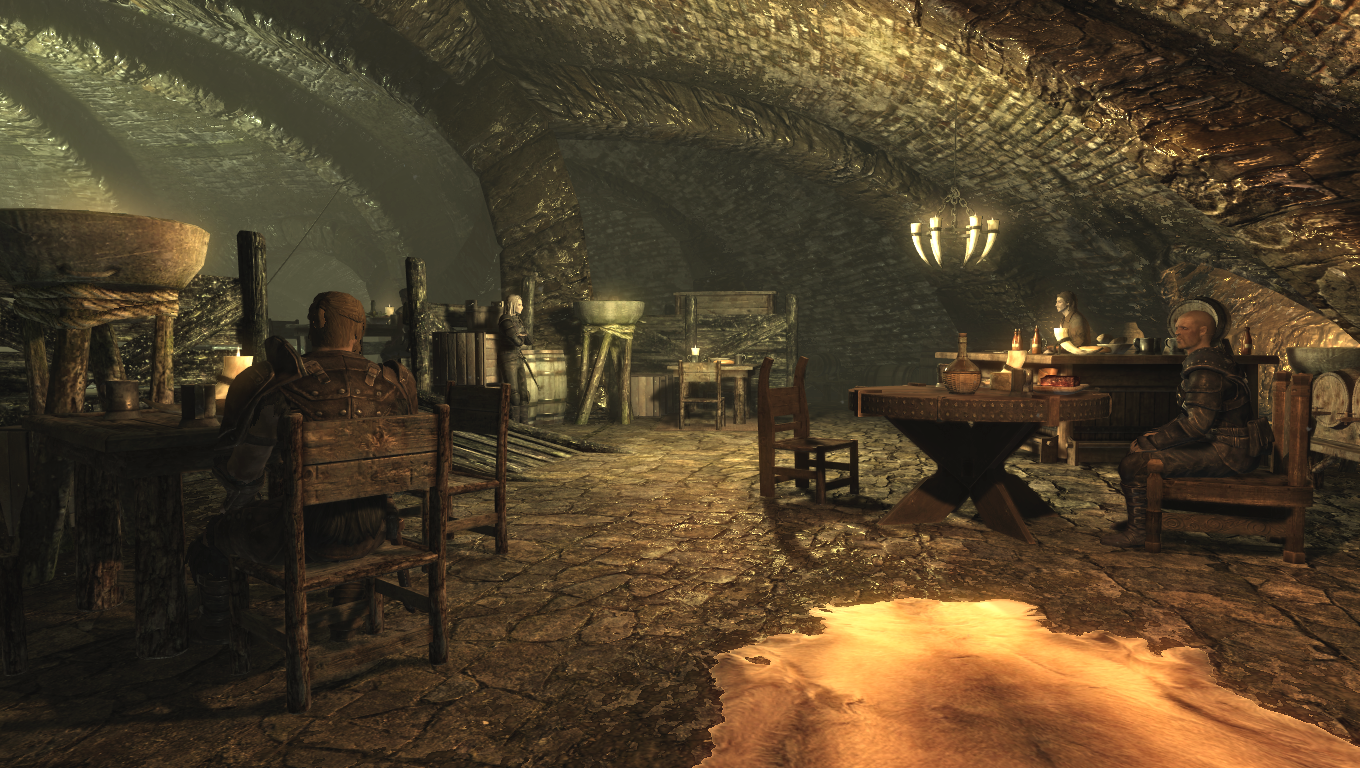 Excellent pub. Always packed, loads of food, proper drink. It’s sort of like an exclusive members club, except for the most notorious criminals from the Rift and Beyond. 1 for food, 1 for drink, 1 for atmosphere, 0.9 for aesthetic (it’s cool but a bit dirty), and 0.7 for customer service, because everyone here is rude but also pretty fun.

The Bee and Barb 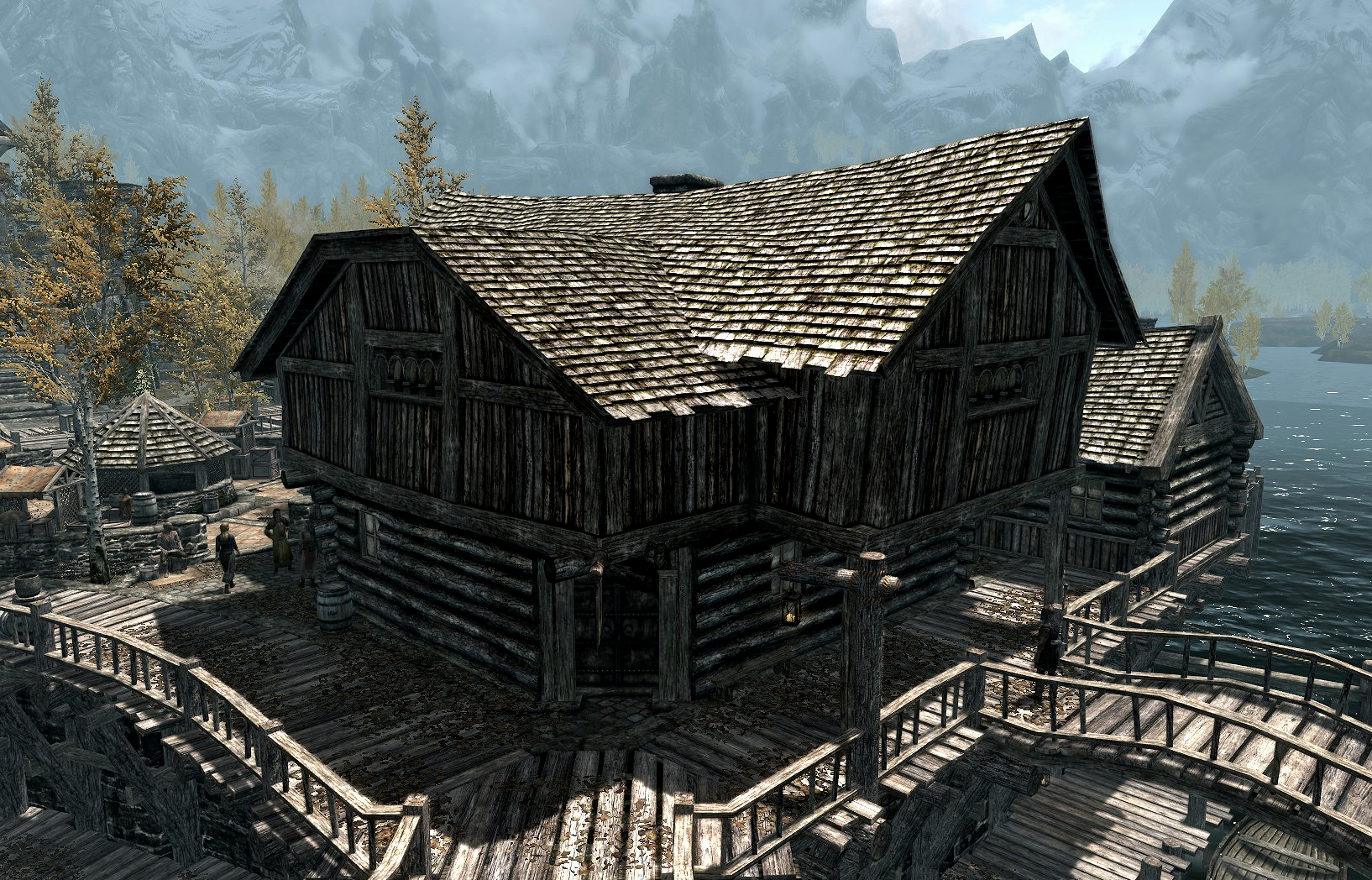 Owned by Talen-Jei and Keerava, the Bee and Barb is great the first time you visit it. It’s small, and simple, but it’s busy. There’s plenty of food and drink, and the best mercenary in the game — Marcurio — drinks here.

It’s a shame that Keerava turns on you after you are forced into retrieving some money they tried to nick off of someone. From that moment on, even if you find a bunch of flawless amethysts for her engagement ring, both her and Talen-Jei hate you. 0.7 food, 0.7 drink, 0.2 customer service (they were nice at the beginning at least), 0.5 aesthetic, and 0.8 atmosphere. 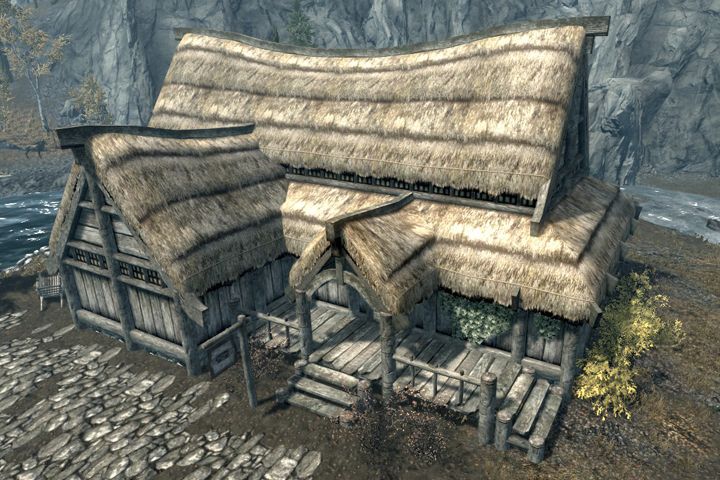 Located in Ivarstead, this quiet and quaint bar is nice for a traveller to rest their weary head, but not for much else. There’s someone on the run from the Black Briars here, which adds a bit of drama into the mix, but it’s ultimately a place that’s lovely for a day before becoming boring forever. Flat rating of 2.5.

The Rift vs. Eastmarch Winner: The Ragged Flagon, 4.6

With all of the above taken into account, here are our semi-finalists:

As you can see, there are two clear finalists — but we have a problem. Both The Drunken Huntsman and The Frozen Hearth are sitting at 4.6 points each! In percentages, that means they’d have an immense 92% rating on Elder Scrolls TripAdvisor. How on earth can we possibly settle this?

Never mind. I just remembered Nazeem lives in The Drunken Huntsman. Yes, Cloud District Nazeem. The most annoying NPC in the entire game. Maybe in any game ever, for that matter. The Ragged Flagon wins. All hail the best pub in Skyrim.

Related posts:
09/30/2020 Reviews Comments Off on I Ranked Every Single Pub In Skyrim To Find Out What The Best One Was
Hot News
Valorant’s latest patch adds newest character, Skye
With Great Power Comes A Spider-Man: Miles Morales Day One Patch
Researchers develop sentence rewriting technique to fool text classifiers
Cyberpunk 2077 Can No Longer Be Considered For GOTY
Netflix Says Resident Evil: Infinite Darkness Will Be Canon
Recent Posts
This website uses cookies to improve your user experience and to provide you with advertisements that are relevant to your interests. By continuing to browse the site you are agreeing to our use of cookies.Ok