Satoshi Urushihara is an artist often referred to as “the master of breasts.” Take one look at his oeuvre and you’ll see why – the man’s got a certain preoccupation with the female anatomy that comes spilling out in his cheesecake artwork. However, he’s not just a simple fetish artist. We’re talking about a single person practically who defined the look of anime of a certain era, a look which bled over into anime-influenced video games. Chief among those were the Langrisser and Growlanser series, two stellar tactical RPG franchises that deserved a lot better than they got in the West.

Now, Nippon Ichi is taking a chance on Langrisser again, trying to both ride off the success of the mobile game and move past the aggressively mediocre Re:Incarnation Tensei. Langrisser I & II is a collection of the first two games in the series, gussied up for modern audiences and polished with modern mechanics to court newcomers. But will those newcomers, hungry for another SRPG after Fire Emblem: Three Houses, find much to love here? 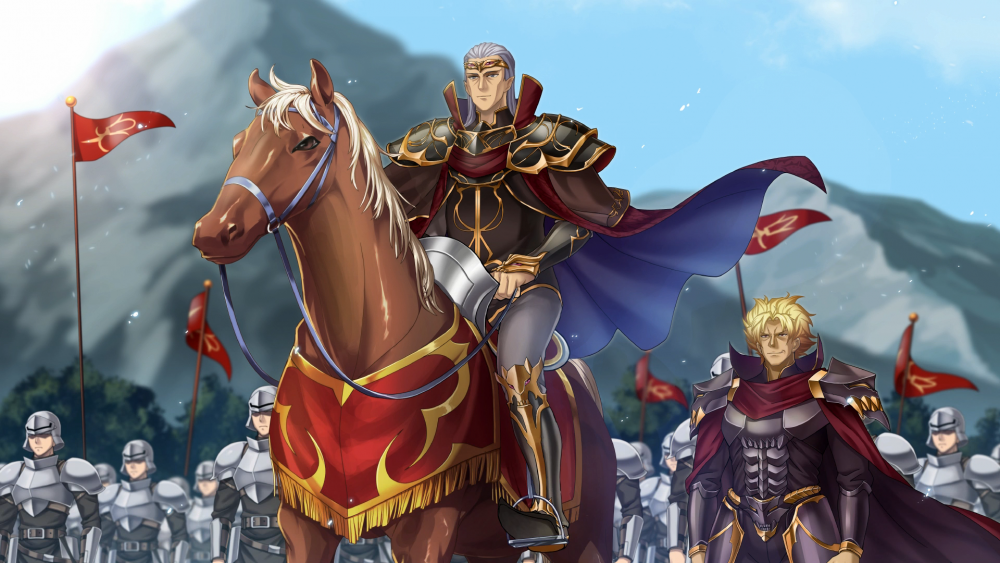 The world of Langrisser revolves around the titular sword, which is said to grant unlimited power to whoever wields it. Baldea, the royal family, has guarded this weapon for generations, and has presided over a long, blissful reign in their kingdom of El Sallia. But on one fine day, the menacing Dalsis empire invades and seeks the power of the sword for themselves. The king is overthrown, and now young prince Ledin is tasked with getting the Langrisser back and driving out the invading empire.

But wait, there’s more! The included sequel takes place hundreds of years afterwards, when the reign of Baldea is all but a myth, and the world has been thrown into a state of perpetual violence. Young wanderer Elwin and his mage pal, Hein, are wandering the war-torn lands, trying to survive amidst the turmoil sown by the menacing Rayguard Empire. Unfortunately, they wind up getting caught up in war when they come to the aid of Liana, a girl wanted by the empire for unclear reasons. Before the trio knows it, they’re squaring off against an entire army. Don’t you hate it when that happens?

To be blunt, both Langrisser games don’t have the most original narratives on the market. They’re very wrapped up in anime’s flirtation with high fantasy in the early 90s, and if you’re not into that, this’ll bounce right off of you. I have a great deal of nostalgia for these sorts of yarns, though, and I really do love the characters that populate both narratives. Plus, with around twenty unique story endings and over 500 potential character outcomes, there’s a lot to dig into here. 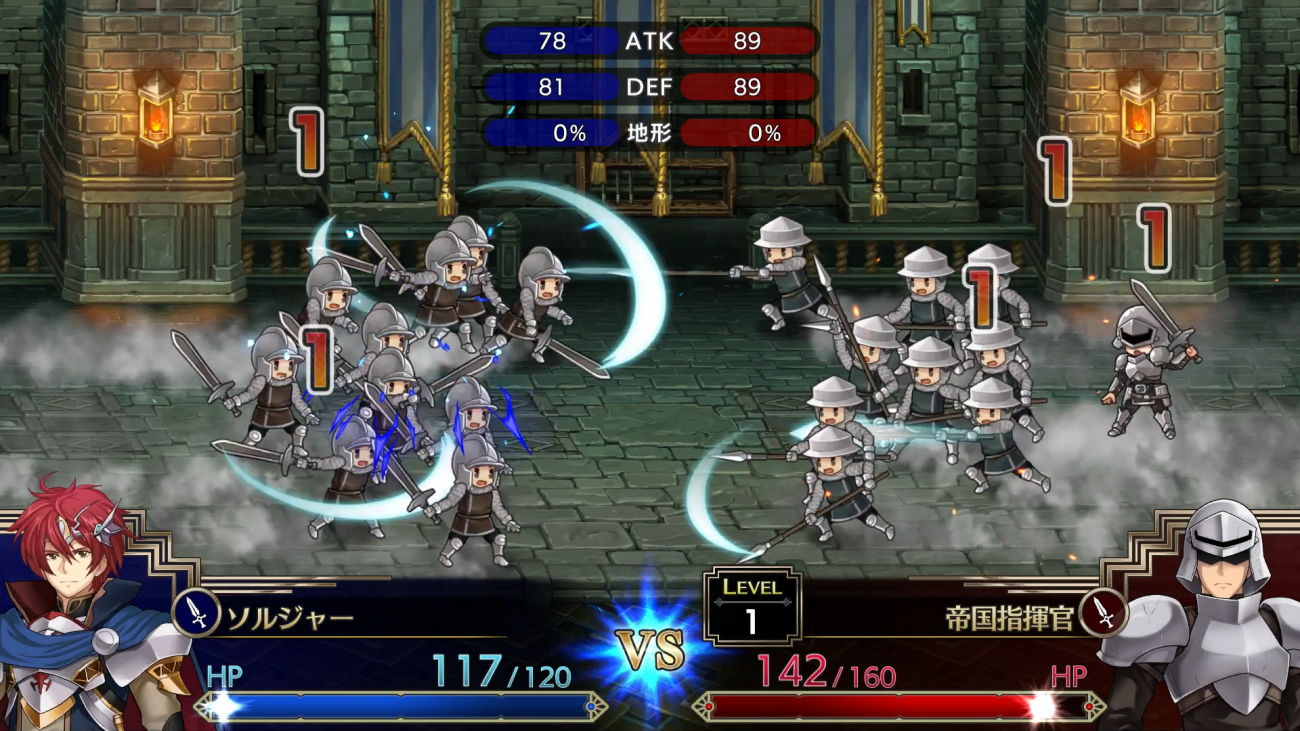 Langrisser I & II are tactical SRPGs in the vein of Fire Emblem, and they come with all the trappings of that genre. Grids, hit percentages, RNG, class changes… it’s all here, and if that’s your thing, this is a very good one of those. Langrisser might not have all the fancy bells and whistles of its competition, but it outsmarts its peers in two major areas: its map design and its willingness to completely mess you up.

Once the main characters and their four-unit clans of meat shields are thrown onto the map, the game is relentless in its attempts to force players into as many uncomfortable situations as possible. Prepare to get split up, forced into tight corridors, and surrounded on all sides across sprawling maps. Get ready to square off against enemies who are way stronger than your units early on, to be punished for bad weapon match-ups, and to get curb-stomped for even trying to land an attack that has less than a 50% chance of hitting.

Langrisser I & II is not a game made for newcomers to the genre. Now, as somebody who includes stuff like Knights In The Nightmare, Luminous Arc and Valkyria Chronicles among her favorite games, I welcome the challenge. It feels good to get smacked down for bad calls, and there’s a primal gratification to micromanaging every single unit to their fullest potential. Watching my small army of fragile fighters take over a map, square by square, grid by grid, is one of the most satisfying feelings there is in gaming for me. For a complete JSRPG nerd like me, this game’s basically a mechanical wet dream.

If Disgaea is your comfort food, and contemporary Fire Emblem’s a breezy lark, then Langrisser I & II is the thing you’ve been waiting for.

It’s worth noting that Langrisser I & II feature an overhauled art direction. Every character has been redesigned to look more like they belong in a modern JRPG, and I’ll be honest – I kind of hate it.

Urushihara’s artwork is iconic, and as seen as recently as 2011’s Growlanser: Wayfarer of Time, he’s done a fantastic job of updating it for modern audiences. The small details, sharp angles, distinct color palettes and general softness are unlike anything else in gaming, and any game with his art is elevated ten-fold by its presence. Not only that, but it is his very artwork that defined the look of Langrisser. So what did the developers see fit to do?

Replace him with the dude who did the art for Ar Tonelico.

Look, I’ve got no beef with Ryo Nagi. The guy’s a fine artist, and he’s perfectly proficient at delivering a reliable moe aesthetic for people who are into that. But his reimaginings of the Langrisser characters are just dull. They lack the pop, the flair, the attention to detail that Urushihara bakes into everything he’s ever done. Not only that, but the designs actively ruin key aspects of certain designs, like erasing crucial clothing details or lightening the skin of darker characters. It’s like promising somebody a Quesarito, then sliding them lukewarm Del Taco.

It’s worth noting that you can play with the old art assets, but it feels like a compromise. A full remake of these characters should’ve come with updated artwork from Urushihara, or like Ys and Fire Emblem, built a new aesthetic that’s modern without sacrificing the franchise’s signature look.

Losing A Battle, Winning A War

Granted, even if the new artwork lacks even a single iota of the originals’ charm, Langrisser I & II is still a very solid package for SRPG fans. You’re getting two games with loads of depth and content, plus some of the more satisfying tactical gameplay in recent years. It’s an imperfect package, to be sure, and I can’t say I’d recommend it to just anyone.

But for strategy nuts and anime fans? Yeah, it’ll scratch that itch until the next Disgaea drops.

Related posts:
03/04/2020 Reviews Comments Off on Langrisser I & II Review: Legendary Weapons With A Side Of Tarnish
Hot News
World of Warcraft: Dragonflight – Enhancement Shaman Complete Guide
This Week In Pokemon: Scarlet & Violet Patch, Kissing Meowscarada, And More
The Callisto Protocol Has A PUBG Easter Egg, Despite It Being Removed From The Canon
Dragon Age: Dreadwolf Is Still "Deep In Development"
Sonic Frontiers’ Combat Nearly Became Like Bayonetta And Devil May Cry
Recent Posts