Avalanche’s Mad Max game was a fantastic adaptation of Mad Max: Fury Road’s world. Made as a tie-in game rather than a “play-the-movie” experience, the game perfectly captured the savage tone of the film it was loosely based upon. It also put the sand in sandbox and gave us a gorgeous world to play in. It sold pretty well, shipping 1.8 million copies, and received mixed but generally positive reviews. So why did the game fade from memory so quickly?

If brutal wastelands, serene skyboxes, chaotic car combat, and bone-crunching wrestling don’t rev your engine, then I understand that Mad Max isn’t the game for you. Despite generally good sales, even a stint as one of the PS Plus free monthly games couldn’t save it from relative obscurity. I really don’t get it. Here’s a game that fully understood its source material and had excellent gameplay and environments, yet it just didn’t stick. 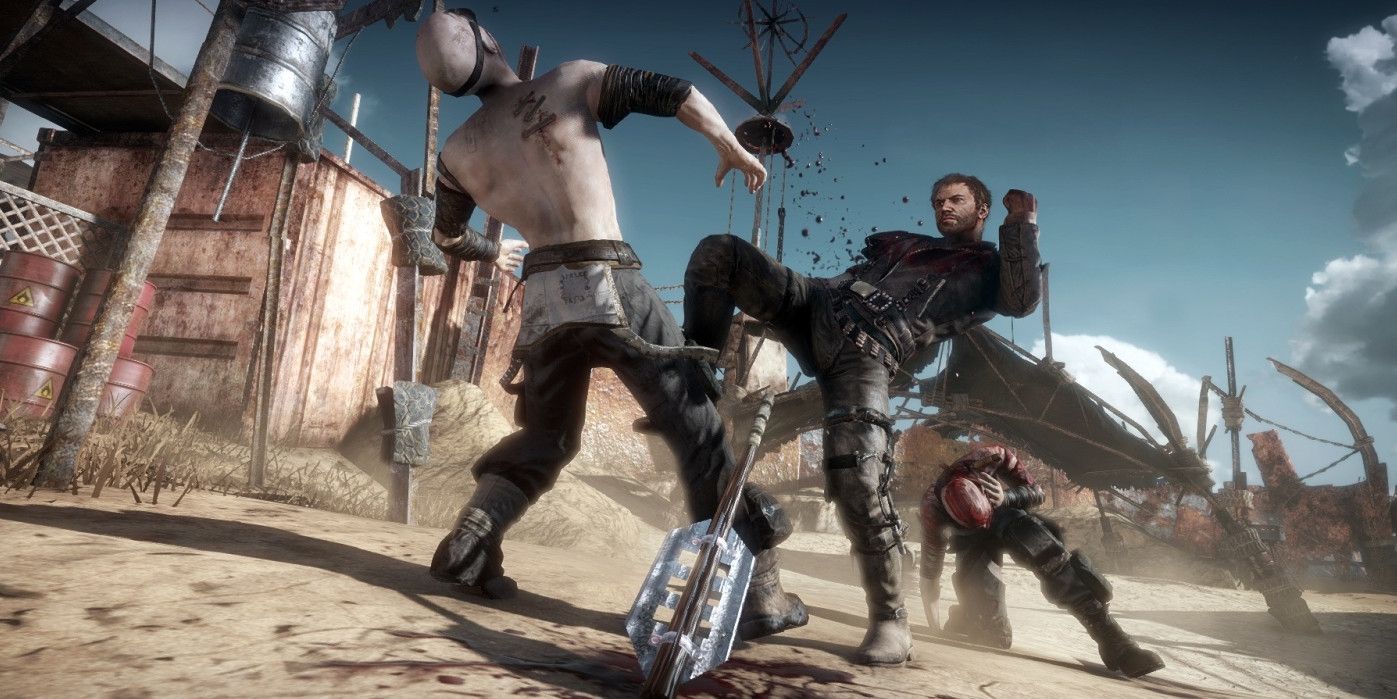 The most universally panned aspect of Mad Max is its story, and even I’ll admit I wasn’t particularly blown away by it. You play as Max, the titular protagonist of the film series. Traumatised by the tragic loss of his wife and child, and hardened by the brutality of the apocalyptic desert, Max’s only goal is to find peace and quiet. He wants to cross the plains of silence in the hopes of gagging the tormenting voices in his head. It’s a great setup for a Mad Max game, but the execution of the story is certainly lacking. While the game features a host of great characters – including one who has a chainsaw stuck halfway through their skull and one who teases you for getting into the wrong side of the car – the missions amount to little more than fetch quests. They either give you something you need to upgrade your car or enable you to find something to give to someone else who can then help upgrade your car. There’s some stuff thrown in about helping a woman and her child, but the game actually ends up telling that story in the incorrect order, so it loses some impact.

Apart from the lacklustre story, though, the game is near perfect. Hand-to-hand combat is weighty and has a good momentum to it. As you play, you can unlock new abilities that turn Max from a frail-yet-plucky brawler to a frenzied powerhouse. He’ll dropkick and suplex enemies to devastating effect, and the sound of crunching bones as hits land never gets old. The car combat is also incredibly fun. You can add shredders to your rims that tears cars apart, or simply ram them off cliff edges and into the sand below. You can also shoot tires off to send cars careening into each other, or throw explosive javelins at their fuel tanks to blow them up. Random sandstorms that can peel the skin off your bones, fling debris at you, pull your car into the air, and fry you with lightning also add a dynamic element to all combat situations whenever they pop up. They’re a marvellous sight to behold and force you to consider if it’s worth the fight or if you’re better off running for cover. 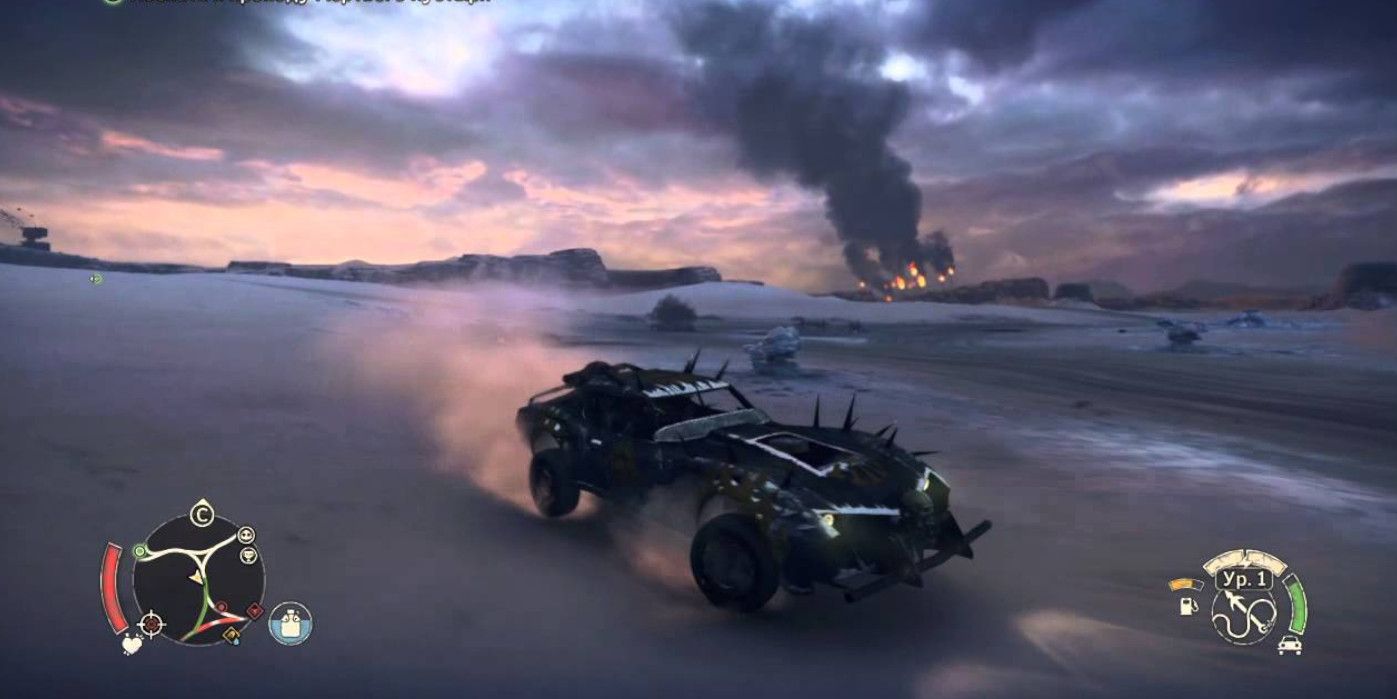 On top of the great combat, the upgrade and exploration system combine for some excellent ludonarrative harmony. You need water, fuel, and scrap to survive, so it makes sense that you’d scour the game’s many enemy bastions for those resources. Max also shares some memories of the world before the apocalypse whenever you find a collectible, a nice touch that adds some depth to both him and the world. Getting 100% completion in this game doesn’t feel like a chore because it always feels like there’s a point to what you’re doing. To top this all off, the gorgeous skyboxes contrast the harsh and desolate land you dwell within. Looking up at the stars helps to keep you and Max hopeful.

It seems that great gameplay and stunning visuals aren’t enough to keep people coming back, however. There’s also a distinct lack of an end-game in Mad Max. The only things you can do once you finish the main story are finish up side quests and get collectibles, which is hardly riveting enough to sustain long-term interest. A sequel would be great, but more of the same could quickly get boring. Avalanche did recently rebrand and is currently working on a new game that seems like some sort of horror shooter. There’s a chance this could be a very different Mad Max sequel, which wouldn’t be a bad thing, but there’s also a much bigger chance it’s something else entirely.

It’s a shame that good games get lost to time because of middling sales and mixed reviews. The discontinuation of Mad Max seems endemic of an industry that champions Metacritic scores over all else – Bethesda infamously withheld bonuses from Fallout: New Vegas developers Obsidian because the game missed out on its target of 85 on Metacritic by one point. Hopefully, we’ll get a sequel in the future, but for now, I think I’ll take my car for another drive across the barren and beautiful desert.

Related posts:
06/02/2021 Reviews Comments Off on Mad Max Worked Because It Understood The Source Material, So Why Did Everyone Forget It?
Hot News
bisoprolol fumarate
alcohol and aciclovir tablets
buy cheap diclofenac no prescription usa
buy allopurinol australia no prescription
buy detrol no prescription
Recent Posts