Society is full of unrealistic expectations. Young people, especially today, are expected to grow up and fit into neat little boxes that ensure they contribute to the world so it simply keeps on ticking, maintaining a status quo that shows no signs of changing. In fact, political and environmental issues are only growing worse, so newer generations have a right to fight back against the state of affairs they’ve been unfairly bludgeoned into.

Before he was really into teenage romance and gorgeous time-lapses, beloved director Makoto Shinkai delved into more nuanced issues like this with his films. Garden of Words is a sombre, platonic examination of two people who have lost themselves. Hiding away from a society that has labelled them as problematic, they have no choice but to find solace in each other. It’s an adorable circumstance of melancholy distilled into 45 minutes of animated brilliance, and shows a side of Shinkai that I’m starting to miss.

Like many of Shinkai’s films, Garden of Words follows two central characters who find themselves with daunting obstacles to face. Takao Akizuki is a young boy in high-school who isn’t one for traditional education. His family life is fractured with a mother who sleeps around and a brother who is moving in with his partner and leaving him behind. With nobody left to turn to, he buries himself in work and the art of shoe crafting, a hobby he slowly but surely wishes to make into a career. 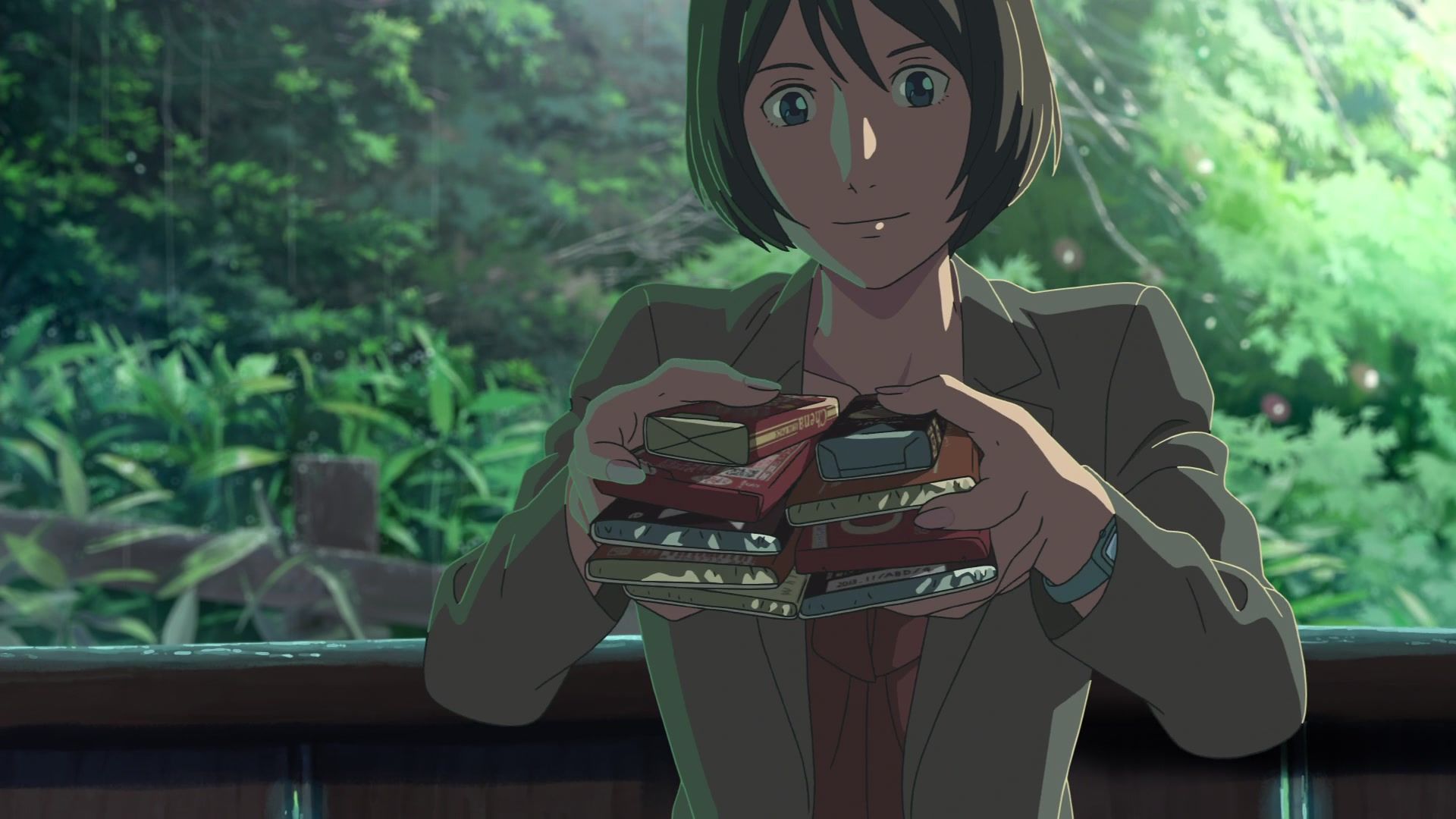 By pure coincidence, a stumble through a rain-drenched Shinjuku park leads him to seek shelter beneath a veranda, tending to his sketchbook instead of bothering about schoolwork. This solitude is broken by the presence of Yukari Yukino, a school teacher who skips work due to personal reasons that won’t become clear until the film’s conclusion. Sipping beer and eating chocolate first thing in the morning, Yukari is the definition of yikes, but there’s something warm and empathetic about her presence.

So, the two young souls sit in silence, with Takao occasionally breaking the awkwardness with small nuggets of information about himself, showcasing the vulnerability you’d expect from a teenager with nowhere else to go. Yukari is otherwise quiet, chiming in with cryptic phrases and quiet observations on her own life as they’re reflected in the passionate boy before her. It’s a wholly platonic relationship, removing romance from the equation in a medium that would normally latch onto it and never let go. A confession rears its head towards the end, but it’s one based in misunderstood puppy love, rather than a narrative crux the film must rely on.

Takao’s confidence grows as Yukari only shrinks further into her isolatory shell. Rainy mornings of social conversation feel woefully one-sided, with the tumultuous weather proving a perfect tonal companion to our two central characters. The weather is a character in itself in Garden of Words. Rain is a sign of comfort, partly because it requires one to take shelter, to feel protected and unafraid to divulge in their most sensitive secrets. 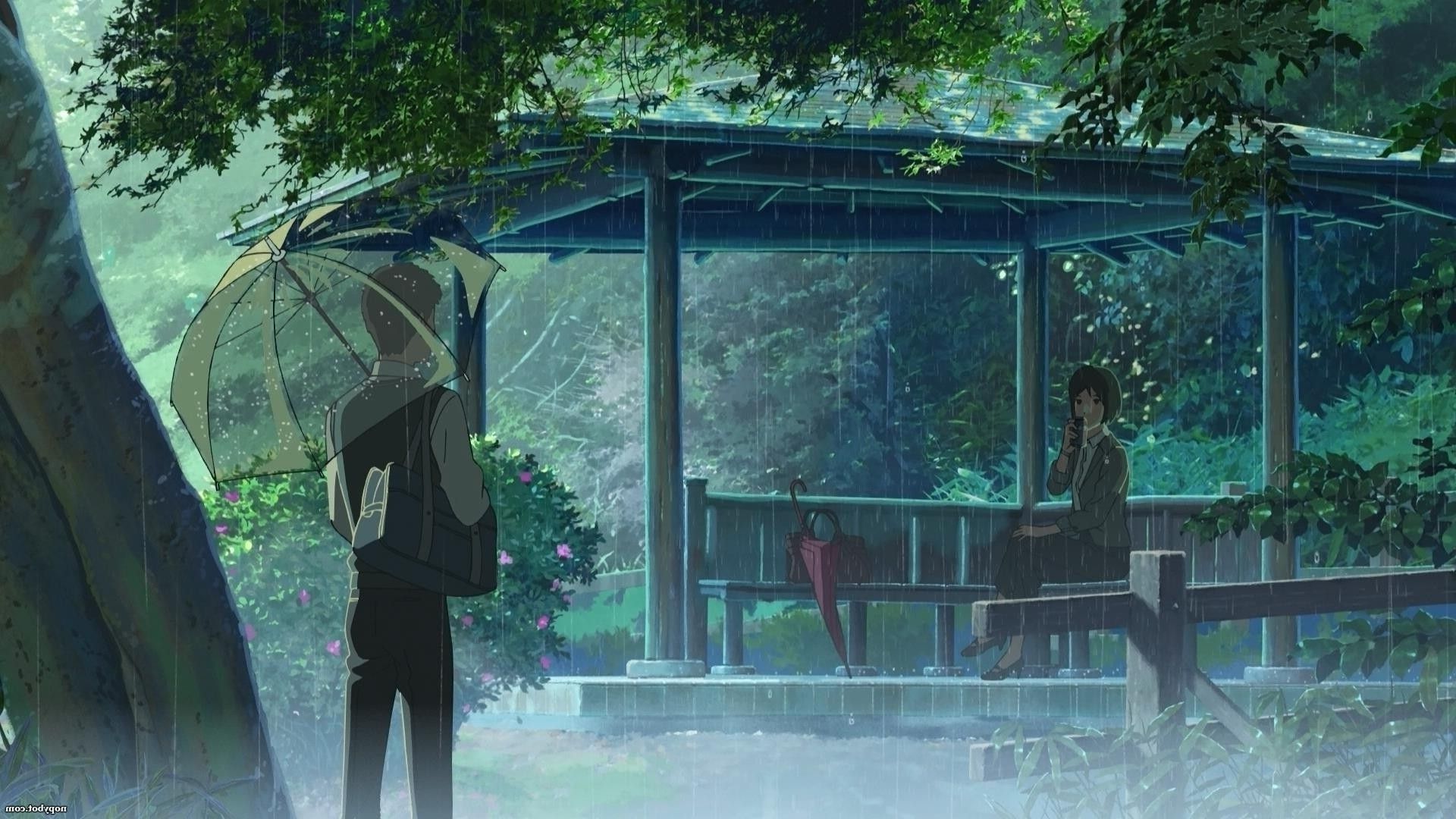 When sunshine does return to the lives of Yukari and Takao, they are driven apart, pushed back into their daily routines and encouraged never to look back. It’s a bittersweet separation that is eventually quelled as the two reunite upon Yukari leaving her job, a newfound lease of life represented by a mixture of sunshine and rain splintering through the sky. Neither of them are afraid to walk in the sun anymore, the rain no longer acting as a watery guardian over their emotions.

I won’t spoil the final act for those who’ve yet to see the film, but its defining message is learning to walk again, and forging a path that is yours and yours alone. To achieve this sometimes tough decisions must be made. People might be hurt or left behind, but it’s these sacrifices that define who we are and want to be. Yukari and Takao are two individuals refusing to accept the future being pitched to them, finding their own ultimatum and fighting past adversity to achieve it.

Takao’s chosen profession as a shoemaker is no coincidence – he’s the arbiter of moving forward, crafting objects people can wear with pride as they move towards their ideal life. He’s found his passion, while Yukari dwells in an occupation she’s still unsure about. Like many of Shinkai’s earlier works, the ending is left purposely ambiguous. Whether these two characters will meet again upon going their separate ways is left for the viewer to decide, but I left Garden of Words with a teary, positive smile on my face. 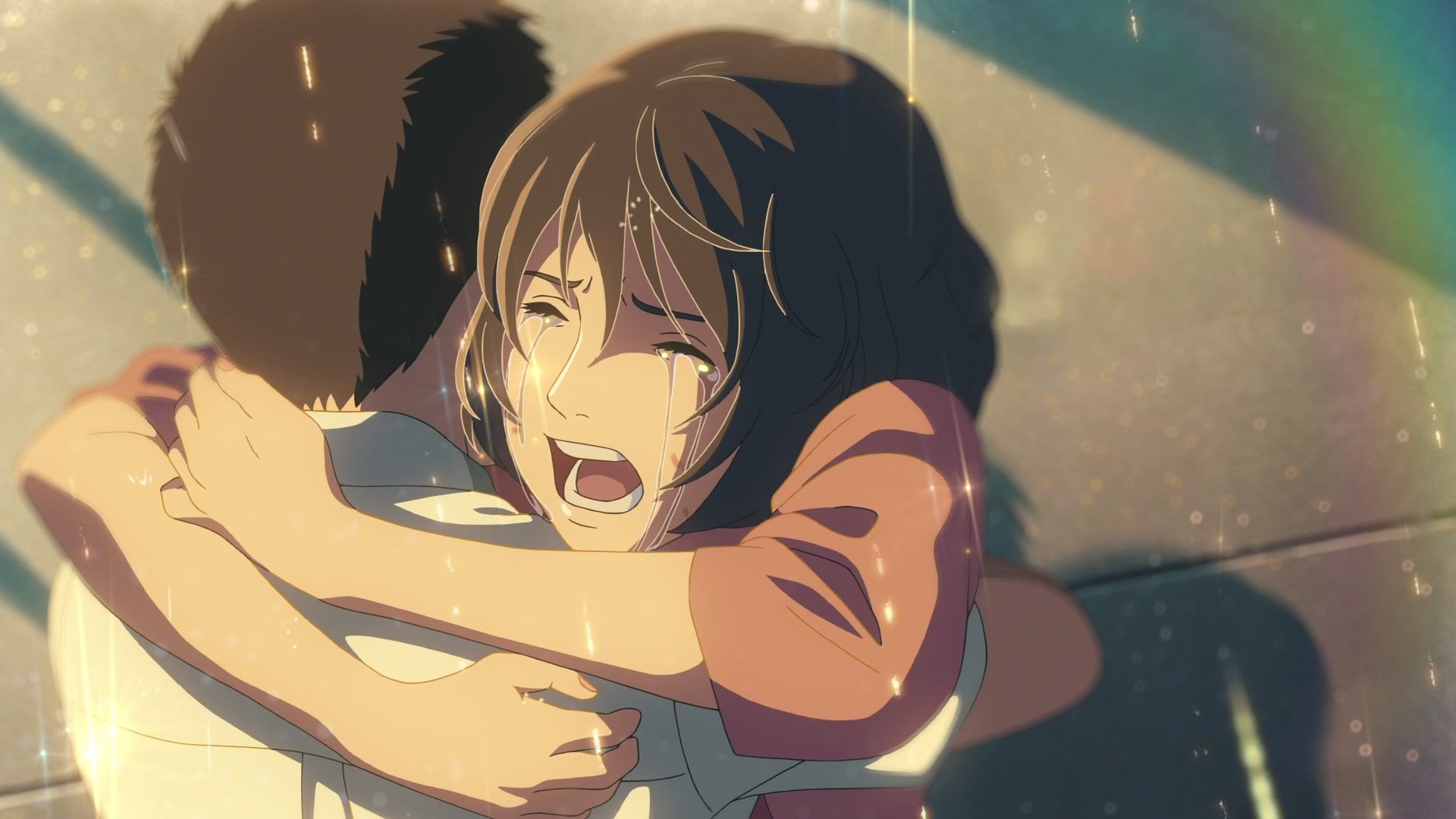 After this film, Shinkai would go onto global stardom with Your Name and Weathering With You. While his approach to storytelling remains poignant and layered with heavy themes beyond the central romance, they lose the subtlety I adore from Garden of Words. The endings to his teenage romances inspire hope amongst his audience, while this feels far more stark, contemplative, and akin to real life.

We’re expected to empathise with Takao and Yukari, recognising they’ve gone through a situation many of us will, and sometimes saying goodbye and clinging to the hope we’ll see someone we care for in the future is the only way forward. Garden of Words also doesn’t have enough time in 45 minutes to explore the inner workings of these characters, but as a dramatic study of standing up against society’s constraints, this is some of the best work anime has ever seen. The song at the end is a stone-cold banger, too.

Next: Weathering With You Could Have Been So Much More 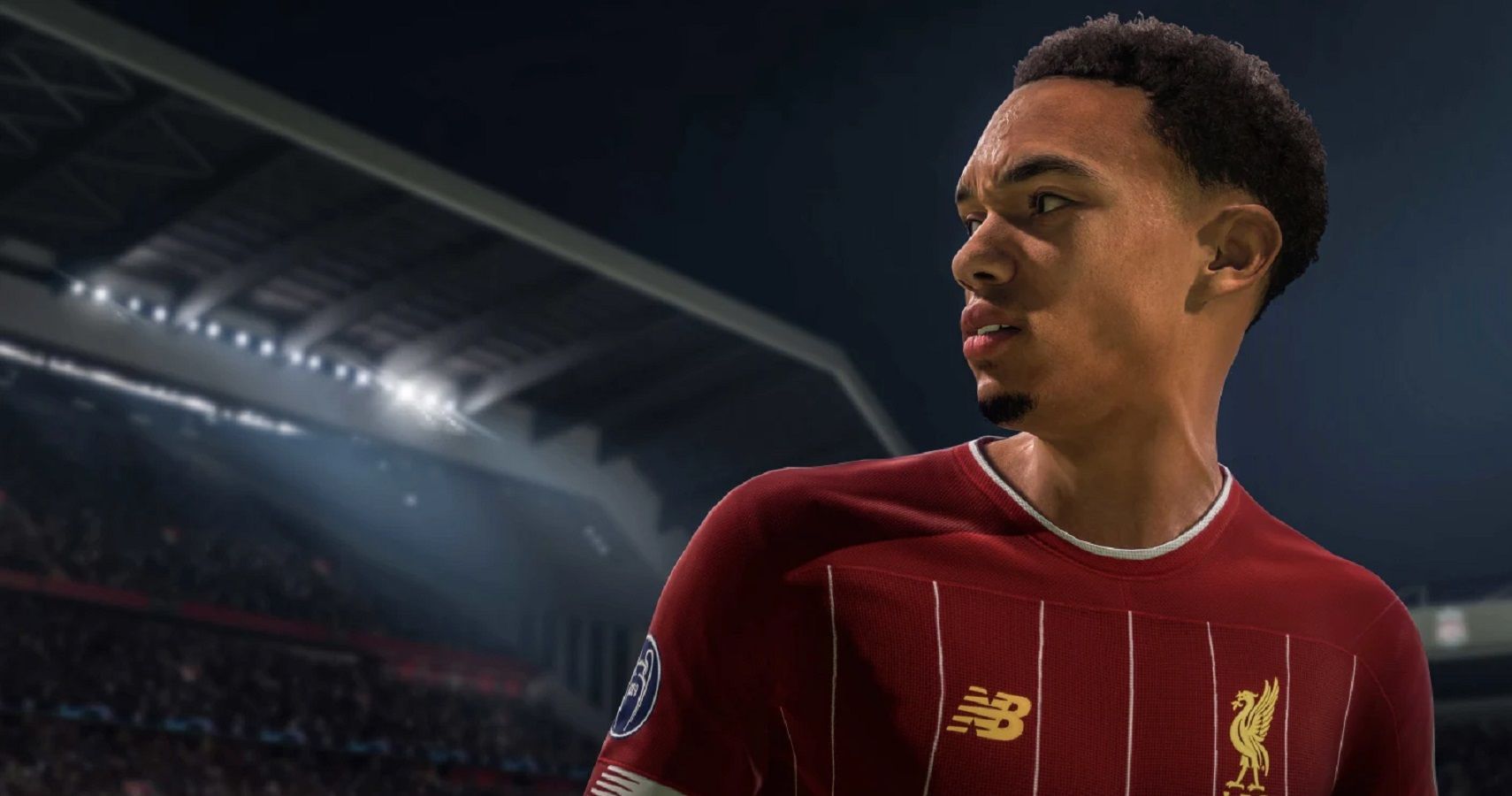 Jade King is one of the Features Editors for TheGamer. Previously head of gaming content over at Trusted Reviews, she can be found talking about games, anime and retweeting Catradora fanart @KonaYMA6.

Related posts:
04/06/2021 Reviews Comments Off on Makoto Shinkai’s Garden of Words And The Hesitance of Accepting Adulthood
Hot News
a cipro in ottobre
Falcon And The Winter Soldier Producer Confirms There Will Not Be A Chadwick Boseman Cameo
Days Gone 2 fan petition about to reach 10,000 signatures
New Pokemon Snap Sets Meganium As Custom Twitter Emoji
bactrim coumadin interaction
Recent Posts