I love Mass Effect, although in conversations about BioWare’s iconic space opera it often becomes clear that my reasons for this love are generally quite different from other people’s. Sure, the suicide mission is nice, but it’s nowhere near my favourite one. Garrus is my friend, but not my best mate. I mostly like how the narrative progresses, although I like Andromeda more than Mass Effect 3.

Do you know what all three of those stances have in common? A species of great, big, four-testicled muscle reptiles called the krogan.

Wrex is my favourite Mass Effect character of all time. Grunt is my second favourite and Andromeda’s Nakmor Drack is my third. My gold, silver, and bronze squadmate medals all go to the krogan because they are amazing. At face value, you might just think their slightly subverted hard-boiled archetypes make for decent comic relief. The jokes about quads and ryncol function as decent gravitas control after climactic narrative set pieces, while talking with bullets instead of words is a good foil for a Paragon Shep and an even better companion for a Renegade. 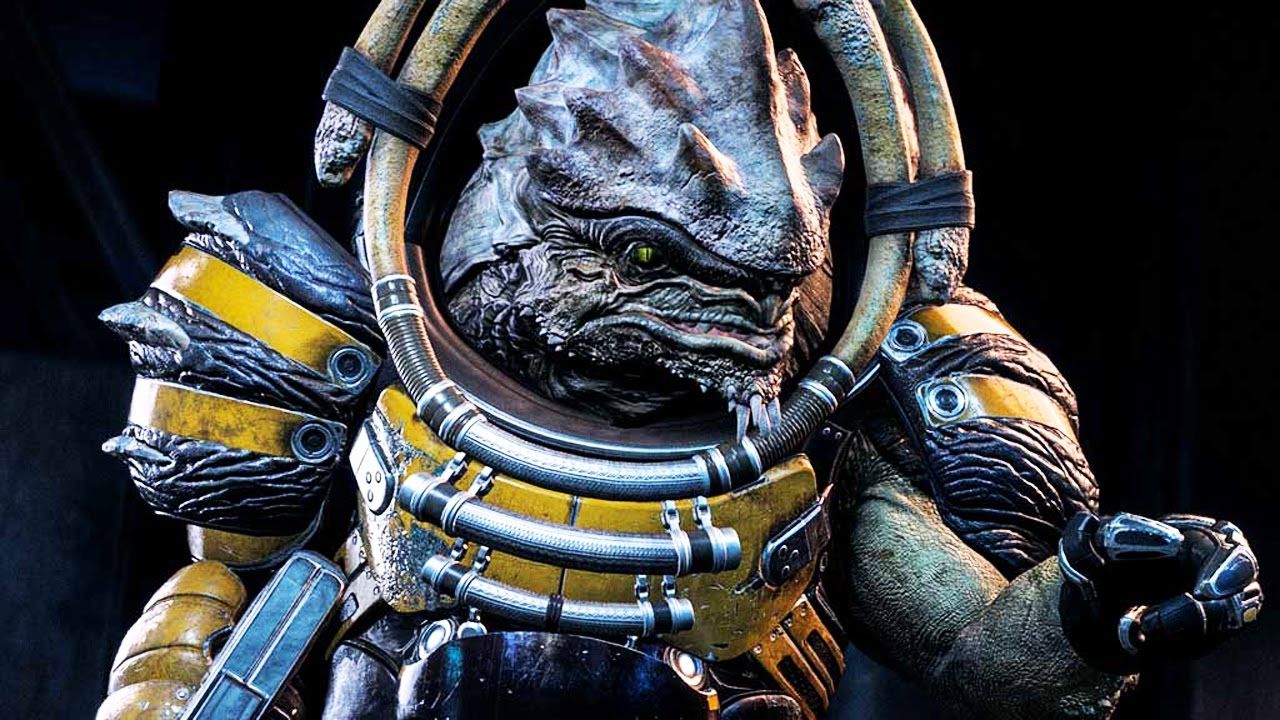 There’s a lot more to the krogan though, isn’t there? For a series that is so ideologically and politically stuck in the past, where human biotics represent a gross, jingoistic conglomerate formed between both arms of the military-industrial complex, it’s refreshing to see a group that are more aligned with punk values – and the krogans are punks in the truest sense of the word. People often associate punks with mohawks and vandalism, opting for Hollywood’s misleading image of the “Punk Rocker!!!” instead of any real, historical emblem of the movement. In reality, punks were and are pretty quadsy. They might have a mohawk, or they might wear a sweater vest – admittedly, “might” is doing a lot of heavy lifting on that second one. The real essence of punk is freedom, though, which is naturally intertwined with a kind of mutually assured care that never quite makes the cut in films and texts that choose aesthetic over substance. It’s a lack of judgement and a conviction to truth, a raw and emotional scream that carries far more meaning and power than any audibly recognizable word or term. It’s pure and unpretentious, and it’s a spirit that is deeply imbued in the core of krogan values.

Urdnot Wrex is Mass Effect’s biggest punk. He’s got an exterior rougher than a bear’s arse and his shotgun does more speaking in a day than his tongue has in a millennium – or so it seems. Sure, Wrex is a grisly merc, but when you look deeper there’s a whole lot more to him, especially as the series progresses. As opposed to killing for credits, Wrex goes back to Tuchanka and unites the krogan clans – and what is punk if not the pursuit of unity among the disenfranchised? Wrex wants a cure for the genophage, but he’s not like his warmongering father before him. He doesn’t want to colonize planets, he doesn’t want to build dreadnoughts, he doesn’t want to ignore the connections he made on the Normandy with people of all species and become some kind of indiscriminately shitty bigot. Even when the world is against Wrex, he’s sufficiently punk to not retaliate with a fake punk charade.

What’s more, Wrex and Grunt are two of the most loyal squad members in the entire trilogy. Sure, Wrex pulls a gun on you in Virmire – but is there anyone else in the trilogy you clash with to that extent? Tali, maybe, or Legion. That’s after knowing them for an extremely long time, though. Wrex sees a cure for his people and still defers to your judgement because he is a friend first, squadmate second. Grunt, on the other hand, sacrifices himself to save you – unfortunately for him, he’s too much of a tough son of a bitch to die and shotguns his way through blood and viscera to party with you in your Citadel pad. The krogans are almost universally misunderstood and mistreated, and yet they are the most likeable, trustworthy, and dependable people in the galaxy. I think a lot of that comes from their origin in true, free-spirited punk. If Chora’s Den ever took a break from trance and techno, you’d better believe Urdnot Wrex would scream the house down.