“I wanted the kiss to be in the first ten pages, and then the rest [of the book] is figuring out the repercussions of that and if they can be together,” Molly Knox Ostertag tells me about The Girl From The Sea, a new graphic novel that aims to circumvent many of the cliches we’ve come to see in queer media over the past few years. It seeks to be more than just a journey that culminates in a romantic connection, but also one that explores relationships in terms of both the joys and repercussions that come with them. The queer experience is messy, delightful, and oftentimes unpredictable – especially for those who are still uncovering who they are and want to be. Launched earlier this week, The Girl From The Sea achieves this to great effect – I caught up with Ostertag to talk about its creation, inspiration, and characters.

The Girl From The Sea follows Morgan, a young girl living in the Canadian province of Nova Scotia who contends with a troubled family despite having a close circle of friends who support her. This inconsistency in her life is only further compounded by the fact she’s a closeted lesbian struggling to accept her identity. Like many queer people, coming out can feel like labelling yourself as a burden, forcing society to accept you as something out of the ordinary while also subjecting yourself to potential bigotry. It’s false paranoia, with the world’s depiction of queer people forcing us to label ourselves as outsiders, individuals who are designed to not be accepted. Ostertag wanted to fight against this in the wider narrative, following Morgan as she struggles to accept herself due to the environment in which she was raised.

“Morgan meets a half-seal girl called Keltie,” Ostertag tells me with a grin, expressing a genuine love for these characters. “Keltie is a Selkie, meaning she can take off her sealskin and turn into a cute girl. And so she and Morgan fall in love and Keltie’s like ‘alright we are going to pursue our fortunes on the land!’ I think a lot of the books I read have a core scene where everything builds out from and the core scene here is Keltie coming out of the water and Morgan’s like ‘Oh my god, no, we aren’t doing this’ but Keltie is in love and wants to go on adventures. That fun dynamic is what leads to the rest of the book. It’s definitely maybe a little bit lighter and sweeter, but there’s some bittersweet drama.” 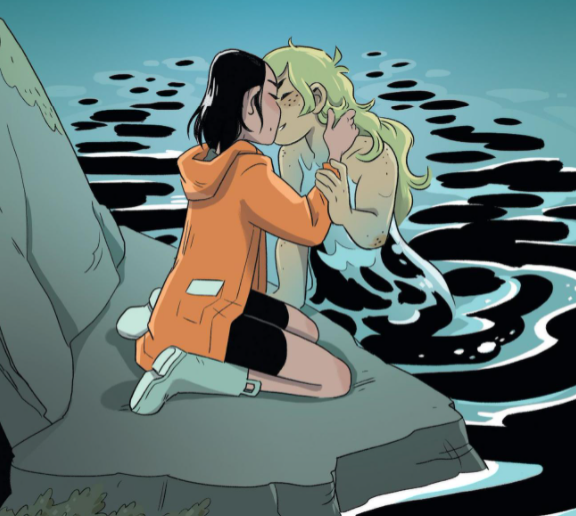 Keltie comes from another world, an underwater kingdom where the ignorance and prejudice that defines humanity simply don’t exist. She’s fallen in love with a cute girl and doesn’t see a problem with expressing it – whether it be through cuddles, kissing, or voicing how much she adores Morgan to those around her. As you’d expect, this causes more than a few complications, while also forcing Morgan to understand the importance of her own identity, and how hiding your true self away can unintentionally hurt those around you. “She totally doesn’t get it,” Ostertag says about Keltie’s character. “My family is very accepting and the area I grew up in is very liberal. But I still remember having queer feelings when I was a teenager and thinking this was absolutely not a direction I could explore. So much of coming out is about a specific kind of homophobia, and I really didn’t want to show that to anyone. But I did want to show the fear of knowing I’m going to be separated from my female group of friends. Am I going to potentially identify myself as a predator and will they not let me in their group anymore? That’s something I remember feeling really, really strongly and I kinda wanted to explore those fears. Keltie just does not know about any of that.”

Heteronormativity is a cruel mistress, and Ostertag hopes to analyse the pressures it places on queer people while also exploring a year in a slowly blossoming relationship. As I mentioned earlier, such stories often finish with a confession, leaving viewers and readers to fill in the blanks and hope their favourite couples live happily ever after. It’s largely because corporations struggle to accept queer characters at the best of times, so a cutesy scene at the conclusion of a show or film is often all we get. It’s not enough, and The Girl From The Sea is one of many projects that hopes to buck that trend. “I just wanted to show a year of a relationship,” Ostertag explains. “There’s so much romantic media in general that’s about the build up, will the characters get together?… [With this story] it’s about if Morgan can stay closeted and have this magical Selkie girlfriend at the same time. Morgan is the one I relate to the most because she’s trying to be everything for everyone. The parts of herself not for other people – she’s putting [those] in a box and dealing with it on its own. Now someone else is being introduced into the picture, with Keltie being like ‘these parts of you are the parts that I love, are you going to put me in a box too?’” 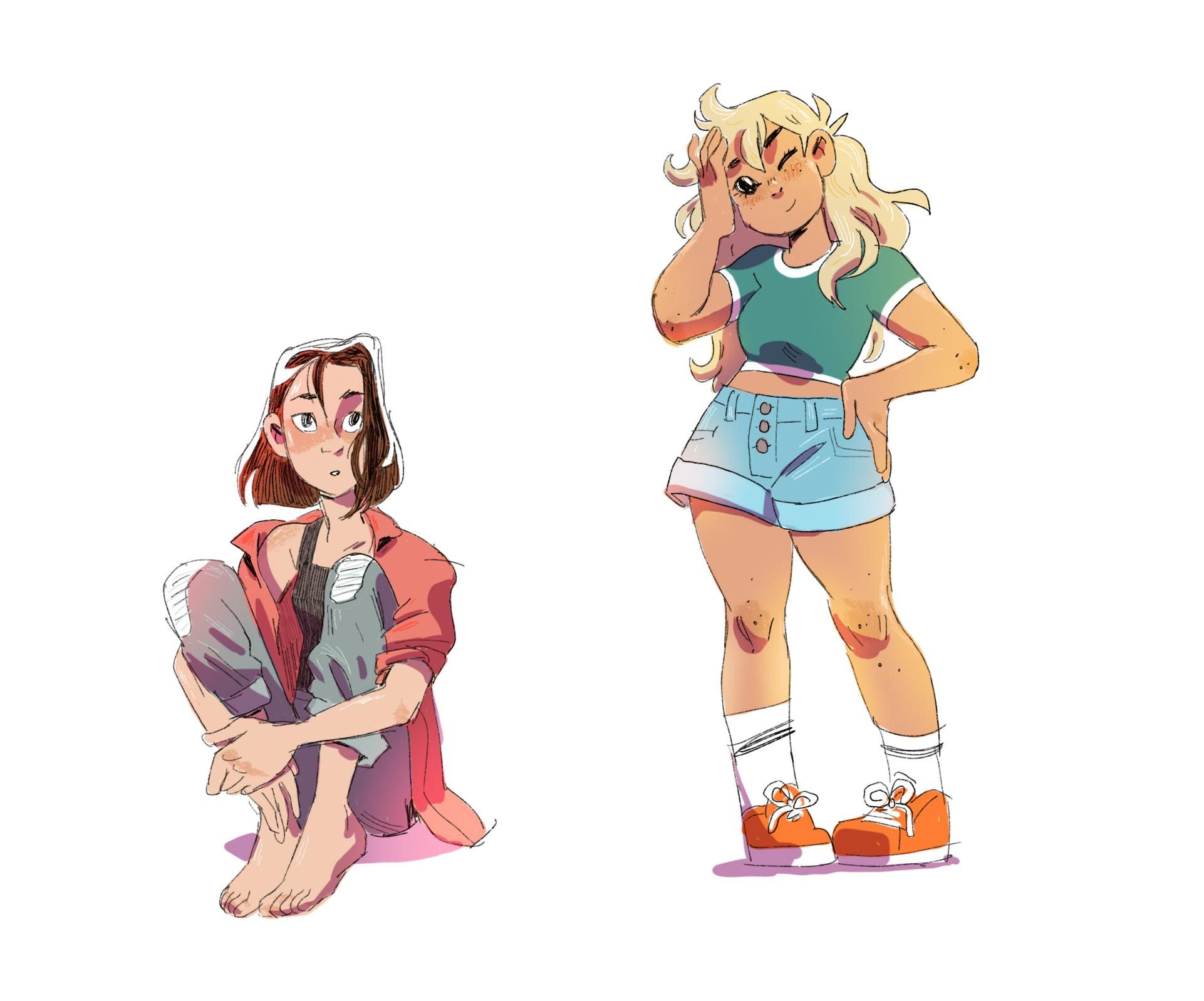 We didn’t delve into specific plot details or spoil anything major, but Ostertag made it clear to me that she “wanted to be very specific about the identities of these characters and their real world struggles” This central message bleeds through every page, combining a mixture of wondrous romance with poignant drama in a way that readers both new and old can relate to. It’s a journey of honest self discovery, and refuses to hold back when it comes to depicting the obstacles young people will face, but also the rewards that await them for accepting who they want to be.

Despite blazing a trail of her own in the world of queer media, Ostertag still recognises some of her own shortcomings, naming a number of themes and identities she’d love to tackle with future books, animation, and creative endeavours. “Whatever the next project I do is, I really want to have some butch lesbians in it, because I feel like I’ve seen so few butch women in any media at all, including lesbian media” Ostertag tells me, reflecting on how queer media can often abide by heterosexual standards of attraction. “That’s a challenge I’ve set myself, because when I think of a teen lesbian story it’s like they both have to be femme and have long hair, but that’s just not my experience. So how can I be more true to myself? I presented them in that way because I knew it was appealing, and this is what a lot of lesbian media looks like. I know that people are going to be drawn to this, but how can I also show the joy and beauty of being a butch lesbian?”

This wish to see more diverse and unconventional perspectives bleeds into the advice she offers young creators, those who might be looking at her work and wanting to build upon it. “I really want to see people exploring more complicated queer stories,” Ostertag tells me. “For so long we’ve felt like we have to represent ourselves to straight, cis society and be like ‘Here we are, look at us, there’s no conflict’ and we’re all the most beautiful versions of these identities. I want to read the stories that are like ‘No, I’m ugly, I’m messy, I’m doing bad things, but that doesn’t mean my queerness is bad.’ It’s still a complicated story, and that’s the kind of stuff I really want to see next.”

The Girl From The Sea is now available to purchase both physically and digitally.