Developer Sleepy Spider Studios has released Project Aether: First Contact on Steam following its successful Kickstarter campaign. Following the successful testing of AETHER Mech, an unrecognized threat appears from beyond looms over the solar system. Players take control of a mech in this tactical space shooter that combines classic arcade-style twin-stick action and a unique take on the bullet hell genre of games that is great for veterans and newcomers alike, with one of the best soundtracks that mixes nostalgia with cyberpunk vibes. 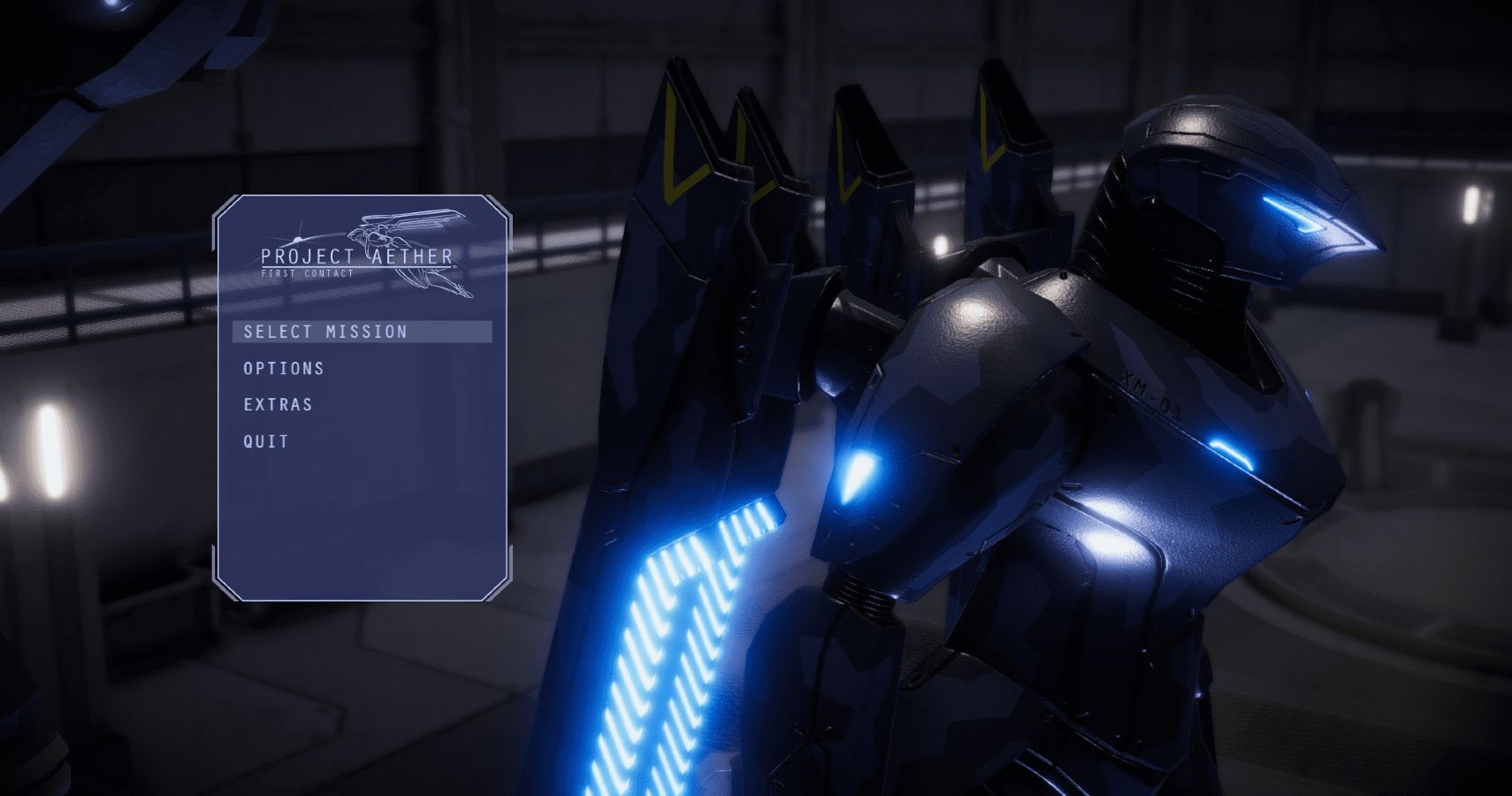 A Friendly Introduction To The Bullet Hell Genre

Like most twin-stick, bullet hell shooters, players take control of a single unit with a variety of weapons to tackle a stream of opponents that enter view from the top of the screen. Unlike most bullet hell games, Project AETHER provides a casual, friendly environment in which to excel. Instead of being killed by a single projectile, as is the case in many old games, players have a health bar that gradually depletes with every hit taken, which can be restored using repair kits. 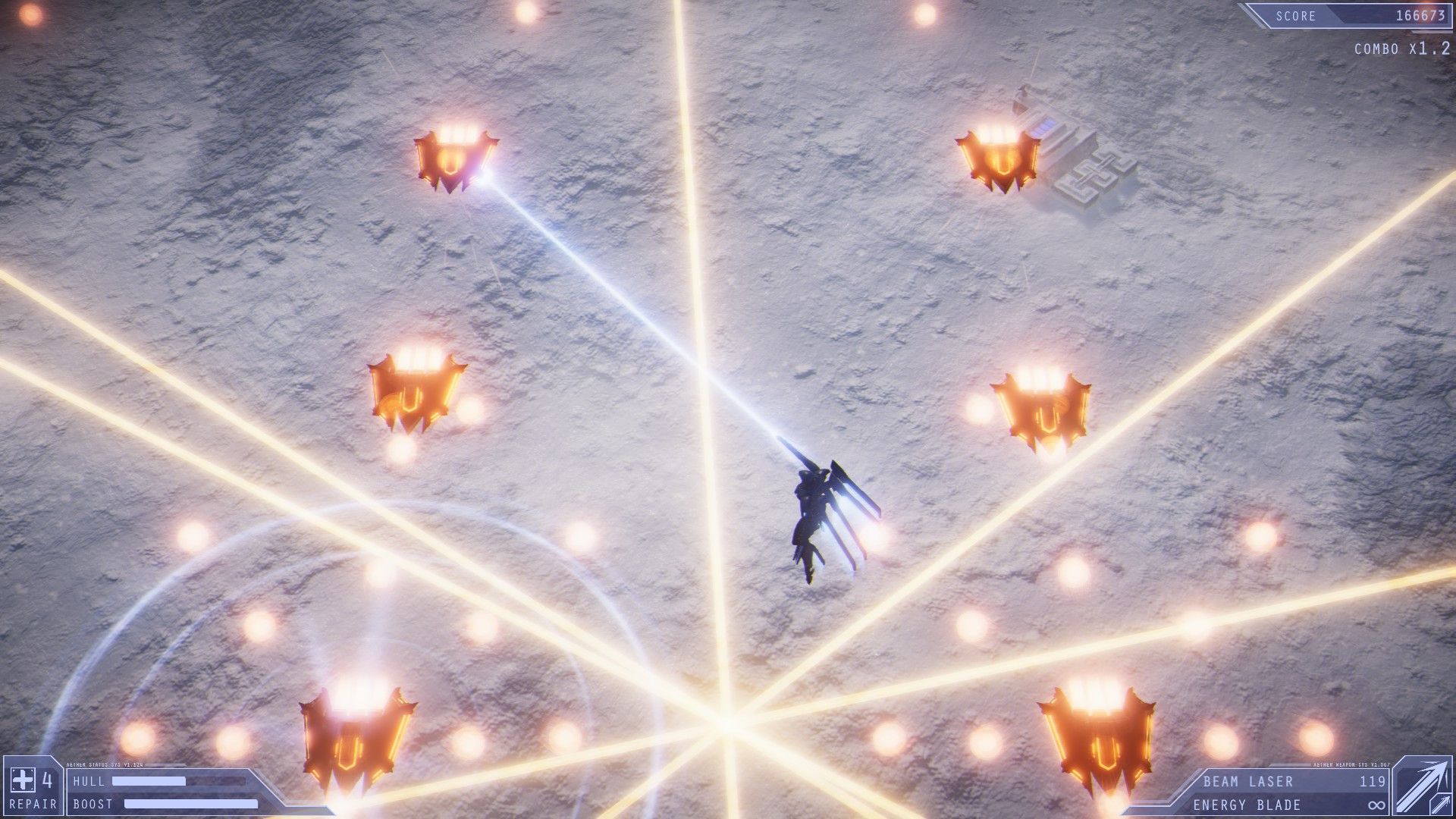 In addition, players can mitigate incoming damage by using a dash that has a short cooldown providing a moment of invulnerability during the animation. This allows players to glide safely out of the most difficult of situations, something that is particularly useful in the later levels as the projectiles, laser beams, and enemies seem to fill up almost every part of the screen. In this regard, Project AETHER does a fantastic job of creating a game that players of all skill levels can enjoy and is not limited to die-hard fans of other brutally difficult bullet hell games.

At first glance, it might seem like running and gunning is the best way to deal with the alien threat, but there are far more effective ways of winning the day. Players begin the game with four distinct attacks, all of which are useful in their own way. By default, players start with the assault rifle and railgun at the beginning of the game. 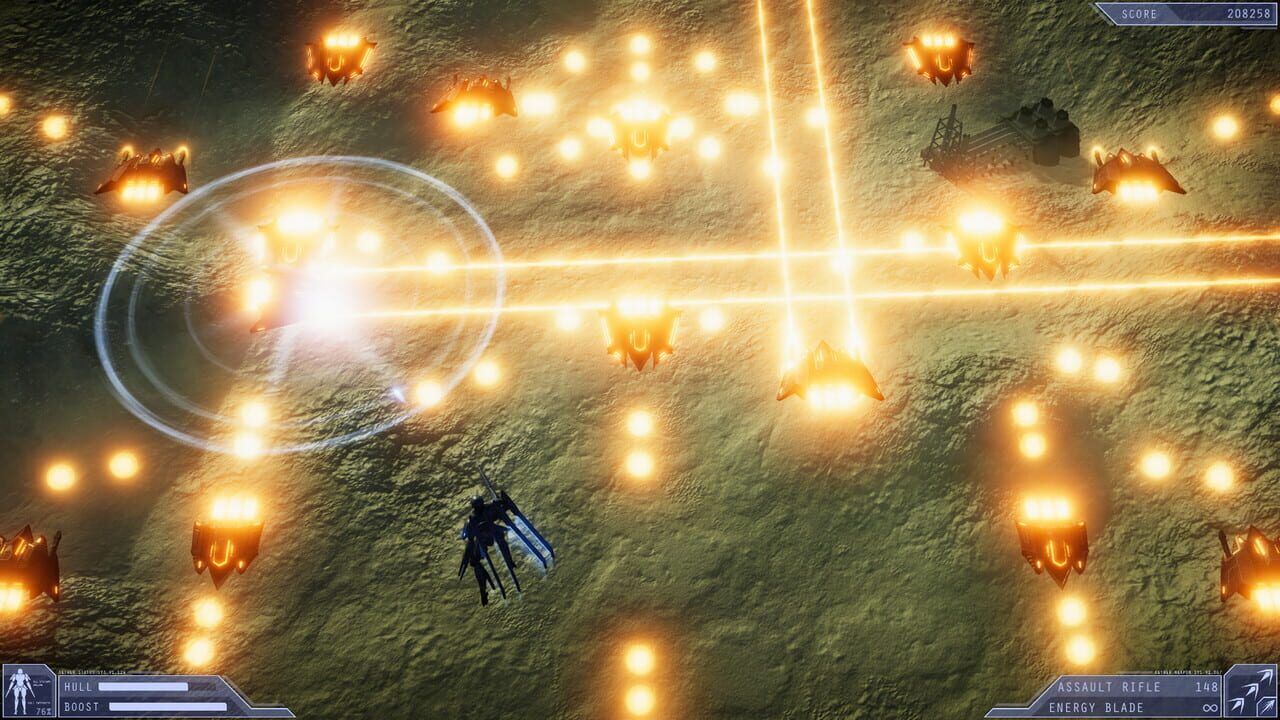 The real strategy comes in the strategic use of an EMP blast. As players deal damage to an opponent, they will see a ring begin to grow around their target, which means that the enemy unit is ready to be detonated. This can be done by either switching weapons and firing once with the rail gun, or by entering the radius of the circle and setting off the explosion manually.

Any opponents that are caught in the radius of the explosion are also destroyed. This makes for some strategic decision making as more and more opponents enter the screen. Players can also force opponents to change position, at least in part, thanks to their fourth attack which comes in the form of a sword melee weapon. Each of three successive sword swings pushes opponents back, and helps prime them for an EMP blast next to other opponents.

In most cases, the developers have set up waves of attackers to be a sort of puzzle, rewarding players for dodging attacks and grouping up the biggest opponents to explode with one well-timed EMP blast. This aspect of the gameplay really stood out during the early demos shown off by the developers and has been well integrated into the flow of combat.

As players progress, they acquire different weapons that shift how each level can be tackled. There isn’t a large degree of customization beyond the changing of a few weapons, but it still provides a shift in gameplay. This reviewer also enjoyed the challenge of completing wave after wave as a pacifist, neither shooting enemies or taking damage, and instead, boosting across the screen to avoid hits as the enemy passed by. This works for most waves, except for a few where certain opponents will follow you around until they are defeated, and of course, all boss battles.

Overall, the gameplay is solid, the casual nature is inviting to all sorts of players, and the design decisions really make Project AETHER a pleasure to play. The only exception to this statement lies the dialogue and voice acting being passable, at best, but mostly being awkward and unnecessary.

Although there is a story to be told, too often it feels as though the three characters and their chattering is an interruption in the action that breaks the pace of the game. Beyond that, the character labeled as Specialist, a man tasked with monitoring the AETHER mech and its pilot, comes off as creepy and awkward. Right from the beginning, his dialogue is peppered with lines that make us wonder how long he’s been obsessively in love with the pilot, which might not be so bad if the world wasn’t being invaded by an unknown alien force.

A Short Game That Would Benefit From A Level Editor

While the core gameplay is quite good, the game does feel a tad on the shorter side. There is a total of nine levels, though that number is not exactly accurate if we consider the first two or three as training, or extended tutorials. The real fun picked up by about the fourth level, which provides a rather large spike in the number of enemies and projectiles on screen and has some interesting and unique bosses to deal with at the end.

Given the innovation that players have access to in the toolkit of the AETHER mech, this game would truly benefit from the inclusion of a level editor. We have already seen what kind of outstanding creations a passionate community can make in games like Portal 2, Skyrim, and Super Mario Maker 2, and the ability to make our own levels would certainly extend the life of this game. As it stands, Project AETHER feels like a game one might pick up and enjoy, but after beating it once or twice, may find little reason to return.

In the end however, these two complaints are minor, and developer Sleepy Spider Studios has done a great job in making Project AETHER: First Contact a pleasure to dive into.