Stepping out of Holborn station and walking towards the Kingsway tram tunnel painted a very specific picture in my head that this iteration of Batman was going to be grounded. Instead of a cave under a distant mansion, this Batcave sat stealthily in the middle of London. I know it’s not the actual Batcave, but it gave off the same down-to-Earth vibes that we’ve seen in the trailers and marketing materials.

Red and white lights lit the pathway down into the tunnel, and posters of Batman, Catwoman, the Penguin, and the Riddler lined the walk. It wasn’t subtle, but it got me excited to see the new Batmobile. It’s had a lot of on-screen iterations over the years, and this Mad Max looking custom muscle car looked right up my street.

The first things I saw once I stepped into the tunnel were Robert Pattinson and Zoe Kravtiz’s Batman and Catwoman costumes. Unfortunately, the only rule at the event was no touching, so I didn’t get to hold Robert’s hand or kiss his fe- The costumes looked fantastic. Batman’s outfit has a thigh holster, utility belt that looks like it came out of a surplus store rather than a sci-fi set, and worn boots that look like they’ve seen some action and need a good tongue cleani- Catwoman’s costume is comparatively bare, but the different textures and shades of grey and black make it seem sneaky, while the ripped cat-eared balaclava adds to the homebrew style. 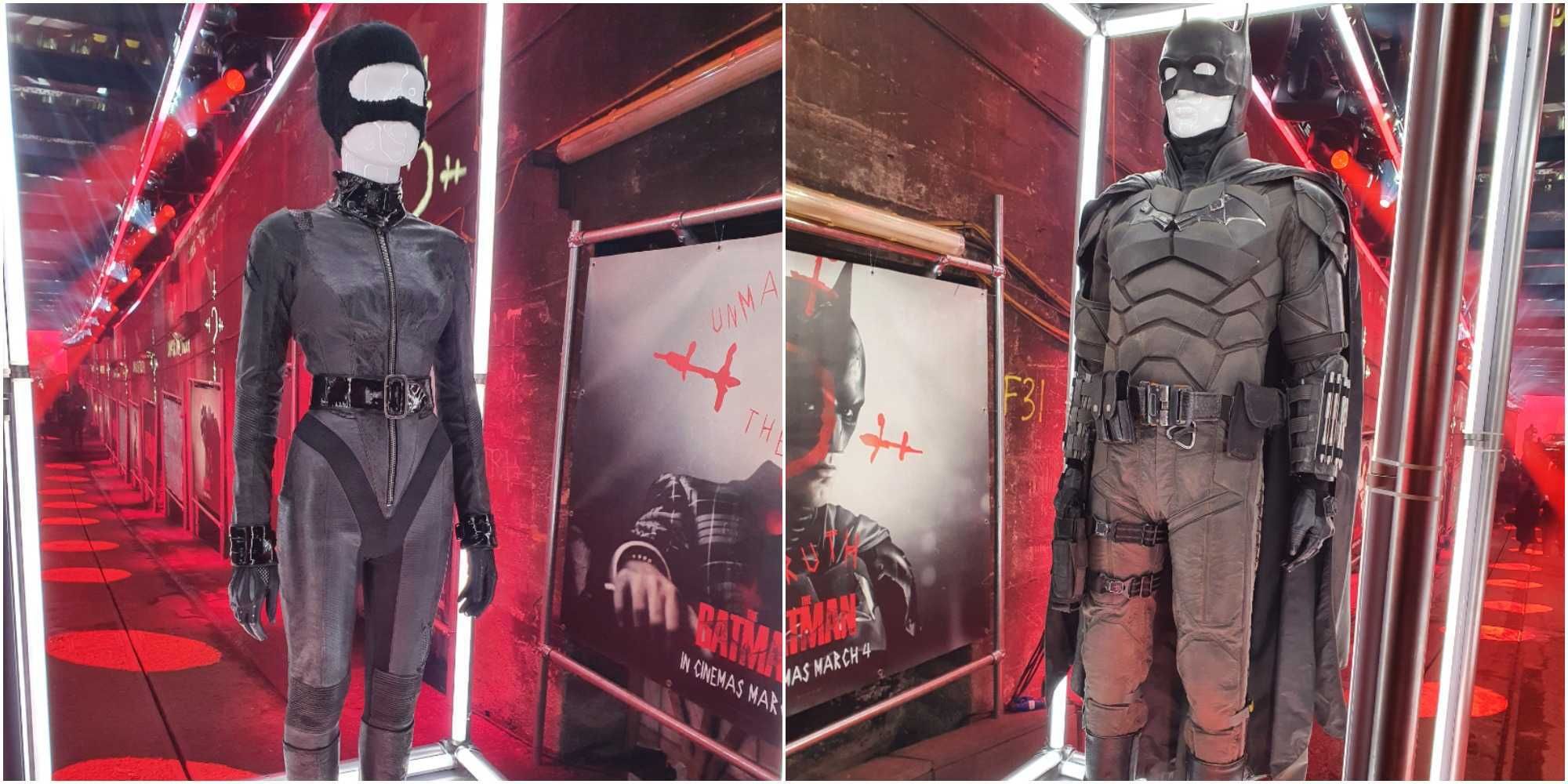 They each seemed like they were made by a real person rather than a full production team and costume designers. I know that’s exactly how they were made, but they give off a DIY aura that, once again, makes the film seem a lot more grounded than more recent comic book movies.

The two costumes were displayed on mannequins at the tunnel’s entrance, and Pattinson’s pout is strong, even in statue form. These were just brief appetizers for the main course that stood proudly on a platform at the end of the long passage. It was lit up by more red and white lights and had a large screen behind it that showed Batman himself surveying the scene. 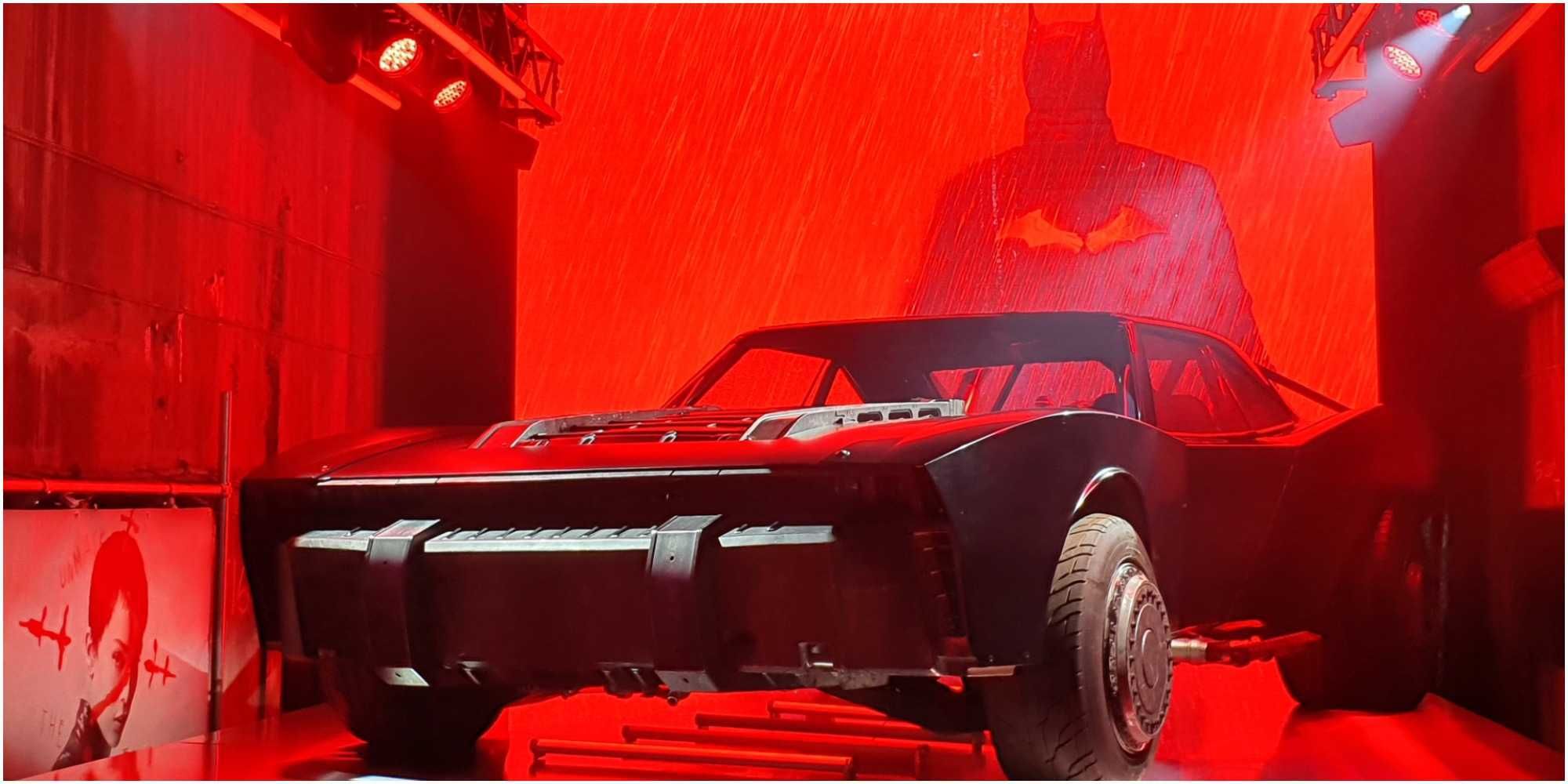 I have to say, the Batmobile looks a bit shit up close. It’s just so damn smooth. There’s some pretty cool stuff on it, like a battering ram and engine that looks like it could launch a rocket, but apart from that and some side steps – which add some nice texture but don’t seem very Batman. Does he need a little leg up to get in his own car? – it just looks like a normal car. I was expecting a custom monstrosity like the cars from Death Race, not Pixar’s take on Mad Max.

There is a lot of detail on the inside, which makes me think we’ll be getting some good close-up scenes right at the heart of the action. And I guess with most exterior shots most likely being at night or filmed at high speeds, the outside of the car doesn’t matter as much as the inside, but still, it feels like it missed an opportunity to tie together the rougher elements of the props. Also, this was the actual Batmobile used in the film, not an oddly smooth replica or one meant just for background shots. It’s a working car. 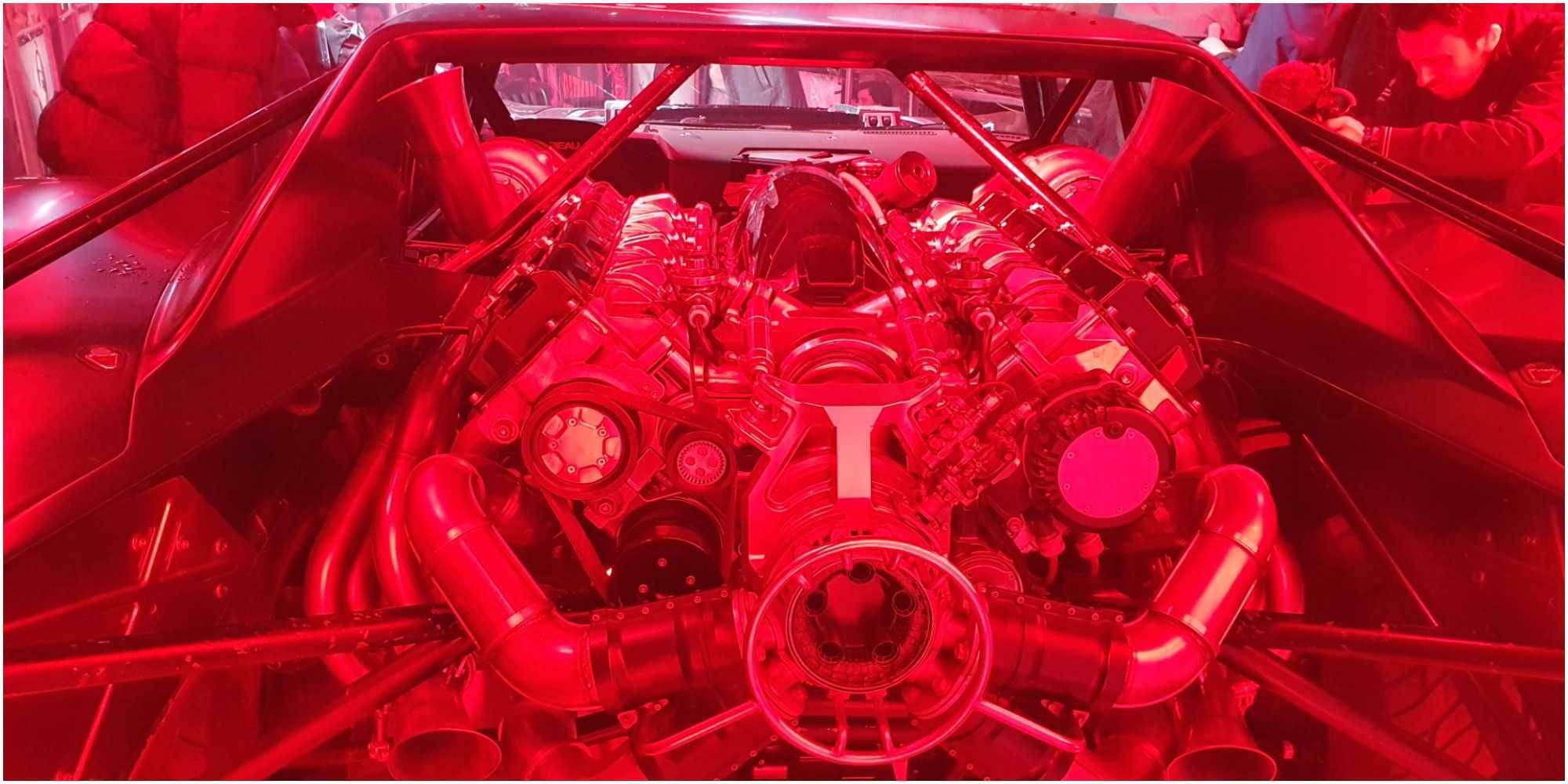 This Batmobile should look like a Charger with a rocket engine and armour thrown on, welded together by Bruce and Alfred in a cave or garage, but it looks far too polished – literally. The costumes are great though, and they’ll look brilliant shot from inside the car, which really stands out from the exterior. Despite the underwhelming vehicle, I like the direction the film seems to be going in. Grounded but not edgy feels like the perfect fit for Robert Pattinson’s first outing as Batman, and I hope it works when the film comes out on March 4.

Related posts:
03/01/2022 Reviews Comments Off on The Batman’s Batmobile Is A Little Too ‘Rich Boy’s First Mustang’
Hot News
PlanetScale announces new database analysis and performance features
Destiny 2 Brings Back The Leviathan In Season Of The Haunted
Sony Isn’t Honouring Stacked PS Plus Discounts In Asia
Desinty 2: Season Of The Haunted – everything you need to know
tribulus creatin muskelaufbau
Recent Posts